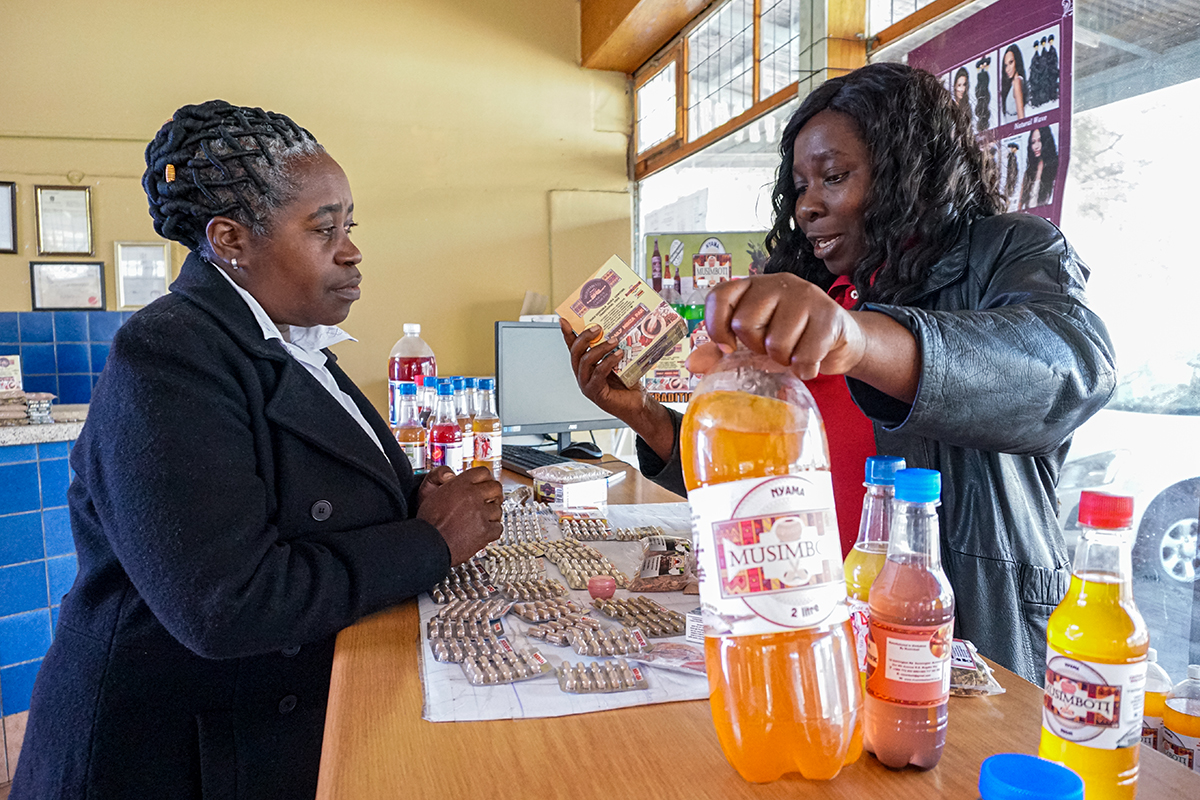 BULAWAYO, ZIMBABWE – Early in the morning, Melinda Tshuma, a receptionist, mixes up a concoction in her kitchen. She takes half a teaspoon of brown powder from a transparent plastic bag, combines it with warm water and gulps it down. She doesn’t know what’s in it, but she says it works.

“I have had severe period pains since I was a teenager,” she says. “I used to take lots of painkillers and place a hot water bottle on my abdomen, until I tried some traditional medicines.”

That was a year and a half ago, and she says she hasn’t looked back.

The powder used to cost her 10 Zimbabwean dollars (about $1.50).That one small package will last between two and three years, she says. It’s nothing compared to the 25 Zimbabwean dollars ($3.78) she used to spend every month on a box of 16 painkillers.

The use of traditional herbs and medicines is common in Zimbabwe, but the trend has increased over the past year as the country’s currency crisis has seen drug prices surge out of reach for many.

“We have seen a rapid increase in the number of people who are using traditional herbs and medicines due to the current economic situation,” says George Kandiero, president of the Zimbabwe National Traditional Healers Association.

Kandiero says the association is tracking the rise in demand by monitoring the number of people who visit their social media platforms for help, as well as the increasing use of their information hotline.

Traditional medicine is recognized as a formal part of the country’s healthcare system and is regulated by the Medicines Control Authority of Zimbabwe, the state body responsible for ensuring that treatments used by the public are safe. Herbalists and healers are required by law to register with the healers association or the Traditional Medical Practitioners Council. Those who practice without registering risk a fine or up to two years of jail time.

A 2013 study on traditional medicine practices conducted by South Africa’s University of Fort Hare identified 93 plant species which are used for medicinal purposes in south-central Zimbabwe. These plants are used to treat everything from gastrointestinal problems to colds, flu, sore throats and period pains.

Such plants and herbs are classified as complementary medicines by the Medicines Control Authority. But some herbalists say traditional medicine is sufficient on its own.

“I am not saying modern medicine does not work, but people should know that modern medicine came from these traditional herbs so there is nothing wrong with using herbs as they are,” he says.

“I use traditional and herbal medicines for minor ailments like colds, flu, gastric disorders and period pains,” she says. Consultations for these illnesses cost her 10 bond notes ($1), she says.

But when someone in her family suffered from a serious disease like HIV, malaria or cancer, she would take them to the hospital, where cancer treatment cost between 100-150 bond notes ($11-16) per visit.

Now she says she’s considering giving up drug-based medicine altogether because of the currency crisis.

“Medicines in pharmacies have become expensive due to the economic situation in the country,” Zondo says. “I will now be forced to use traditional medicine even for ailments which I would prefer to go to hospital for.”

Zimunya says he is seeing more and more people who are either unable to afford hospitals or are not satisfied with the treatment they receive there. Sithabile Dewa from Magwegwe, a Bulawayo suburb, is one of them.

“I went to the doctors when my three-year-old son seemed like he had suffered a stroke,” Dewa says. “At the hospital, they failed to diagnose any ailment and insisted on giving him an injection every day.”

She decided to consult a traditional healer after five days with no improvement. The healer gave her son some medicine to drink and some ointment to rub on his skin. Dewa says it worked and her son was well after about a week.

A consultation with a traditional healer was a tenth of that price.

“When I went to a traditionalist, I paid 20 RTGS dollars ($3) for consultation and another 20 for the medication I was given,” she says.

But not everyone in Zimbabwe is embracing traditional medicine, despite rising costs.

“Most of these traditional medicine and herbs do not have measurements or dosages,” says Tracey Ndlovu, who works at a local boutique. “I would rather be safe and use modern medicine.”

Editor’s Note: Fortune Moyo and Virginia Moyo are not related.