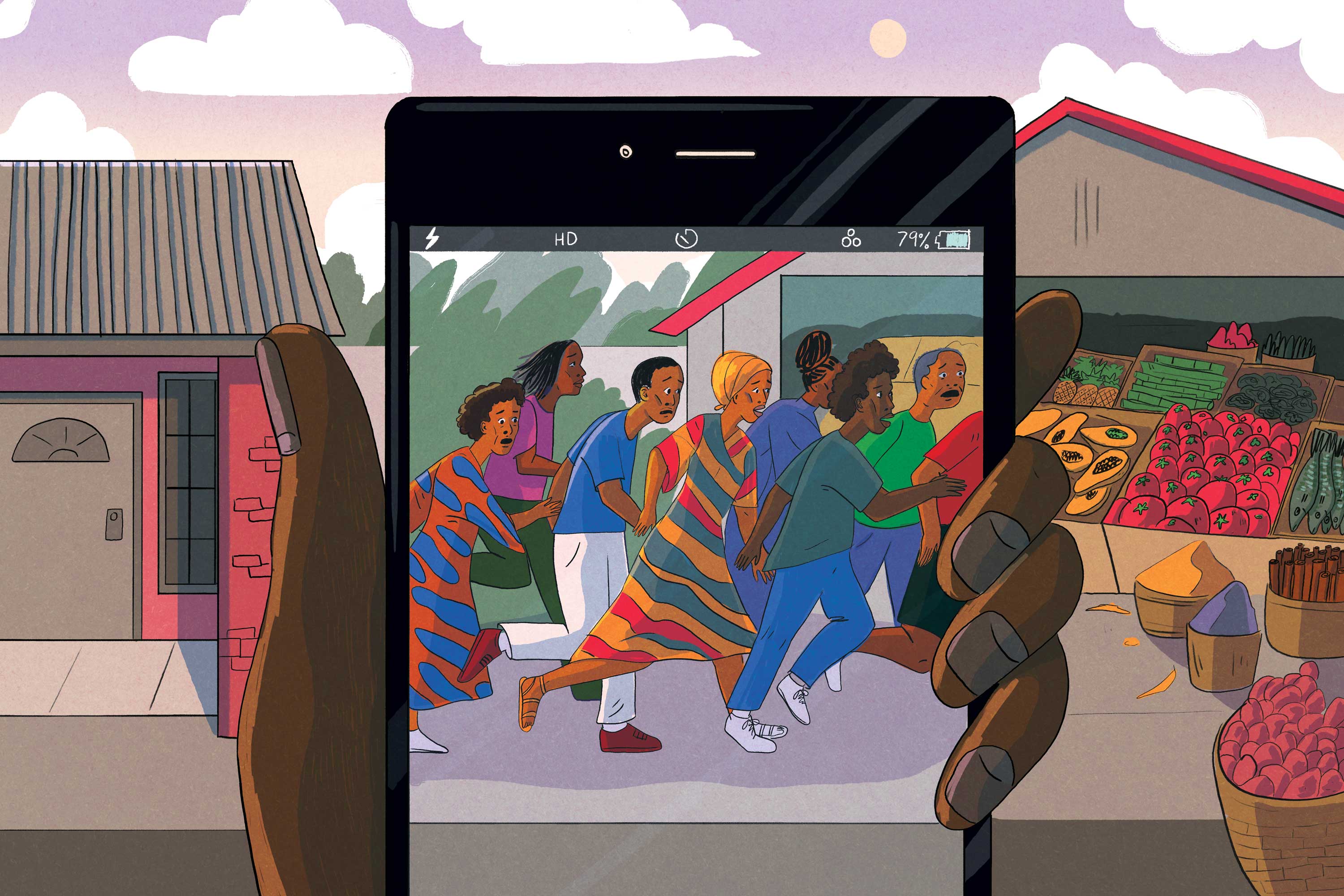 HARARE, ZIMBABWE — On Nov. 14, messages trickled in at first. But it wasn’t long before the trickle became a flood.

The truth remained murky for days, thanks in part to tight-lipped officials, but mostly due to the flood of fake news, doctored photographs and forged documents that flooded social media.

On WhatsApp and Facebook, two of the most popular social media platforms in Zimbabwe, some said the country was under siege. Photos of tanks rolling into Harare, the capital city, spread quickly. As rumors emerged that Robert Mugabe was under house arrest, wild theories melded with fact on social media.

As the political situation continues to unfold, it’s now clear that much of what circulated here over the past week was both misinformation and intentionally false.

“There was news circulating that there was now a war in Zimbabwe,” says Tariro Moses, 35. “l was told that soldiers were in town, but l had to come to town on my own so that l could verify, although l was afraid.”

Moses said it was days before locals got the real story via local radio.

An image of suitcases full of cash was widely circulated, misidentified as the result of a raid of a local official’s residence. BBC News later clarified that these images were first published about a police raid in Brazil months earlier.

Other kinds of misinformation, some provoking deep anger, were common.

Fake bulletins purporting to be from the Embassy of the United Kingdom suggested that the country was suspending all asylum applications from people of Zimbabwe, effective immediately. While quickly proven fake, it generated significant online vitriol.

Some residents were quick to react to each piece of unsubstantiated news, while others were wary of the flood of questionable information, some of which has led to panic in the recent past.

In September, the government introduced the Ministry of Cyber Security, Threat Detection and Mitigation in response to a series of WhatsApp messages that created widespread panic when rumors that the bond note, a form of legal tender introduced during the cash crisis last year, had reportedly just deflated. No such deflation had occurred and the rumors soon proved false, but they led to a food shortage lasting several days.

Admire Mare, a media and journalism lecturer at the University of Johannesburg, says that even though the messages about the deflation of the bond note were not true, Zimbabweans used social networking platforms to shed light on the reality of an unstable economy.

“Zimbabwean officials responded by scolding these people instead of releasing a statement to dismiss the claims and put people’s minds at peace,” says Mare.

Prior to the political uprising last week, experts suggested that the new ministry would provide security measures for online transactions, but many also anticipated that it would work to regulate the use of social networking platforms.

But the newly-appointed minister, Patrick Chinamasa, has not been formally sworn in, leaving the future of the new ministry in question as the larger political situation unfolds.

There are 6.7 million internet users in Zimbabwe, most of whom use their mobile phones to access it. Across Zimbabwe, social media usage is on the rise, with more than 850,000 Facebook subscribers and 5.2 million WhatsApp users, according to TechZim, an information technology local news blog.

In the past, Mugabe’s government responded to complaints on social networking platforms with threats, alleging social networking users of spreading rumors and misusing the services. According to a 2016 Freedom House report, users were unable to access WhatsApp for about five hours during anti-government protests in July last year. Advocates in the region worry that social media-led rumors, like the one that led to the September food shortage, are likely to provoke the government to crack down on social media usage, especially in the face of upcoming elections.

The new ministry did not make any statements about the use of social media during last week’s political upheaval. Representatives from the new ministry declined to comment for this story.

For citizens, the flood of fake news increased anxiety in the midst of the country’s first change in leadership since 1980.

“It was stressing because we had hope that the president was going to resign, and fake news of imminent violence was depressing,” says Melody Gwabi, 23, a student studying business management.

The primary consequence from the flood of fake news is that local media outlets lost credibility, says Dewa Mavhinga, a human rights lawyer.

“It has been a fake news galore, with people sending rumors and fake news on social media,” he says. “As a result, a number of journalists and media houses lost credibility for spreading fake news.”

It remains to be seen if the new government, which will be led by recently-fired Vice President Emmerson Mnangagwa, will keep the new Ministry of Cyber Security, Threat Detection and Mitigation in place. Mnangagwa is expected to serve the remainder of Mugabe’s last term. General elections are tentatively slated for late 2018.

“It is difficult to prevent situations like panic buying because if one person makes up a story and shares it on platforms like WhatsApp, it reaches hundreds of people who may respond with fear,” he says.

Gamuchirai Masiyiwa and Linda Mujuru, GPJ, translated some interviews from Shona to English.