Skip to main content
The story you are reading was published on Thursday January 26, 2017. To read more recent stories click here. 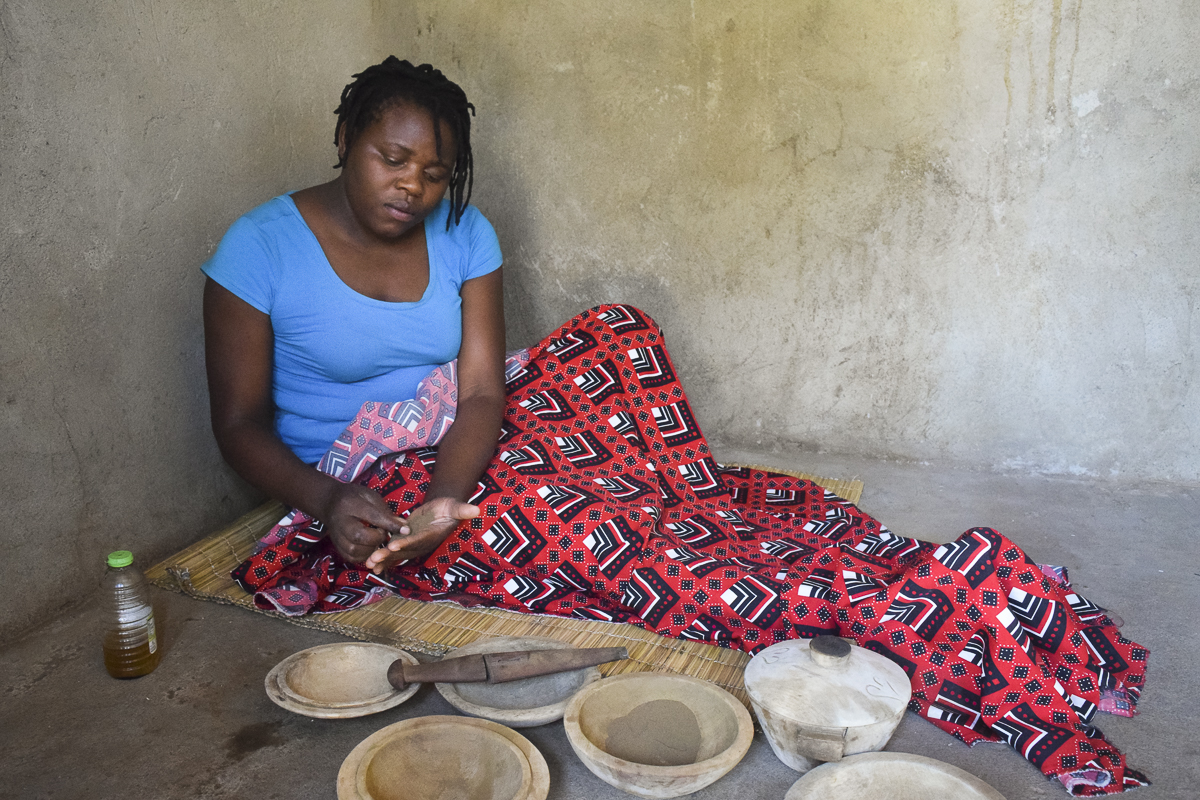 HARARE, ZIMBABWE — Memory Kuzonyei, 28, sits in a tiny rented room surrounded by three wooden basins filled with salt, snuff and water. A dagger rests on one of the basins. She is wrapped in the red, white and black cloth she wears when she connects with her ancestral spirit.

The dagger is used to destroy goblins — which are thought to be evil spirits made from human body parts and herbs — and snakes, she says. Kuzonyei says she has destroyed goblins and snakes several times.

Kuzonyei keeps another white cloth, which symbolizes purity, stashed in the tiny room for when she needs to connect with her mermaid spirit.

Outside the room is a line of people, sitting in the scorching sun, all waiting for Kuzonyei. She’s been healing sick and barren people here since 2011, and she’s also known for solving marital and financial problems.

Kuzonyei is a traditional spiritual healer, a profession that’s regulated by the government in Zimbabwe. Here, it’s common for people to seek spiritual healing and intervention for misfortunes that medical doctors are unable to heal or detect.

Kuzonyei’s business is booming, but as the nation endures an increasingly bleak economy, other healers say their patient numbers are declining.

“People are no longer coming as they used to, because of the harsh economic conditions, and are resorting to seeking help in churches, where they are not charged any fee for consultations,” says Sophia Machaka, a healer.

Healers usually accept various forms of payment, including goats and other animals.

People are no longer coming as they used to, because of the harsh economic conditions, and are resorting to seeking help in churches, where they are not charged any fee for consultations.Sophia Machaka, a traditional healer in Harare, Zimbabwe

There are about 55,000 traditional healers in ZINATHA’s nationwide network. ZINATHA doesn’t have formal statistics regarding the number of people those healers treat, but Prince Sibanda, ZINATHA’s education secretary says healers, on average, see 50 people per day.

Some Pentecostal pastors and prophets, who lead a growing religious movement in Zimbabwe, warn their church members to avoid traditional healers, whom they associate with evil spirits. That has led to a decrease in the number of people who visit spiritual healers, ZINATHA members say.

Meanwhile, some pastors say more people are filling church pews to seek healing there instead of through traditional healers. But that doesn’t mean they’re faithful Christians, some say.

Nicholas Nyahora, a deacon at Winners Chapel International, a Pentecostal church in Harare, likens traditional healers to Elymas, a sorcerer in the Bible who performed miracles by using evil powers.

“People who go [to traditional healers] are not Christians, but mere churchgoers, because Christians know where to go when they need spiritual healing,” Nyahora says.

An estimated 84 percent of Zimbabweans profess to be Christians, but traditional healers say many of those people still seek their services. Tichakunda Bote, a traditional healer, says he works late hours because Christians visit him under the cover of darkness. Whether at church or in a healer’s office, Bote says, the God they seek is the same.

“We also believe in God, but what is different with Christians is the methods that we use to reach to God,” he says.

We also believe in God, but what is different with Christians is the methods that we use to reach to God.Tichakunda Bote, a traditional healer in Harare, Zimbabwe

Dr. Virginia Masunda, who is based in Harare, says herbs and treatments, such as incisions, from a traditional healer could interfere with conventional medications. But she acknowledges that traditional healers can complement the work of Western-trained doctors, especially for mentally ill patients.

“When they go to a traditional healer who addresses their problems centered in their cultural beliefs, and they believe in it, that in itself can psychologically help them become a bit stable, because the spirits have been appeased,” she says.

Kuzonyei, the healer who claims to have a mermaid spirit, says her businesses is booming, and her patients include church leaders.

On her busiest days, Kuzonyei says, she sees 150 people, usually for just a few minutes each. On most days, she says, she sees about 40 people. She adds finely ground tobacco to water and tells clients to bathe in it to drive away bad spirits. She adds eggs to water and tells clients to bathe with them, then boil them and eat them without salt. This process washes away bad luck that keeps a person from getting married, she says.

“A lot of people from different walks of life come to seek my services, and at times I am overwhelmed with the turnout,” she says. “Even church leaders come to me to get more power so that more people come to their churches.”

Kuzonyei’s consultation fee is $3, but some intense problems require a $50 payment. She even consults over the phone for people who live abroad, most of whom send gifts as their thanks.

Kuzonyei says she began cultivating her healing powers when she was 10 years old, when mermaids took her from a riverside where she was fetching water near her rural home. She says she lived with the mermaids, in the marine world, for five years.

A lot of people from different walks of life come to seek my services, and at times I am overwhelmed with the turnout. Even church leaders come to me to get more power so that more people come to their churches.Memory Kuzonyei, 28, a traditional healer in Harare, Zimbabwe

“I had been sent to fetch water by my mum, and a whirlwind came and took away my container, and after that, I only saw myself under water, and did not really know how I got there,” she says.

Now, Kuzonyei says, she has two spirits that she uses interchangeably to help people with different problems. Her mermaid spirit is called shavi renjuzu in the Shona language, and her second spirit, that of her great-grandfather, is called mudzimu in Shona. She says both spirits possessed her when she returned to land from the marine world.

For some patients, Kuzonyei’s work is literally lifesaving.

Shupikai Chisenga says she didn’t believe in traditional healers until her son was attacked by goblins in 2014. The 22-month-old boy was dead, Chisenga says.

“He had no pulse and could not move or breathe,” she says. “He was literally dead.”

Neighbors even came to pay their respects. 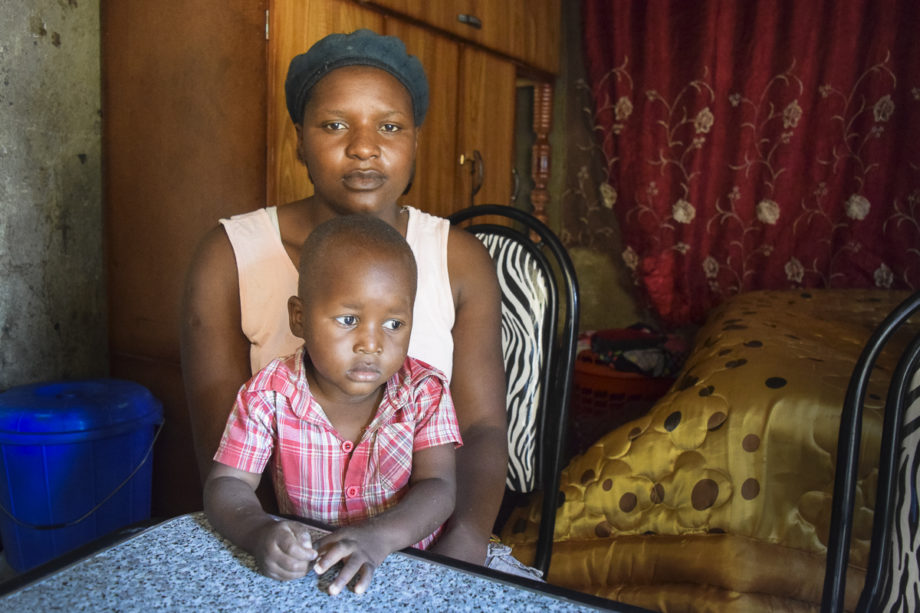 Shupikai Chisenga says her faith in traditional healers was restored when Memory Kuzonyei healed her son, Junior Chisenga, who is now 3.

Kuzonyei says she used her mermaid spirit to exorcise an evil spirit by bathing the boy in tobacco, and he instantly came back to life.

Prince Sibanda, ZINATHA’s education secretary, says healers will always be in demand, because they address both physical and spiritual needs. And if a client requires conventional medical treatment, a healer will refer that person to a hospital, he says.

“There is misinterpretation with regards to who we really are. We are labeled as witches, but this is not so,” he says. “We are healers fighting against witchcraft. Our mandate is to heal.”

Gamuchirai Masiyiwa, GPJ, translated some of the interviews from Shona.