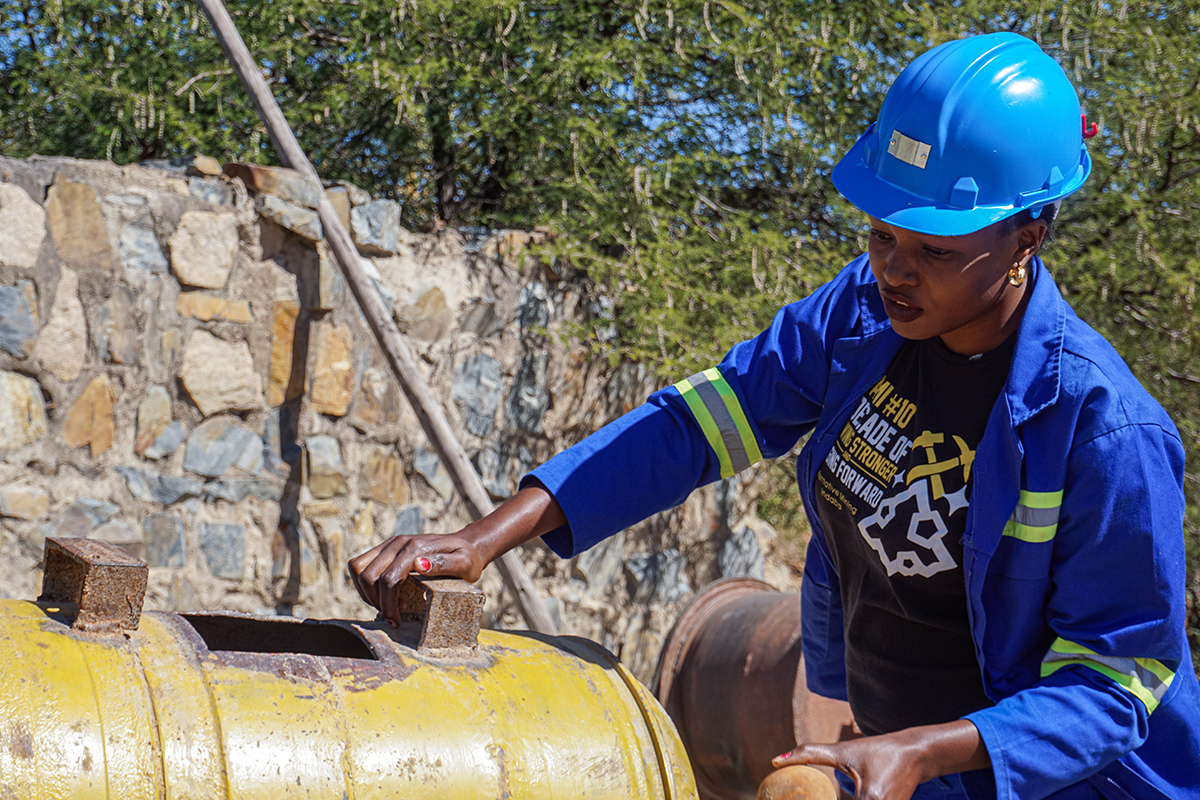 ZVISHAVANE, ZIMBABWE — For Sophia Takuva, mining is in the blood.

Her grandparents, her father and her brothers and sisters are all gold miners. Now, Takuva, 31, oversees daily operations at both her grandmother’s and her father’s mines. It’s a job she’s had for the past four years. On top of that, she’s secretary of the Zvishavane Women Miners Association.

But she hasn’t been able to open a mine of her own.

A year ago, Takuva applied for a license to do that, but she hasn’t received one yet. She knows of women who have waited for more than three years, she says. And although she can’t prove it, she believes that applications are held up much longer for women than they are for men.

Women make up 10% of Zimbabwe’s 535,000 artisanal and small-scale miners, according to a report from the Pact Institute, a Washington, D.C.-based development nonprofit. And the obstacles they face in the industry are considerable.

So in 2018, Takuva and her peers set up the Zvishavane Women Miners Association to help women take on those challenges. 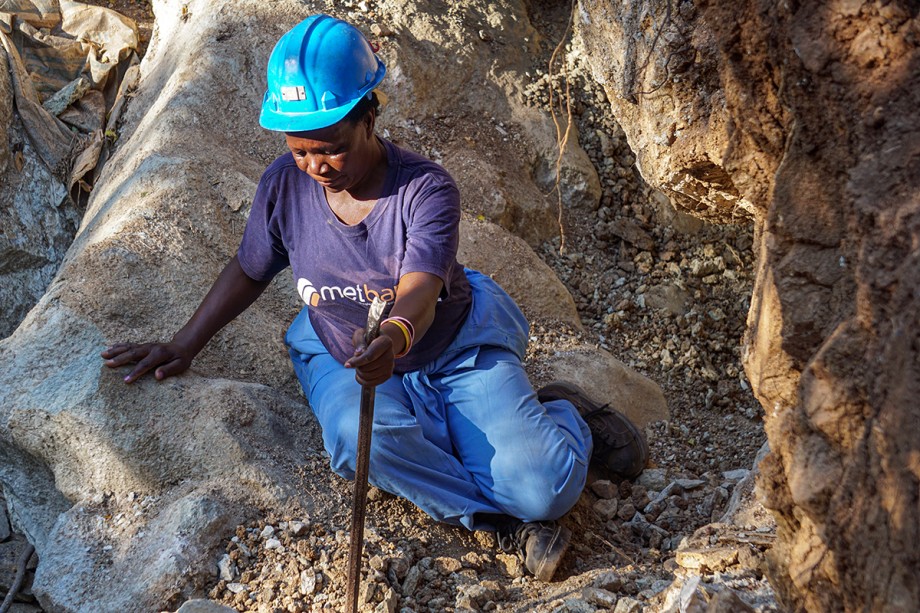 Shuvai Mutami co-owns a mine with her husband. It can be hard for women to get mining licenses in their own right, as the collateral required for a loan is often registered under their husband’s name.

The association comprises dozens of women from different parts of Zvishavane and Mberengwa, a small, active mining town 32 kilometers (19.8 miles) away. A small proportion are registered small-scale miners who mine gold or chrome. The rest are artisanal miners – lone workers who often mine illegally or without adequate machinery – who hope to get into established small-scale mining.

“We learn from each other every day,” says Beauty Hove, a gold and chrome miner who owns a grocery shop on the side. “I cannot compare myself to men, because our circumstances are different, but when you hear about the success of a fellow female miner, you are motivated and inspired, and you know that you can also get there.”

Artisanal gold mining was illegal in Zimbabwe from 2006 until 2013, though that didn’t prevent individual miners from selling to the black market during that time.

In 2014, the government opened up its gold-buying facility, Fidelity Printers and Refiners, to small-scale and artisanal miners, in addition to the large companies that had previously dominated the sector.

Two years later, Fidelity Printers and Refiners set up a specific loan facility to support the production of gold by small-scale miners – the Gold Development Initiative Fund. The government set aside $20 million of the $150 million fund specifically for women miners, including provisions for training at the Zimbabwe School of Mines. The government has since said it is working on incorporating other minerals like platinum and chrome into the loan fund.

Mukasiri Sibanda of the Zimbabwe Environmental Law Association (ZELA) says allocating part of the fund to women is a step in the right direction, but isn’t sufficient to address the problem.

“What is the rationale of setting aside $20 million from $150 million in a bid to support gender equity?” he says. “Does this not mean that the remaining facility is for men?”

Distribution of the fund has been poor – a spokesperson for Fidelity Printers and Refiners told GPJ that only 10% of the $20 million has been given out so far.

In addition, Takuva says the process of applying for a mining license in Zimbabwe isn’t inclusive. To get one, an applicant must first get a prospecting license, which costs $200. This license is supplied instantly so that the recipient can search for an area to mine.

Once a site is identified, the miner then must get an agent or approved prospector from the Ministry of Mines and Mining Development to peg out a mining plot for a fee of $350. From there, a certificate is issued. That costs another $200.

I cannot compare myself to men, because our circumstances are different, but when you hear about the success of a fellow female miner, you are motivated.Beauty Hove, a member of the Zvishavane Women Miners Association

Takuva says most people need to take out loans to cover these fees. But to get a loan, they must put up property as a security. That’s not realistic for many women.

“Collateral has always been an issue and remains an issue particularly for married women, who often do not have properties in their names but that of their husbands,” says Apolonia Munzverengi, the Minister of State for Mashonaland East Province.

Or, as in Takuva’s case, they’re single and don’t own property at all.

“Women who have support from their spouses can take their chances,” says Nomalanga Dube, Provincial Chair of the Zimbabwe Miners Federation. But those who don’t have that support often just give up, Dube says.

Even if they do get a license, many miners often don’t make enough to live comfortably.

“Imagine you are given a loan of $15,000. You need a compressor, pump, generator, explosives, diesel and security personnel,” Takuva says.

That money might get a miner started, but it’s not enough to pay workers and other expenses and still make loan payments, she adds.

There are often disputes over who has a license to manage a plot of land, which are allocated manually. Women usually lose out to men in such disputes, says Takuva.

As part of her role at the Zvishavane Women Miners Association, Takuva says she recently had to intervene in a case where a man with a prospecting license moved onto a mine owned by a woman. Without any proper proof of her sole ownership, however, the woman had to agree that they would mine the land together.

Sibanda, the officer at ZELA, says a computerized system would help avoid such situations. The latest national budget allocated $1.8 million for the computerization of the title system. Sibanda says ZELA has vowed to monitor this process.

For all the positive rhetoric about women’s empowerment Takuva hears from industry leaders at seminars and conferences, she says the reality for her peers is vastly different. Amid all the talk of land plots, machinery and earnings at the Zvishavane Women’s Miners Association, there is always an unspoken problem that haunts the discussions in the group – that of sexual abuse and exploitation.

“It’s real,” Takuva says. “Many women we know have experienced it. It’s just one of those things that is difficult to talk about.”

She says women are harassed and abused at all stages of the mining process – by men who involved in the licensing process, by strangers in the bush during prospecting, by men who want to muscle in on their mines and by police who request sexual favors to look the other way over mining violations.

“When you get to the ground, you realize that it’s not as simple as they make it sound – we are yet to feel the empowerment from our leaders,” she says. “Being a woman in this male-dominated industry is not for the faint-hearted.”

Correction: An earlier version of this story incorrectly stated the proportion of women miners in Zimbabwe. Global Press Journal regrets the error.