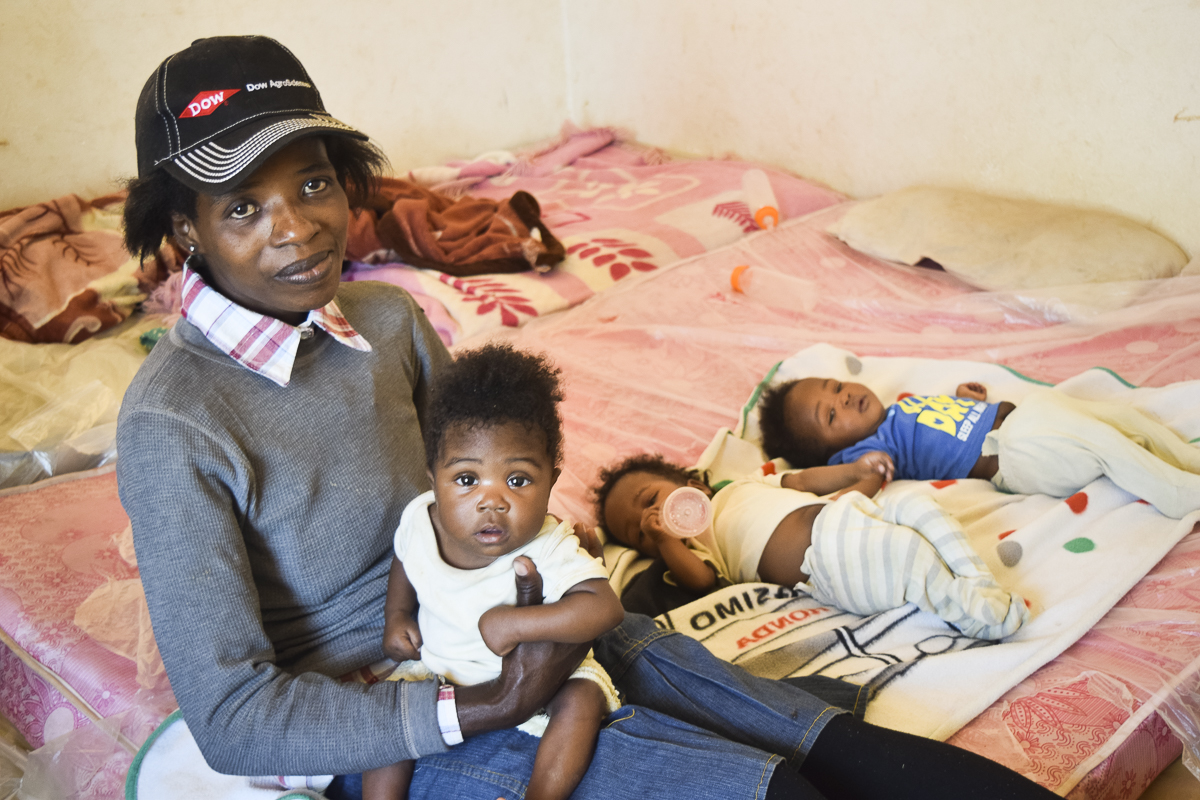 BULAWAYO, ZIMBABWE — It was Dec. 20, 2015, and Khonza Dlodlo, 35, had no idea that her expanding belly contained more than one baby. She received prenatal care throughout her pregnancy, but could not pay $50 for a scan.

“The first baby came out while I was still at home,” she says. “When we arrived at the hospital more than an hour later, I was told to push, as there were two more babies inside.”

The triplets were born prematurely, after just eight months in utero. Dlodlo says they might not have survived but for Baby Heroes Africa, a four-year-old nonprofit based in Bulawayo, Zimbabwe’s second-largest city.

“They brought preparation sets for my babies and have been assisting me with formula milk as well as Cerelac,” Dlodlo says, referring to a baby cereal. “They truly are a godsend.”

They truly are a godsend.Khonza Dlodlo, 35, a mother of triplets, describing Baby Heroes Africa

Baby Heroes Africa works to ensure that preterm babies survive. The organization gives care packages to women like Dlodlo, and has donated lifesaving equipment and other supplies to Mpilo Central Hospital in Bulawayo. Through its Sacred Breath campaign, the organization in 2015 donated three bubble Continuous positive airway pressure (CPAP) machines, together valued at $7,500, and a Firefly machine worth more than $1,000.

A CPAP machine is “attached to the nostrils to increase oxygen delivery to the lungs while reducing the work of breathing and preventing lung collapse.” Without it, a premature baby works hard to breathe and sometimes gets too tired and dies. The Firefly machine is used to treat babies with mild to severe jaundice.

“These are machines we used to read about in the books, but now we have them,” says Sister Sihle Ndebele, who is in charge of the hospital’s neonatal unit. “Prior to the donation, we had 10 regular machines which, apart from being old, had limited power.”

Mpilo Central Hospital is among the largest public hospitals in Zimbabwe.

“We used to get stuck, not knowing what to do when we had more babies in need of the machines,” Ndebele says. “Baby Heroes [has] changed the story of this ward.” 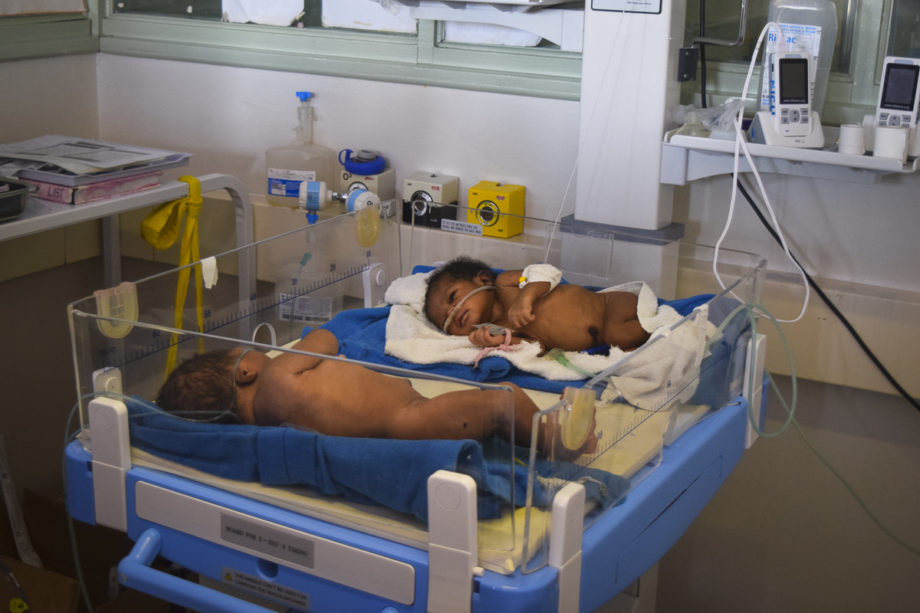 Babies lie in an incubator at Mpilo Central Hospital. The hospital has received assistance from Baby Heroes Africa.

Dr. Wedu Ndebele, a consultant pediatrician at Mpilo, says the impact of the machines, including an estimate on the number of babies saved because of the machines, will be known once annual reports are completed.

Baby Heroes Africa also gives mothers of premature babies essential supplies, including diapers, cotton, towels and blankets. Those supplies, as well as cash to buy more, are donated to Baby Heroes Africa’s Bundles of Joy Project under the “Siza Ngothando” (help with love) initiative, which seeks to intervene for and contribute toward the well-being of socioeconomically disadvantaged preterm babies and their mothers.

We used to get stuck, not knowing what to do when we had more babies in need of the machines. Baby Heroes [has] changed the story of this ward.Sister Sihle Ndebele of Mpilo Central Hospital

According to the World Health Organization, an estimated 15 million babies are born too early every year. Zimbabwe, as of November 2015, had the fourth highest rates of preterm births globally, with 16.6 babies out of every 100 babies born too early.

CPAP machines make a significant difference for those babies. In Malawi, CPAP treatments increased survival rates for babies from 24 percent to 67 percent.

Chengetai Makuni, a 31-year-old mother of one and director and cofounder of Baby Heroes Africa, says her own experience of birthing a premature infant in 2012 at a private hospital prompted her to start the organization. The emotional and financial challenges she faced as a mother of a baby who came early were significant, she says.

Her son is now 4 years old.

“More than anything, I realized I knew nothing about my situation,” she says. “This included how to take care of my baby or what to expect.” 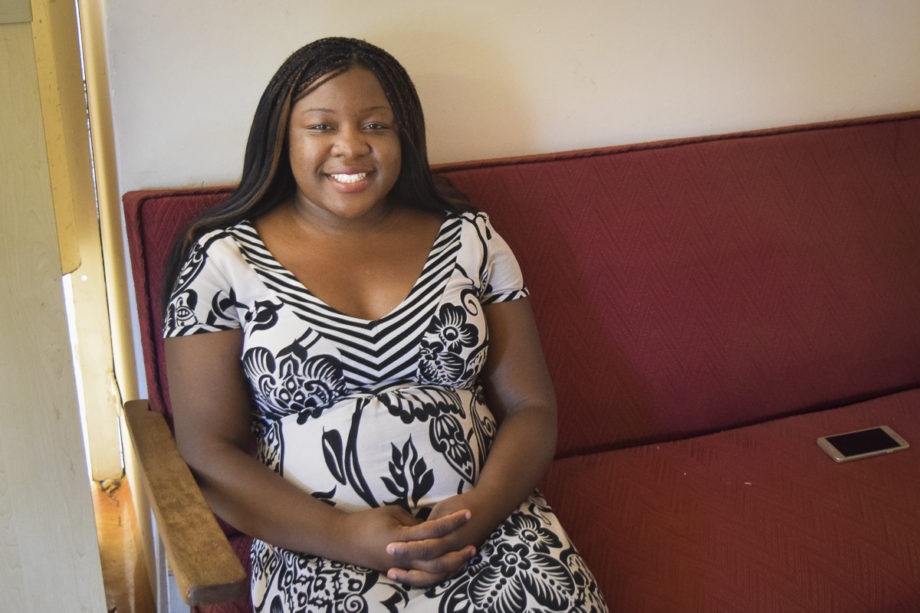 Chengetai Makuni is the founder and co-director of Baby Heroes Africa. She started the organization after birthing a premature infant.

Makuni’s partner, Dr. Norbetta Washaya, a pediatrician based in Cape Town, South Africa, where she has a medical practice, has experience working with preterm babies. Their office is Makuni’s home, and they have a staff of four people as well as many volunteers. Most of their funds are raised through events and pledges.

Dr. Prince Ziyera, head medical officer for pediatrics at Mpilo Central Hospital, says Baby Heroes Africa has changed the lives of premature babies there. He says deaths due to respiratory distress syndrome are a problem globally, and more common in medical institutions with limited facilities.

“Baby Heroes are doing great things for us,” he says. “Caring for preterm babies can be very expensive, and most parents cannot afford it.”

Baby Heroes Africa is unique in its approach of recognizing the needs of premature babies, Ziyera says.

Baby Heroes are doing great things for us. Caring for preterm babies can be very expensive, and most parents cannot afford it.Dr. Prince Ziyera, head medical officer for pediatrics at Mpilo Central Hospital

“When we speak about child mortality, we emphasize deaths due to HIV, diarrhea, pneumonia, malnutrition and malaria, but we forget deaths that come as a result of challenges associated with preterm births,” he says. “More so even, our culture does not mourn these young babies. Baby Heroes [is] doing a good job in recognizing them.”

In some cultures in Zimbabwe, stillborn babies and those who die soon after birth are not mourned and are buried quietly.

It’s not right for the government to fight alone, she says, adding that the community needs to get involved in saving the lives of preterm babies.

Vimbai Chinembiri, GPJ, translated some interviews from isiNdebele and Shona.