Although a border between the two countries exists here, a product of the 1891 Anglo-Portuguese treaty, there is nothing to indicate a demarcation or a crossing point, except the presence of soldiers and police.

The women speak momentarily to the soldiers, then they proceed on the dusty paths that lead into Mozambique. Ordinarily, no one is supposed to cross the border at this point. But the women have paid a fee to facilitate their crossing. It’s not a legal transaction, but so normalized that it occurs in the open. Locals say it costs about $2 to cross in and out of Zimbabwe.

Despite official border points for regulated crossings, this illegal movement in and out of Zimbabwe along the porous border is common. Many travel to Mozambique to buy cheaper basic commodities, such as rice, fuel and cooking oil. Those from Mozambique cross over to buy commodities sold at cheaper prices in Zimbabwe or to seek services in hospitals and schools. It’s a strong cross-border ecosystem which has allowed border communities to navigate economic hardships brought about by the pandemic and other social and political forces that have rocked both countries. But for Zimbabwe, this has strained the border region’s already struggling health care system, widened space for criminal activities and led to a bleeding over of cultural practices that can harm the environment, such as charcoal production.

The situation demonstrates the consequences of colonial borders — which remain difficult to control years after they were implemented — on local communities in both countries that share social ties through language, marriage and ancestry.

Just a few miles from the illegal crossing point into Zimbabwe’s Chipinge district is Mount Selinda Mission Hospital. Dorcas Mhlanga traveled 25 kilometers (about 15 miles) to give birth. She lives in Mufudzi, a border village in Mozambique, and has crossed into Zimbabwe illegally.

“I came here because it’s nearer to my home, plus I preferred this hospital compared to the one in Espungabera in Mozambique because the services here are better,” she says. 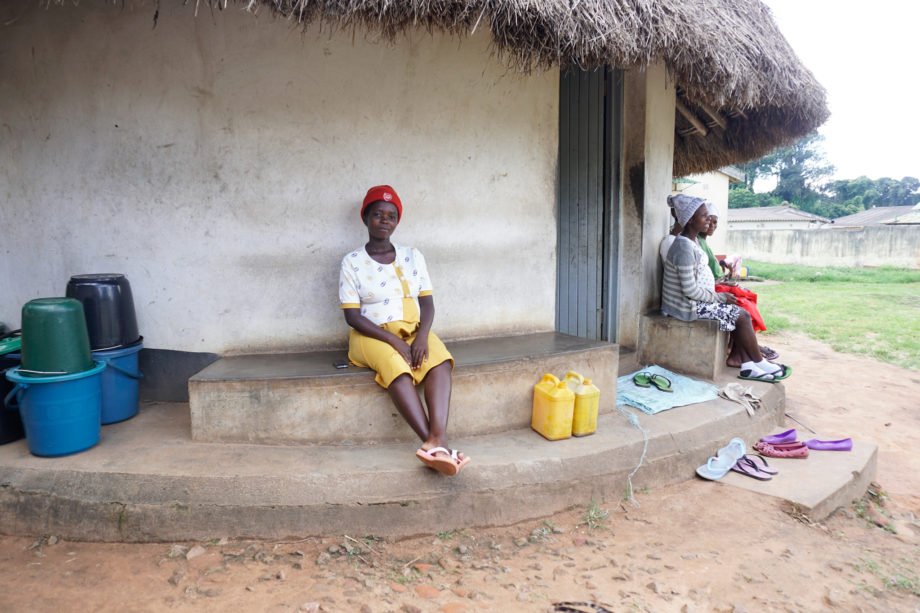 Dorcas Mhlanga traveled to Mount Selinda Mission Hospital in Chipinge, Zimbabwe, to receive medical services. She says the services here are better than in Espungabera, Mozambique, where she is from.

Like most Mozambicans who now seek health care services in Zimbabwe, particularly at Mount Selinda Mission Hospital — the only major hospital in this border region — Mhlanga is hesitant to confirm her nationality. If she does, she worries the hospital will charge her more in maternity fees. “Even when our family members get sick, they come here for treatment,” she says.

Tension and unrest across Mozambique, which started in 2013 between the Mozambican National Resistance Movement and government forces, has put a strain on the country’s economy, weakening its systems, including health care infrastructure, according to the World Health Organization. Less than half of Mozambique’s population has access to health care services, with just three doctors for every 100,000 people. 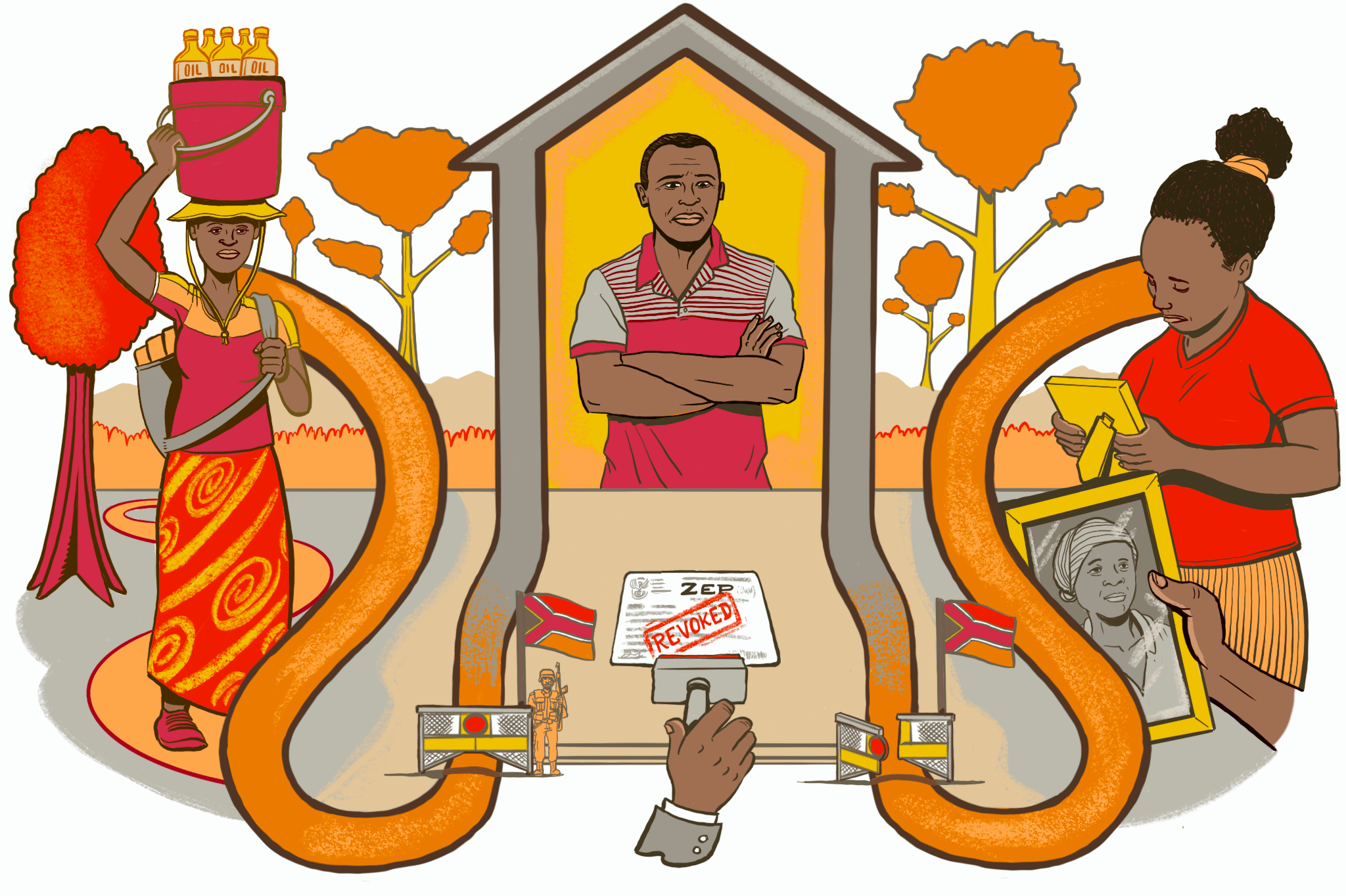 But in Zimbabwe, the economy is declining and systems are similarly strained. Public hospitals, once robust in the 1980s, now lack equipment and medicine, as well as trained and motivated health professionals.

To stay operational, the hospital relies on patient fees, Sithole says. “But these are very small because most of the services are free.” The hospital also receives support from the Ministry of Health and Child Care, which disburses funds based on the recorded population of Zimbabweans in the area, and even that is barely enough to serve the current population of around 15,000 Zimbabweans in the area, Sithole says.

Despite the strain, the hospital provides health care to those who seek its services, whether they are Zimbabweans or not. They are a church institution, Sithole says, and can’t turn people away. 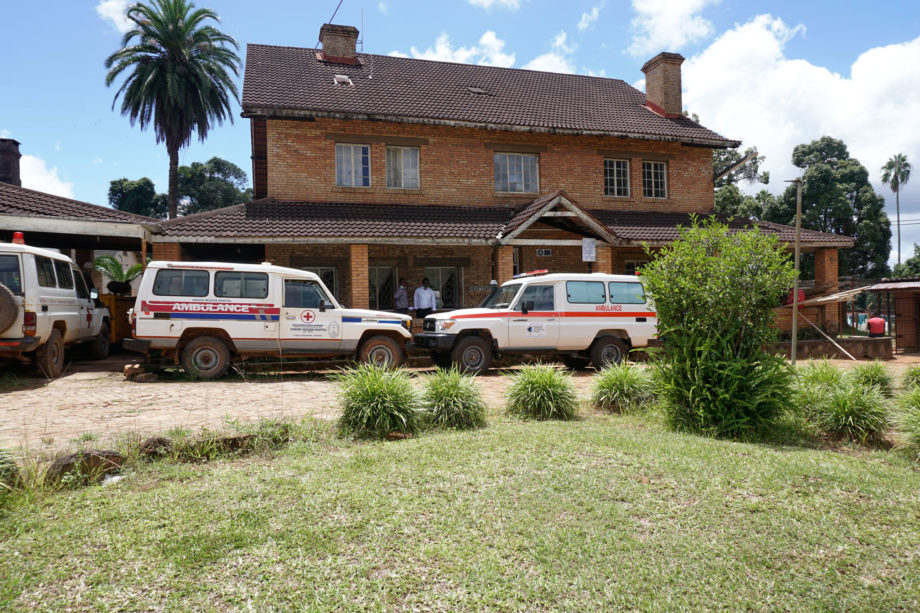 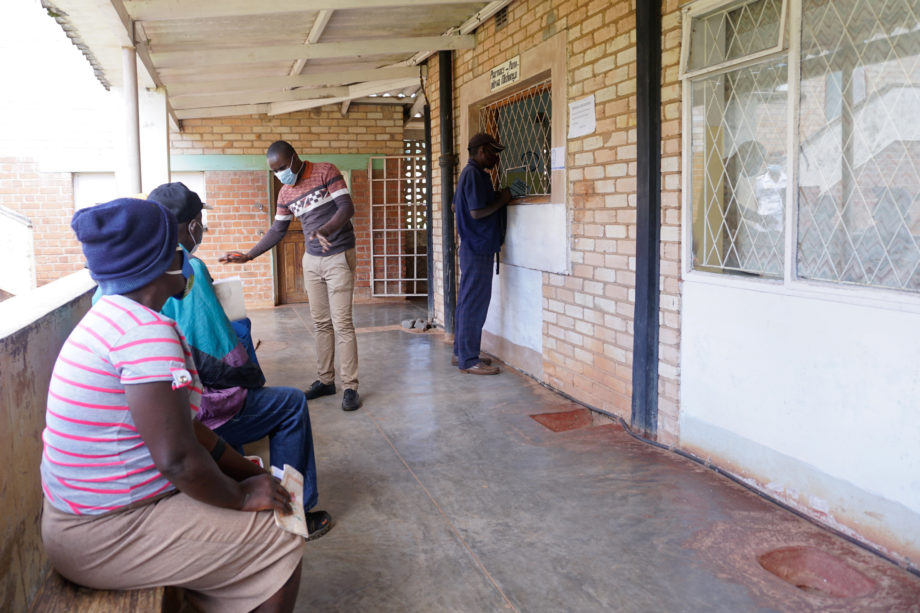 The situation extends back to the colonial period, says Francis Dube, a scholar of public health in this region and associate professor of history at Morgan State University in the United States.

Dube, in a written response, says that during the colonial period, Zimbabwe had a more robust health care system than central Mozambique. Africans on the Mozambican side of the border frequently sought health care services in Zimbabwe, and Portuguese officials in Mozambique, which was a colony of Portugal, regularly issued permits to Mozambicans to seek health care in Zimbabwe.

Although there isn’t much recorded data to capture the current scale of patients coming from Mozambique to Zimbabwe for health care services, past studies show the influx can be massive. Local health clinics saw a surge in patients in 2016, for example, after thousands fled the conflict between the Mozambican National Resistance Movement and the Mozambique government to find refuge in Chipinge. Before the influx, the Mabee clinic in Chipinge served about 900 patients a month, but that number spiked to 2,000 to 3,000 a month after the conflict began, overwhelming the clinic, according to a report by the Chipinge District Civil Protection Committee. 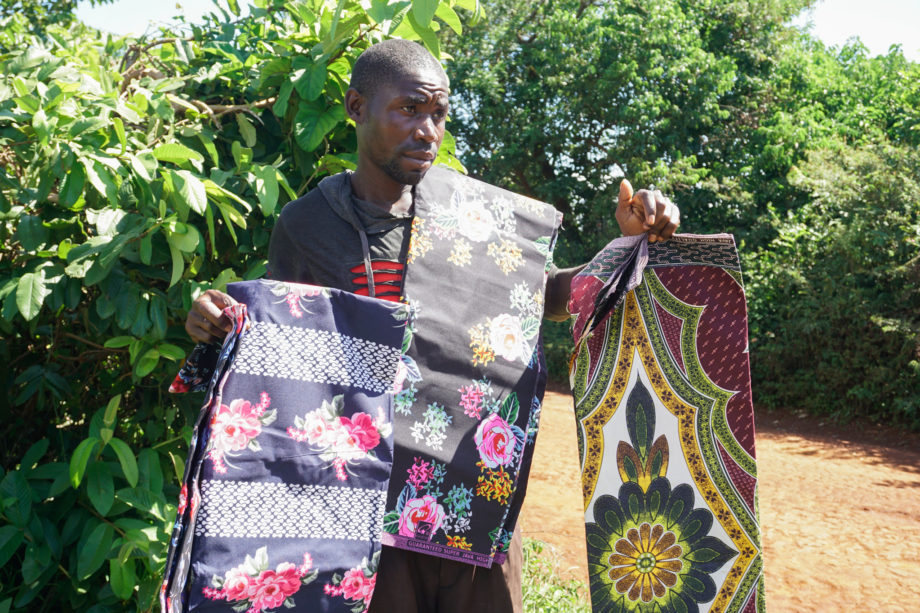 Rustling and Smuggling on Rise

The porosity of the border has also fueled cross-border criminal activities. Locals and authorities say that cattle rustling and smuggling have become more rampant. Cattle are easily herded to Mozambique and illegal goods are easy to transport in and out of Zimbabwe.

Fungai Sithole Mananga has been a casualty of livestock theft. He had left home in 2021 to look for employment in Johannesburg, South Africa, when he received word that his two cows had been stolen. “My wife told me that they had followed the footprints of the cows and discovered that they had been transported through the porous border points,” he says.

Andrew Masheedze, headman for Masheedza village in Mount Selinda, says many people have fraudulently acquired identity documents for both countries, which makes it difficult to trace criminals. Masheedze has also had cows disappear from his kraal, an enclosure for livestock. “I traced the footprints of my cows from my kraal across the Zona border post,” he says. He never found them. 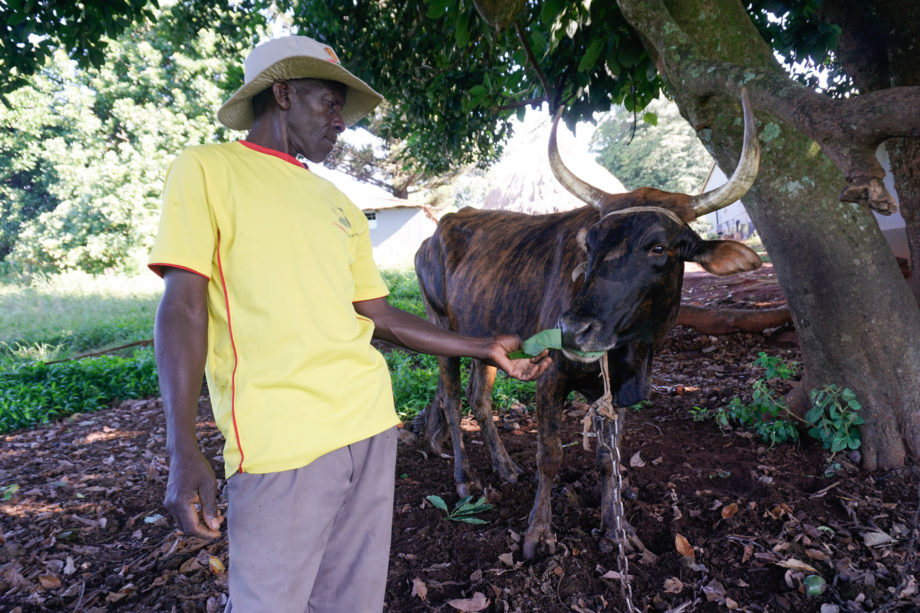 Andrew Masheedze, headman for Masheedza village in Mount Selinda, feeds one of his remaining cows. The rest were stolen, and he suspects they were taken to Mozambique.

Illegal commodities are also easy to smuggle into Zimbabwe. For example, the Zimbabwean government mandates that fuel sold to motorists be blended with ethanol. But some motorists prefer regular unleaded fuel as it lasts longer. It’s possible to purchase this fuel in Mozambique and sell it in Zimbabwe, says an attendant at a fuel station in Mount Selinda who asked to remain anonymous for fear of losing her job.

Tadious Ngadziore, Ward 19 councilor in Mount Selinda, decries corruption at the border. “Those who are supposed to guard the border sort of legalize the illegal crossing of people by asking for bribes,” he says. But the police face some challenges, he adds. It’s difficult for authorities in Zimbabwe to investigate a crime once the perpetrators cross the border.

The police in Zimbabwe are aware of the situation, says assistant police commissioner Paul Nyathi, and have been conducting investigations. They’ve arrested several people who were smuggling goods into the country and attempting to bribe border officials. They also have carried out a special operation, “No to Cross-Border Crimes,” which has proven successful in bringing those involved to account, Nyathi says.

The Embassy of Mozambique in Zimbabwe didn’t respond to requests for comment. 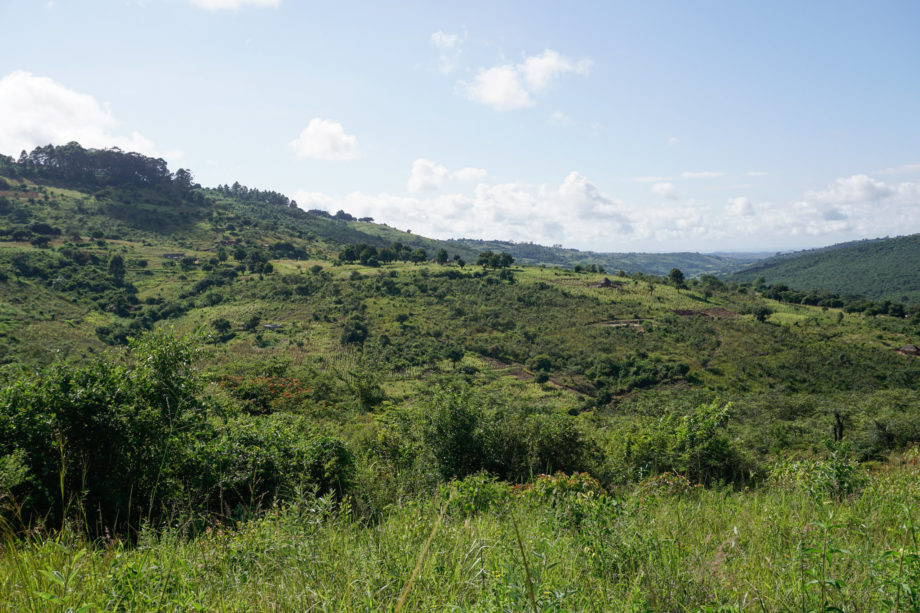 The view from Masheedza village in Mount Selinda, Zimbabwe.

Charcoal burning is common in Mozambique, where over 70% of the urban population depends on charcoal as a source of energy. Some say the ease of movement between the countries is why charcoal burning has now spilled over into Zimbabwe.

There has been a noted increase in charcoal production in the region, says Blessing Matasva, director of Green Institute Trust, a community-based organization that advocates for the preservation of the environment in Manicaland province. Although it’s in response to domestic electricity challenges and livelihood issues, he still sees a cross-border connection. “We have seen that some of the traditions were borrowed from Mozambique,” Matasva says.

John Muranda, who moved with his family to the Mount Selinda region in search of a better life and land to farm, says he learned how to make charcoal from his neighbors in Mozambique. He started making it from indigenous trees in the area to eke a living. “We do it for survival,” he says. 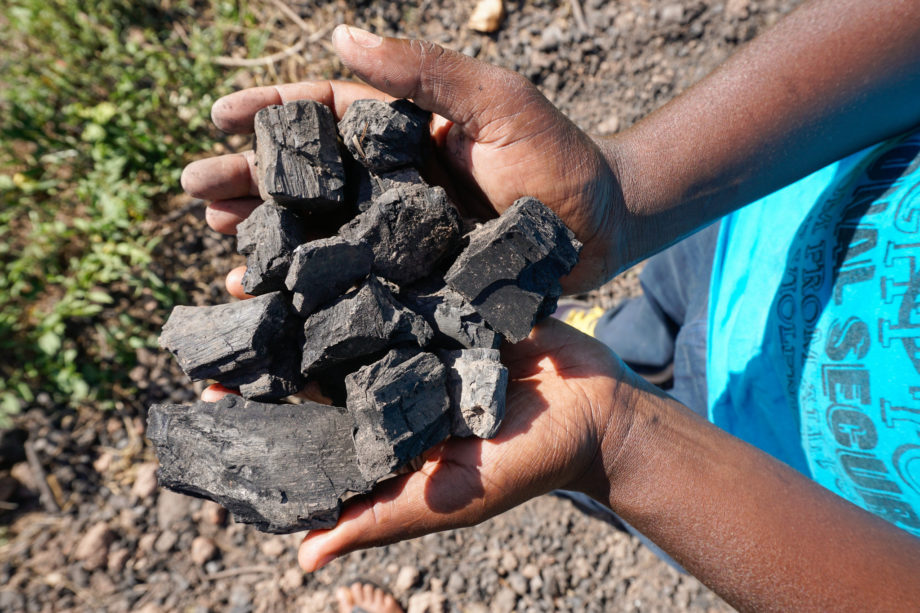 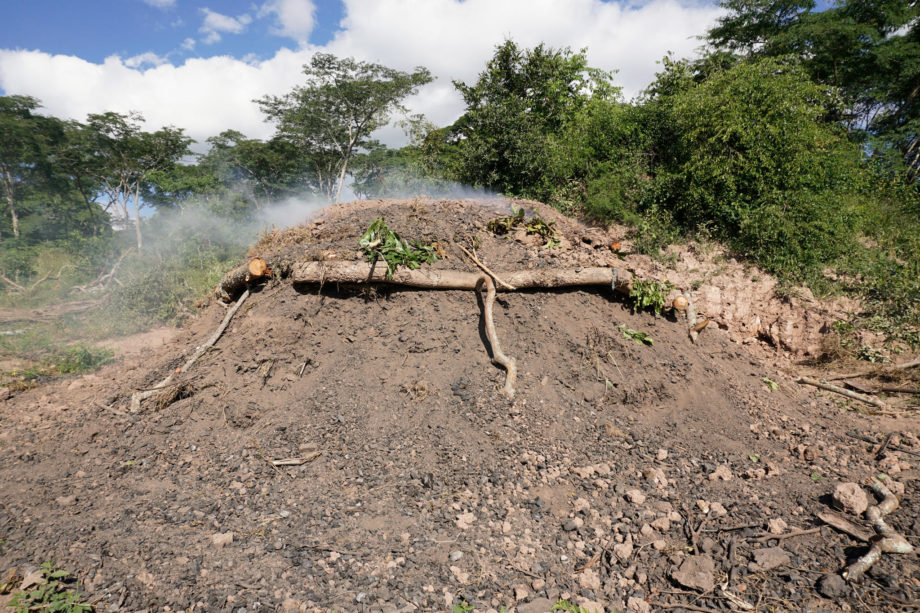 While charcoal production is illegal in Zimbabwe and wasn’t as prevalent in the country before 2010, unreliable electricity and high gas prices have created a market for it, according to a 2021 report by the U.S. Agency for International Development.

“They use selected indigenous trees like the mahogany tree,” Matasva says. Chirinda forest in Mount Selinda is home to the largest single red mahogany tree in the region. Deforestation threatens the tree’s existence, says Matasva, who was motivated to start his organization after realizing that climate change-induced disasters are more prevalent in this eastern part of the country. 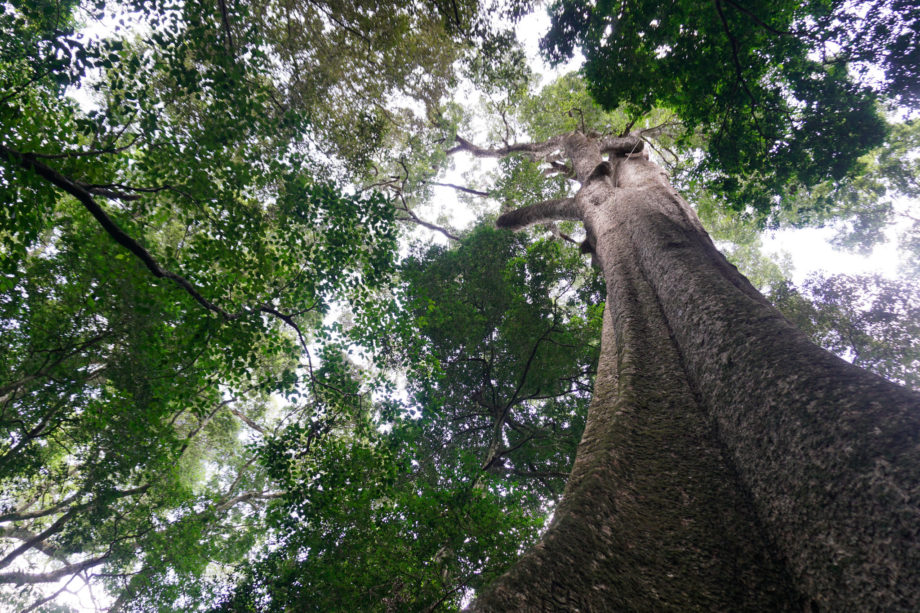 This red mahogany tree in Chirinda forest in Mount Selinda, Zimbabwe, is the largest of its species in the region. Red mahogany is one of the preferred trees for charcoal burning.

The Forestry Commission, the government agency responsible for forest regulation, is aware that charcoal burning is becoming common in the region, spokesperson Violet Makoto says. The commission is conducting various campaigns to discourage people. “As we talk about issues of climate change, further deforestation will have impact,” she says.

The commission also plans to implement a forestry policy. It seeks to give communities access to forestry products while also setting parameters on how resources are used in an effort to protect them and control deforestation.

But it may take more than policies, special operations or improved health care systems to tackle the issue of the porous border.

Border communities in Chipinge are tied together by the shared chiNdau language, kinship and intermarriages. This renders them socially inseparable and their mobility inevitable, according to an article on borderland migration published in GeoJournal, an academic journal focused on geography. It’s common for people to cross over not only to seek services, but to attend family functions.

“It feels like we are part of the same community because we are so close together,” says Mhlanga, the Mozambican who illegally entered Zimbabwe to give birth at the local hospital. “Although we do know that we are two separate countries, and we are aware of the border demarcation.”