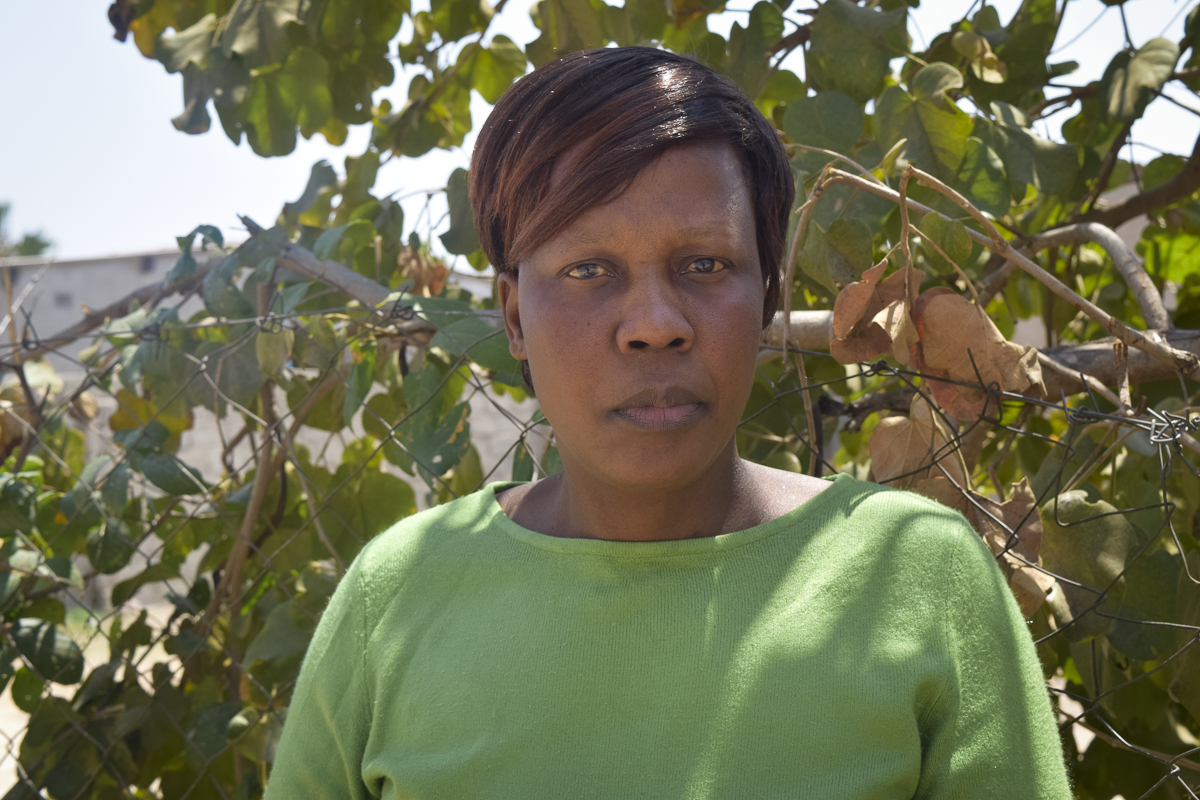 BULAWAYO, ZIMBABWE — Dumisani Dlamini, 56, doesn’t remember the exact year when he tested positive for HIV. It was in the 1990s, he says, and by 2012 he had left his job as a builder because his body couldn’t take the work anymore.

Today, he is hardly able to make ends meet. He is visibly weak, and he cannot speak coherently.

Dlamini, a husband and father of two, says he cannot take his medicine because he does not have the food he needs to take with it.

“The medication I am on makes me dizzy if I take it without food,” he says.

Dlamini says he sometimes receives mealie-meal, a coarse corn flour, from the clinic where he receives his medicine.

“But I have a family, so often it is not enough,” he says. 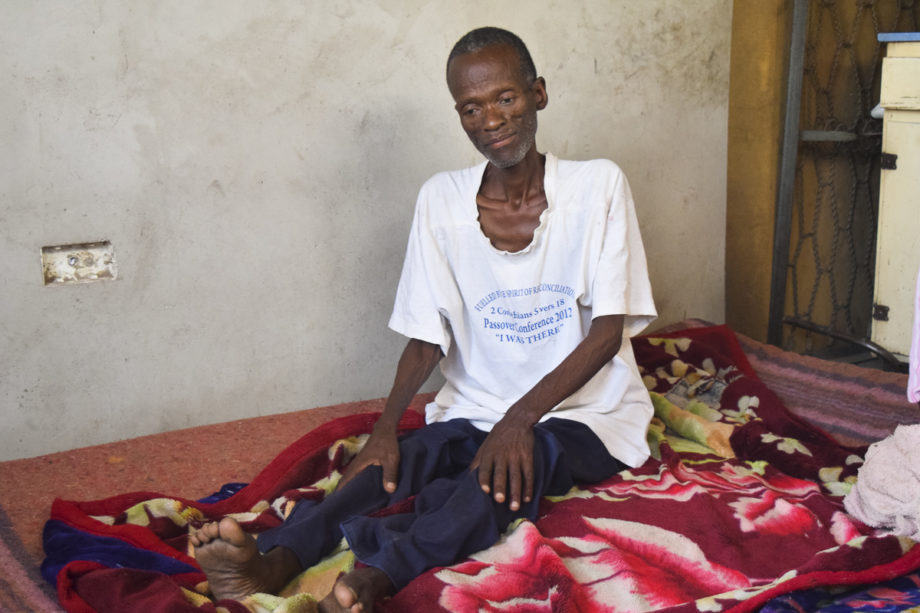 Dumisani Dlamini stopped taking his medicine because he gives the food he receives from a health clinic, intended for him to take with his antiretroviral treatment, to his hungry family members.

Deep poverty in Zimbabwe, where a severe economic crisis is affecting the lives of nearly everyone, is keeping some HIV patients from taking the medicine they receive for free. If the medication is taken without food, the patients can suffer from dizziness, stomach pain and other problems. But many of the patients come from families that struggle to meet their own daily nutritional needs, so those who receive porridge or other food along with their antiretroviral therapy (ART) often give that food to children and others at home.

Food insecurity is a key hurdle to ART adherence. According to a 2014 report from UNAIDS, the United Nations’ office devoted to AIDS-related work, food and nutritional assistance can help people stick to their HIV treatment plans.

INSIDE THE STORY: Stories about HIV are sometimes considered “tired” in Africa, but one Global Press reporter discovered that Zimbabwe’s food insecurity is forcing some HIV patients off their lifesavingmedication. Telling the story, the reporter realized, could save lives. Read the blog.

ART patients can receive nutritional support for up to six months if they have a body mass index below 18.5 or experience severe weight loss during that period, according to World Food Programme guidelines for Zimbabwe. Children under 5 and women who are pregnant or breastfeeding are given supplements based on their upper arm measurements, and children under 2 are assessed separately.

People who don’t gain weight are referred back to their doctors.

But home health providers and HIV patients say the World Food Programme’s guidelines don’t allow for many hungry people to get the food they need, especially those who live with other hungry people.

The food poverty line for one person in July 2016 was $31, or an average of $1 per day, according to the Zimbabwe National Statistics Agency. The World Bank defines extreme poverty as living on less than $1.90 per day. Zimbabwe is a low-income, food-deficit country, according to the World Food Programme, and is ranked at 156 out of 187 on the 2014 United Nations Development Programme’s Human Development Index. Seventy-two percent of the population lives below the national poverty line.

In February, Zimbabwe declared a state of disaster following the El Niño-induced drought of the 2015-2016 farming season. In December 2015, the Zimbabwe Economic Policy Analysis and Research Unit showed that economic conditions ahead in 2016 would continue to deteriorate amid a continued liquidity crunch, declining commodity prices, low investor confidence and declining growth in production.

The medication I am on makes me dizzy if I take it without food.Dumisani Dlamini, a 56-year-old HIV patient

Food aid is distributed at clinics to people who are malnourished, irrespective of HIV status. HIV-positive people who default on their antiretrovirals sometimes become resistant to medication that would have otherwise suppressed the virus.

Health workers say the government, working with agencies including the World Food Programme, should increase food aid and also relax requirements that limit who can receive it.

Fifteen percent of Zimbabweans were HIV-positive as of Dec. 2014, and nearly 77 percent of all adults with HIV were on treatment, according to the National AIDS Council.

Zimbabwe’s Ministry of Health and Child Care, in partnership with the World Food Programme and UNICEF, gives Plumpy’Nut, a peanut-based paste, and soya beans to malnourished HIV-positive people and their families under the Community Management of Acute Malnutrition program, or CMAM, says Dr. Tsitsi Apollo, the ministry’s deputy director for HIV/AIDS and STIs.

“Patients are monitored over time until they have improved and ready to be weaned off from the support,” Apollo says. “However, due to limited funding, the support is inadequate to cover all those in need of food supplementation.”

The government, through the Ministry of Health and Child Care, offers limited assistance to dependents of HIV patients, including free health care, food supplements when available and school fees, under the Basic Education Assistance Module, known as BEAM.

Under another government program, there is a provision to support home-based care initiatives to assist HIV patients who are bedridden or not gainfully employed, Apollo says. Zimbabwe partners with a host of organizations, including UNICEF, the World Food Programme, the U.S. government’s PEPFAR and others.

Dexter Chagwena, a nutritionist at the Ministry of Health and Child Care, says patients no longer default because of hunger as much as they used to. He says the situation has improved because of food support available from different government partners. He says patients who suffer from severe acute malnutrition and moderate acute malnutrition often get supplementary treatment in the form of Plumpy’Nut or a corn soya blend, Super Cereal Plus.

Shepard Munyoro, a nurse clinician at the Mpilo Central Hospital’s Opportunistic Infections Clinic, a government hospital, says he’s not aware of any HIV patients in Bulawayo who have defaulted on their ARTs due to hunger, but adds that the possibility cannot be ruled out. Most patients are using Tenolam and Efavirenz, he says, and both medications should be taken on an empty stomach.

Patients are monitored over time until they have improved and ready to be weaned off from the support. However, due to limited funding, the support is inadequate to cover all those in need of food supplementation.Dr. Tsitsi Apollo, deputy director for HIV/AIDS and STIs at Zimbabwe’s Ministry of Health and Child Care

The side effects some patients feel after taking medication without food could be normal during the first and second week of taking the drugs, Munyoro added, but patients are encouraged to return to the clinic if the side effects linger for more than a month.

But even if an HIV patient can take medication without food, adequate nutrition is key, he says.

“If an HIV patient is not getting good nutrition, it can be a serious challenge as they are prone to opportunistic infections,” he says.

Michael Bartos, Zimbabwe’s country director for UNAIDS, told GPJ via email that there is no data on the number of people who default on their ARTs due to hunger, but noted that it is a risk that needs to be assessed. He wrote that UNAIDS is working with government and non-government partners “to track any linkage between food insecurity” and people defaulting on their ARTs.

Sikhumbuzo Hadebe Sihoma, a community health worker, says she and others often find HIV patients who don’t have enough to eat.

“People are starving, take it from us,” she says. “Yes, some will tell you the clinic is far for them to get medication, but many tell us they have nothing to eat. Not only do they tell us, we also see it when we go into their homes.”

Some patients get assistance from their neighbors, and in extreme cases, the health workers try to facilitate aid from clinics, Sihoma says.

“This is not always easy, as there are rules as to who gets the porridge at the clinic,” she says.

“Some of the patients we see on a day-to-day basis only have one meal per day,” Sihoma says. 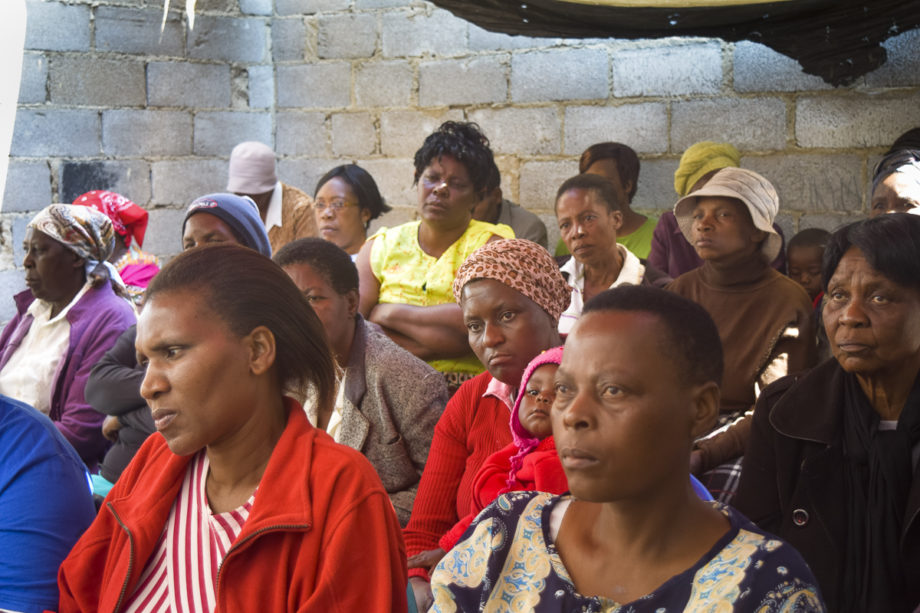 Members of the Home for Compassion support group gather for a regular meeting. The members of the group contribute money to help the HIV patients among them get the food they need to take with their medication.

In Bulawayo, the second-largest city in Zimbabwe, a support group called Home of Compassion helps struggling HIV patients, including Dlamini, the 56-year-old man who stopped taking his medication.

“When asked why, he cited hunger as the cause,” she says.

Charity Moyo, 33, was among the group gathered at Home of Compassion. The mother of three was diagnosed with HIV in 2008 and began her treatment that same year.

“As I speak, I have not had anything to eat today,” she says at midday. “I am supposed to take co-trimoxazole in the morning. I have since stopped taking it because I often do not eat in the morning and it’s painful to take it on an empty stomach.”

Her husband lost his job at a security company four years ago, she says, and debt collectors are after her for unpaid school fees. But her immediate concern, she says, is food. 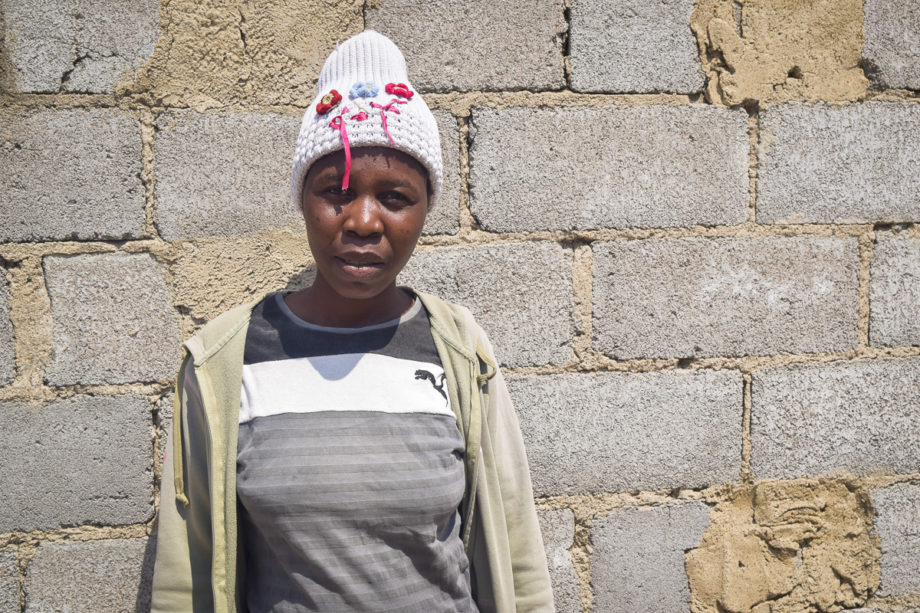 Charity Moyo, 33, doesn’t take her medicine in the morning because she doesn’t have enough food for breakfast.

Regina Tshabangu, who has been on ARTs for seven years, says she tries to take her medication consistently, but she often doesn’t have access to basic food.

She once worked as a foreign currency dealer in Botswana, but left when the job didn’t bring in enough money. She cares for an HIV-positive daughter and three grandchildren.

“Now I am jobless and with a burden of ill health and a family to feed,” she says.

Samantha Ndlovu, a co-founder of Home of Compassion, is HIV positive. She says she comes from a financially comfortable family.

“My sisters are well-paid professionals and I am into politics and run a personal business,” she says. “Not anyone is as fortunate as I am. Although I have never gone without food, I have attempted taking medication without food and I know how painful it is.”

Home of Compassion works to assist its hungriest members. Those who can afford it pay a $5 joining fee and a $1 monthly subscription, Gama says.

“This money goes towards purchasing food for the needy among us so that they can adhere to medication,” she says. “This, however, is still not enough.”

Tshabangu brought vegetables to sell while attending the support group session, but no one is buying because they don’t have money, she says. The government should offer grants for people who want to start small businesses to care for themselves and their families.