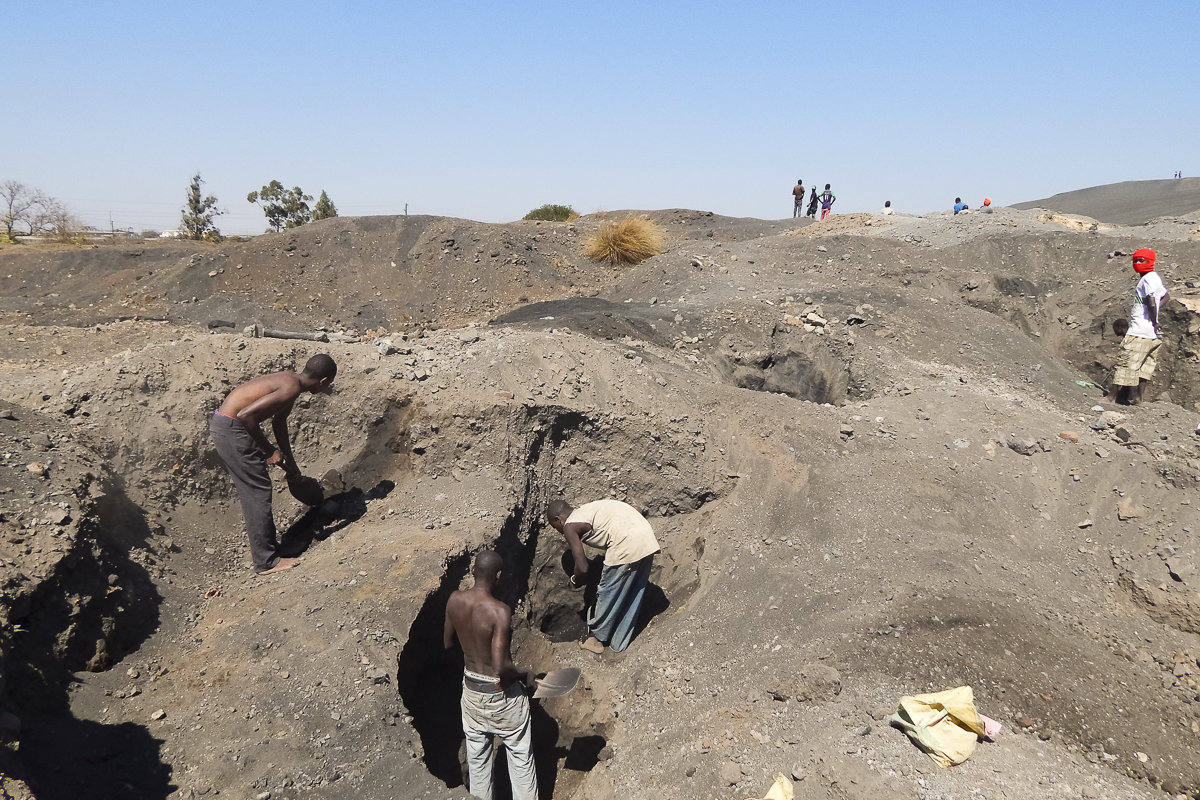 KABWE, ZAMBIA — The sun is scorching as Elijah Mabumba scavenges lead from the mountainous dump site of an old mine. He doesn’t wear any protective clothing. Neither do the children who play at the site.

Now, with lead sulfide and zinc ore reserves seemingly exhausted, Kabwe, the capital of Zambia’s Central Province, is a ghost town, local people say. Nearly a century of mining for lead, cadmium and other deposits plundered Kabwe’s resources, and then the companies involved abandoned the town, leaving poor residents to grapple with an environmental disaster that experts say is among the most severe in the world.

And in the middle of it all, young men like Mabumba are desperate enough to dig directly into the contaminated detritus for leftover lead to sell.

“I know the dangers of lead, but I would rather die of lead poisoning than starve to death,” Mabumba says.

I got sick, I was vomiting, and I was told my blood had high levels of lead contamination. I was treated, but I could not sit home and watch my children starve. I had to work. I had no choice but to come back. Elijah Mabumba, who has worked at the Kabwe lead mining dump site for four years

It’s not just Mabumba and the hundreds of other scavengers who are at risk. Nearly 75 percent of all children surveyed in Kabwe require chelation, a medical treatment designed to remove metals or minerals from one’s body, and nearly all children were at high risk of lead poisoning, according to a 2015 report published in the International Journal of Sciences. No level of lead is considered safe, according to the World Health Organization, but people in Kabwe live every day with lead poisoning that can cause nerve damage, loss of brain function and a host of other serious health problems.

This Kabwe lead dump site was an active work zone for Zambia Consolidated Copper Mines between 1970 and 1994, when it closed its operations there. Even before then, Kabwe was a mining town, feeding demand from London as early as the start of the 20th century.

In 2011, London-based Berkeley Mineral Resources (BMR) bought much of the land at the mine site for $3 million, says Paul Chanda, permanent secretary at Zambia’s Ministry of Mines and Minerals Development. (BMR, in a press release, noted that the final price was $2.5 million, with an option for more cash and shares.)

And in 2012, the Zambian government made an agreement with Enviro Processing Limited, BMR’s Zambian subsidiary, for a project to process the tailings ─ the leftover lead and zinc deposits laced through the dump site’s debris.

The project is hoped to bring about 50 direct jobs to Kabwe and the surrounding area.

The $2.5 million, 10-year project is expected to remove base metals from the site, and in the process monitor groundwater, suppress dust and restore the mine’s land for alternate uses, as well as other goals, according to a December 2015 report prepared for the Zambian government. 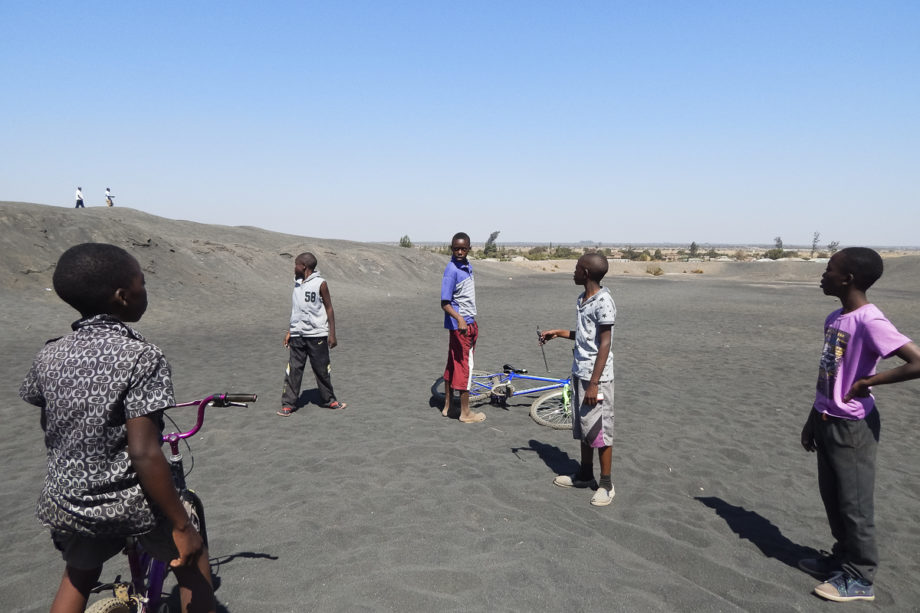 Children play at an abandoned lead mine. The mine site has been purchased by a company that plans to secure its perimeter, but children, most of whom have elevated lead levels in their blood, say they like to enjoy the view from the top of the lead dump.

In a video interview filmed at a trade show and published online in late 2015, BMR chief executive Alex Borrelli said the company keeps people off the tailings ─ the mine dumps ─ and acknowledged that dust kicked up in the area is likely contaminated.

But Geoff Casson, the general manager at Enviro Processing Limited, says the company knows that people scavenge for lead at the site and that it sends patrols out to find them.

“Once the scavengers are found we do involve the police but the problem is the moment these people see the people that are patrolling they run off,” Casson says. “We have warned those people several times about the dangers of being at the dumpsite, we have many times confiscated their tools but they still get back once the patrol officers go to patrol the other sides.”

Chanda says BMR, through Enviro Processing Limited, is obligated to keep people out of the mine site.

Chanda says the Zambian government doesn’t intend to revoke the company’s license for its failure to keep people out of the mine site, because Enviro Processing plans to begin work there before year’s end.

In the meantime, the lead exposure will have a long-term impact on the people who live there, says Ireen Chipili, principal information and communication officer at the Zambia Environmental Management Agency, a regulator.

“We acknowledge the need for massive sensitization,” she says. “We need to do more to raise awareness for people to understand the impact of lead on their health.”

Joblessness pushes poor Zambians to take up small-scale mining at the site. The official unemployment rate in the Central Province, where Kabwe is located, is 10 percent ─ the second-highest in the country, after the Copperbelt region, which has a 12.7 percent unemployment rate, according to the 2014 Zambia Labour Force Survey.

Mabumba, a father of three, says he stacks the lead excavated from the dump site in 25-kilogram sacks, sold at 50 kwacha ($5) per sack.

If he works hard, he says, he can excavate 10 sacks of lead in a day.

He’s been treated once for lead poisoning in the four years he’s worked at the site.

“I got sick, I was vomiting, and I was told my blood had high levels of lead contamination,” he says. “I was treated, but I could not sit home and watch my children starve. I had to work. I had no choice but to come back.”

He says he is now immune to lead poisoning.

“I believe it is those that are scared to get exposed to lead that get sick,” he says, adding that he doesn’t even have his blood checked for lead contamination.

Mabumba says he knows people who have died after working at the site, but he questions whether lead poisoning was the cause.

“I think it was just their time to die,” he says.

It’s not clear how many people in Kabwe understand the dangers of lead poisoning, says Dr. Rosemary Mwanza, a medical officer for Zambia’s Central Province.

People check their lead levels and seek treatment when those levels are high, she says, but no one has conducted research on whether people are aware of the dangers of working at the old mine site.

Francis Kabuso, who also scavenges at the dump site, says what the scavengers need is empowerment, not education about lead contamination.

“No amount of sensitization will push us out of here,” he says. “We already know about lead poisoning, but if we get out of here, what are we going to eat? What we need is empowerment ─ once we are empowered, we will gladly leave.”

While the scavengers are knowledgeable about lead poisoning, some children  who play at the dump site are unaware of the danger.

Twelve-year-old Kelvin Sampa says the dump site is tranquil. He and his friends go there, he says.

“I don’t know that it is dangerous to play here,” he says. “We often play here with my friends because it is quiet, and when we climb on top of the mountain, we can see most of the places around the city.”