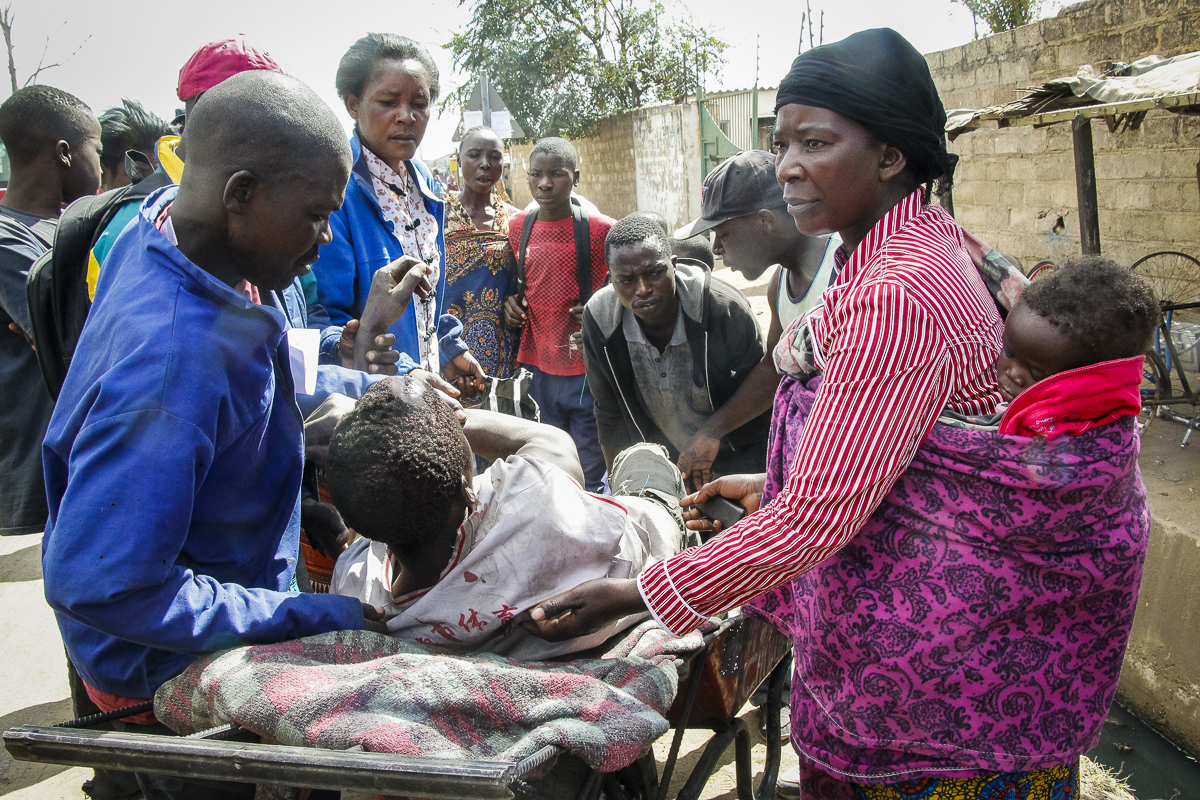 LUSAKA, ZAMBIA — Maxison Chuuka lies helpless on the roadside. Blood drips from a deep cut on his forehead.

Chuuka was on his way to the Mulungushi International Conference Centre in Lusaka to support United Party for National Development (UPND) candidate Hakainde Hichilema in June when he was attacked. Chuuka’s UPND T-shirt gave him away to supporters of Patriotic Front, the ruling party. He was kicked and hit on the forehead with a stone by members of the group before they ran away. 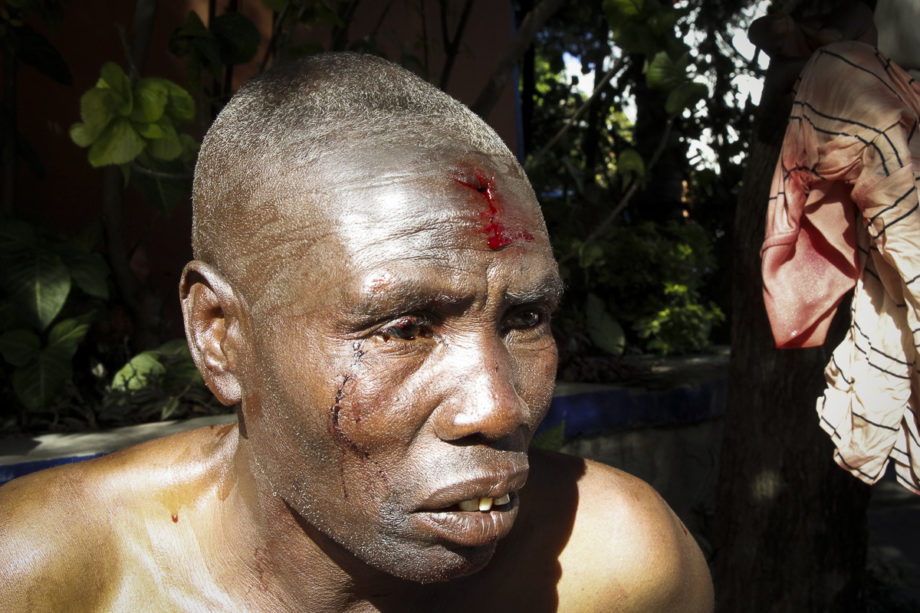 Maxison Chuuka, a UPND supporter, says he was attacked by rival political party supporters in June in Lusaka.

Across the road, Princess Kasune’s car was reduced to a shell after the same gang shattered its windows at about the same time that Chuuka was accosted. Kasune, who is seeking a parliamentary seat in Keembe Constituency in Central province, was heading to the same event when, she says, Patriotic Front supporters spotted her. The car was branded in UPND colors. The group threw stones at the car, but she managed to drive off and find refuge in a nearby yard.

“This cannot be tolerated,” she says. “This has to come to an end before the country is on fire.”

Violence has marred campaigns ahead of general elections with attacks being reported by and against both the ruling and opposition parties. Tensions rose so much that the Electoral Commission of Zambia (ECZ) on July 9 temporarily suspended campaigns. That suspension has since been lifted.

Citizens in this southern African nation go to the polls on Aug. 11 to elect a president, parliament members and local authority representatives. A referendum on a constitutional amendment also takes place on the same day.

President Edgar Lungu, of Patriotic Front, and Hichilema, of UPND, are the front-runners in the presidential race. Their supporters have clashed many times in recent months.

“This year, we have received overwhelming reports of assault cases. Most of these are among party cadres but since there is no offense known as political violence these cases are recorded as assault,” says Zambia Police deputy spokesperson Rae Hamoonga.

Billboards belonging to both parties have also been defaced. A number of people have been arrested in connection with the violence, Hamoonga says.

The Council of Churches in Zambia, Evangelical Fellowship of Zambia and the Zambia Episcopal Conference in March held a meeting with the political parties who committed to stopping the violence but clashes between supporters of rival parties have continued. 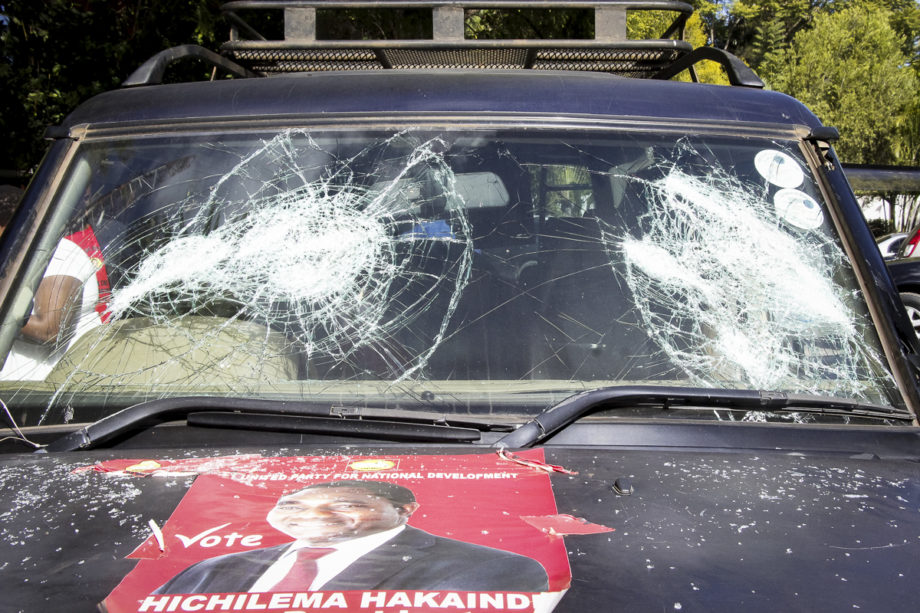 The windshield of a vehicle bearing a sign supporting the United Party for National Development (UPND), the opposition party, was smashed in June in Lusaka, Zambia’s capital city.

Alex Ng’oma, a political science lecturer at the University of Zambia, says the violence has escalated because of the tension of what is expected to be a close presidential race and the fact, he believes, that candidates are afraid to tame their supporters. During last year’s presidential election, held after the death of President Michael Sata, Lungu garnered 48.3 percent of the vote while Hichilema followed closely with 46.7 percent.

“Every vote counts. No one can afford to lose even a single vote,” Ng’oma says. “This has forced the political leaders to fail to take action against their supporters that are violent because to them, these supporters are their votes.”

Kasune, the parliamentary contestant, says the political violence has the potential to lead to civil war.

“We can’t continue like this,” she says. “Those who are hurt will retaliate and, in the end, it will be war.”

Peter Lindaka, who says his car windshield was smashed by political supporters, says the chaos could hurt the country’s reputation.

“We are a country that is known for peace but this will dent our image,” he says. “Tourists might not even visit this country because of violence. That will cause us to lose revenue as a country.”

He says a group of Patriotic Front supporters smashed the windows of his car after noticing that he was wearing an UPND T-shirt. He says he spent 20,000 Zambian kwacha ($2,114) to fix the car.

Officials of the two warring political parties say they have warned their supporters against violence and will not defend those arrested for causing chaos.

“We have strongly warned our supporters to desist from violence but sometimes they are forced to retaliate when they are injured,” says Stephen Katuka, the secretary general of UPND. “But we will not condone violence. We can’t win elections through violence.”

Davies Chama, the secretary general of Patriotic Front, says the party will not protect anyone found engaging in violence.

“We have plainly told our supporters that those engaging in violence will be on their own, no one from the party will support such acts. We have even told the police to take action regardless of which political party the offender is from,” Chama says.

Hamoonga, the police spokesperson, says it is the responsibility of parties to control their supporters and stop the violence.

“We are warning the political parties to tame their cadres. If not, we will deal with the offenders,” Hamoonga says.