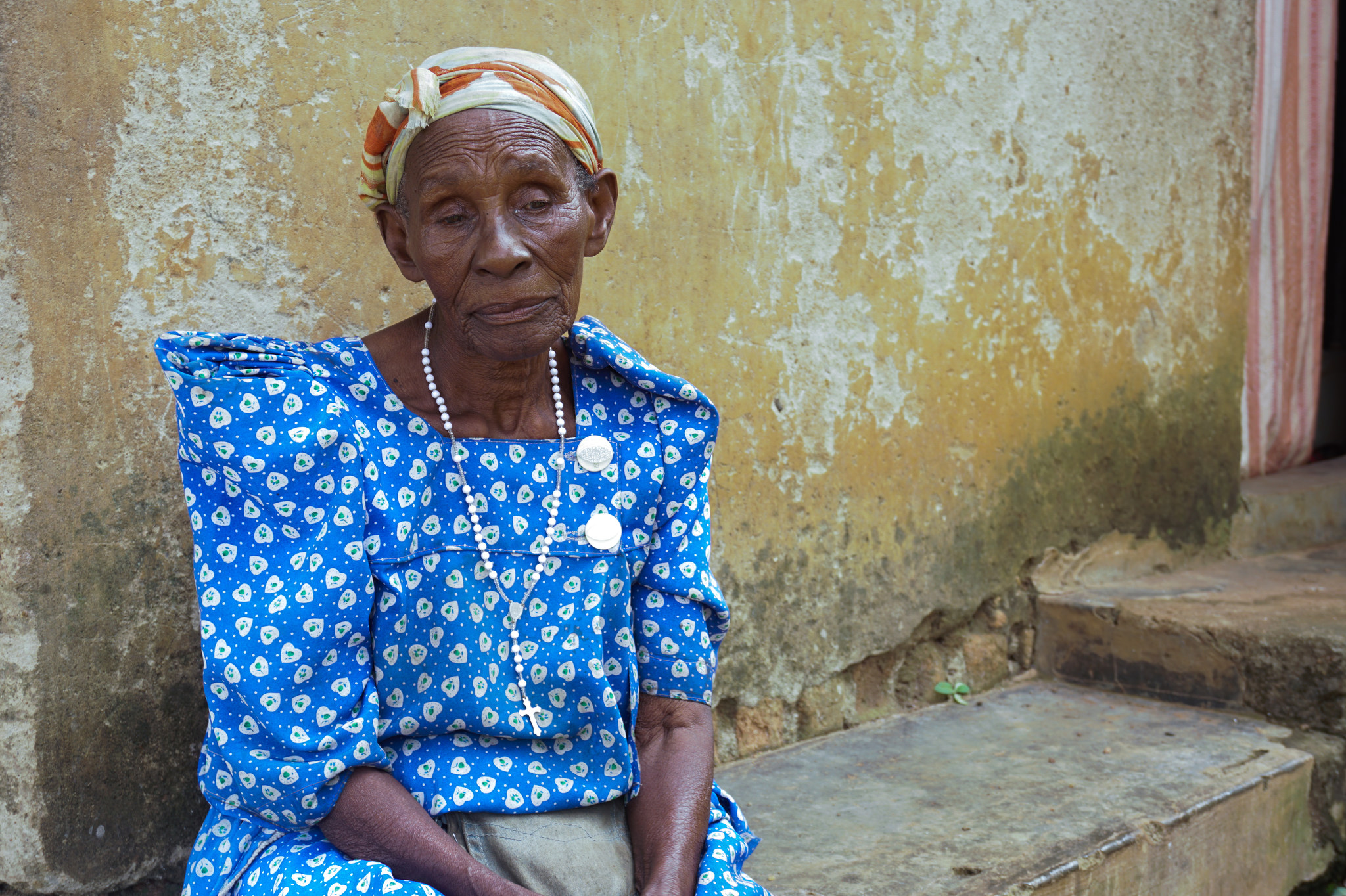 WAKISO, UGANDA — Maria Magdalena Uzagilawesu is 87 and blind in her right eye. A wisp of a woman in a blue, dotted dress, she once sold woven mats, but her eyes often water, and she can’t see the dried palm leaves well enough now to entwine them. Her sole financial lifeline is her 17-year-old granddaughter, who sells tomatoes and crushes stones for construction projects.

Like nearly all Ugandans age 80 and older, Uzagilawesu should qualify for a senior citizen grant, a small monthly payment that could help her buy glasses. But to do so, she needs a national identity card, the primary way Ugandans prove their citizenship.

In 2015, Uzagilawesu tried to register for a national ID at a government office, but the form was in English. Like many rural Ugandans, she only speaks her local language, Luganda. An official offered to help, she says, for 5,000 Ugandan shillings (about $1.40) she didn’t have.

Later, she says, officials stopped by her home outside Kampala, the capital, and collected her information, ostensibly to get her a card. She still doesn’t have one. “I am hungry right now; I would use the money to buy food,” she says. “But I guess it’s never coming.”

For many poor, elderly Ugandans, the national ID program is a barrier to vital cash assistance and medical care. Mainly because of bureaucratic failures that have prevented people from registering, as many as one-third of adult Ugandans haven’t received an ID, according to the 2021 report “Chased Away and Left to Die” by a group of researchers in Uganda and the United States.

Ugandans once relied on voter IDs, driver’s permits, baptismal cards and other documents to access government services. In the 2010s, the country launched the national ID program, known in Luganda as “ndaga muntu.” Officials touted it as a tool to track criminals and prevent fraud — but they also eventually made it a requirement to get government benefits. 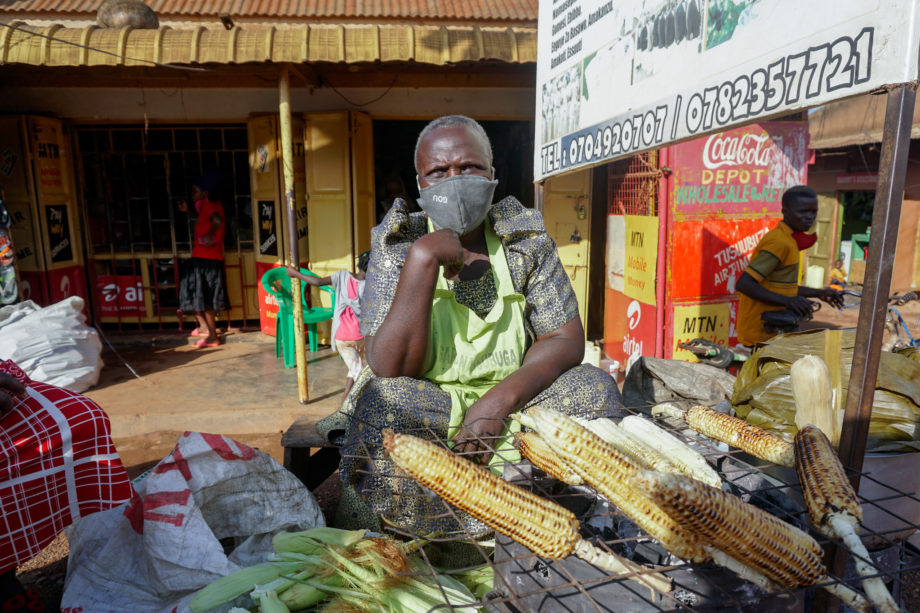 Mariam Nakabugo, 83, roasts maize on a roadside stove. Without a national ID that would give her access to senior benefits, this is how she earns money to care for her six grandchildren.

In a country where ageism is rampant, particularly toward elderly women, the lack of an ID can condemn them to twilight years of poverty and strife. “The inability to obtain a Ndaga Muntu therefore truly equals a form of ‘social death,’” the “Chased Away” report says, “where not having a card prevents one from participating fully in society, and may sometimes even result in actual death.” Based on hundreds of interviews, the report was published by two Ugandan nongovernmental organizations — the Initiative for Social and Economic Rights and Unwanted Witness — along with the Center for Human Rights and Global Justice at the United States-based New York University School of Law.

Uganda has poured at least 745 billion shillings (about $209 million) into the ID system, the report says, with additional funds from international organizations. Rosemary Kisembo, executive director of the National Identification and Registration Authority, which oversees the program, says officials are working to correct errors that have boxed out Ugandans. However, she says, “The registration process does not selectively single out vulnerable seniors for exclusion.”

Sight Akatukunda, a spokesperson for the Expanding Social Protection Programme, which includes the senior grant, says registrations for benefits with documents other than the national ID “proved fraudulent in some places and therefore could not work.” Overall, she says, the ID program is a good system.

The hurdles to getting an ID begin with the registration process. Ahead of the 2016 general election, the government embarked on a sweeping campaign to sign up Ugandans, even visiting schools and markets in far-flung villages. Once the mass registration drives ended — in part, the report says, because of cost — securing an ID became harder. 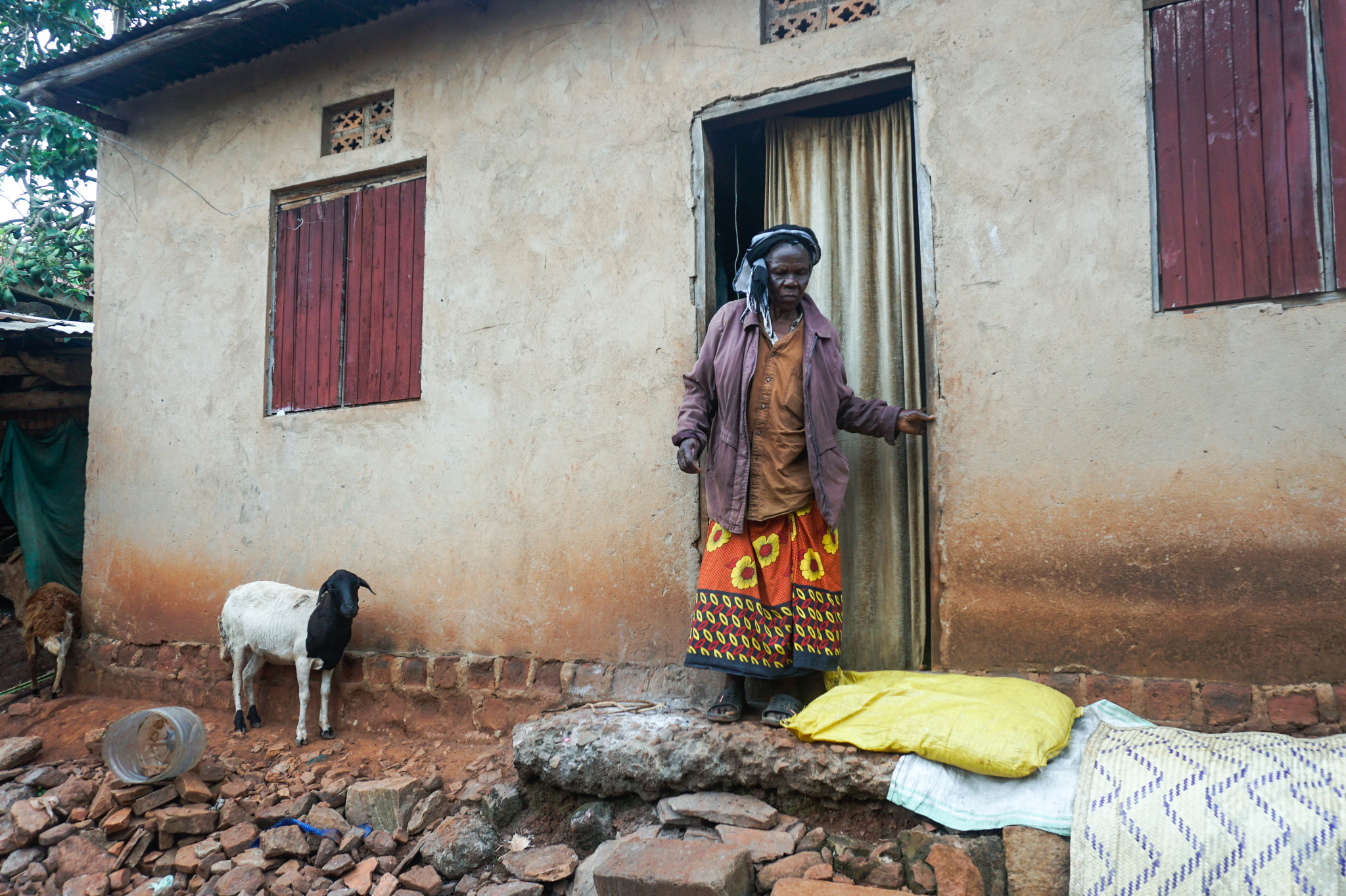 Ugandans must apply at a registration authority office, but not every district has one. Sometimes there aren’t enough staff or computers to process applications. Applicants may need to return several days in a row, a major roadblock if they are elderly or have a disability. The report says one man had to repeatedly carry his ailing father on his back to a registration point.

At the registration counter, more pitfalls await. Ugandans need to present proof of their age, but the report says less than one-third of adults have a birth certificate. They also are photographed and fingerprinted — a potential barrier for older Ugandans whose prints, after decades of harvesting aloe vera or chopping trees, are indiscernible. (Kisembo says people without fingerprints can still get an ID.)

The consequences of having no ID are potentially dire. Close to 200,000 Ugandans are older than 80. Those without a government pension should automatically qualify for a senior grant of 25,000 shillings (about $7) a month, but new beneficiaries can’t get the money without a national ID.

At least one-quarter of these elders, the report says, either don’t have the ID or have one that contains errors, such as an incorrect age. “For those with errors on their IDs, rectifying them comes at a financial cost, which most vulnerable people cannot meet,” says Brian Kiira, of the Kampala-based Initiative for Social and Economic Rights. “They therefore remain excluded.”

"For those with errors on their IDs, rectifying them comes at a financial cost, which most vulnerable people cannot meet."Brian Kiira Initiative for Social and Economic Rights

Officials have started making home visits to older Ugandans to help them acquire IDs, says Dominic Mafwabi Gidudu, who oversees elderly affairs at the Ministry of Gender, Labour and Social Development. In the meantime, senior citizens should be allowed to use other documents to collect the grant, says Rehema Bavuma Namaganda, a researcher on aging at Makerere University in Kampala.

Mariam Nakabugo is 83 and the sole caretaker of her six grandchildren in Kayunga, about 66 kilometers (41 miles) northeast of the capital. Off working in Kampala, her two sons haven’t sent money in years. Every evening, Nakabugo sells roasted maize by the road; she pockets, at most, 9,000 shillings (about $2.50) a day.

She says she signed up for an ID during the mass-registration campaign but never received one. In 2019, she again tried registering at a government office; again, no card was issued. She has no idea why. With a senior grant, she wouldn’t have to work as often. She could routinely buy the medicine she needs to prevent her blood pressure from spiking. Instead, she skips her medication sometimes, and feels herself grow weaker.