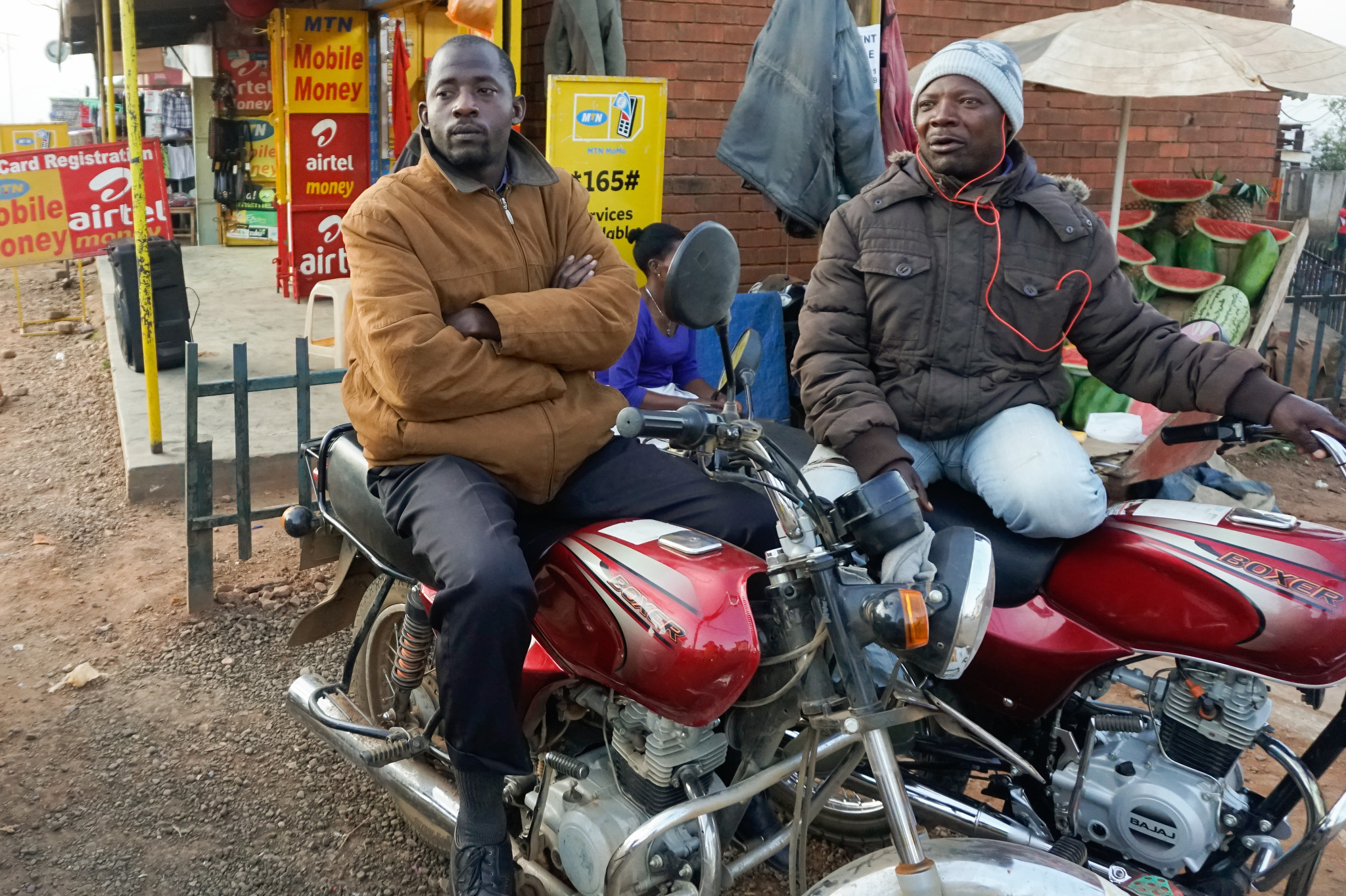 KAMPALA, UGANDA — After years of using a bicycle to haul produce for traders around markets in Kampala’s Nansana suburb, Isaac Sekaate was desperate to find a way to make a living that wasn’t so hard on his body. He had seen some of his friends buy motorcycles and use them as taxis, known in East Africa as boda bodas, but he thought that was out of the question because he could never afford one. But one day, a friend told him that with a down payment, Sekaate could get a motorcycle loan.

“I sold my bicycle,” he says, shuffling his feet.

But that only raised about 200,000 Ugandan shillings ($52), much less than the 900,000 shillings ($233) he needed for the down payment. Sekaate began to pressure his family to get loans for him. His mother borrowed 500,000 shillings (about $129) from a village money lending group. His brother took a loan of 200,000 shillings. In February, Sekaate went to a lending company called Watu and got a motorcycle on loan. When he saw the motorbike at the showroom, he was overwhelmed and began to dream about a future without financial hardships.

“I knew I had graduated from poverty,” he says. “I signed the agreement, without reading it. All I knew was I was going to be better now that I had a new bike.”

Today, Sekaate wishes he hadn’t. After his child got sick, he failed to make payments and Watu repossessed his motorcycle. His family now depends on his wife’s income. 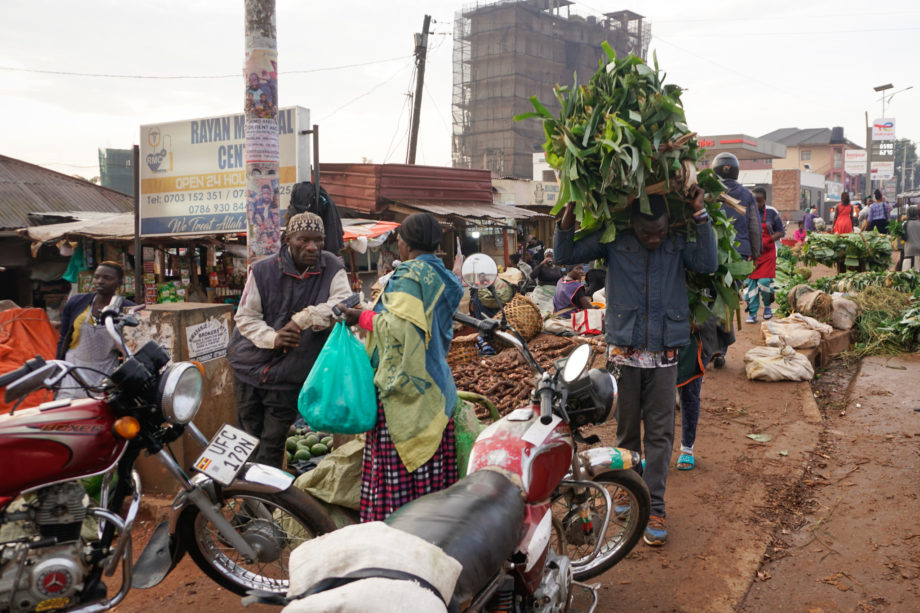 Isaac Sekaate, right, hauls piles of banana leaves for a trader at Nansana Total Market in Kampala, Uganda. Sekaate bought a motorcycle on loan; but when his child was hospitalized for two weeks, he failed to make scheduled payments, crashed and saw the bike repossessed.

Companies that offer loans for motorcycles have come under criticism for what boda boda operators and workers’ rights advocates say are predatory lending practices, which take advantage of people who are often not capable of reading and understanding the contracts they sign. Boda boda operators say the contracts do not give borrowers flexibility during times of emergency, and that lenders rush to repossess and resell bikes, even when borrowers are almost done paying off the loans.

The concept of boda bodas originated in the 1960s when bicycles were used to smuggle products between Kenya and the Ugandan border town of Busia, according to research published in the Scientific African journal. In the 1980s and ’90s, cyclists fitted their bicycles with cushions and began ferrying passengers. The word “boda” is an Africanized form of “border” and “boda boda” stems from the calls bicycle taxi operators shouted out to attract customers. Bicycles have since been generally replaced by motorcycles.

As the demand for boda boda transport has increased, many lending companies specializing in motorcycle loans have sprung up. With a down payment as low as 700,000 shillings (about $180), one can get a new motorcycle and make payments as they earn.

For Timothy Kajjumba, a resident of the Kasubi suburb of Kampala, a motorcycle loan has restored hope in his life. It has made it possible for him to provide food and medical care for his family, and to pay for the education of his children. He averages 210,000 shillings (about $55) a week, pays the lender 120,000 (about $31) and pockets 90,000 (about $24).

“My boda boda business is my sole livelihood,” says Kajjumba, who is halfway through his two-year loan. “A loan where you are using the service as you pay for it is a blessing.”

Siraj Mutyaba, spokesperson for the Boda Boda Association, an advocacy group for operators, acknowledges that having motorcycle taxis has created financial opportunities and stability for many like Kajjumba. But he says operating a leased boda boda is stressful and has made many others poorer because of the rigid terms. Mutyaba says lending companies only care about making money.

“They want prompt payment, and when someone misses one weekly payment, they begin harassment,” he says. “Then they repossess the bike and start charging storage fees. The longer they keep it, the more money it adds to what someone is already struggling to repay.”

Mutyaba says the companies repossess bikes indiscriminately, regardless of whether the purchaser is nearing the end of the loan period. Even those who successfully complete repayment of loans end up with motorcycles that are worn out because they had to overuse them to be able to make the hefty weekly payments, he says. He would like the government to intervene to regulate the lenders.

Uganda does not have a consumer protection agency, says Charles Ocici, director of Enterprise Uganda, an organization that offers support services to small- and medium-sized businesses. Boda boda loans are no different from bank loans, so borrowers should not expect leniency, Ocici says, and he advises buyers against signing any agreement if they do not understand its terms.

“If you don’t understand the English language, you should seek translation in Luganda,” Ocici says.

The Ministry of Trade, Industry and Cooperatives doesn’t work with boda bodas because they belong to the service industry, spokesperson Irene Kiiza Onyango says. And the Ministry of Works and Transport is not aware of the terms and conditions of the boda boda loans, says Martha Agama, communications officer.

“We don’t directly work with boda bodas and we have no regulatory authority over the lending companies,” Agama says.

David Musoke Muyomba, organizing secretary of roads for the Amalgamated Transport and General Workers’ Union, says the boda boda business has become too saturated, which has increased the risk of operators failing to make loan payments because they don’t earn enough. It is also cheaper for passengers to take shared taxis or many of the privately-run transit vehicles, he says.

“If they charge more, they don’t get customers,” Muyomba says. “The lending companies have not really helped. They have suffocated them.”

Charles Mwanguhya, public relations officer of Tugende, one of the motorcycle loan companies, denies the company’s lending terms are designed to make it difficult for borrowers to pay off loans. He says Tugende’s business is driven by a desire to help boda boda operators and their families rise above the poverty line.

“We have seen these guys grow,” Mwanguhya says. “They are paying school fees and educating their children. They are buying plots and building homes.”

Christian Kamukama, the head of commercial at Watu, declines to discuss specific cases but says default rates are very low among the company’s clients. Watu has customer care for emergencies, but that requires the borrower to be straightforward. He says some borrowers might be too afraid to come to Watu and explain their challenges because of the general stigma of the motorcycle lending industry, which he blames on a lack of transparency by some companies. When a borrower defaults, Watu doesn’t get police involved until the situation is “really bad.”

“We usually negotiate with our clients because we want them to own the bikes,” Kamukama says. “They should come forth and explain. Even in cases of accidents, we do stand in for them and add the cost to the recurrent bill, so they pay it slowly. But this is if we are informed in advance.”

Kamukama says that although Watu’s agreement is written in English, the company has translators who explain the terms and answer any questions clients might have. And if a borrower who has been diligently making payments is nearing the end of the term but runs into financial difficulties and cannot pay, Watu sells the bike and gives some compensation for the loss of the bike.

Sekaate’s dream to leave poverty behind lasted only about five months. The weekly payment of 80,000 shillings ($20) for the motorcycle loan was manageable. But then his child fell sick with pneumonia and was admitted at a Kampala hospital. By the time the child was discharged two weeks later, he owed the hospital 240,000 shillings ($62). He tried to explain to Watu, his lender, that he was having difficulties, but they didn’t listen, he says. They gave him two weeks to pay what he owed plus an extra 100,000 shillings ($26) to prove that he could manage the purchase.

“With these companies, losing a relative or getting sick or an accident means nothing,” he says. “They want their money.”

Sekaate began working long hours to raise the money for the loan. As he worked, thoughts of what could happen if his boda boda was repossessed began to preoccupy his mind. He worried about his mother and brother, who had taken loans for his down payment. On top of that, he still needed to provide for his family.

“My child was still on medication, so my wife was not working,” Sekaate says.

Then one day, the worst happened. He collided with another boda boda rider, a crash he admits was his fault because he was distracted by constantly thinking about losing his motorcycle. Police impounded his bike and called Watu to inform them one of their motorcycles had been involved in a collision.

When Watu found out that he was behind on his payments for the loan, they repossessed the bike and sold it to someone else, he says.

“My boda boda was my only lifeline,” he says.

Today Sekaate walks with a limp, the result of an injury he sustained from the crash. He is back hauling luggage for traders in Nansana, but this time he straps them on his back. He earns about 1,500 shillings ($0.40) per load, which isn’t enough to provide for his family. He mostly depends on what his wife earns from a small fruit and vegetable stall she owns, a situation that causes him to feel shame.

But the thing he’s most ashamed of is how his decision to get a boda boda loan has affected his relationship with his mother. When he lost his bike, he began ignoring her calls. Eventually, he completely got rid of his phone because he has “no guts” to speak with her.

“I used to see her calling, and I would start sobbing because I know her creditors give her sleepless nights,” he says. “And it is all because of me.”