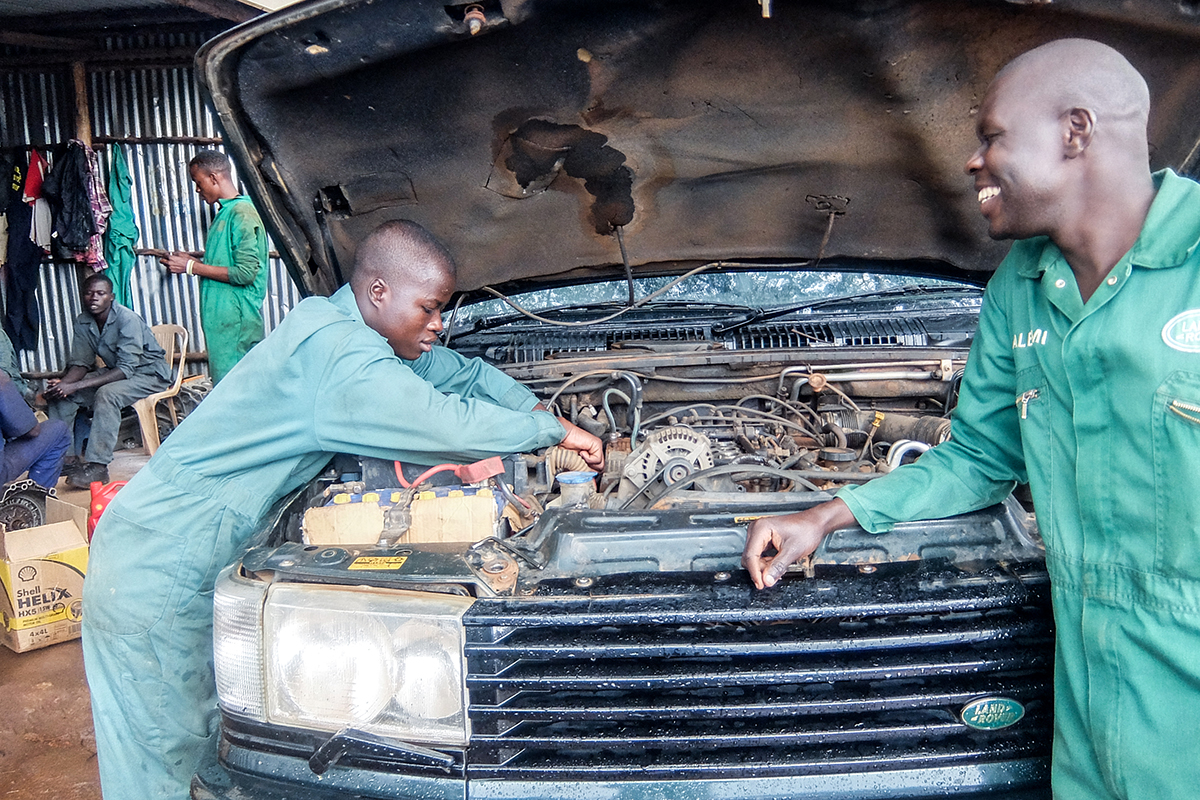 “I thank God for giving me what my heart always longed for,” Lule says, as he wipes the sweat off his face, his hand rubbing the large scars that were once open wounds.

Though he survived the fall from a seven-story commercial building in Uganda’s central business district, the scars on his face and arms are a reminder of his turbulent past. Three years before the incident, Lule ran away from what he says was a neglectful home.

Lule tried to find a job to take care of himself but couldn’t find one. With nowhere to live and no support from his father, Lule says he could not think of another way to cope with his distress, other than ending his life.

Mental health experts in Uganda say, suicide is increasingly common among young people. While they acknowledge that people commit suicide for various complex reasons, they say unemployment is a frequent trigger. They say government officials, mental health professionals and community leaders need to improve existing sensitization efforts and mental health research to reduce the stigma associated with suicide. Suicide survivors and families who lose loved ones to suicide are treated as outcasts in their communities. 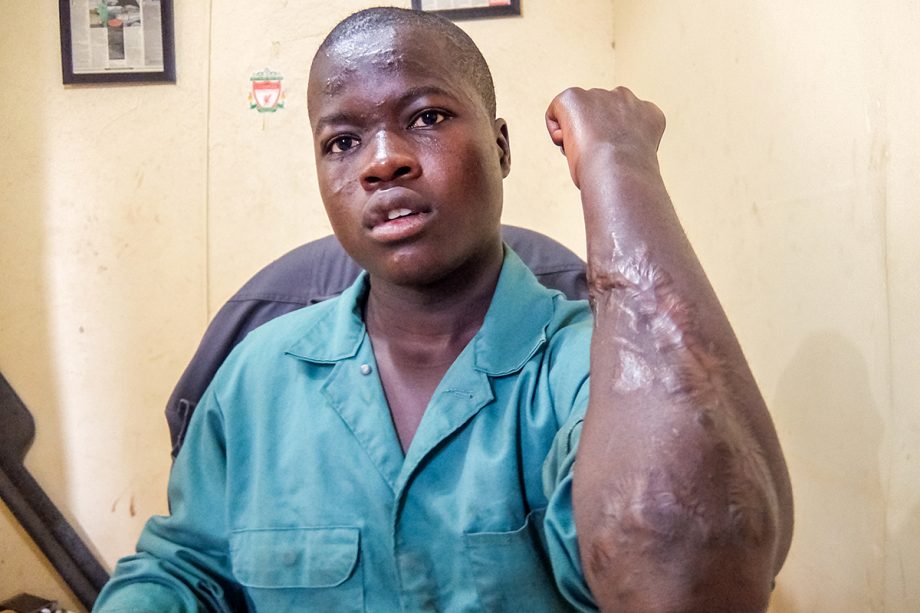 Mustapha Lule shows his scarred arm, a result of his attempted suicide in September 2016.

Globally, psychological experts say that most people who kill themselves have a mental illness. In Uganda, mental health is rarely discussed. It is a sensitive topic because of religious and cultural ideals, says Teopista Katushabe, a clinical psychologist at the Kampala-based Serenity Center, which provides rehabilitation services for people struggling with substance abuse.

These beliefs prevent people with mental illnesses from being properly diagnosed, she adds.

But the Ministry of Health has increased efforts to educate Ugandans about mental health. Its mental health division commemorates World Mental Health Day annually, produces educational television shows, and sends village health teams to communities across the country to connect mentally ill patients with primary care doctors, who may then refer them to clinical psychologists.

In March, the ministry also released a report on mental health policy guidelines for children and adolescents. The report found that 26.6 percent of Ugandan adolescents have anxiety disorders. While the report suggests that suicidal thoughts are high among adolescents, suicide statistics were not available and they remain hard to find in the country. Statistics are often estimated by mental health professionals.

Two years ago, staff from the Serenity Centre and six referral hospitals in the country collected data on suicide in the districts where they are located, Katushabe says. Three of the hospitals are located in the Kampala District, while the others are in the Kabale, Mbale and Mbarara districts. According to the most recent national census in 2014, nearly 3 million people live in these districts. About 12 percent of Ugandans in the four surveyed districts committed suicide, Katushabe says.

Globally, suicide is the second-leading cause of death in people between the ages of 15 and 29. But in Uganda, experts say suicide is most common among people aged 18 to 33.

They commit suicide because they are frustrated with the faltering job market, says Juliet Nakku, deputy director of the Butabika National Referral Hospital in Kampala, one of the six hospitals where data was collected.

Uganda is the world’s second-youngest country, with 60 percent of its population below the age of 20. A shortage of jobs and inadequate skills among the labor force make employment a challenge for this growing population. Since 2012, unemployment among persons aged 15 to 24 has risen by about 1.5 percent, according to the World Bank. The current unemployment rate among this age group rate is nearly 5 percent. 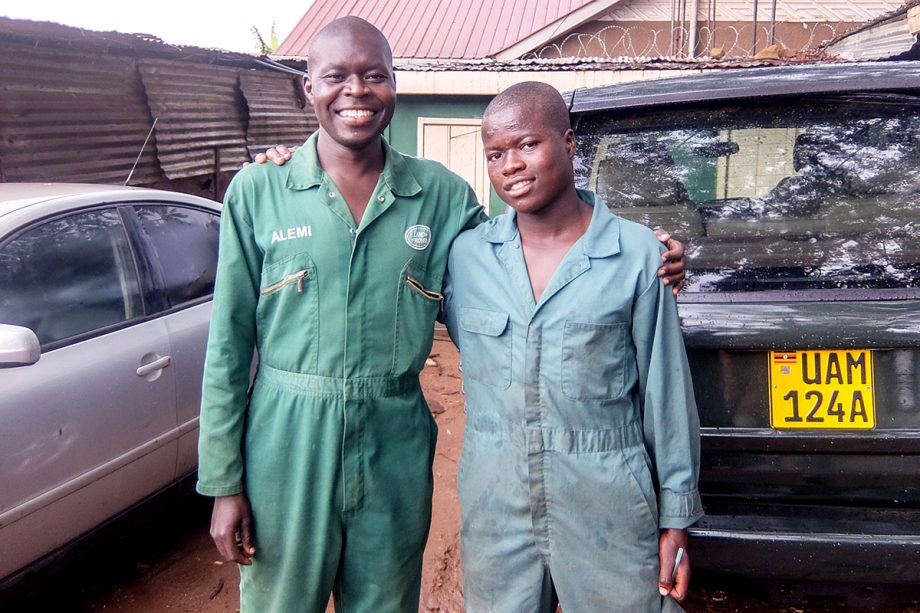 Nakku attributes this to a variety of reasons including limited resources within the Ministry of Health. The budget for the 2016-2017 financial year was about 925 billion Ugandan shillings ($255 million). But the ministry was allocated nearly 870 billion shillings ($239 million) for the 2017-2018 financial year even though the health sector has been identified as a key focus area in helping Uganda become a middle-income country by 2040.

Eradicating diseases like malaria, tuberculosis and HIV among the population is a priority for the government, so there are not enough resources for mental health, Nakku says.

As the government grapples with budget cuts, religious and cultural beliefs shape perceptions of suicide in some communities. Arthur Gakwandi, a literature professor at Bishop Stuart University in Mbarara versed in Ugandan culture, says some Ugandans think people who kill themselves are irrational.

In some communities, the body of a person who ends their life remains untouched because people believe it will pass on ill luck, says Gakwandi. This means that they do not receive funeral rites, an important cultural practice in some Ugandan communities. Suicide is also considered a sin in some religions, he says. About 85 percent of Uganda’s population practices Christianity and 14 percent practices Islam, according to the 2014 national census.

Peace Kyamureku, executive director of the Rural Women and Youth Fund Uganda, says she is still mourning the death of her 34-year-old cousin who killed himself in June.

Kyamureku, who attends a large Catholic church in her village of Kanyaga in Rukungiri District, says her family has not received the emotional support that they thought they would get from their congregation. People shun them and it’s delayed their healing process, she says.

Nobert Musimenta, a Kampala resident, says that he does not sympathize with people who end their lives because of difficult situations. He heard about Lule’s suicide attempt from his friends. He says he knows a lot of people who face financial challenges, but find a way of coping with them.

That lack of empathy preyed on Lule’s emotions on that hot September afternoon as he stood at the top of the building on Kampala Road, he says. Taunted with slurs by passersby, and others preparing to capture his fall on video, Lule says he felt hopeless and abhorred. A woman on the roof of the building, who was hanging washed garments on a clothesline to dry, kept silent as Lule took off his clothes before jumping off the building.

“She saw me strip and look down, heard people urging me to go down and she did not say a word,” he says.

John Mungereza, the parish priest of Our Lady of Africa Church, a Catholic church in Mbuya, says people who take their own lives do not want to hurt themselves. They are dealing with difficult life circumstances and are misunderstood by the people around them, he says. They may not have access to mental health resources, professionals or family to help them cope, he adds.

Lule woke up weeks after the life-threatening fall, in a hospital bed. He was taken to the hospital by police who rushed to the scene after he jumped off the building. Though he had regained consciousness, he says his recollection of what happened was murky and he was scared of the future.  He couldn’t figure out how he survived or where he would go once he was discharged from the hospital. He didn’t know what mental health resources and support systems were available to him.

But Lule says he is lucky to have met Alemi, the vehicle repair shop owner, who paid him several visits while he was recovering in the hospital. The videos that people took of Lule’s attempt to end his life made it to the local television station. It was broadcasted on the evening news the same day, and Alemi says he was disheartened.

“I wanted to help him [Lule] understand that he is still very useful to his community,” says Alemi, who set up his garage to support young men who are unemployed.

It’s important for family, friends and neighbors to support young people who show signs of depression, as this may lead to suicide, Katushabe says. People who are depressed often refuse company, have hallucinations, look unhappy or get aggravated very easily, Katushabe says.

But she says that the Ministry of Health also has a responsibility to train local psychologists to study the brain and behavior, in order to help health professionals and community leaders develop suicide prevention strategies and make mental health research available to the public.