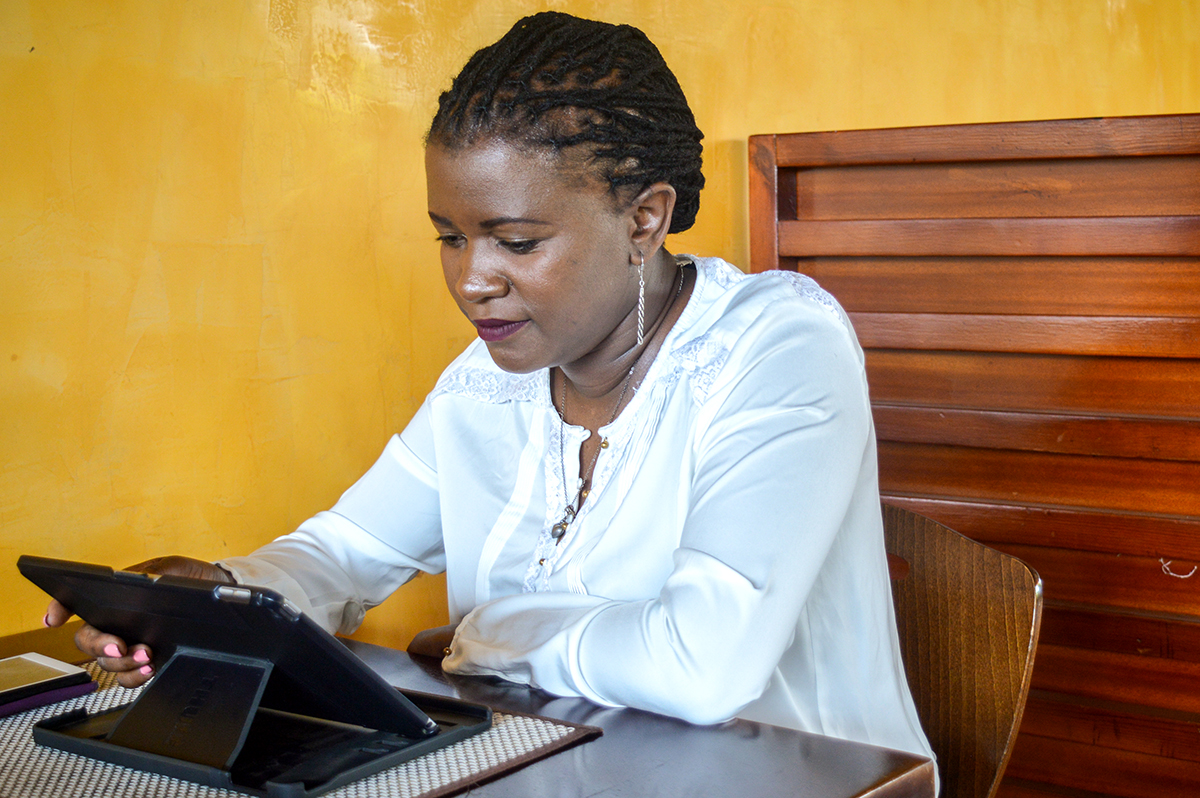 KAMPALA, UGANDA — Rosebell Kagumire says she hadn’t worried too much that she would be politically targeted for her work in advocating for women and girls in Uganda. Not until the recent arrest of fellow activist Stella Nyanzi.

Although Kagumire had heard that some civil society organizations experienced intimidation through office break-ins, “I was not feeling threatened, but now I am aware that there are threats,” says Kagumire, East Africa communications officer for Women’s Link Worldwide.

Before her April 7 arrest, Nyanzi famously used her Facebook page to scold President Yoweri Museveni and First Lady Janet Museveni — often rudely. Recently, she admonished the first lady, who is also the minister of education and sports management, over a failed promise to distribute free sanitary pads to Ugandan schools. Nyanzi’s arrest and detention came as she was leading a social media movement, #Pads4GirlsUg, and vowing to deliver thousands of the pads to the first lady.

According to the charging document, calling the president “a pair of buttocks” online is what got Nyanzi arrested. “Stella Nyanzi on the 28th January 2017 at Kampala District or thereabout used a computer to post on her Facebook page … wherein she made a suggestion or proposal referring to His Excellency Yoweri Kaguta Museveni as among others ‘a pair of buttocks’ which suggestion/proposal is obscene or indecent.”

Nyanzi is charged with two counts under the 2011 Computer Misuse Act: under section 24 (1)(2)(a), for “making any request, suggestion or proposal which is obscene, lewd, lascivious or indecent,” and under section 25, for “attempts to disturb the peace, quiet or right of privacy of any person.” If found guilty of both counts, she faces fines and up to four years in jail.

Ugandans say Nyanzi’s case will be closely watched and may already have caused some to apprehensively self-censor their posts or begin using false names in posting government critiques, but likely won’t muzzle dissent altogether. It also is likely to test the limits of freedom of expression as provided under article 29 of the 1995 Ugandan Constitution.

Intimidating Critics
Before Nyanzi’s high-profile arrest, human rights activists say the government has used intimidation, including breaking into offices of nongovernmental organizations and media companies. “Many journalists have been suspended, stripped of their equipment or badly beaten by ruling party members or security agents,” especially during the run-up to the 2016 presidential election, according to Reporters Without Borders, which ranked Uganda 102 out of 180 nations for press freedom.

Jacqueline Asiimwe Mwesige, a lawyer who has been involved in street activism to advocate human rights for more than 10 years and involved in social media activism for five, says she has never been threatened, but has colleagues who have.

“We watch out for each other; we call and find out if they have reached home” safely, she says. “Some have to avoid taking water at functions” to make sure they aren’t poisoned.

Arresting government critics like Nyanzi may deter some from speaking up and yet motivate others to do so, Asiimwe says.

“I have kept a low profile,” she says. “Many of us have been mindful who is watching, who is listening to our conversations since even phones are tapped, but some may not be intimidated by these arrests of activists.” 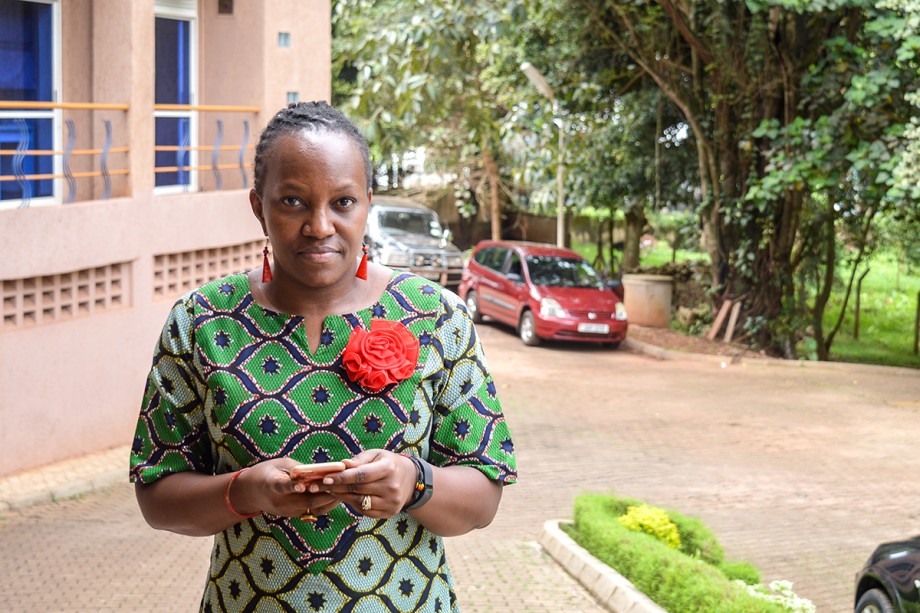 Jacqueline Asiimwe Mwesige, a human rights advocate, with her phone at the Metropole Hotel, in Kampala, Uganda.

Constitutional Freedoms
Charity Kalebbo Ahimbisibwe, communications and advocacy manager for the Citizens’ Coalition for Electoral Democracy (CCEDU), a local NGO that advocates for transparency in electoral processes in Uganda, says charges against Nyanzi based on the Computer Misuse Act go against the Ugandan Constitution.

She says the clampdown on freedoms may cause many to hide their identities online. “They may mostly use pseudonyms and stay online causing mayhem” that way, she says.

Bernard Tabaire, a columnist with the newspaper Sunday Monitor, says Nyanzi’s arrest isn’t the first crackdown on online publications. He noted that Timothy Kalyegira was arrested in 2011 after he published online reports expressing doubt about whether it was Somali-based militants who killed more than 76 people in the 2010 Kampala bombings.

Tabaire says it won’t be easy to curtail freedom of expression on social media as many more new people are going online.

“Once people who are active on social media are held back, others will emerge as more and more are getting access to internet. You will keep seeing new voices come,” he says.

Tabaire says that, depending on what happens to Nyanzi, Ugandans will choose to either self-censor posts or disguise their identity on social media, but he doubts government criticism via social media will end.

“People may have a second guess-effect or hide [their] identity and or publish outside” their own identity, he says.

Limits of Freedom
Not all Ugandans support using social media critique the government — or to be impolite about it.

Timothy Baluku, 23, who lives in the Kampala suburb of Kulambiro, believes citizens should be loyal to leaders and not raise their voices against them.

I have kept a low profile. Many of us have been mindful who is watching, who is listening to our conversations since even phones are tapped, but some may not be intimidated by these arrests of activists.Jacqueline Asiimwe Mwesige, lawyer and human rights activist

“Leadership comes from God so citizens are obligated to cooperate and respect leaders in power. If they misbehave they should be dealt with accordingly” and voted out during elections, he says.

“For those not comfortable with leadership, they should be patient enough to wait for the next elections and change leadership through their vote, not cause chaos after a leader has been chosen,” he says.

Emilian Kayima, public relations officer for the Kampala Metropolitan Police, says that although the Ugandan Constitution provides for freedom of expression, it also includes provisions that say relevant laws will be enacted detailing limits.

“Freedoms have limitations, so rights don’t infringe on other people’s rights,” Kayima says.

When asked about why the government didn’t respond to the issues raised by Nyanzi as opposed to arresting her, he responded, “Do you have children? A child who throws plates away when they need food cannot be treated the same way as one who comes to a parent and asks politely for food.”

Not a Slip of the Tongue
Nyanzi’s often rude remarks against the government are not a slip of the tongue made in anger. It is an intentional tactic. Her Facebook page cites the use of “radical rudeness” against colonialism during the 1940s. “Know our rich history before you think I am the first fighter with words,” she wrote.

Tabaire says that the government needs to respond to criticisms leveled against it, not intimidate citizens.

“Government needs to answer criticism using proper language and not arresting people, thus making the rest of us weigh our accusations versus response,” he says.

Activist Kagumire encourages Ugandans “not to give in to threats. They should continue advocating for a better country.”