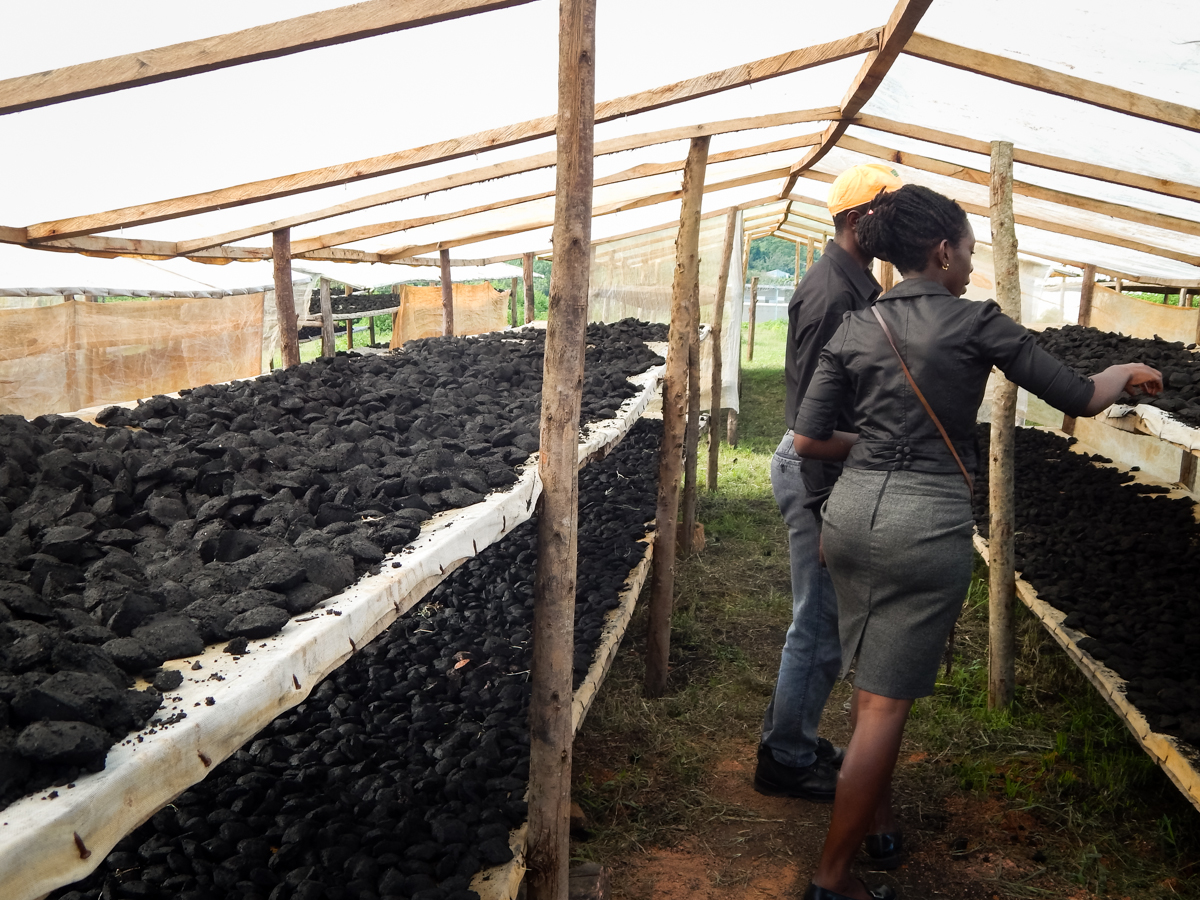 Life is difficult here, especially for women and girls who face consistent threats of sexual assault. And the lack of a basic necessity – cooking fuel – is at the root of that threat.

But a new green energy program could keep girls and women safe and improve overall quality of life. The program created a facility that produces energy-saving stoves and slow-burning briquettes, some of which have already been distributed to people there. The settlement’s population is anywhere from 16,500 to 26,000, depending on who’s counting.

Each day that passes, we ponder on what we are going to use for cooking the next meal. At times we skip a meal for lack of firewood. Beatrice Akimana, a refugee from the Democratic Republic of Congo

The program is part of a major global project established in 2007 by a consortium of international agencies, including UNHCR, World Food Programme, Women’s Refugee Commission and other organizations. That program, known as Safe Access to Fuel and Energy (SAFE), brings energy alternatives to crisis-affected populations around the world.

The stove and briquettes program isn’t the only SAFE project at the Kyaka II settlement. According to the SAFE website, high-efficiency stoves and solar street lights were delivered to the camp as part of a project that ran from 2013 to 2014.

More than a dozen SAFE projects have been implemented or are planned for implementation in Uganda, according to the website.

The stove and briquettes facility at the Kyaka II settlement opened last year. 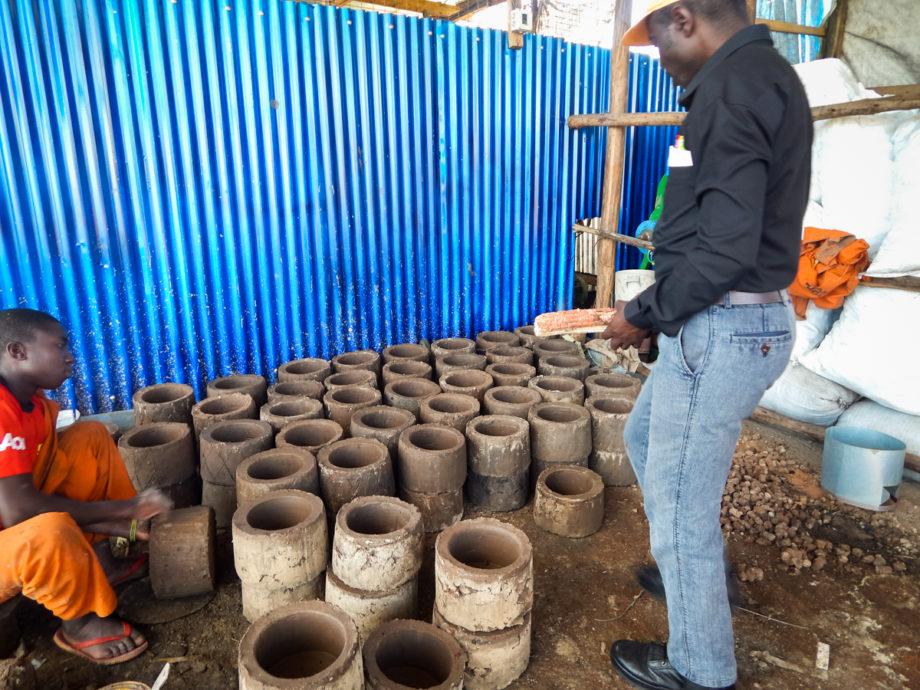 Barnabas Bwambare, standing, a supervisor with Adapt+ Limited, inspects the production of energy-efficient stoves at Kyaka II, a refugee settlement. The stoves are distributed to refugees for free.

The stoves and briquettes could eliminate some of the threat of sexual assault in the settlement, which sometimes occurs when women and girls search for firewood in remote areas.

Girls told researchers from the Women’s Refugee Commission for a 2013 report that they face sexual violence when they collect firewood.

That’s only one way the search for firewood endangers people in the settlement.

Military personnel from nearby barracks and local people assault female refugees when they venture into the forests in search of firewood, says Teddy Namirimu, a SAFE officer with NSAMIZI, which teaches people about the benefits of the stove and how to use them.

“So we are bringing energy closer to them to reduce their insecurity,” she says.

That’s a common challenge for girls and women who live in settlements and camps for displaced people and refugees, as well as for those living in conflict-prone areas. There are widespread news and research reports noting the link between sexual assault and firewood collection. Numerous experts and refugee aid groups have suggested alternative fuel and cooking options as effective tools in combating sexual violence.

Kyaka II’s stove and briquettes facility could also help end chronic hunger. Firewood is scarce, and when it can’t be found, people in the settlement often go without meals.

“Our worries of traveling long journeys for firewood will be over,” says Beatrice Akimana, a refugee from Democratic Republic of Congo. “Each day that passes, we ponder on what we are going to use for cooking the next meal. At times we skip a meal for lack of firewood. The village is now bare, there is no dry stick.”

The UN and Uganda’s Office of the Prime Minister in July 2015 contracted with ADAPT+ Limited, a local green energy company, to produce energy-saving stoves from clay and briquettes from agricultural waste.

The company has distributed 1,000 stoves for free as part of a pilot program, and it produces four tons of briquettes each day, all made from a biomass of sawdust and maize cobs, according to Barnabas Bwambare, a supervisor at  ADAPT+. The factory employs 24 refugees to make the stoves and briquettes. 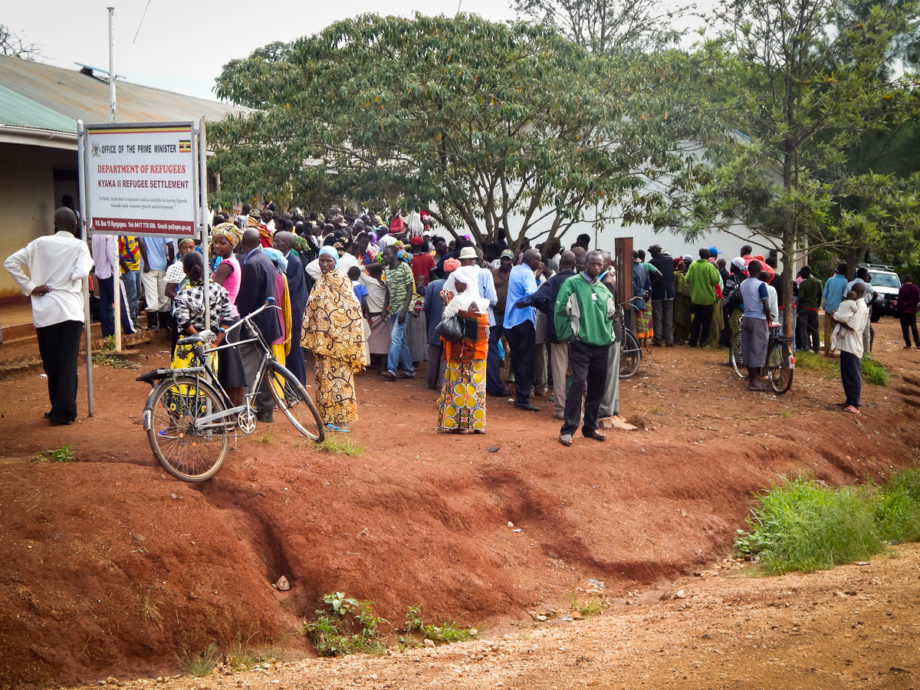 Refugees from Burundi stand in line for registration at Kyaka II, a refugee settlement. An influx of refugees has increased pressure on the environment in the surrounding area, officials say.

More than 500,000 refugees and asylum-seekers are in Uganda, according to UNHCR. The Kyaka II settlement, at over 80-square kilometers and one of at least 10 settlements and camps in the country, was established in the early 1980s to host refugees from Rwanda and DRC, according to a February report from the Ugandan government. Refugees at the settlement are allotted plots of land, where they can build homes and grow food. Wood is the primary source of fuel, according to the report.

The area has been cleared of wood, which poses a threat to food production in the area, he says.

“The area is now bare but this was not the case when they had just come. It is their search for firewood that has transformed the place like this,” he says.

The briquettes will do more than preserve what wood is left in the area. They’ll also prevent respiratory tract infections because they are smokeless when they burn, says Isaac Ocotoko, a UNHCR program associate at the settlement.

The area is now bare but this was not the case when they had just come. It is their search for firewood that has transformed the place like this. Davis Mugumya, a livelihoods specialist at UNCHR

In three years, Kyaka II’s refugees are expected to have moved from traditional cooking methods to using energy-efficient stoves and briquettes. Some refugees are also learning how to make the clay stoves, says Ray Chikwanda, who, at the time of this reporting, was the head of the local field unit at the UNCHR. He has since moved to another post.

After an initial supply of free briquettes, those will be available for purchase at 300 Ugandan shillings (9 cents) per kilogram, Bwambare says. A kilogram (2.2 pounds) of briquettes is considered enough fuel to cook three meals.

Janeatte Ngwasi, a refugee from Burundi, says the stoves and briquettes will transform her daily life.

“A day rises and one cannot imagine where to go in search of wood because most of the nearby forests have been cleared for farming and settlement,” she says. “We have the food but we lack the means to cook it.”

Edna Namara, GPJ, translated some interviews from Luganda and Runyankole.