KAMPALA, UGANDA — Night after night, Annet worries about contracting HIV. The single mother has moonlighted as a sex worker for years to supplement her income as the owner of a retail shop and support her young daughter. The viral threat looms each time she meets a client, particularly if the man offers to pay more to forgo using a condom — money she can’t always afford to turn down.

One afternoon last year, Annet’s friend, a fellow sex worker, called, her voice tinged with excitement. Annet was sitting at her shop, surrounded by handbags, hoping for her second retail customer of the day. As her friend recounted a news story she’d heard on Luganda-language radio, Annet felt hope rise inside her. “Finally,” she remembers thinking, “there was a new HIV-preventive drug, a better option that I needed.”

Annet’s hopes rested in cabotegravir, an injectable drug that could shield her from the virus that causes AIDS. While other drugs can stymy the virus pre- and post-exposure, they require continuous pill-taking. One cabotegravir shot lasts for two months, which would make it easier for Annet to consistently keep herself safe. (She asked to be identified only by her first name to avoid stigma and because sex work is illegal in Uganda.)

Cabotegravir was successfully tested in adults in seven sub-Saharan African countries, including Uganda, in trials that ended in 2020. The World Health Organization has endorsed it, and United States regulators have cleared it for use with a doctor’s prescription. But Annet still can’t get it. No Ugandan can. That’s because the drug remains tied up in the country’s regulatory process.

Across Africa, drug approval often takes substantially longer than in the U.S. and Europe. The timeline from first submission of a drug to final approval in the U.S. is usually less than a year. In some southern African countries, the same process stretches as long as two-and-a-half years for generic drugs, even though they are replicas of established products, according to a study in Frontiers in Medicine, an international medical journal. Other research suggests the delays may be even longer. Researchers blame a lack of resources and expertise at African regulatory bodies and a failure to piggyback on efforts by other agencies.

The holdups can rob Africans of access to safe and affordable medicine, and put vulnerable groups at risk for longer than necessary. In the case of cabotegravir, the lag time may also hamper the Ugandan government’s ambitious HIV-prevention targets — including ending new infections by 2030 — as the drug is one of the best prospects for stopping transmission in high-risk groups, such as sex workers. “Cabotegravir would help the country achieve its goal,” says Nelson Musoba, general director of the Uganda AIDS Commission.

In general, Uganda’s drug-review agency, the National Drug Authority, assesses applications within six months of their submission, says spokesperson Abias Rwamwiri. “However, the approval process largely depends on the quality of submission,” he says. Cabotegravir’s was filed close to a year ago, according to its maker, although the drug authority declined to confirm that. “People need this option, and studies have proven it works,” says Shakirah Namwanje, policy research and advocacy officer at the Uganda Network of AIDS Service Organisations, an umbrella organization for civil society groups. “Why the delay to approve it?”

Annet has tried everything she can think of to curb her HIV risk, but economic realities sometimes thwart her efforts. While the virus is no longer a death sentence, nearly everyone who is infected must take multiple pills every day for the rest of their life, lest the virus multiply, shred their immune system and make them susceptible to dire illnesses like cancer. Not everyone can stick to that regimen or bear the stigma that the virus still carries in Uganda, where even healthy-looking people with HIV are shunned as “dead bodies.” 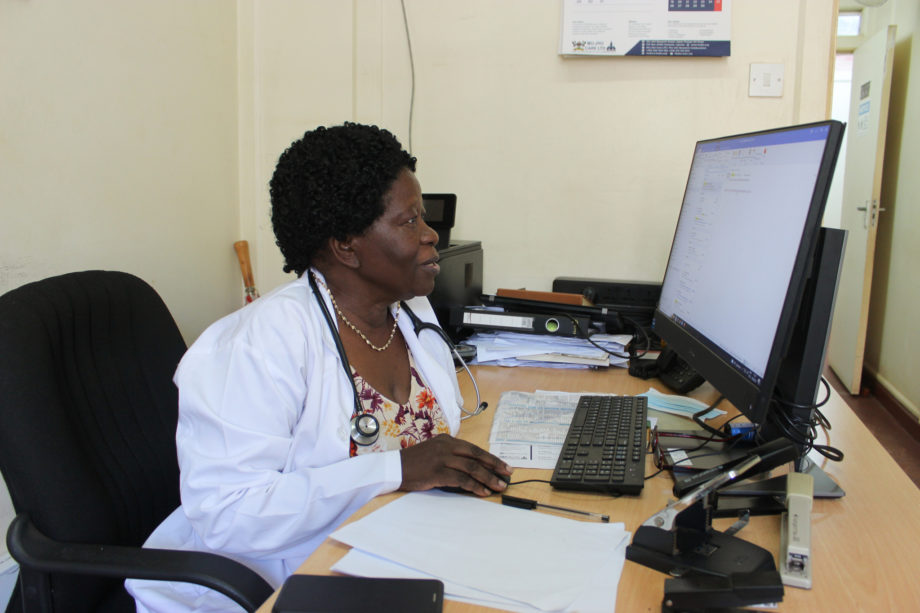 Dr. Clemensia Nakabiito led a team in Kampala, Uganda, that tested injectable cabotegravir, a drug that could protect people from the virus that causes AIDS.

Annet is a tiny woman in her late 20s; as she talks from behind the counter of her shop, she throws her hands here and there and laughs loudly. She says she prefers to use condoms during sex work, but sometimes she relents — many clients are willing to pay double for unprotected intercourse. Afterward, she uses a pill known generally as PEP, or post-exposure prophylaxis. Were she infected, the medication could essentially halt the virus’ march through her body. However, Annet must start the drug within 72 hours, continue taking it for 28 days, and abstain from unprotected sex the entire time. That’s money lost and bills unpaid.

Relatively few Ugandans use post-exposure drugs, even though they are free at government health centers. Dr. Clemensia Nakabiito, an HIV researcher, blames “pill fatigue” — when people quit their medication because they’re sick of taking it — and the cultural shame surrounding the virus. A similar fate has befallen pre-exposure prophylaxis, known as PrEP, preventative HIV medication available in about six dozen countries. The United Nations hoped 3 million people would be taking preventative HIV drugs by 2020, but according to AVAC, an HIV advocacy organization based in the U.S., only 1 million were. (Annet doesn’t use it because, for her, it’s not easily accessible.)

Enter cabotegravir. A health practitioner could administer the drug every two months via a shot in the buttocks; a patient could get injections for as long as she needed them. Starting in 2017, ViiV Healthcare, a company based in the United Kingdom, ran drug trials in Africa with roughly 3,000 participants — all of them women 18 to 45 years old. (ViiV also ran trials on other continents.)

In sub-Saharan Africa, women and girls account for 3 in 5 new HIV infections. Of particular concern are young women, who are three times more likely than their male peers to become infected. “Most girls in this age group are not empowered enough to encourage their sexual partners to wear condoms,” says Musoba, the AIDS Commission official, “so the power is left to men.” 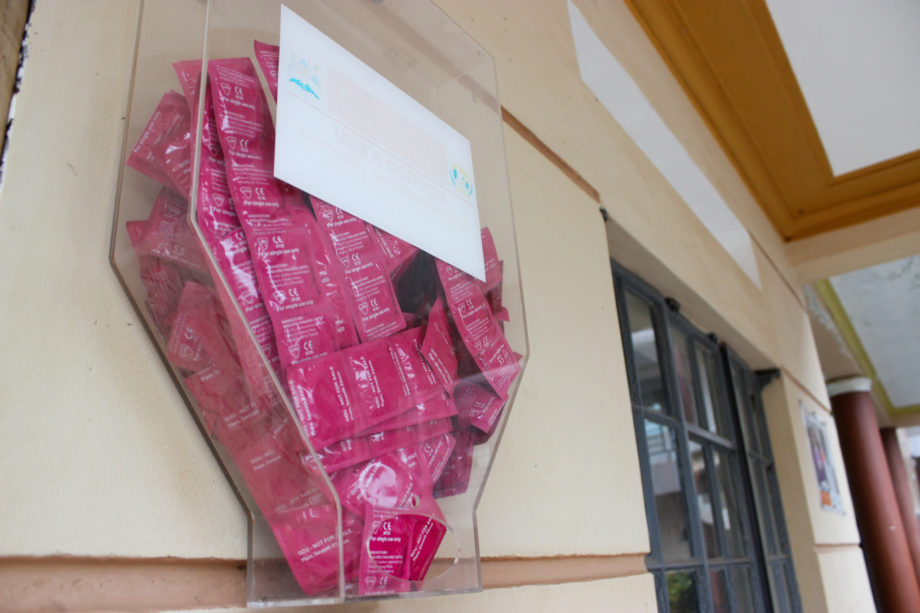 As part of the government’s HIV prevention efforts, a case with free condoms is set up at a hotel in Moroto district, Uganda.

In the trials, some participants were injected with cabotegravir, while others took a preventative pill. In the cabotegravir group, the rate of infection was 88% lower, according to results published in the international medical journal The Lancet. Nakabiito, the HIV researcher, oversaw a trial team in Kampala, the capital, which was a joint effort of Makerere University in Uganda and Johns Hopkins University in the U.S. “Cabotegravir provides a new option,” she says. “It also comes with a certain level of privacy, especially for women who are among the most vulnerable groups, particularly those who need to seek permission from their spouses to seek treatment.”

Sarah is in her early 30s and stuck in an unhappy marriage; on her own, she couldn’t provide for her kids financially. Over the years, she’s found solace in extramarital affairs, but she fears they could expose her — and, by extension, her family — to HIV. (She asked that only her first name be used because her husband doesn’t know about the affairs.)

Sarah doesn’t use preventative HIV drugs, lest her husband discover them. Once, she got post-exposure pills after having unprotected sex, but only took them for one week of the recommended month. “I was stressed in that week,” she says. “I was very conscious of where my handbag was all the time, making sure that my husband who occasionally looked for pens from my bag couldn’t find it.”

Access to cabotegravir injections would give Sarah — and many other women — an unprecedented degree of sexual self-determination, a way to guarantee their safety without a male partner’s buy-in. “I would have the freedom to have sex whichever way I want it and not worry so much later on if I had contracted the virus or not because I didn’t use a condom,” she says.

Getting any drug to Africa’s Annets and Sarahs is no easy task. Drug regulation on the continent involves a patchwork of agencies whose quality and resource levels vary widely from country to country. According to an article in the international Journal of Pharmaceutical Policy and Practice, “only 7% have moderately developed capacity and over 90% have minimal to no capacity” to review medical products. Even so, countries often don’t consider the regulatory decisions of their neighbors, thereby duplicating efforts and lengthening review time.

African regulators are well-versed in evaluating generic drugs, which are cheaper than new drugs and therefore serve a key goal: increasing the continent’s supply of affordable medicine. But that also means regulators are less seasoned at assessing new products, the journal article says, which can keep innovative drugs, such as cabotegravir, off-market for longer than necessary. 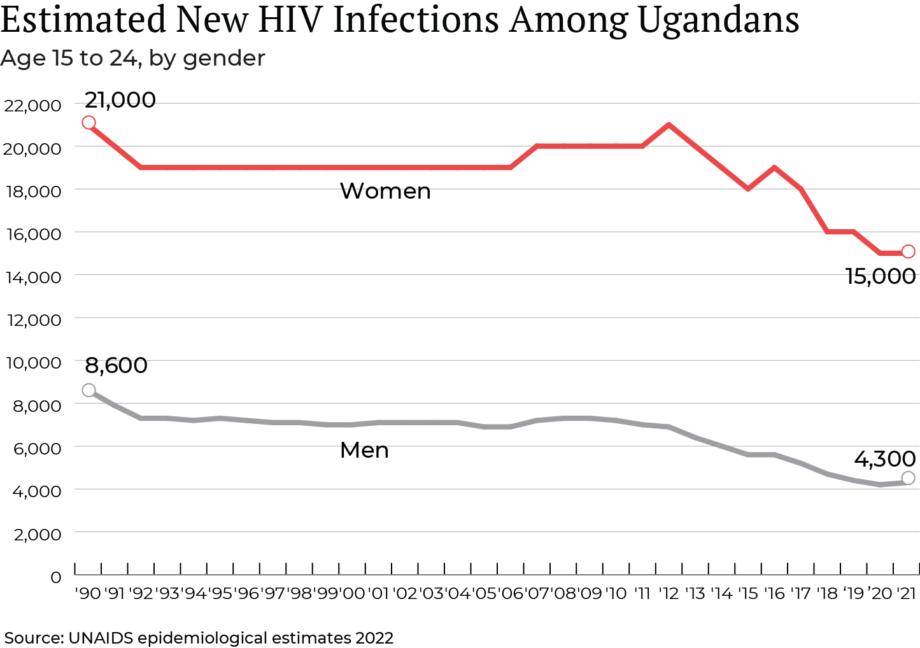 In 2020, according to the World Health Organization, Africa was home to about 11% of the world’s people, but 60% of those living with HIV or AIDS. To snuff out the virus, countries must work together, says Charles Brown, executive director of Preventive Care International, a Ugandan nongovernmental organization that focuses on HIV. “This could increase the capacity of national regulatory authorities and could definitely fasten the process of drug approvals in Africa.” That’s also the thinking behind efforts by the African Union, an alliance of countries, to streamline drug approval.

In recent years, the union has laid the groundwork for an African Medicines Agency, a continent-wide regulatory body for medical products. The AMA isn’t a substitute for country-specific regulators. Rather, it would coordinate their efforts, much like the European Medicines Agency does for its member states. However, the African Union has struggled to get governments on board. Of 50-plus countries, less than half have ratified the AMA treaty. Uganda joined in 2021.

As of November, ViiV Healthcare had submitted applications to market cabotegravir to more than a dozen regulatory bodies worldwide, including Uganda’s. Only four had granted approval. However, even approval does not guarantee widespread access. There is no generic version of cabotegravir and, in the U.S., the drug costs $3,700 per dose, according to an editorial in the international scientific journal Nature. That’s $22,200 a year — more than 35 times the average Ugandan’s salary.

ViiV vowed in a statement to sell cabotegravir at a “not-for-profit price” in sub-Saharan Africa, but it’s unclear what that might be, or whether governments would cover the entire cost. This is a scenario, says Mitchell Warren, executive director of AVAC, where continent-wide collaboration could improve drug availability. “If countries come together, then there is a high volume and more buying power,” he says.

As for Annet, she is sticking to time-worn precautions. She has a roster of regular clients whom she trusts, but if she goes a week without an appointment, she hits the streets to find new prospects. She says, “Those who look sickly, have red lips, sores on their bodies — particularly lips — small boils on their faces and other sickly ways, I will not take them on because I think they are HIV-positive and are not on medication.” It’s not a failproof option, but it’s the option she has.