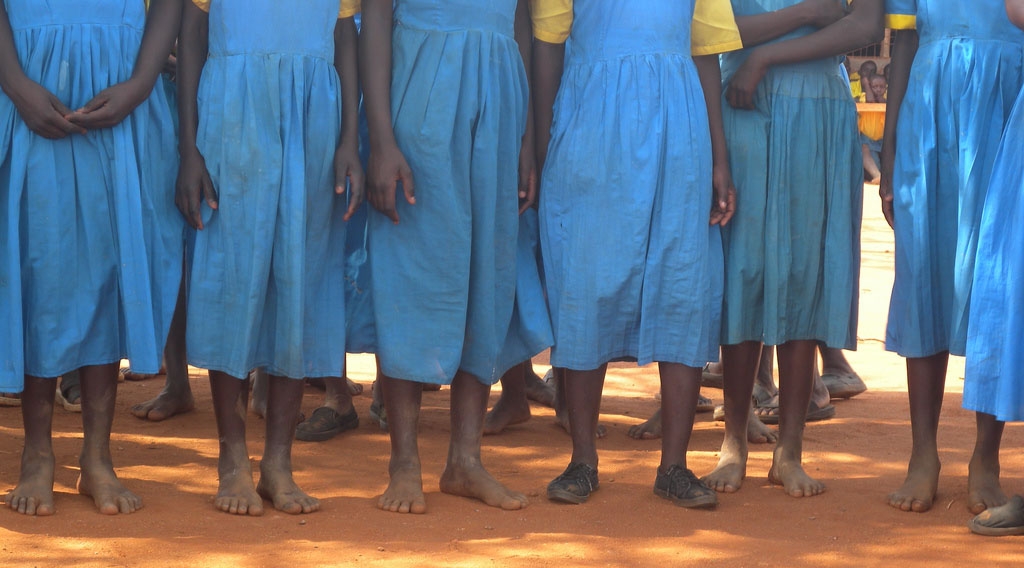 GULU, UGANDA – Just before Christmas, Irine Ayot, 42, found out that her 14-year-old daughter, Evelyn Acan, had been defiled.

Ayot, who earns a living selling fish and other goods at a market in Gulu, a district in northern Uganda, says she was waiting for Evelyn to pick her up after work, but her daughter never showed up. Ayot, crippled from a land mine explosion, sought help from someone else to carry her fish and other items home.

But when she arrived at their home in Alokolum, she didn’t find her daughter there. She says she became worried about what could have happened to her. She asked the neighbors, but nobody had seen Evelyn. She contacted the police, then decided to walk from door to door in her neighborhood to try to find her.

She soon found Evelyn at the home of a 25-year-old motorcycle taxi driver. Ayot says she didn’t know the man but learned that he was her daughter’s boyfriend. Angry, she told her daughter to come home. That was when the man’s family informed her that her daughter was pregnant.

She says she didn’t want to believe them, but later a medical test proved their claim. She went straight to the central police station in Gulu and reported her daughter’s boyfriend, telling police where to find him. The police arrested the man and charged him with defilement for having consensual sex with a minor. He is currently in jail, and the investigation is ongoing.

Although a protocol is in place for reporting defilement cases here, police say a lack of and late reporting hinder them from investigating cases. Some people say their parents are too ashamed to report cases, while other parents say they don’t have the time and money necessary to follow up cases with police. Hospitals provide free care and testing to patients who experienced defilement, although doctors are not always available to administer time-sensitive treatment. In the justice system, familiarity with the suspect can aid in convictions, while lack of evidence or birth certificates hampers other cases.

Uganda’s Penal Code Act defines defilement as the performance of a sexual act with someone who is younger than 18.

Last year, a total of 340 defilement cases were reported in Gulu district, says John Bosco Ozele, the police officer in charge of crime in the district. This was 22 fewer cases than reported the previous year, which Ozele attributes to community awareness programs that have been conducted by police and various nongovernmental organizations.

Ozele says that cases of defilement increase during the holidays because students are on vacation from school. He says this trend continued during this past holiday season.

Christine Apiyo is the officer in charge of the Child and Family Protection Unit at the police station where Ayot reported her daughter’s defilement. These units, located at most police stations across the country, aim to protect the welfare of the child in cases such as defilement.

Apiyo says that when police receive a defilement report, they conduct an investigation. They record statements from the person who was defiled, the suspect and any witnesses. To determine the validity of the case, they take the complainant to receive a medical examination to see if there was penetration, visit the crime scene and check the mental status of the suspect. If they determine that the case is valid, they draw up a statement charging the suspect and summon the parties and witnesses for a court hearing.

But Apiyo says the police face challenges in following up cases because people who have been defiled don’t always report their cases. Or sometimes cases are no longer valid if they’re reported more than 90 days after the incident occurred.

Even when children or their guardians do report cases to the police, Apiyo says that sometimes parents fail to follow up on the cases because of the time and money it takes to cover the distance to Gulu town, which has a bigger police station with more services.

Such was the case for Lakop Christine, who says her daughter was defiled in 2003. She gave up on her daughter’s case because she couldn’t sustain the trips to the police station to follow up on whether police had arrested the suspect. She says police asked her for money for transportation or phone airtime to investigate her daughter’s case, which she couldn’t afford.

“In the end, I realized that it wasn’t worth it, as I didn’t have money for all these,” she says.

Police here say they work closely with Gulu Regional Referral Hospital and clinics in Gulu to prevent transmission of sexually transmitted infections and diseases and to make sure they receive counseling. Ozele says medical personnel conduct tests for sexually transmitted diseases and give the people post-exposure prophylaxis, an antiretroviral treatment to prevent them from getting HIV.

“We do medical test for HIV/AIDS for both the [suspect] and the victim to check if any of them has HIV,” says Dr. Ben Watmon, who works at Gulu Regional Referral Hospital on defilement cases.

Dr. Beatrice Aber, who works in the HIV testing facility at the hospital, says that girls also receive a pregnancy test.

“We also provide psychosocial support because most of the rape victims who come to hospital are injured,” she says, adding that some cases are very violent.

But Apiyo says that sometimes the doctors are not available to do the tests, so some people miss receiving the time-sensitive treatment. Post-exposure prophylaxis must be administered within 72 hours of the incident to be effective.

“It would be better if we kept the PEP at the police station so that they are immediately given to victims,” Apiyo says.

Giovanna Lamunu, a lawyer in Gulu, says courts follow the Criminal Procedure Code Act once police advance cases to the justice system. Defilement cases require a police report, medical examination, and the sanctioning and arrest of the suspect to proceed to court.

She says that sometimes the aggrieved party wins the case because parents know the person who has defiled their daughter and can provide all the necessary information about the suspect in court.

“Sometimes, the case is sorted out of court,” she says.

Other times, she says that cases are lost because of insufficient evidence. This could be because of their lack of awareness of how to preserve evidence or if they don’t report the defilement to the police in time for them to collect evidence. Some people who were born at home don’t have birth certificates, making it hard to prove their age, which is a key factor in defilement cases.

“There is need for strong measures to protect the children, and parents must also play an important role in protecting their children,” Ozele says.

Apiyo agrees that it is also the responsibility of parents to educate their daughters. She says parents must warn daughters against being lured into having sex with boys and men in return for useless things.

Ayot says that she has spoken to her daughter about sex and that the police are on the radio almost daily talking about sexual violence and encouraging children to abstain from sex, which could lead to unwanted pregnancies and sexually transmitted diseases. But she says that her daughter didn’t listen and she doesn’t think that other children are listening either.

Evelyn is currently not in school, which doesn’t allow pregnant students. Ayot says she is willing to take care of her grandchild when he or she is born so that her daughter can go back to school.

“I want her to get an education,” she says.

She says Evelyn wants to study, but for now her daughter’s biggest wish is for her boyfriend to be released from jail so he can take care of her during her pregnancy and of her child after she gives birth.