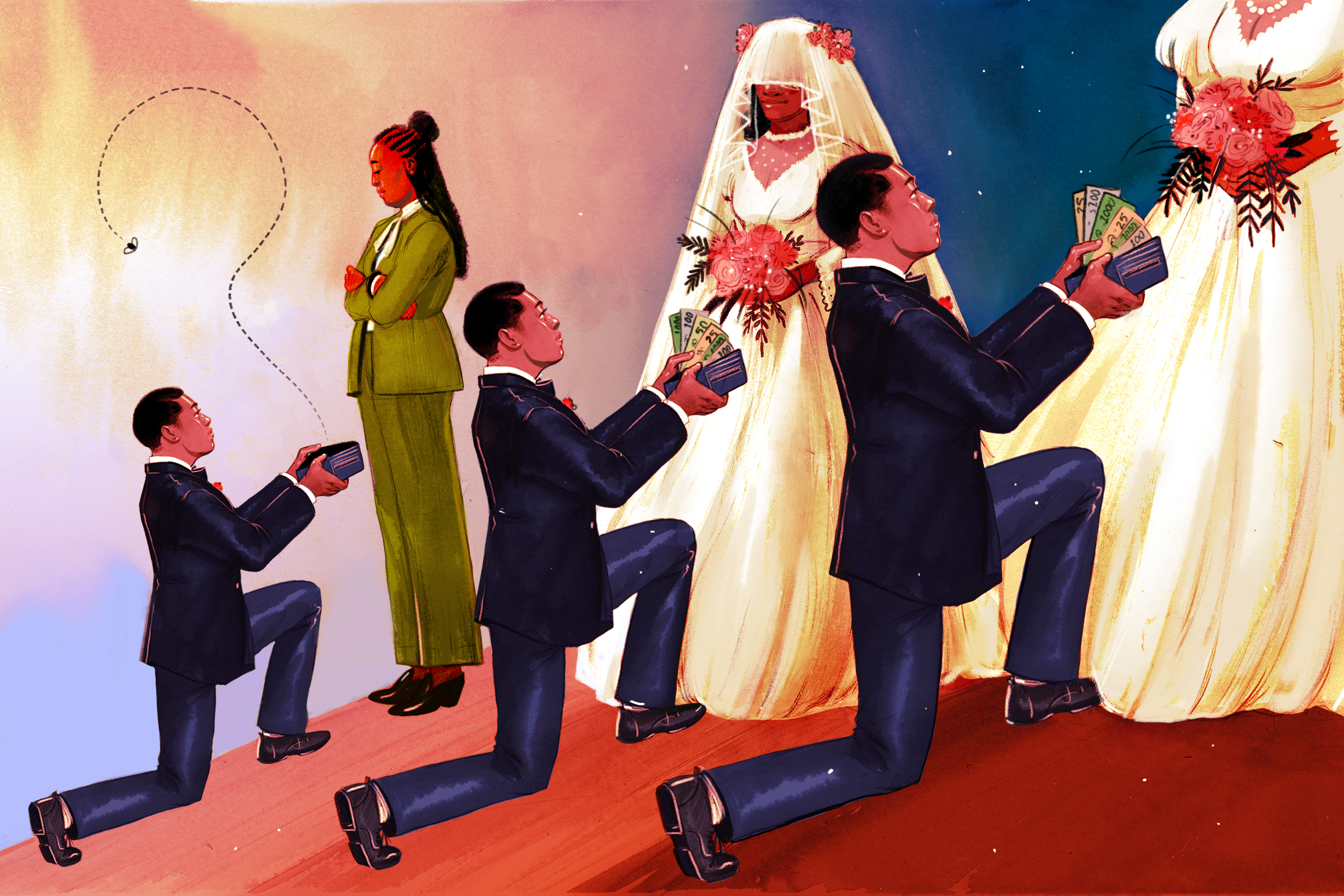 “But she is well-educated,” her uncle says to the groom’s family. “Think of the financial benefits this will bring to your family.”

At 34, Anek is old to be a bride. So old, in fact, that her groom is not willing to pay anything to her family in exchange for marriage.

“I would want my bride price to be paid for, but my in-laws do not want it,” she says. “I was told that I am not so young, so chances are I may not have a child.”

But even without a bride price, she says she’ll still marry this groom.

“I am not getting any younger,” she says.

In Uganda, custom requires a groom’s family to pay the bride’s family a “bride price” to compensate them for the loss of a woman’s labor around the house. Payment comes in the form of gifts, money or a combination of both; and the marriage isn’t valid until a bride price is paid. Depending on many factors, including the family’s tribe, financial situation and the bride’s age, common bride prices range from 2 million Ugandan shillings ($540) to 20 million shillings ($5,400).

Ugandan courts have, for the most part, upheld the custom when challenged. But in 2015, the country’s highest court banned the practice of husbands asking for a refund of the bride price when the marriage ends. Delivery of the original payment is legal – but the refund was deemed unconstitutional as it would deny a woman her equal rights. As opponents argued, the practice “leads [men] to treat their wives as mere possessions.”

But the ruling is rarely enforced.

In 2017, the controversial Marriage and Divorce Bill proposed punishment of up to a year in prison for any man who demands a bride price refund. The bill has yet to be passed by parliament.

Viola Wamanya, 31, always hoped she would marry in her early 20s, right after finishing school.

“I honestly don’t know where the time went,” Wamanya says. “I had been wrapped up in work, always saying I will get married when I can support my family.”

More women are waiting to marry, as rates of women in graduate school and in the workplace grow here.

But waiting to marry had consequences, Wamanya says.

“I know the shame it brought to my family, and the necessity to marry me off quickly when I became 31,” she says.

According to a 2011 national demographic and health survey, bride prices for girls as young as 15 are on the rise, though the legal marriage age is 18.

Once a woman is over 30 though, the price tends to decrease.

Ivan Semanda, a father, says there is a right time to get married. “It brings shame to a family if a woman is not wed at the right age, which is between 23 to latest 29,” he says.

And if a woman waits past the age of 29, he says the price will always be low, or even nonexistent.

“There is little to negotiate about. If she was younger, it would be a different story.”

Lawyers and activists are fighting the trend, but say they don’t have much hope.

“If a parent can say that a woman is worthless because of her age, we still have a tough journey ahead for equality,” says Flavia Zalwango, a programs director at the Human Rights Awareness and Promotion Forum.

She says the only way forward is to eliminate the bride price tradition altogether.

“Any dowry paid for a bride is a setback for gender equality,” she says.

“It is not going away in the next 100 years,” she says. “But there is power in educating women and girls about their value.”