Skip to main content
The story you are reading was published on Monday June 6, 2016. To read more recent stories click here. 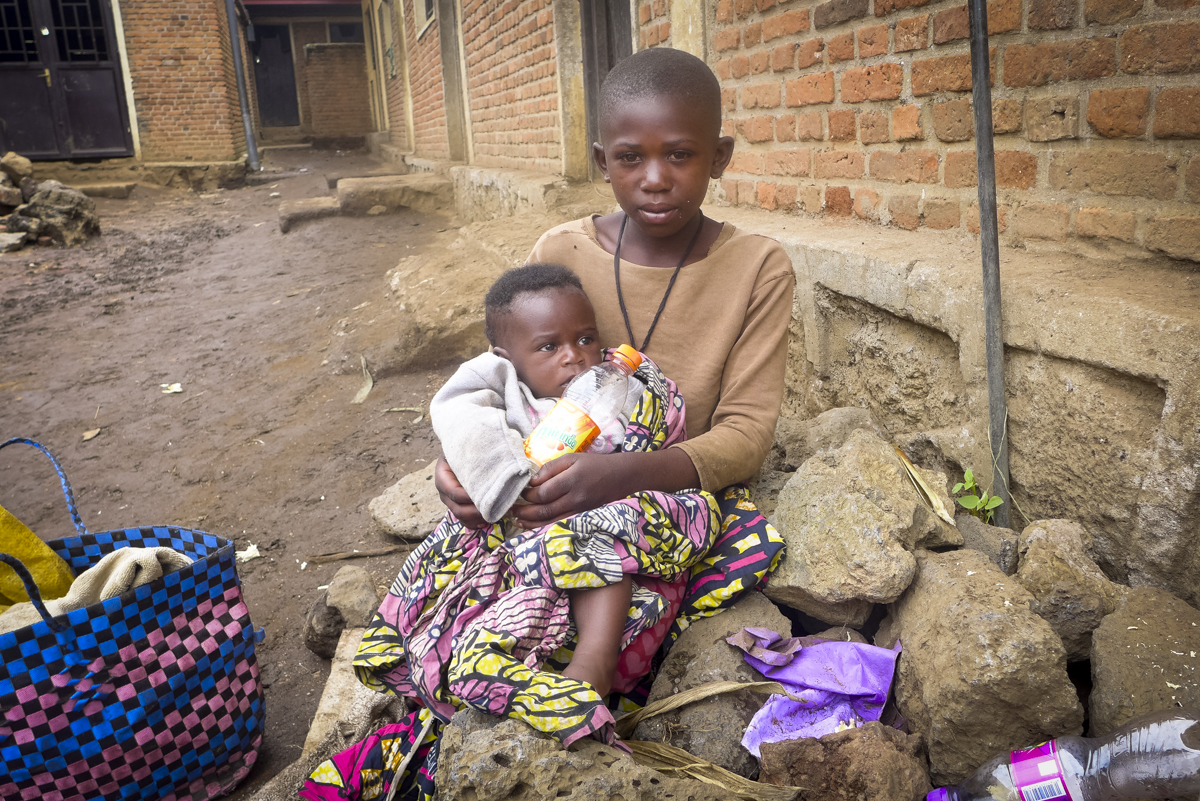 GISENYI, RWANDA — The area near Rwanda’s border with Democratic Republic of Congo is filled with pedestrians and children.

There’s a constant flow of people at La Petite Barrière, one of two checkpoints between the countries. Rwandan women from villages near the border account for much of that foot traffic.

As petty traders, the women crisscross between the two countries carrying large baskets of fruits, corn and other food on their heads to sell in DRC, where such commodities are in higher demand.

I come here every morning with my kids. I leave them here before crossing the border. It’s only when I finish selling my vegetables around 5 p.m. that I come back and find them here.Olive Murekatete, a single mother, who says she has no choice but to leave her kids, ages 2 and 7, alone near La Petite Barrière every day

As a result, the immediate area near the Rwandan side of the border is a day care of sorts, filled with children ranging in age from infants to teens. They’re dropped off here and forced to fend for themselves during the day while their mothers leave the country to sell their goods. The mothers say their jobs, which involve exhausting hours of walking the streets or even defending themselves in turf battles, can’t be done if their children are with them.

At the border, some kids carry their younger siblings on their backs. Others sit in the dirt and wait.

Olive Murekatete, a single mother, says she has no choice but to leave her kids, ages 2 and 7, alone near La Petite Barrière every day.

“I come here every morning with my kids. I leave them here before crossing the border. It’s only when I finish selling my vegetables around 5 p.m. that I come back and find them here,” Murekatete says.

Her daughter keeps a close watch over her young brother all day.

Murekatete says her family’s economic situation leaves her without other options.

“Of course, when I leave my kids alone I honestly get scared. But every morning I pray for God Almighty to watch over them,” she says. 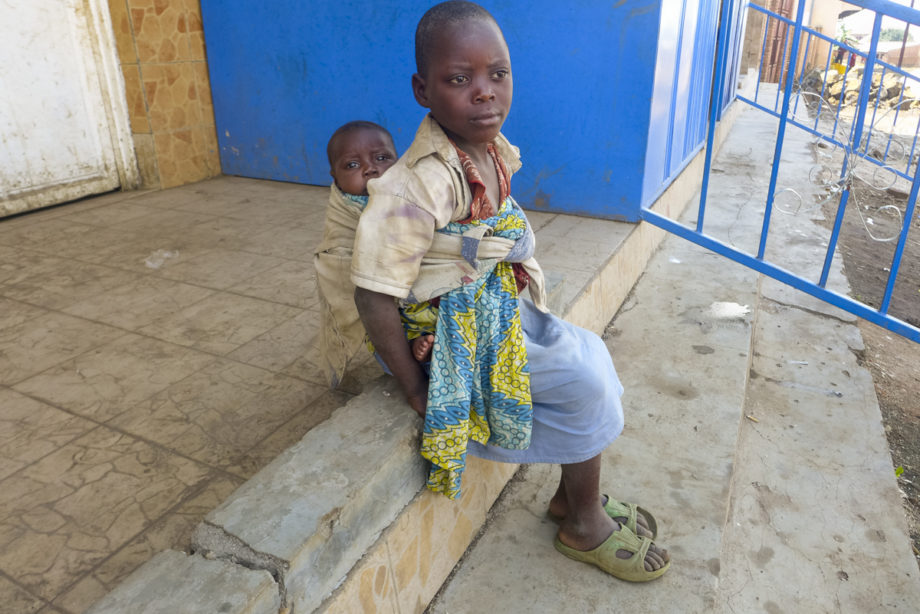 A child cares for another, smaller child at Rwanda’s border with DRC. Many children wait at the border’s Rwandan side as their mothers work in DRC

Children of all ages struggle to endure days waiting at the border.

“My mom crossed the border to sell cucumbers. She left the baby with me,” says Monica Muragijimana, 11 who looks after her 18-month-old brother. “When the baby cries I try to soothe him by offering a piece of banana or biscuit.”

As more children join the group at the border, Rwanda’s National Commission for Children (NCC) is considering options for an early childhood development program that would establish day care centers in border communities, says Cartas Mukanyamwasa, a social worker with the NCC in Gisenyi.

“The program will allow children to spend their days in places meeting safety standards and access basic education,” Mukanyamwasa says.

Under the proposed program, older children who don’t currently attend school because they care for their younger siblings would have an opportunity to do so, Mukanyamwasa says.

My mom crossed the border to sell cucumbers. She left the baby with me. When the baby cries I try to soothe him by offering a piece of banana or biscuit. Monica Muragijimana, 11 who looks after her 18-month-old brother at the DRC-Rwanda border

Rwanda offers universal access to primary education, but some parents say they cannot send their children to school if they cannot afford food. Plus, they say, the older children must care for the younger ones.

“How can I send my kid to school when there is nothing to eat in our home? My No. 1 priority is to find money to feed my children,” Murekatete says.

According to UNICEF, about 11 percent of boys and 12 percent of girls in Rwanda participate in pre-primary programs, which include preschool and kindergarten. Those low participation rates are due to poverty, experts say. Nearly 30 percent of Rwandan children are involved in child labor.

On March 26, Rwandan President Paul Kagame visited the Rubavu district, which borders DRC, and said that school-aged children here are denied an education because their parents rely on them to work or care for younger siblings.

Kagame said in that speech that parents and teachers must do everything they can to ensure that children have full access to education. The president suggested that parents might be punished for not sending their children to school.

Local leaders are also pushing families to send their children to school. 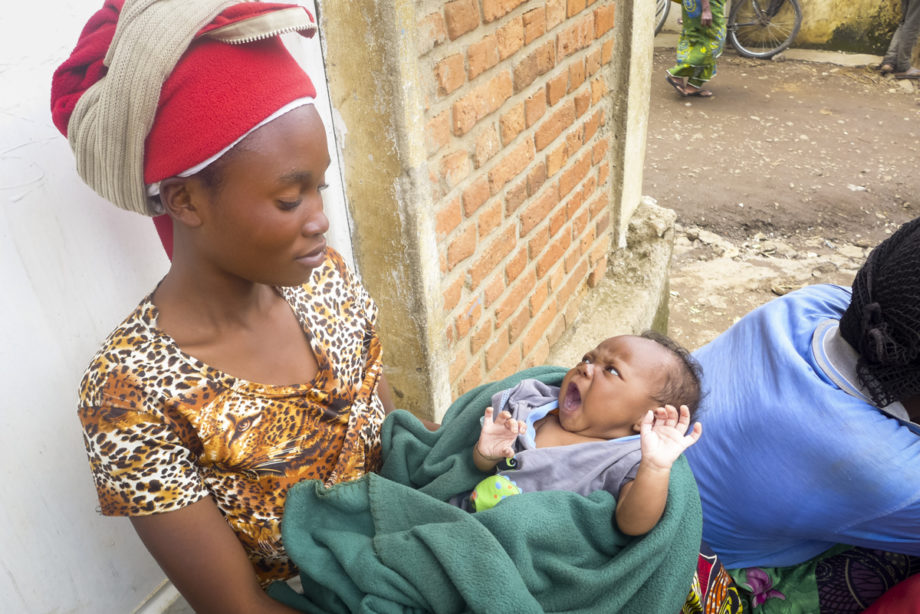 A baby cries after his mother left him in the care of another woman at Rwanda’s side of the border while she works in DRC.

Claire Zaninka, the executive secretary of Muhira sector, a village close to Gisenyi, says that Rwanda is aware of the women leaving their children at the border and is working to offer some solutions. Executive secretaries report to the district mayor about happenings in specific communities known as cells.

“We are raising awareness of family planning, organizing training on how to save money and sensitize people on the need to send children to school,” Zaninka says.

But the situation is more complex than just school or no school, Murekatete says.

Food, she says, is her biggest challenge as a parent.

“If I had the wherewithal, my daughter would now be in school, but there’s nothing else I can do for her because she has to assist me in raising her little brother. I have to make sure that they have something to eat,” she says.

If a mother leaves a younger child she might pay as much as 300 Rwandan francs (about 40 cents) when she returns, the babysitters say. Older girls who babysit say they often care for three to five kids each day.

Mariam Nyirahabimana, 26, babysits at the border, but says providing food for the children is a challenge.

“When a kid’s mother delays returning, I give the kid cold porridge or sorghum beer. Should the kid be too young to eat, I give the baby some water to drink while waiting for the mom to come,” she says.

The mothers who leave their children at the border say they are hopeful that other solutions will emerge.

“We hope we will find a solution that will allow us to afford to send our children to school and also keep engaging in our routine trading activities to be able to feed them,” Murekatete says.