Skip to main content
The story you are reading was published on Monday May 25, 2015. To read more recent stories click here. 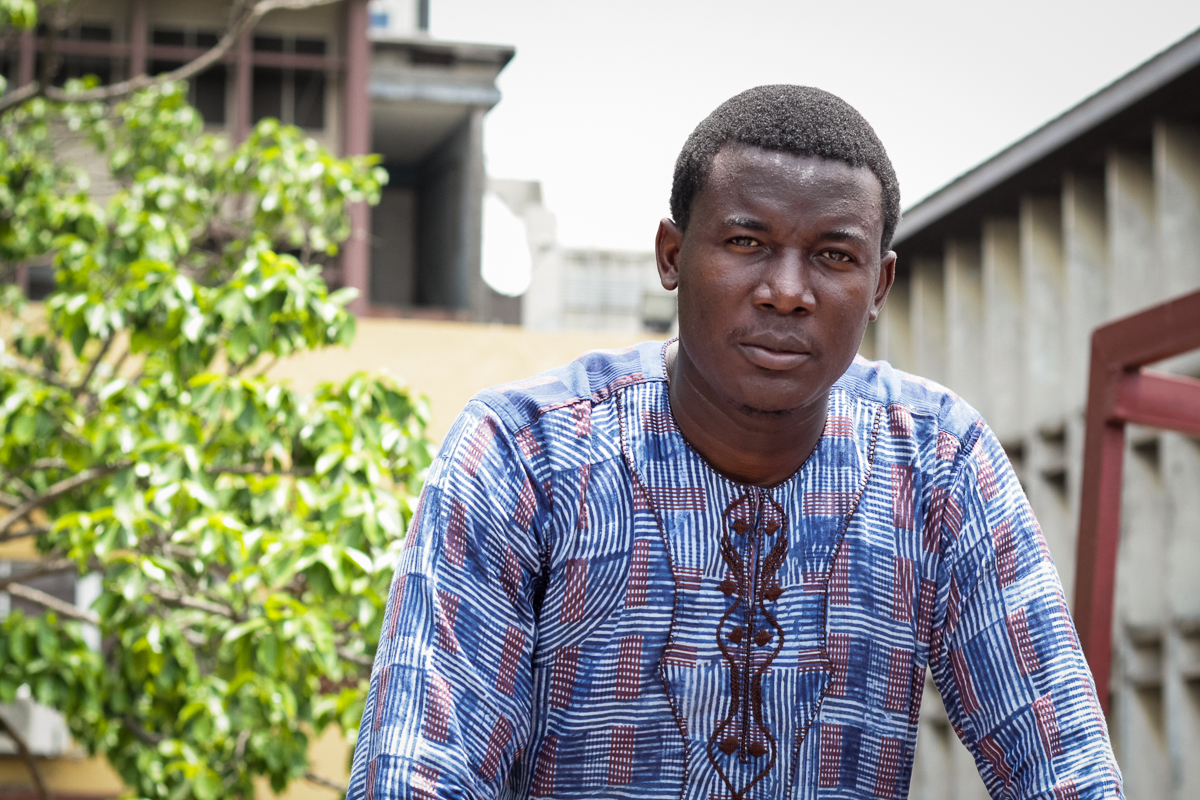 LAGOS, NIGERIA – Kola Tubosun is a walking font of stories. He illustrates much of what he says with stories about growing up Yoruba, stories about his love for languages, and more.

“Our house was always full,” Tubosun says. “There were always people around – uncles, aunts, grandmothers. And they were always speaking Yoruba.”

In fact, his home in Ibadan, the capital of Oyo state in southern Nigeria, was one of the few places where Tubosun could speak the language that he shares with about 18 million people in Nigeria and 2 million more around the world.

He wasn’t allowed to speak Yoruba in school, he says. Students caught speaking it were fined.

One of his most embarrassing moments occurred when his father visited his school, Tubosun says. The children initially greeted him in English, the lingua franca of Nigeria, saying, “Good morning, sir!”

“He replied in Yoruba, ‘Emi o gbo Ebo o,’ meaning that he did not understand English,” Tubosun says. “Then the students responded in Yoruba.”

Though he chuckles when he tells the story, Tubosun hung his head in shame when it happened, he says.

Today, Tubosun is dedicated to preserving and spreading knowledge of the Yoruba language. He is developing an online collection of Yoruba names, which he calls a point of entry to the language and culture of the Yoruba, his people and one of Africa’s largest people groups.

He started www.yorubaname.com, a website that will feature a dictionary providing the meanings, pronunciations, spellings and etymologyof Yoruba names.

The public will help in the process: Crowdsourcing will build an exhaustive collection of Yorubanames – the first of its kind.

“I was the first child born into the new house that was built by my parents,” Tubosun says, seated amid works of art at Terra Kulture, a cultural center in Lagos, the city where he now lives and works.

Tubosun altered his name when he created a Yahoo account in 1999. The Yahoo program did not allow him to choose Kolawole Olatubosun; instead it offered Kola Tubosun. Spoken separately, his names have separate meanings, but when his first and last names are pronounced together in the way Yahoo merged them, they mean: “Let wealth keep moving.”

“Yoruba people don’t just give their children names,” he says. “The names have meanings.”

Tubosun has commonly used the shortened name ever since, keeping his birth name for official documents.

Tubosun teaches English language at a secondary school. He has taught Yoruba in the U.S.

Many regional languages are dying. About 3,000 spoken languages will become extinct by the end of the century if nothing is done, the U.N. Educational, Scientific and Cultural Organization estimates. Yoruba may be an endangered language, research indicates.

Tubosun’s work doesn’t just catalog Yoruba names, says Marc-André Schmachtel, director of the Lagos branch of the Goethe-Institut, a German cultural and language institute where Tubosun presented his project at Social Media Week 2015 in February. It helps preserve the Yoruba language and culture.

Nigeria has many distinct groups, but visitors to Lagos won’t see local languages in public places.

“You rarely see road signs, for instance, written in local languages,” Schmachtel says. “Everything is in English. By promoting the names, you promote the language and culture of the people. So, research into Yoruba names is a way of understanding the Yoruba culture.”

Tubosun became interested in curating Yoruba names in 2005, during his final year of studies in linguistics and African Languages at the University of Ibadan.

“I did not want to do the typical hardbound project,” Tubosun says. “I opted for a multimedia project that I thought had more significance for the world than mere theory. Even at that time, I’d always been fascinated by names and their meanings, so it was natural that I gravitated towards this direction.”

Tubosun arranged the names in alphabetical order, and friends recorded audio. His project, a multimedia dictionary of Yoruba names available on CD, included about 1,000 Yoruba names. Users could click on names to learn their spellings, meanings and pronunciations.

From there, Tubosun decided to make Yoruba names accessible to a wider audience.

“I wanted to make the names available online as a living, thriving entity,” he says.

At first, he says, the project felt enormous.

“It looked like a really big job for one person,” he says. “Then I realized that, these days, you don’t have to do everything yourself.”

Tubosun opened social media pages for the project and claimed the domain name yorubaname.com. He raised $5,000 online. He started work on the website in mid-January, and helpers quickly came forward.

Eight volunteers from around the world work with Tubosun on the project; one is Brazilian and another is doing research in Benin. The team tone-marks names in the database, verifies the meanings of the names and work on the site’s user interface, Tubosun says.

The website is the first to provide a comprehensive list of Yoruba names as well as audio pronunciations and a method by which visitors can contribute information, Tubosun says.

Tioluwani Ibikunle, a tutor at the Yoruba Language Center at the University of Ibadan, says names are integral to Yoruba culture.

“Our names are important,” Ibikunle says in Yoruba, the only language allowed in the center. “Our names have stories. Some names are prayers. Yoruba names have powerful meanings that are connected to the Yoruba culture.”

For instance, a name that includes Ade or Oye indicates that one belongs to a royal family, lbikunle says. The name Enitan, meaning “a person of stories,” tells people to expect a story of the circumstances of its bearer’s birth.

Apart from university language departments, the Yoruba Language Center is the only place in Nigeria where Yoruba is taught, Ibikunle says. Established in 2010, the center has drawn more than 50 students from around the world.

Students adopt Yoruba names when they come to the center, Ibikunle says.

“They have come to learn the culture,” she says. “Bearing Yoruba names is a way to know the culture.”

Yoruba names are often misspelled and mispronounced, which affects their meanings, Ibikunle says.

“Because the meanings of the names are couched in the way they are written, once they are misspelled or mispronounced, the name loses its essence,” she says.

The name of Nigeria’s newly elected vice president, Yemi Osinbajo, has posed a bit of a challenge, Tubosun says. After Osinbajo began his campaign, various versions of hisname emerged on social media. The name was variously spelled Oshinbajo, Osibanjo or Oshinbanjo. It is typically spelled Osinbajo, but other correct variations, such as Osibajo, exist and have their own meanings.

Tubosun says Americans mispronounced his name when he taught Yoruba as a Fulbright scholar at an Illinois university.

Yorubais a tonal language. Without the tonal marks, Tubosun’s first name, Kola, could mean various things, including “kola” as in “kolanut,” “Get a tribal mark” and “He did not survive.” The audio function of Tubosun’s website enables visitors to hear the pronunciation of a name as they view its spelling, including the tonal marks.

Once the first entries are uploaded, the website will open to the public for crowdsourcing.

The project is fraught with challenges. English keyboards make it difficult to add tonal marks. And providing a human pronunciation of all the names is a major undertaking.

To solve that problem, Tubosun and his team had one person pronounce a finite set of tonal segments. Using those recorded bits, the computer can assemble the pronunciations of an infinite number of words. Called speech synthesis, the process concatenates, or links, sounds with words; speech synthesis is used in audio-based artificial intelligence.

It took the performer weeks to record about 1,330 segments of sound, covering all the oral and nasal vowels in Yoruba in all their tonal manifestations.

Tubosun estimates the site with the basic dictionary will launch in early July. A second phase, planned for later this year, will include a full Yoruba translation of the project.

“I see it as a go-to place for everyone on the Web who needs information about Yoruba names,” Tubosun says. “And for those interested in sustaining the Yoruba culture, I hope that it becomes a foremost place for all information relating to the language: a dedicated team of users spending their free time editing and refining the information therein, just like Wikipedia, so that it gets better and better every day.”