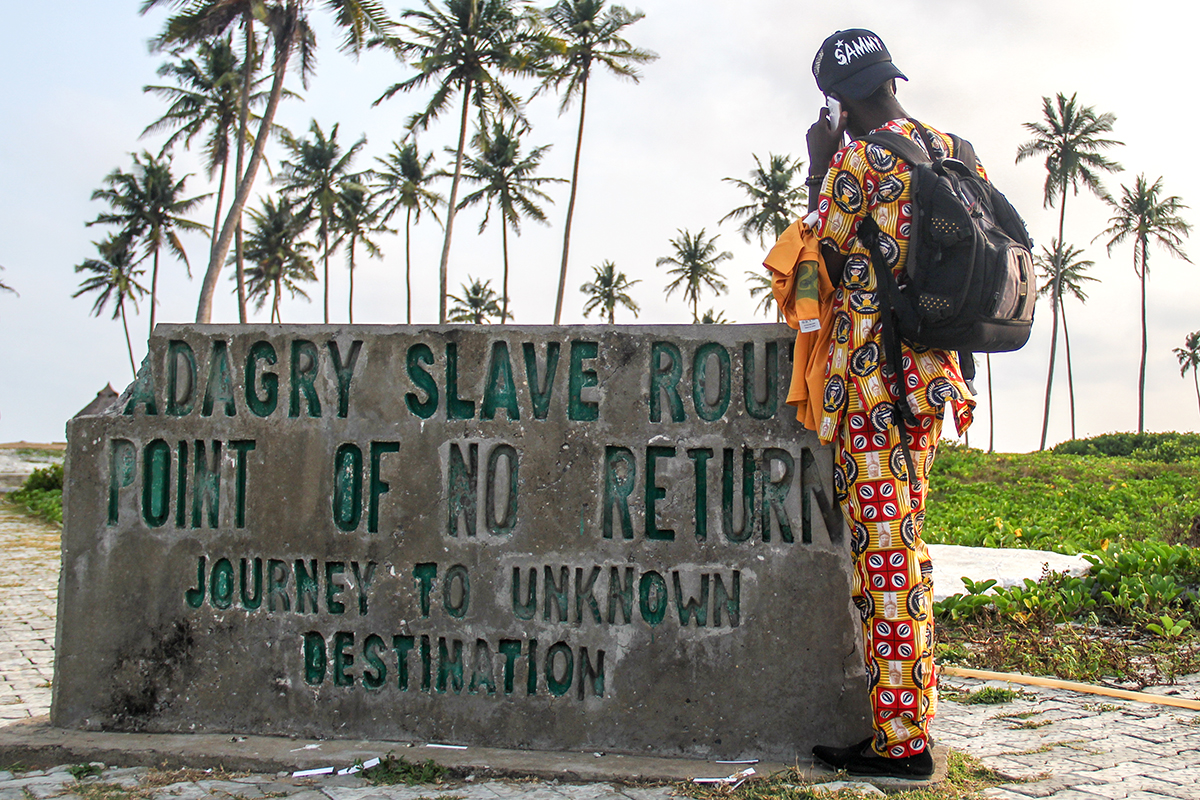 BADAGRY, NIGERIA — The sun peers between the tall palm trees and fluffy white clouds in this coastal town in southwestern Nigeria. A gentle breeze from the nearby Lagos Lagoon caresses the skin. It is 10 a.m., and a good time to start walking through the town before noon, when the breeze gives way to the sweltering rays of the sun.

Badagry, in Lagos state, offers a grand history of this area through museums and monuments, some dating as far back as 1845. The town served as a major outpost during the Transatlantic Slave Trade, when thousands of captives were sent to the Americas and Europe. Badagry’s historic sites also unveil a wealth of information on life in colonial Nigeria and the debut of Christianity in the nation.

Tourists visit Badagry to learn about the town that many Nigerians refer to as the “cradle of Western civilization” in Nigeria, says Oke-tojinu Setonji, a guide and founder of Jinuset Travels and Tours, which offers trips to sites in the town.

As you get ready for your day visiting Badagry, be sure to dress the part with an ensemble that will act as a shield from the sun’s rays and be light enough to let in the breeze from the lagoon. Comfortable shoes will prevent the town’s beach sands from constantly getting in. Begin your walk at the Statue of the Sato Drum. 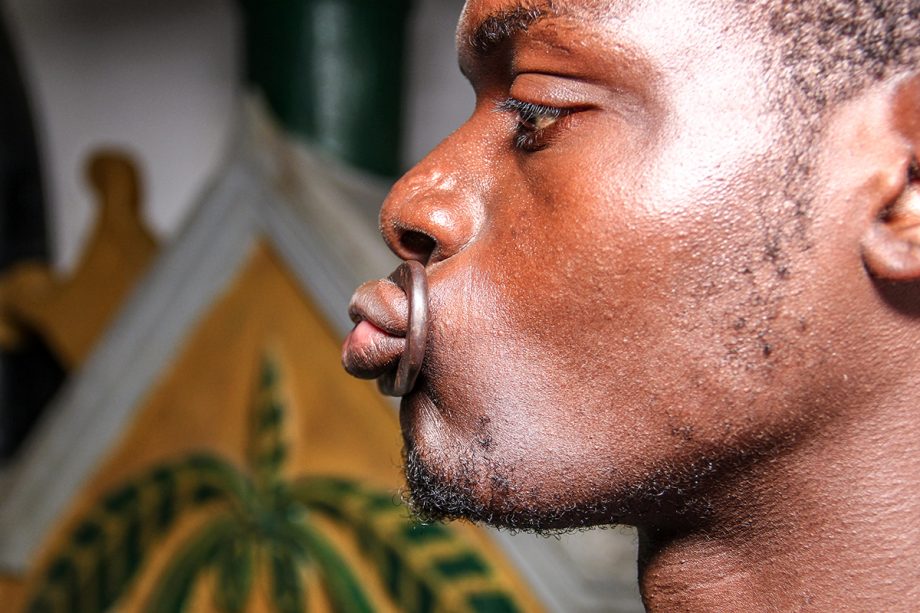 During the slave trade in Badagry, Nigeria, a mouth lock was used to clamp the lips together and was fastened with a padlock.

The Statue of the Sato Drum

The statue is found at the Roundabout Bus-stop. This 8-foot-tall brass artwork depicts a man playing the Sato drum, which is traditional to the Ogu people. Members of this group currently live in Badagry and in some parts of neighboring Ogun state and the Republic of Benin. The instrument’s history and use date back to precolonial times.

“Whenever something terrible, like a sickness, happened at that time, the drum would be beaten to ward it off,” says Akande Mautin, president of the Society of Badagry Artists. “It was also a ritual drum played by orphans during funeral ceremonies for important people.”

Today, the drum is played at important social events, including festivals and burial ceremonies for important figures. It continues to symbolize health and prosperity for the Ogu people.

Your next destination is the Vlekete Slave Market on Vlekete Road. There is no bus to take you directly there from the statue, so ride the bus heading to the Badagry Market, from where you can walk to Vlekete. You can also flag down an okada, a type of motorcycle taxi, and get some air in your hair as you ride to Vlekete Slave Market. 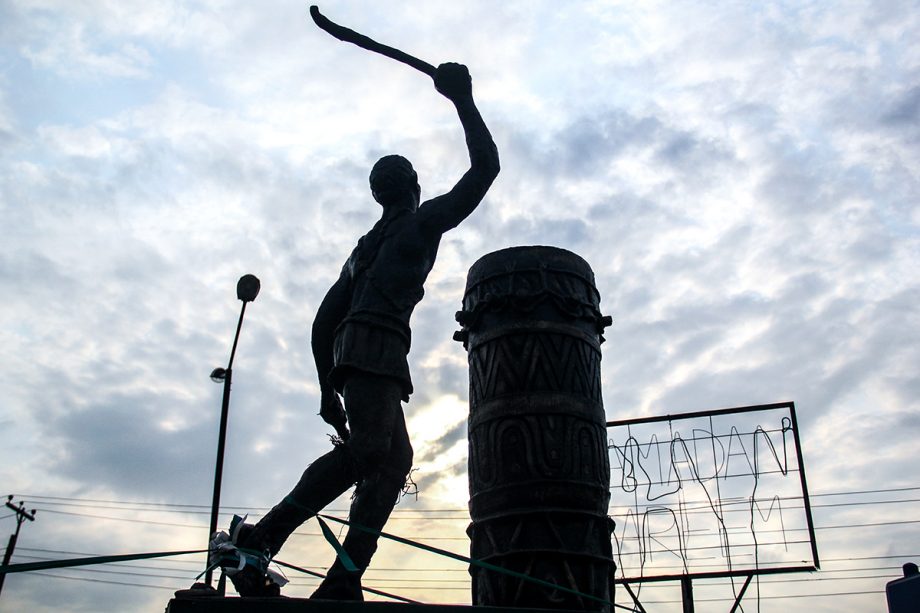 The Statue of the Sato Drum depicts an instrument peculiar to the town of Badagry.

You will see two buildings at this location. The smaller one was built in 1502 for slave traders, says Yussuf Babatunde, a research assistant in the department of history at Olabisi Onabanjo University in Ogun state. The building also doubled as a court, where offenders were tried.

The Vlekete Slavery Museum building is a new addition made by the government of Lagos state.

From the market, the slaves were sent to a barracoon, a holding cell where they were kept before being sent out on ships past “the Point of No Return.”

From Vlekete Road, you can journey on to the Agia Tree Monument, just a 10-minute walk south, toward the Lagos Lagoon. Turn left at Posukoh Road.

At this site in 1842, Christianity was first preached in Nigeria under the shade of a tree. The monument was built in 1992 to commemorate the 150th anniversary of that moment. The first Christmas in Nigeria was also celebrated here in 1842. At the monument, there are busts of Henry Townsend and Thomas Birch Freeman, Christian missionaries who are recognized as the first preachers in Badagry.

Kuton Joseph, the guide at the monument, points at a budding Agia Tree that was planted in June 2016. He says it is their hope to re-create the old Agia Tree, which existed for more than three centuries until it was uprooted by a storm in 1959. A towering obelisk now lies at the exact site where the tree stood.

From the Agia Tree Monument, take a short walk to the town center, at the Soglo Way roundabout, to find the Fisherman Statue. 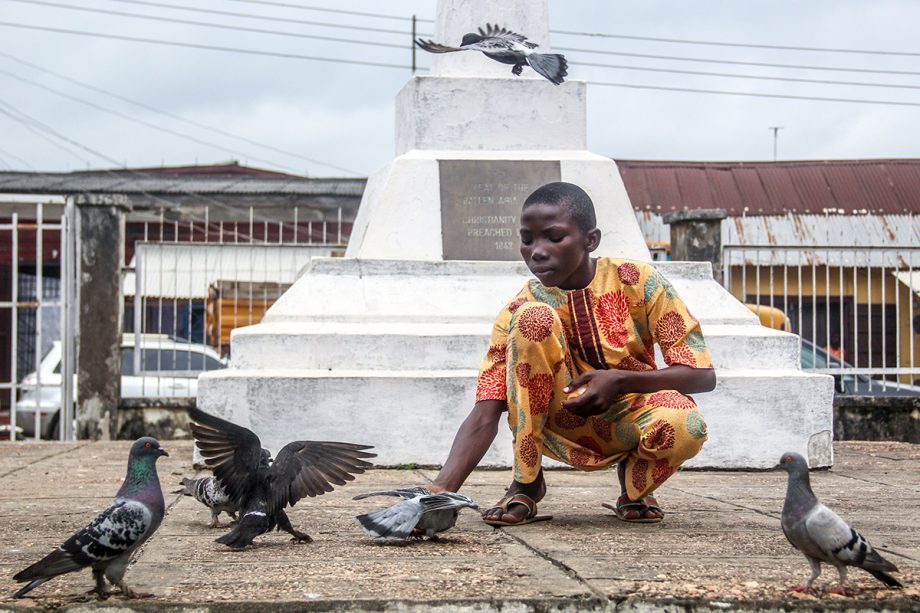 Kuton Joseph Jr., 15, the son of the caretaker of the Agia Tree Monument, feeds millet seeds to pigeons at the site, which is historically significant to Nigerian Christians.

Made from fiberglass, the 12-foot statue of a man with a fishing net in his hand is a recent addition to the monuments in the town. It was installed in May as part of the celebrations of Lagos’s 50th anniversary as a state. Fishing is a common occupation among Badagry’s indigenous people, Oke-tojinu says.

From the statue, take a six-minute walk to the Mobee Royal Family Slave Museum on Marina Road. Make sure you look to your right to enjoy views of the Lagos Lagoon.

One of three slave museums on Marina Road, the Mobee Royal Family Original Slave Relics Museum is filled with manacles that slave traders used to restrict the enslaved.

“The mouth lock is to clip the lips together; then the iron brand is used to put a hole through their lips; then it is locked with a padlock,” says Tunji Ahmed, a cocurator, who places a clip on his mouth to show visitors what this would look like.

From the Mobee museum, head east along Marina Road, and the First Storey Building is just two minutes away.

It is one of the first multistory buildings in Nigeria and was built with burnt bricks and corrugated roofing sheets brought from Europe by the Christian Missionary Society in 1845. In it, the first English and Yoruba Bibles printed for Nigeria – 174 and 172 years old, respectively – are kept.

Beside the First Storey Building is the first colonial administrative building in Nigeria, just a bit farther down on Marina Road. 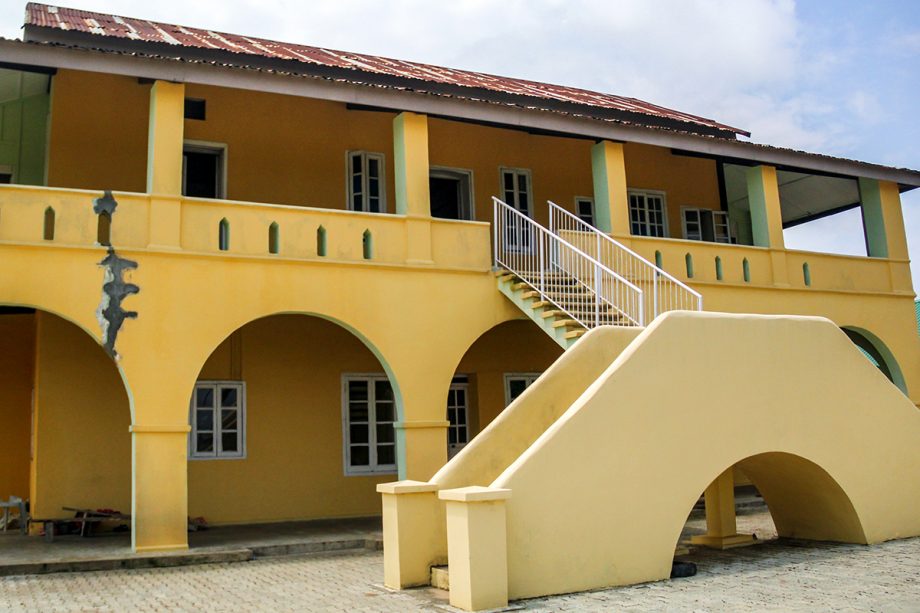 The name “Nigeria” was reputedly coined in this building in Badagry.

Oke-tojinu says that Nigerians credit Flora Shaw, the wife of Lord Frederick John Lugard, the first governor general of Nigeria, with naming the country, taking inspiration from the Niger River. In 1914, Lugard merged the northern and southern British protectorates to form the present-day boundaries of Nigeria. The empty building, now under the administration of the Lagos state government, was recently renovated and carries the smell of new paint. See this building for its colonial architecture and to learn of its impact on the country’s history.

End your tour with a long walk at the Point of No Return. At the Marina, there are several places from which you can take a boat there. 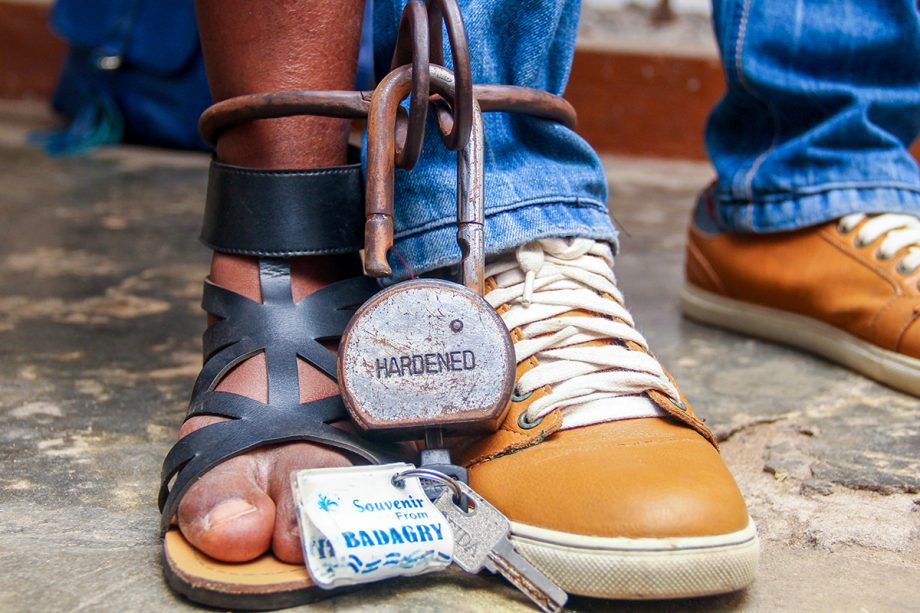 In Badagry, Nigeria, tourists can explore the complex history of the slave trade. For example, a visitor may wear a replica of an ankle lock used to fasten slaves to one another.

Point of No Return

The only way to get to the Point of No Return is by water. You can charter a boat; it will take five minutes and cost between $1 and $3, depending on the number of passengers. When you arrive, you’ll see a long stretch of white sand, dotted with hazelnut trees, grasses and sparse housing. You can walk the entire stretch in about 30 minutes, or ride a horse, which costs 500 naira (about $1).

The Point of No Return was the slave trade’s last stop on the African continent. Slaves walked along the beach, hands and feet chained, to the Atlantic Ocean, where they were put aboard ships and sent off to the Americas and elsewhere. Halfway down the road, you will see a sign with this ominous name.

About halfway into the walk, there is the Slave’s Spirit Attenuation Well. There, tired slaves could get a drink of water, which, according to Oke-tojinu, traditional chiefs believed it would cause memory loss among slaves so they will not recall their first days on the ships.

Standing at the end of the long walk is also the slave tunnel, a large, spiral-looking structure, still under construction by the government of Lagos state.

“It is aimed at giving visitors an experience of the convoluted journey that slaves were forced to make,” says Oke-tojinu.

Beside the slave tunnel is the Atlantic Ocean, its waves crashing and glistening in the honeycomb-yellow sun.

As you return the way you came, you can buy souvenirs like handmade bags, key holders and cups made from coconut at a small crafts shop run by local artists. 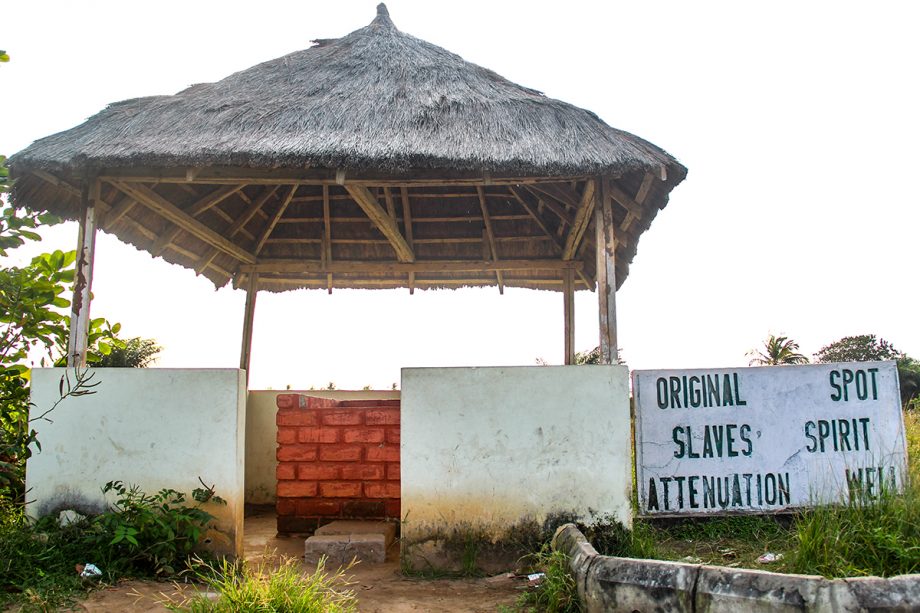 Traditional chiefs put some herbs in this well that were believed to make the slaves lose their memory of the early days on the ships.

The only way to reach Badagry from the Murtala Muhammed International Airport is by taxi or car. The 67-kilometer (42-mile) trip may be longer because the roads are riddled with potholes.

Contact Jinuset Travels and Tours for information on specific hours and entry fees via Facebook, Phone: +234805 373 9895, or email.