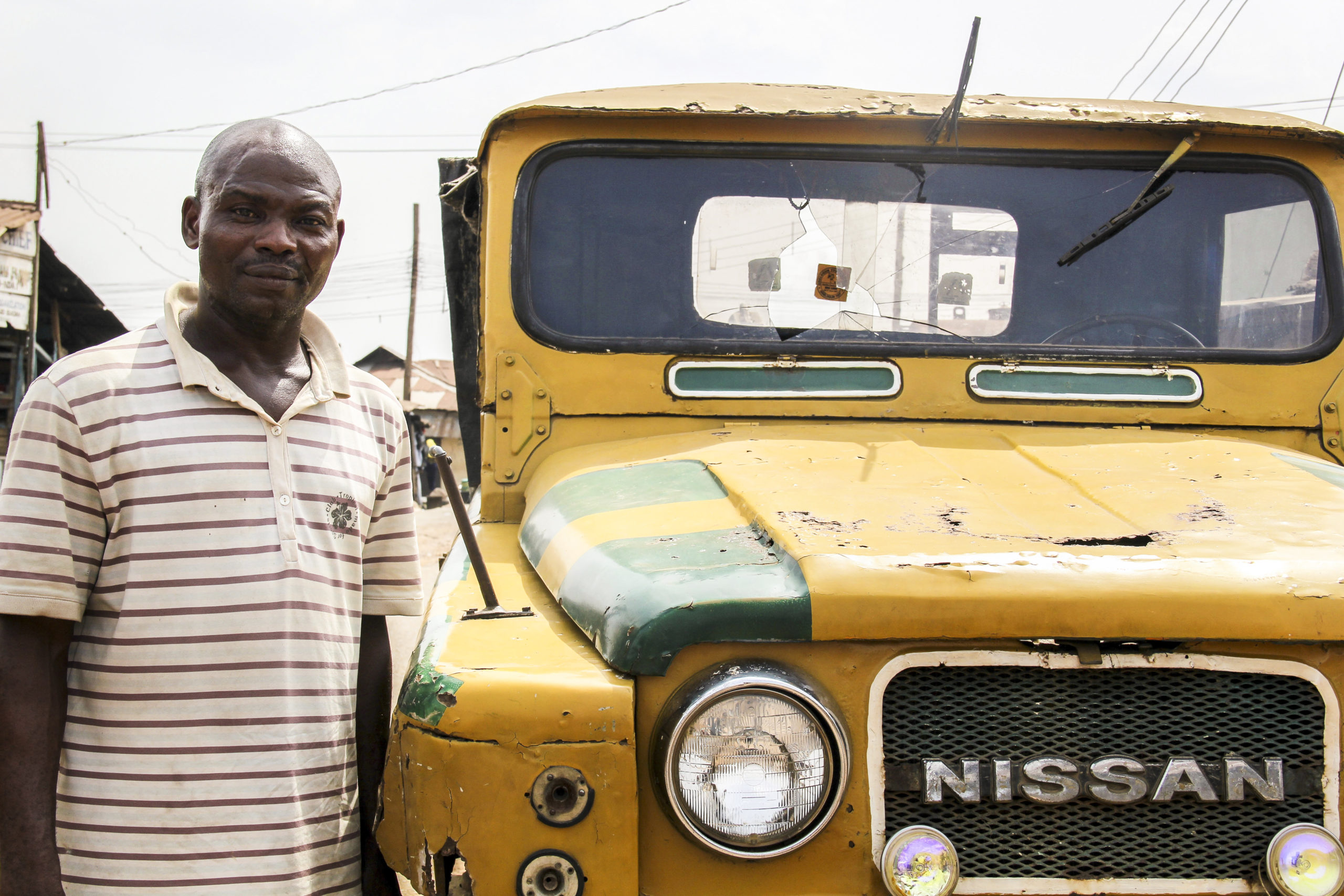 IBADAN, NIGERIA – March 1, 2015, started like any other Sunday for Sulaiman Elejigbo, the leader of Accord party in Ward 8, the ward with the greatest number of polling stations in Ibadan South East Local Government in Nigeria’s Oyo State.

Elejigbo woke up at 5:30 a.m., at the first cry of the muezzin, or crier, performed ablution and spread out his mat to pray for the success of the rally his party was holding that day.

The Accord party is running a candidate for the Oyo governor’s seat in the April 11 state elections. Party members are also seeking positions in the state assembly and the National Assembly.

The rally started at 11 a.m. with a few people at Ode Ige Street in Odinjo, a neighborhood in Ibadan, Elejigbo says. By afternoon, he estimates the gathering had grown to about 2,000. Some were standing in the street; others were sitting on the balconies of their homes. Police officers were present.

“At around 4 p.m., about three or four boys came and started shouting, ‘What is Accord party?’” he says.

The young men, most of whom were in their 20s, asked the question in a goading, dismissive manner, then went around slapping people with their bare hands.

The assailants then left and came back a few minutes later as part of a group of about 15, Elejigbo says. Some of the young men were armed with guns.

“They started shooting, and people started running everywhere,” Elejigbo says, his voice shaking. “Before we knew what was happening, two boys were dead. Many were seriously injured.”

The police confirmed the incident and said they had arrested eight suspects.

The shooting left the Odinjo community in fear, Elejigbo says.

As Nigeria gears up for a general election on March 28, many regions of the country are experiencing politically motivated violence. In two months, 58 people have died in the violence, according to the Nigerian National Human Rights Commission.

Experts say this kind of violence is not new in Nigeria and is inevitable in a young democracy divided along ancestral, religious and ideological lines. Religious leaders, politicians, nonprofit organizations and others call for peace – and some urge the government to deploy the army to ensure peaceful elections.

The general elections will be the eighth since 1959, the year preceding the country’s independence from the British.

Hate speech, destruction of campaign billboards and posters, and violent clashes between supporters of rival parties have characterized the campaign season.

Over a 50-day period beginning December 2014, the National Human Rights Commission documented more than 60 separate incidents of election-related violence in 22 states, according to the Feb. 13 report. The commission has also received complaints of hate speech.

Half of all Nigerians are worried about political violence in this election, according to an opinion poll conducted in December by Afrobarometer, an independent research network that conducts surveys on democracy in more than30 African countries.

CLEEN Foundation, a nonprofit organization that champions public safety, has classified 21 of Nigeria’s 36 states as violence-prone because of their political tensions and histories of electoral violence.

Violence occurs during every election in Nigeria and at all stages, from pre-election to Election Day to post-election, says Bamiji Oyebode, a lecturer in peace studies and conflict resolution at the National Open University of Nigeria.

In the last election, in 2011, more than 900 people died in bombings, mob violence and other incidents, according to a 2011 National Democracy Institute report.

The March 1 attack in Ibadan left a trail of destruction.

The young men, whom police call “thugs,” shattered the windshield of Taoheed Giwa’s towtruck. Giwa had left the truck near the scene of the shooting as he took the injured person to the hospital, he says, pointing to a spot of dried blood on the pavement where he picked up the young man.

Because he needed to have his windshield replaced, Giwa was not able to work for several days after the incident.

A woman who was selling yam and cassava flour near the rally site says the gang attacked her and destroyed her display table. Fearing the gang might attack her again, she requested anonymity.

“I was trying to pack my things when one came and slapped me,” she says. “That was before they started shooting.”

She now keeps her damaged display table up with stones and pieces of wood.

“I do not have money to call any carpenter to repair it yet, so I manage it like that,” she says.

Political parties have exchanged accusations over the March 1 incident.

Elejigbo says the ruling party in Oyo state, the All Progressives Congress, or APC, sent the men to disrupt his party’s rally. However, Olawale Sadare, the APC’s director of publicity and strategy, says his party was not involved in the incident.

“The Accord is being mischievous,” Sadare says. “At the APC, we do not harbor thugs. We detest political violence.”

In a press briefing after the attack, Oyo State Police Commissioner Muhammad Musa Katsina accused the Accord party of holding a campaign rally without notifying police. But Elejigbo insists that the party informed the police about the meeting and that officers attended.

All political parties deny knowledge of the suspects arrested in the March 1 incident.

Elejigbo says the attack at the rally was the first politically motivated violence in the neighborhood.

However, he previously experienced other forms of aggression there.

Some time ago, some young men threw a big stone on his roof. The stone made a hole in the roof, but no one was injured, he says. He cannot prove that attack was politically motivated.

Members of other political parties have also experienced violence.

The campaign office of Alao Akala, the Labour Party’s gubernatorial candidate for Oyo state, was ransacked in February, says Akala’s director of public affairs, Oludare Ogunlana. Cars and other property were destroyed.

No arrests have been made in connection with the crime.

He accuses the ruling party, the APC, of being behind the violence.

But Sadare says his party’s billboards have also been destroyed. The APC is not interested in violence, he says.

“We don’t even have the resources to sponsor violence,” he says.

Some areas have remained peaceful during the campaign season.

Femi Kuti, who lives around Ring Road in Ibadan, says there has been no electoral violence of any kind in the area.

He has not even seen a torn campaign billboard, he says.

Oyebode, the university lecturer, says electoral violence is unavoidable in the young democracy.

“For a country with many differences – ethnic, religious and ideological – violence is inevitable,” he says. “This is just a phase that will pass. Other countries in the world pass through this phase too, especially at the teething stages of democracy.”

Kenya and Ivory Coast have had bloody elections too, he says.

A dispute over the results of Kenya’s 2007presidential elections culminated in more than 1,000 deaths and the displacement of more than 500,000 people. In March 2011, Ivory Coast erupted into civil war when President Laurent Gbagbo refused to step down after losing an election; at least 1,000 people were killed, according to the United Nations.

It will take time for African democracies to mature, Oyebode says.

“Democracy is new to our continent, and for this to change, it will take many years,” he says. “The actors are still the same. We need to inject new blood into the system. Then maybe things can begin to change.”

However, some observers say the violence has more to do with stiff election competition than the youth of Nigeria’s democracy.

“It is a close call,” says ‘Sola Fagorusi, program manager of OneLife Initiative for Human Development, a nonprofit that promotes peace that helps coordinate the #VoteNotFight social media and grassroots campaign. “It is the first time that the ruling party is not sure of winning an election.”

Oyebode says violence erupts when politicians go into an election determined to win at any cost.

The violence is also connected to the high rate of unemployment among young people, he says. Unemployed youths have become willing tools in the hands of the moneyed political class.

Politicians pay young people to campaign for them – and, sometimes, to instigate violence, Oyebode says.

Unemployment in Nigeria doubled from 12 percent in 2006 to 24 percent in 2011, according to the World Bank’s 2013 Nigeria Economic Report.

Young people between the ages of 15 and 35 account for nearly 40 percent of the country’s population, according to the 2012 National Baseline Youth Survey.

Having lost faith in the police, some people have proposed that the government deploy the army to protect voters.

“These elections may be difficult without army protection,” Elejigbo says. “Some police officers are incompetent.”

But Adekunle Ajisebutu, the police public relations officer for Oyo State Command, says the police are equipped to do their job.

The Inter-Agencies Consultative Committee on Election Security, or ICCES, will determine what kind of security personnel to dispatch to each state during the elections, he says.

However, the police will have a tough time convincing Nigerians that they will act independently during the election, Oyebode says.

“Many people perceive the police as being a regime police and not the Nigerian police,” he says.

“Our security agents meet regularly to fashion out the modus operandi for preventing violence, before, during and after the elections,” he says.

Ajisebutu declined to reveal the strategies the police will use to ensure security.

Sadare, the publicity and strategy director of APC party, urges the electoral commission to conduct elections whose results Nigerians will trust.

“The elections should not only be free and fair but credible,” he says. “Then, those people who go out there to cause mayhem will not have any reason to do so.”