Skip to main content
The story you are reading was published on Monday January 9, 2017. To read more recent stories click here. 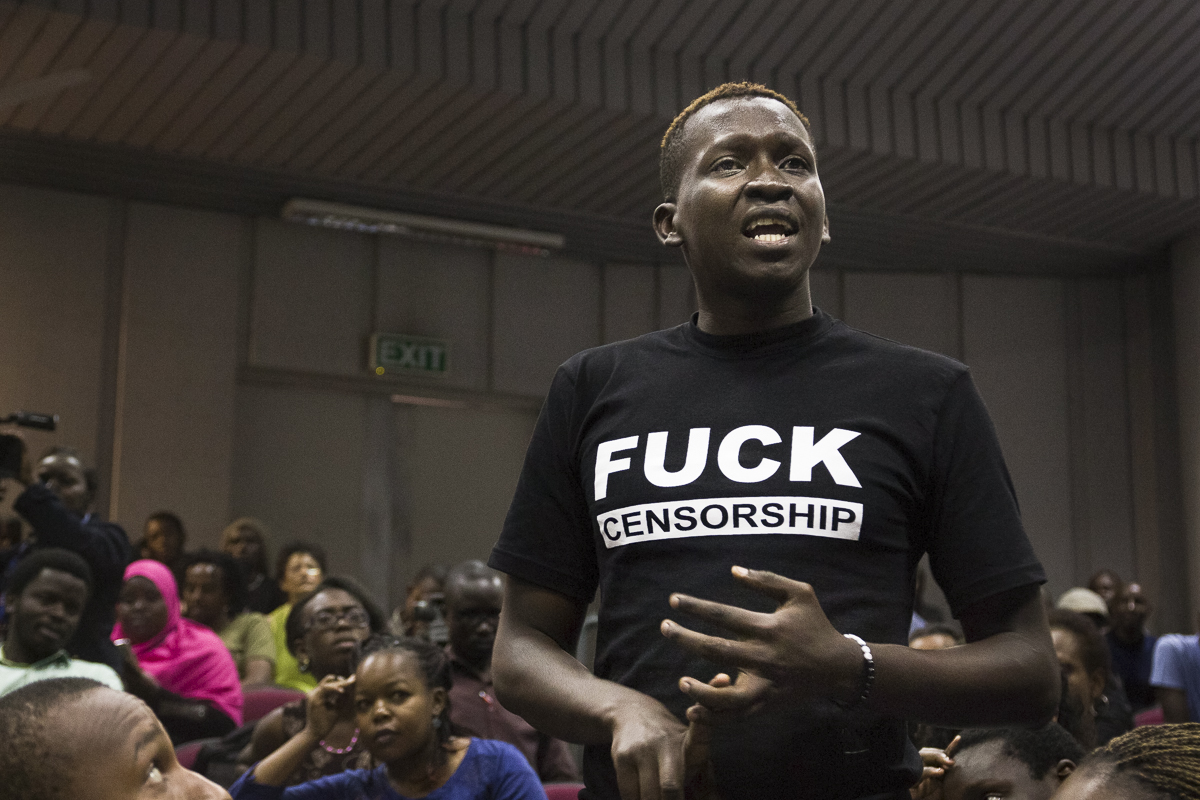 NAIROBI, KENYA—Proposed changes to archaic regulatory law here have filmmakers, bloggers, actors and many others in the media industry worried that their free speech will be curtailed.

Officials at the Kenya Film Classification Board (KFCB), the government agency that regulates the creation, broadcasting and distribution of films, say the proposals, if made into law, will address modern media concerns, including specifics on how to regulate social media, while replacing outdated mandates.

But opponents of the proposal say it would take the country back to the 1990s, when the media and arts were heavily censored by the government, because the plan would increase the board’s power and expand its scope.

Under the proposal, the board would have the power to regulate film and stage productions as well as publications, including online content. Internet service providers would be required to ensure that anyone who uses their platforms to publish content is registered with the board, and would be required to prevent use of their services for hosting or distributing pornography, radicalization materials, hate speech and “glamorization of use of drugs and alcohol,” among other content. Internet service providers who fail to comply with these provisions face a fine of 2 million shillings ($19,655) upon conviction, or a prison term of up to two years, or both.

In addition, compliance officers would be able to seize film that they feel violates the law.

However, some fees, including those paid to the board for reviewing films, would be removed.

The board maintains that its aim is to protect consumers from harmful content.

Ezekiel Mutua, CEO of the Kenya Film Classification Board, says the proposed changes will bring relief from strict oversight required by the existing law.

People in the creative industry agree that the existing law is outdated, and some go so far as to say that it is repressive. Raucous public debates have marked the discussion process. 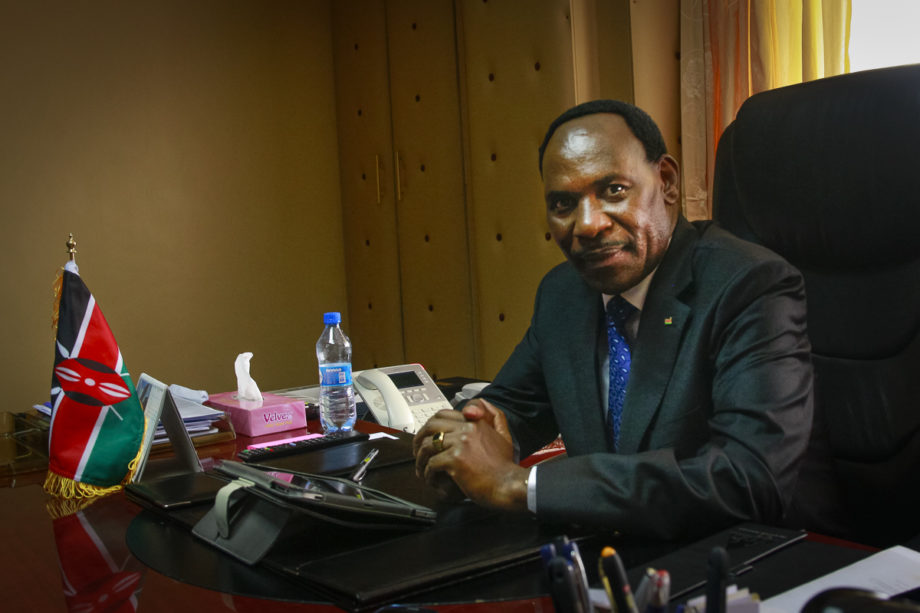 Ezekiel Mutua, CEO of the Kenya Film Classification Board, at his offices in Uchumi House in Nairobi, Kenya’s capital. The board has mounted a campaign to broaden its regulatory powers over the media and creative industries.

In an agreement signed in late November by the board and the Creative Economy Working Group Committee, both sides noted a need for a law that both aligns with the constitution and responds to the needs of the film sector. They also agreed to end “public acrimony” in debates and noted that a new law should be in place by July 2017.

Kenya’s film industry is regulated under a 1963 law known as the Film and Stage Play Act Chapter 222.

According to the law, a film cannot be made in Kenya without a license from the board. Film producers are required to submit a full description of the scenes and the full text of the spoken parts of the entire film for approval, as well as to pay fees, before a license is granted. Changes to the film are subject to further review. Police can intervene, by force if necessary, to stop the making of a film if in an officer’s opinion it “endangers the safety of any person or property,” among other reasons.

The law also gives the film board powers to censor films viewed as immoral or against national values. Movies that have been banned include “The Wolf of Wall Street,” “Fifty Shades of Grey,” and “Stories of Our Lives,” a local documentary on the LGBT community in Kenya.

“The inclination and the spirit of that law was actually to censor,” Mutua says. “It was to manage information for the government.”

The inclination and the spirit of that law was actually to censor. It was to manage information for the government.Kenya Film Classification Board CEO Ezekiel Mutua, referring to the existing law

But people in the media industry say the new proposal would also curtail the freedom of expression guaranteed by Kenya’s Constitution.

Demas Kiprono, a legal senior programs officer at Article 19 East Africa, a free speech advocacy organization, says the proposal would make Kenya a police state, because it would give the board the power to confiscate material without a warrant.

“Kenya should instead embrace and promote the filmmaking industry in a manner similar to what has taken place in Nigeria, where filmmakers work freely and unencumbered,” Kiprono says. “The result has been a bustling industry that employs millions of Nigerians in one way or another and supplies Africa, including Kenya, with African-oriented films.”

Organizations in the arts industry have rejected the board’s proposed law and have approached the Ministry of Sports, Culture and the Arts about an alternative bill.

Kimani Njogu, chairman of the Kenya Creative Economy Working Group,whichcomprises14 organizations from the arts industry, says the group is pushing for laws that focus on facilitation rather than regulation. The legislation that his organization hopes to get approved would be a “creative economy bill,” he says.

“Once you have a creative economy bill which will address visual arts, you can address films, performing arts, you can address issues to do with creativity and the imagination,” he says. “Then you will have rules, instead of legislations. And the role of government would be more of licensing and the provision of an environment needed for the industry to thrive.”

Others in the media industry are pushing for a full overhaul of not just the law but the government’s entire media regulative authority.

Haroun Risa, an actor and writer, has initiated an online petition to repeal the Film and Stage Play Act and disband KFCB. Risa wants the board replaced with a body that takes seriously the right to freedom of expression.

“Even without the film bill, there are still going to be a lot of hurdles that a lot of us artists are going to go through,” Risa says. “This bill is one of their attempts to curtail creativity.”

Kenya should instead embrace and promote the filmmaking industry in a manner similar to what has taken place in Nigeria, where filmmakers work freely and unencumbered. The result has been a bustling industry that employs millions of Nigerians in one way or another and supplies Africa, including Kenya, with African-oriented films.Demas Kiprono, a legal senior programs officer at Article 19 East Africa, a free speech advocacy organization

Mutua stresses that what KFCB has put forward is just a set of proposals and not a bill. The intention of the proposals is to initiate a conversation on the review of the film act, he says.

“The industry has been asking for the review, [but] now they no longer want to engage with any other view other than theirs,” Mutua says. “We are in a society where we must balance between your rights and the rights of others.”

Mutua’s proposals have received support from some quarters. Musau Ndunda, the secretary general of the Kenya National Association of Parents, says KFCB is taking the right steps, and that the government needs to do more to protect children from harmful content in both traditional and new media.

“The issue of content is a very serious crisis for our country,” Ndunda says. “To protect children, we must go further than regulating what is on our airwaves. We must also regulate social media and even smartphone applications.”

Njogu, the chairman of the Kenya Creative Economy Working Group, says that if his organization’s push for an alternative bill does not succeed, it is prepared to go to court to seek interpretation on the constitutional provisions on freedom of expression.

“The sector is not against rules, as long as those rules do not undermine the industry,” Njogu says. “Let us start afresh through deeper consultations.”