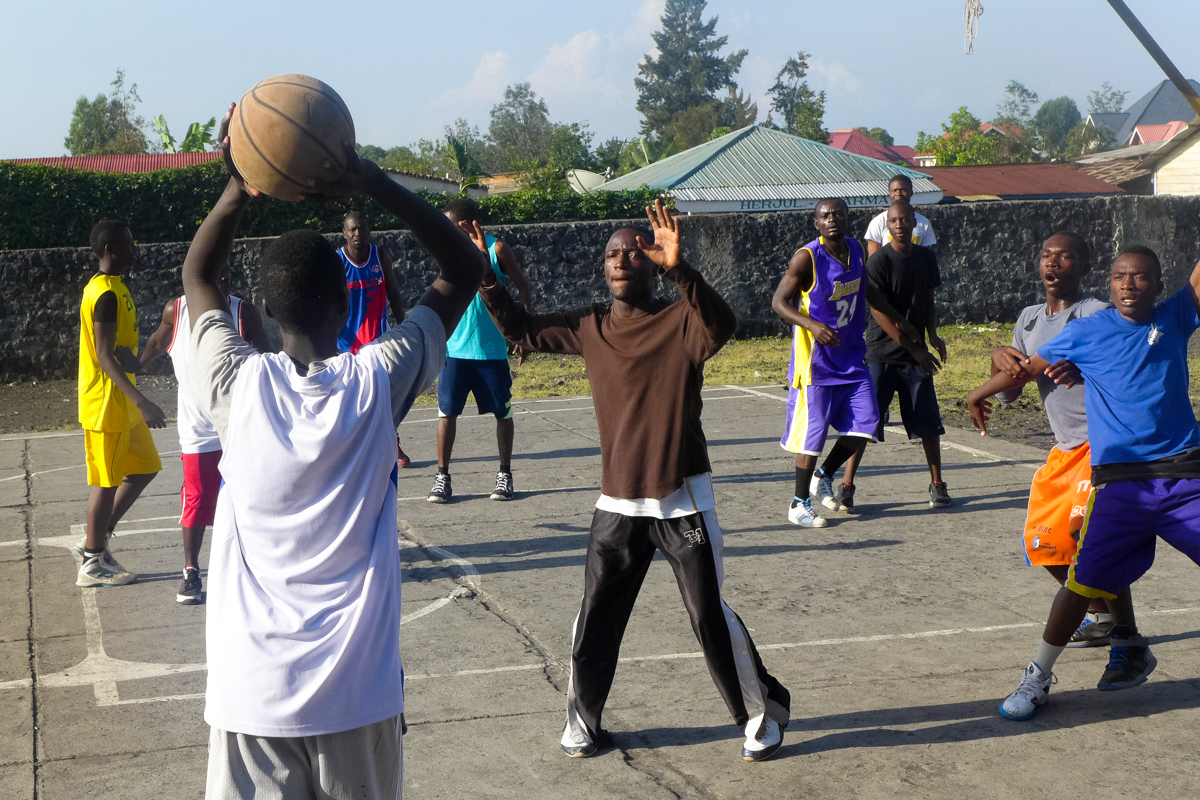 GOMA, DEMOCRATIC REPUBLIC OF CONGO – It is 7 a.m. and more than 20 young men have already been on the basketball court in the Carmel neighborhood of Goma for an hour.

The basketball court is at the heart of the community, one of 18 neighborhoods in Goma. The court is just south of Sake Road near Mount Carmel Church and the primary school of the same name.

“I am passionate about the game,” Mabingo says.

Beyond simply enjoying the sport, Mabingo has seen it heal tribal divides in Goma, a city in eastern DRC that was thrown into turmoil when hundreds of thousands of Hutus fled there to escape retribution after the Rwandan genocide.

The Lega tribe, which dominated the Carmel neighborhood in years past, resisted the infusion of Hutus, who were widely perceived as killers because of their tribe’s slaughter of Tutsis in Rwanda during the 1994 Rwandan genocide. Even today, the tribes have little interaction, and intertribal marriage is extremely rare.

Basketball is easing the hostilities.

“On our Mount Carmel team we have players from more than 10 combined tribes,” he says proudly. “Now, the tribes’ conflict of the past is not visible in the teams because basketball has managed to unite us together.”

During this early morning practice session, Mabingo leads his team in drills. His face is soaked in sweat as he runs the length of the court with his teammates. The team will practice for as long as five hours today.

Using basketball to cultivate character and harmony is relatively new here, but the Carmel neighborhood team formed in 1996, just two years after the tribal genocide that ultimately forced more than 2 million Rwandan refugees into DRC and other neighboring countries.

Over the years, Mabingo has seen basketball transform lives and help young people achieve their potential.

Basketball has long been an outlet for young people in Goma. In recent years, organizations that use the sport as a tool of peacebuilding and social engagement have popped up.

NGOs and the private sector are fast recognizing basketball’s ability to engage young people in the healing of divisions that have long plagued the region. DRC, where people of disparate tribes are struggling to co-occupy neighborhoods, is becoming a hot spot for basketball in Africa.

In gaining prominence, the game is fast becoming a tool for change here. Five Congolese athletes have played in the NBA, and dozens of organizations promote youth basketball throughout the region. The increasing popularity of the game is even providing options for young people who might otherwise join local militias.

There are at least 13 registered basketball teams – nine men’s teams and four women’s teams – in Goma, sponsored by NGOs or privately. These teams play up to 50 games a season in the hope of competing in the championship playoffs.

In addition to the registered teams, several NGOs offer less formal engagement and junior teams that teach skills to young people. In total, more than 500 youths regularly play basketball in Goma, a city of about 2 million people.

There are more than 450 tribes in the Democratic Republic of the Congo, or DRC. For nearly 20 years, the North Kivu province has endured repeated wars among various armed groups. Tribal warring over land and resources has caused 5.4 million casualties since 1998, according to an International Rescue Committee report.

Cosmas Koko, a coach and player in the local league, says he too has seen basketball become a tool to promote civility.

“On my team there is no discrimination,” he says. “At the end of each game, players embrace. They learn to lose like winners and show respect to the other team.”

Kalume Alimasi, who started playing with the Mount Carmel team in 1998, says basketball helped him build relationships and taught him to value fair play.

“I learned the spirit of sportsmanship, where fair play dominates,” he says. “Sport prepares young people for a better future.”

“During preparations for local tournaments, we spend the night together, as a way to focus and have an idea of the match,” Mabingo says. “In case of dispute between players, it’s also an opportunity to hear and forget the problems to play with a team.”

Basketball has also helped some young people here to stay in school.

Manu Kafaranga has been on the Mount Carmel team since 2011. Both of his parents are unemployed, and he helps support his three siblings. When his family was unable to pay his school fees, his team banded together to help.

“My team paid my school fees for an entire year,” he says.

But not every neighborhood has basketball courts.

Baraka Musavuli, 23, thinks it’s unjust that his neighborhood doesn’t have a court. When he travels to other neighborhoods to play, he isn’t welcome, he says.

“I live far away from a [court],” he says. “To play basketball, I have to travel several kilometers. When I do come, there are those who say I am not from their neighborhood, so I do not have the right to play. Or they accept me without really trusting me.”

If he is accepted onto a court, coaches often deny him the right to play, Musavuli says.

“During the match, the coach lines up players from his neighborhood and denies me the right to play,” he says furiously. “I think it’s a kind of discrimination.”

Koko, the player-coach, says choosing players has nothing to do with neighborhood or tribe. He says he simply chooses players with the strengths and skills to win.

Other players, however, say they do feel welcome when they travel across town to play on other courts.

Yves Maya, 24, comes to Carmel from Kasika, another Goma neighborhood, to play.

“We have no basketball court in our neighborhood, and I often come here to do training sessions with the youths from Carmel,” he says. “I feel at home here.”

“When playing together, they set aside political and ethnic problems and try hard to win,” he says. “Sport unites all the people in general, without any discrimination on the grounds of race or tribe.”

EUBAGO is working hard to improve the basketball infrastructure in Goma, including building new courts, Mwananteba says. Only four of Goma’s 18 neighborhoods have courts. In the Kibwe district of Goma, for example, teams play at schools or on dirt courts or fields where the baskets have no nets.

Traditionally, basketball has been played only in rural areas, but teams are popping up in nearby villages too, says Anaclet Mpongo, chief of the sports and recreation division of the North Kivu province.

According to a 2013 study by MONUSCO, the UN Organization Stabilization Mission in DRC, rebel groups continue to systematically recruit young people in the Goma area.

Conscriptions are especially common in North Kivu. In most cases, militias abduct children between the ages of 15 and 17 and force them to fight. Many others join after being promised money, education or jobs.

“The sport is a means of distraction for young people because it allows them to forget the presence of armed groups,” Mpongo says.

EUBAGO will continue working to increase resources for young people who want to play, he says.

“We need to provide more sports facilities for young people to continue to dissuade them from integrating into armed groups,” Mpongo says.