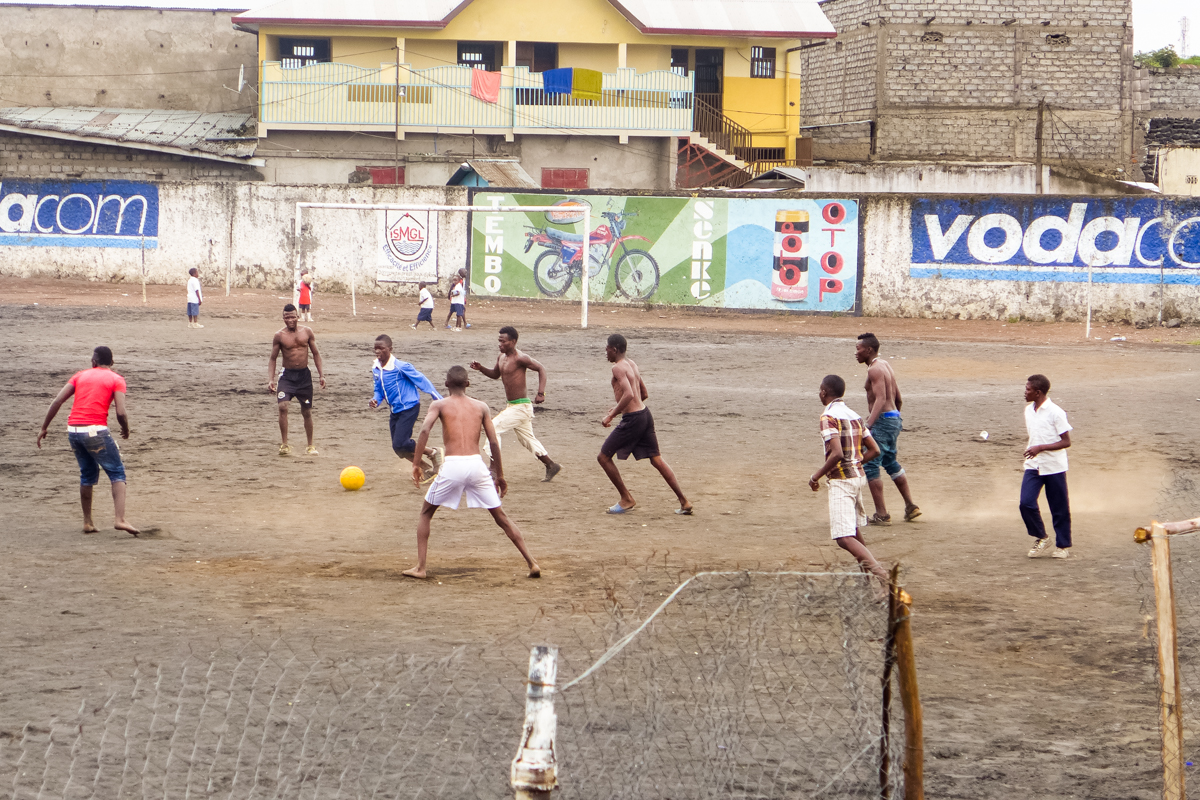 GOMA, DEMOCRATIC REPUBLIC OF CONGO – Hundreds of people crowd around a dusty rectangle. Even more fill the hillside overlooking the football field.

Spectators jostle for better views of the game in the Mabanga neighborhood of Goma, the capital of the North Kivu province of the Democratic Republic of Congo, or DRC.

There is no formal football field in Mabanga, in northeastern Goma. Local boys practice on unoccupied lots.

Nickson Kambere, 15, a student at l’Institut Virunga Quartier, a secondary school in Goma, has been playing football since he was 7. Along with 30 other young men, he plays for Puturu, the team that represents the Mabanga neighborhood in the Football League of North Kivu.

“I love my football game,” Nickson says. “It gives me lots of advantages.”

In addition to enabling him to develop his athletic skills, football has kept him from sliding into juvenile delinquency, as many teenage boys do here.

“Football has had the power to help me avoid making mistakes, such as theft,” says Nickson, who admits he has been penalized for petty crimes in the past.

North Kivu has been mired in armed conflict and criminal violence for decades. The region’s struggling economy leaves many young men jobless.

In that setting, football provides an alternative path, says Steven Paluku, 16, who has played since he was 8.

In his eight years of play, Paluku has developed as an athlete, made friends and avoided trouble, he says.

He and his teammates get along well.

Arsène Zawadi, 12, who also plays for the Puturu team, agrees.

“Football shields me from bad behavior,” Arsène says. “In our neighborhood and at home, hemp smoking and drinking alcohol are common.”

Arsène heads to the football plot every Monday, Wednesday and Saturday after school. By the time he gets home, he doesn’t have enough energy to even consider getting into trouble, he says.

“I come home so tired and so I just go to sleep,” Arsène says.

Oswald Osso, the coach of Puturu team, says his work enables him to contribute to the country’s cultural and moral development.

“Teens here find themselves locked into bad practices like hemp smoking and using weapons,” he says. “But once teens are on soccer fields, that can change. Running after the ball can clear the mind of negative thoughts.”

In a place where armed conflict, high unemployment and easy access to alcohol, marijuana and other drugs contribute to a high rate of juvenile delinquency, neighborhood football leagues keep young people occupied in a constructive manner.

Criminality among young people in DRC stems from poverty, unemployment and underemployment, and complex social factors.

According to the World Bank, 81 percent of people in DRC are underemployed.

Most people live in poverty in DRC, though the picture has improved in recent years. The poverty rate dropped from 71 percent in 2005 to 63 percent in 2012, according to the World Bank. In 2012, the per capita income was $220.

DRC ranks second to last on the 2013 Human Development Index, a measure of well-being that factors in life expectancy, education and income. DRC is 186 on the list of 187 countries, ahead of only Niger.

Dozens of armed groups operate in DRC, and these militias forcibly recruit young men. Drug use is common among child soldiers.

In fact, drug use is high throughout the country. Narcotics control is not a law enforcement priority in DRC, according to the 2011 International Narcotics Control Strategy Report. Police lack the training and resources to enforce drug laws, the report says.

But engagement in sports has been shown to steer young people away from crime in conflict and postconflict zones throughout the world.

“Engaging in lawful, socially useful activities and adopting humanistic orientation towards society and outlook on life, young persons can develop non-criminogenic attitudes,” according to the United Nations Guidelines for the Prevention of Juvenile Delinquency.

Neighborhood football is having a real impact in the community, says Anaclet Mpongo, chief of the sports and recreation division of North Kivu province.

“First, a teen who plays neighborhood-based football cannot be tempted to become a pickpocket,” he says. “Instead, he spends his time playing, so he will not be lured into smoking.”

Jeanne Kabuo encourages her son to keep playing football because it keeps him out of trouble.

“Sometimes I tell my son to go back to the stadium for more training for fear that he might steal my money,” she says.

“This is a game that shapes the social skills of the teens and develops character,” she says.

Football deserves more designated resources, Mpongo and others say. The government has not fulfilled its commitment to build football fields in Goma.

“Unfortunately, the government breaks its promise regarding neighborhood-based football,” Mpongo says. “Out of 19 neighborhoods, only four have football fields.”

Every neighborhood should have a field, he says.

Neighborhood teams, which are privately sponsored, are having an impact.

“Football means health,” Mpongo says. “It is their right to move their body.”

Some young people are even finding career opportunities through football.

“These teams are feeders of affiliated teams in different entities,” Mpongo says.

Bernard Saidi, who has been playing football since he was 5, now coaches a team in the Katindo neighborhood.

“I have a lot of experience,” says Saidi, 62. “Sports helps these boys do better things in life rather than taking up arms and engaging in rape and stealing from their moms.”

Still, some parents say they’d rather their children focus on school.

Franck Maroyi, a driver, says he doesn’t encourage his sons to play football.

“I can never encourage my young boys to play football because it is a mere distraction,” he says. “If my sons played football, they would fail in school.”

Local boys are inspired by popular national football teams like Kabasa and Virunga.

“We want to follow in their footsteps,” Paluku says. “We hope one day we will be recruited by the big teams.”

In a city with few recreational opportunities, football is a major community asset, says Osso, the Puturu coach.

“Neighborhood-based football is a good activity, and it needs to be promoted,” he says. “Unlike in Europe, where there are amusement parks, zoos and merry-go-rounds, young people in Mabanga neighborhood have no other options and no occupations.”