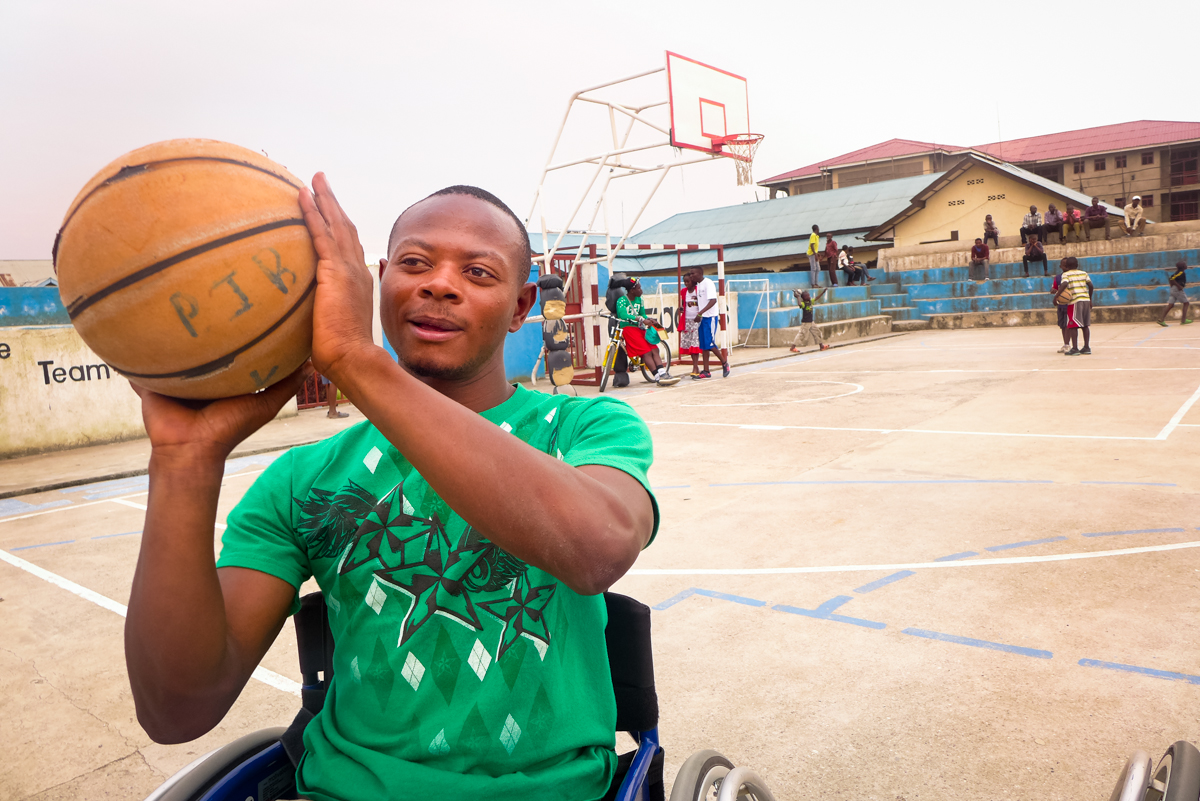 But she’s not an average athlete.

Kalyoko has a spinal condition that prevents her from walking. When she was 6, she underwent several surgeries to remove a mysterious abscess on her spinal cord. Her spine curves upward now. She doesn’t know the name of her condition or its root cause.

Her teammate, Dany Badacoka, 17, is also here to play today.

He enters the court with a big smile. Because of a spinal abnormality, he walks on his hands and feet. After years of walking the lava rock-strewn streets of Goma, his hands are as calloused as the soles of his feet.

Riding wheelchairs, Kalyoko, Badacoka and their other teammates are ready to begin the afternoon training session with their coach. At least 50 people are in the stands to cheer on these nontraditional athletes.

Goma is a difficult place to be disabled, Kalyoko says. Members of her community stigmatize her because of her deformity.

“I never thought that I was like other people because there were always people around who reminded me of my disability at every opportunity,” she says.

Kalyoko has been teased and harassed since she was little.

“Some people here think we do not have sensitive hearts,” she says. “One day, I remember, I came across two young boys. When they saw my infirmity, they laughed at me, saying that no boy would marry me, even if I were the sole girl remaining in the world.”

During her childhood, she says she played alone.

“I will never forget my childhood because it was painful for me,” she says. “Whenever I saw the other girls playing jump rope, I fell into tears because I could not join them and have a good time too.”

But Kalyoko feels different on the basketball court.

“When I am playing here, I feel alive,” she says. “I forget all my worries and I focus on the ball.”

Limited access to health care and ongoing conflict have left many young people in DRC with disabilities.

Despite strong cultural stigma and a lack of care options, dozens of young people with disabilities in the North Kivu province of DRC are turning to sports – including basketball; sitball, a version of volleyball played while sitting; and pingpong – to improve their quality of life. Building strength and community helps them overcome countless obstacles in their everyday lives, advocates say.

Thérèse Mabulayi, who walks with the aid of a prosthesis, founded Goma’s Handisport Club in 2007 to help other people with disabilities through sports.

In 2012, 48 athletes with disabilities participated in athletic competition through the Paralympic Committee of North Kivu. Today, the organization has 80 members.

Some 10 million people in DRC have physical disabilities, according to Handicap International, a Nobel Peace Prize-winning organization that supports people with disabilities in conflict and disaster zones.

More than two decades of armed conflict between the government and dozens of armed groups have contributed to the high incidence of disabilities here. Fighting stems from tribal conflicts and competition for resources. The International Committee of the Red Cross has fit more than 5,000 conflict amputees with orthopedic devices since it began offering the treatment in 1998.

Poor health care also contributes to the prevalence of disabilities.

Malnutrition, tuberculosis and lack of prenatal care cause many spinal deformities. The polio virus also is active here; some 12 percent of DRC children are unvaccinated against the crippling disease, the Global Polio Eradication Initiative estimates.

And poorly administered antimalarial hip injections leave thousands of children with lower-limb disabilities, according to Stand Proud, a U.S.-based organization that works with young people with disabilities in DRC. Sports are a great outlet for young people with disabilities, says Jacque Maheshe, youth coordinator of the Paralympic Committee of DRC and secretary-general of the Paralympic Committee of North Kivu. Lacking access to employment opportunities, many become beggars, he says.

“Disabled people are not given any consideration in their respective families, where they are thought of as good for nothing,” Maheshe says. “Stigma begins within the family and spreads to the community.”

But stigma isn’t the only thing holding back people with disabilities, Maheshe says.

“One of the most crucial problems is that there is no appropriate infrastructure for the disabled here,” he says. “You can seldom find a building with a ramp for wheelchairs, or a lift.”

Badacoka, the basketball player, agrees. But ramps are only the beginning of the issue.

The unpaved roads are covered with sharp lava rocks, making them unpassable to many people with disabilities, he says. (Mount Nyiragongo, an active stratovolcano, sits above Goma. The lava rock strewn on streets throughout the city is evidence of its most recent eruption, in 2002.)

“It’s not easy to cross the busy streets in Goma,” he says.

Badacoka says he gets by as well as he can with a dearth of crosswalks, traffic lights and respect.

“Life here is difficult for the disabled,” he says. “We are obliged to live like non-disabled people. I always have to cross the road like the other persons.”

The committee aims to spread Paralympic sports throughout other parts of the eastern provinces and Bandundu, a western province, Maheshe says.

“Our committee in Goma faces different problems,” he says. “The most important is to find adequate sports ground for disabled people.”

Teams often have nowhere to play because courts and fields are not flat or safe enough for wheelchair users.

“Not having sport infrastructures is a big problem,” Maheshe says. “We have more than five sports clubs, but we have nowhere to practice because there are no suitable sport ground for disabled people.”

Anaclet Mpongo, chief of the sports and recreation division of North Kivu province, says the government is ready to support adaptive sports.

“We have already offered them some land where they will build a playing court appropriate to their sports,” he says. “We hope that this sport will grow and that they will participate in more competitions in the future.”

The Paralympic Committee of North Kivu lacks funds for other essentials as well.

“We were not able to participate in several competitions because of lack of means to pay for transportation,” Maheshe says. “We missed more than three occasions where our athletes should have participated in important competitions.”

In addition, they try to help athletes pay for their transportation to Thursday and Saturday practices, but many live far from Goma, so transportation costs can prove to be expensive.

“Some of our athletes come from Ndosho,” which is 15 kilometers (9 miles) away, he says. “They have to travel for an hour in taxi or on a motorcycle to get here. It is not easy at all. I appreciate their bravery because they manifest the willingness to train.”

Others are similarly inspired by athletes in the program.

Didier Mbalume, one of the fans watching the wheelchair basketball practice, says she comes to watch because she admires the players’ courage.

“I cannot miss any Paralympic training session or competitions, because every time I see these people playing I am surprised by their courage,” she says. “Very few people who claim to be able-bodied have such courage.”

Athlete Joyeuse Ruta, who uses a prosthesis to walk, appreciates the support the athletes receive from fans.

The court feels like home for Ruta now. She says it’s the only place in town where she feels comfortable.

“My hands, which were normally weak, are starting to become strong through sports,” she says, waving her hands enthusiastically. “I feel revived.”

The opportunity to play sports has been transformational, Badacoka says. Playing sports has given him the confidence to dream big.

“I’m sure that people will talk about me,” he says. “But not as a disabled person. As a champion.”

Sylvester Ndahayo, GPJ, translated this article from French and some interviews from Swahili.