Skip to main content
The story you are reading was published on Sunday February 19, 2017. To read more recent stories click here. 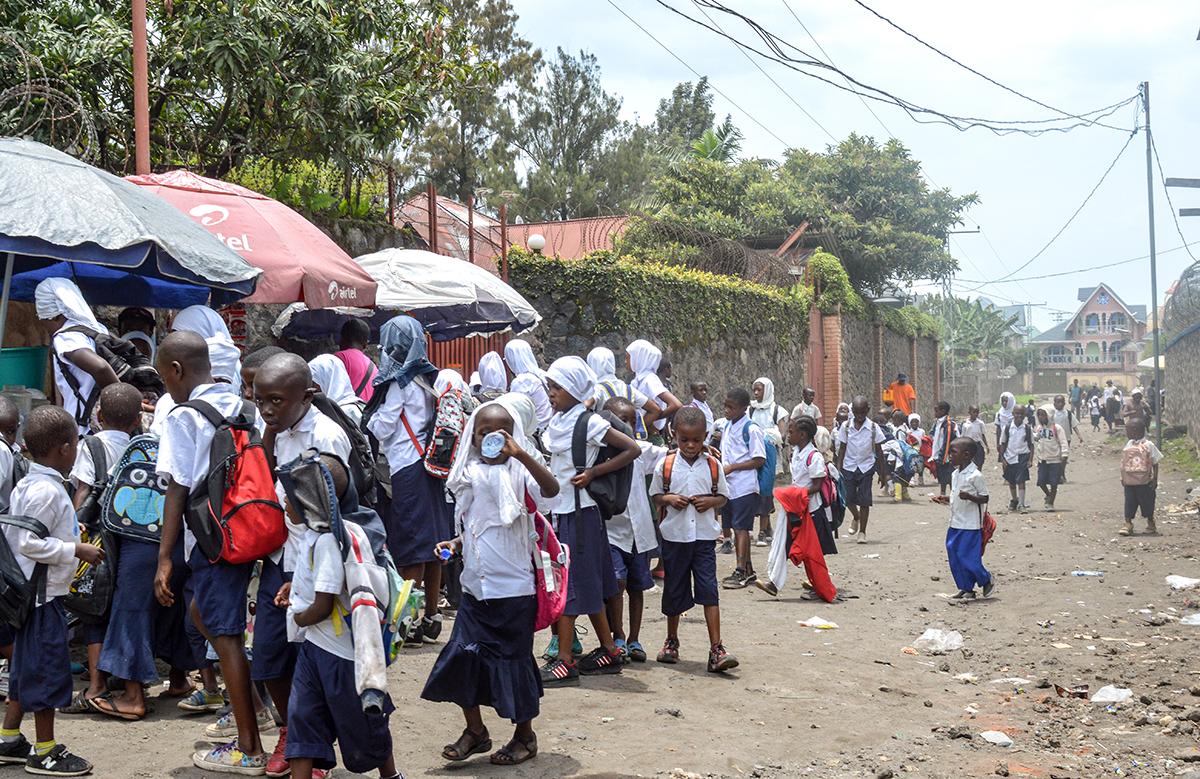 GOMA, DEMOCRATIC REPUBLIC OF CONGO — A whistle sounds, and traffic yields to the blue-and-white-uniformed children hoofing it to school. They are children from families who can afford to pay the rising cost of teacher bonuses that public schools are requiring to augment wages.

The costs have been rising — in some cases doubling to $40 per semester — and even some families who have been able to pay the fee fear the loss of education for their children in a country where 59 percent of the population lives on less than $1.25 per day.

Three of Georgette Kavira’s 11 children have been sent home from school for not paying bonuses and may end up out of school permanently if her family cannot find money to pay the bonuses.

“As the economic situation is becoming more and more disastrous, I am forced to pull some of my kids out of school due to lack of money to pay,” says Kavira, who lives in the Katoyi neighborhood of Goma’s Kalisimbi area. Three of her children are in primary school, and two others are in college and sell cellphone airtime to help her with costs for the rest. When funds are low, she says, it is hardest to justify paying the bonuses for her three in high school. They are the ones that are out of school now.

Teacher salaries are a major challenge for Congolese communities, where public education is a hybrid system comprising schools managed by the government with the help of faith-based organizations.

While Article 43 of the nation’s constitution stipulates that primary education is compulsory and free in public school, the rising fees prevent many children from accessing primary education and make the DRC, with an estimated 3.5 million primary school-age children out of school, a nation with one of the highest numbers of out-of-school children in the world, according to the Global Partnership for Education. The group, which leverages aid to encourage governments to allocate up to 20 percent of national budgets to education, says DRC is making strides toward this goal, and almost doubled its share of the budget allocated to education from 9 percent in 2010 to 17.8 percent in 2014.

Yet three in 10 children in the DRC still fail to complete primary school, according to a 2016 UNICEF report, using government figures from the DRC’s 2nd State Report of the National Education System. Further, the report says 30 percent of those dropping out do so at a very young age, between grades 1 and 2. Only six out of 10 girls complete primary school, compared with eight of 10 boys. 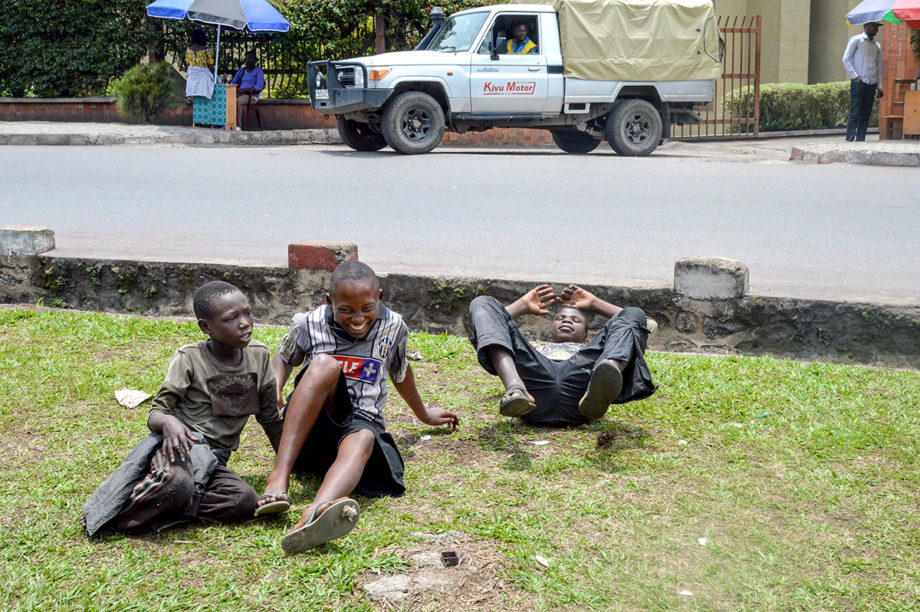 These young children play beside the road in the town of Goma, DRC. They spend the day often unattended, begging and doing small jobs for food. While the government says primary school is free, children whose parents can’t pay bonus fees to teachers are prevented from attending classes.

The government pay is so low that some teachers give it the French acronym of AIDS, namely SIDA —“Salaire Insuffisant Difficilement Acquis,” which translates as “Low wages earned with difficulty.” Thus, schools mandate funds from parents for bonuses to motivate teachers, since otherwise their wages are insufficient and they would have to find work elsewhere.

Parents and teachers alike are concerned that the inability of the government to pay teachers living wages further deteriorates education as the country continues its recovery from successive wars.

Pierrot Bahanuzi, who teaches French at the Institute of Goma, says educators cannot exist on the funds the government pays.

“It is incomprehensible how a national MP [member of Parliament] can earn FC 13 million ($10,213), excluding all other benefits, whilst their compatriot serving as a teacher earns FC 103,000 ($80) only, without any other benefits,” he says. “This is unacceptable. One MP can pay more than 120 teachers with his monthly wages!”

It is incomprehensible how a national MP [member of Parliament] can earn FC 13 million ($10,213), excluding all other benefits, whilst their compatriot serving as a teacher earns FC 103,000 ($80) only, without any other benefits.Pierrot Bahanuzi, a French teacher at the Institute of Goma

Bahanuzi says the bonus payments not only prevent children from going to school but hurt education in other ways.

“As parents have to contribute to school operating costs, they no longer want their children to repeat grades, for fear of incurring more school fees. Worse still, students have become unruly because we’re afraid to send them home, as this can adversely impact our monthly package. I personally believe that this bonus pay by the parents constitutes a crime against the educational system of our country,” he says.

Because of economic pressure, he says, some school authorities spend their time counting money coming from parents into schools’ coffers, instead of directing their attention to educational issues. “School authorities yield to temptations to act more like accountants than teachers. How do you expect them to impart quality education to the students?” he says.

“At the end of each month, the recovery of unpaid school fees starts off in a harsh way. Students with outstanding school fees are denied the privileges of attending classes even in case of quizzes or exams,” he says.

“For school authorities to claw back unpaid school fees, children are at all times made to stand outside classrooms while other students are studying,” Salomon says.

He adds that school classes are becoming enormous because of the funding concerns, and that the maximum number of students per class has ended up being the least of schools’ concerns. Some students are studying in supersized classrooms, and one class may have 70 students or more. 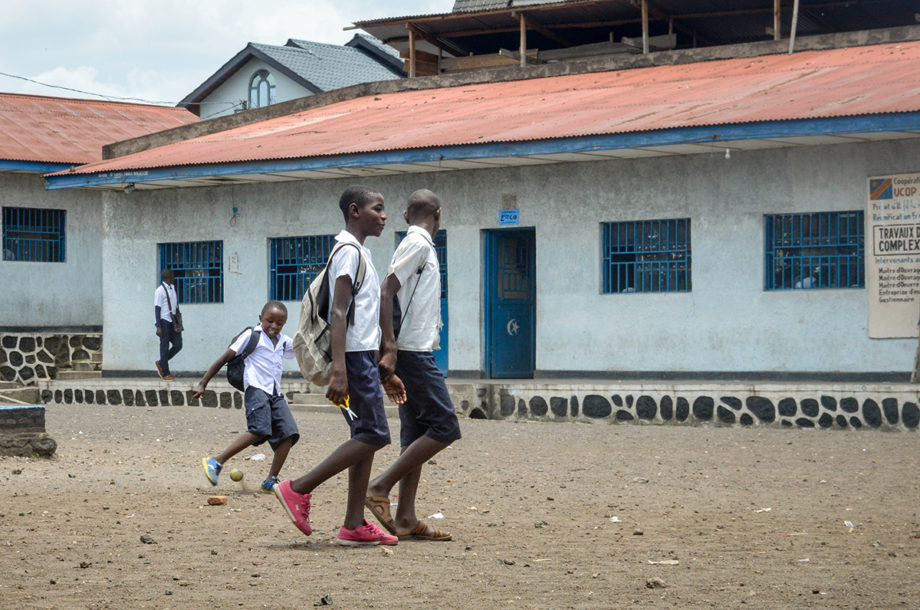 Children, whose parents can afford the required bonuses, return home from school in Goma, DRC.

“It’s very difficult for one teacher to handle such a class,” Salomon says.

Maria Ushindi, a mother of three whose youngest child is 7, says she can no longer afford to send her children to school.

“Now that I’m struggling to feed my kids, how can I afford to pay school fees? My first priority is to find fufu and vegetables to ensure that they don’t go hungry,” she says. “Of course, I want them to go to school like other children, but I cannot find enough money. I’ve no choice but to put their futures into God’s hands.”

Correction: Two captions in the original version of this story contained inaccurate dates. Captions should have referenced October 2016, not October 2017. The article has been updated. Global Press Journal regrets these errors.