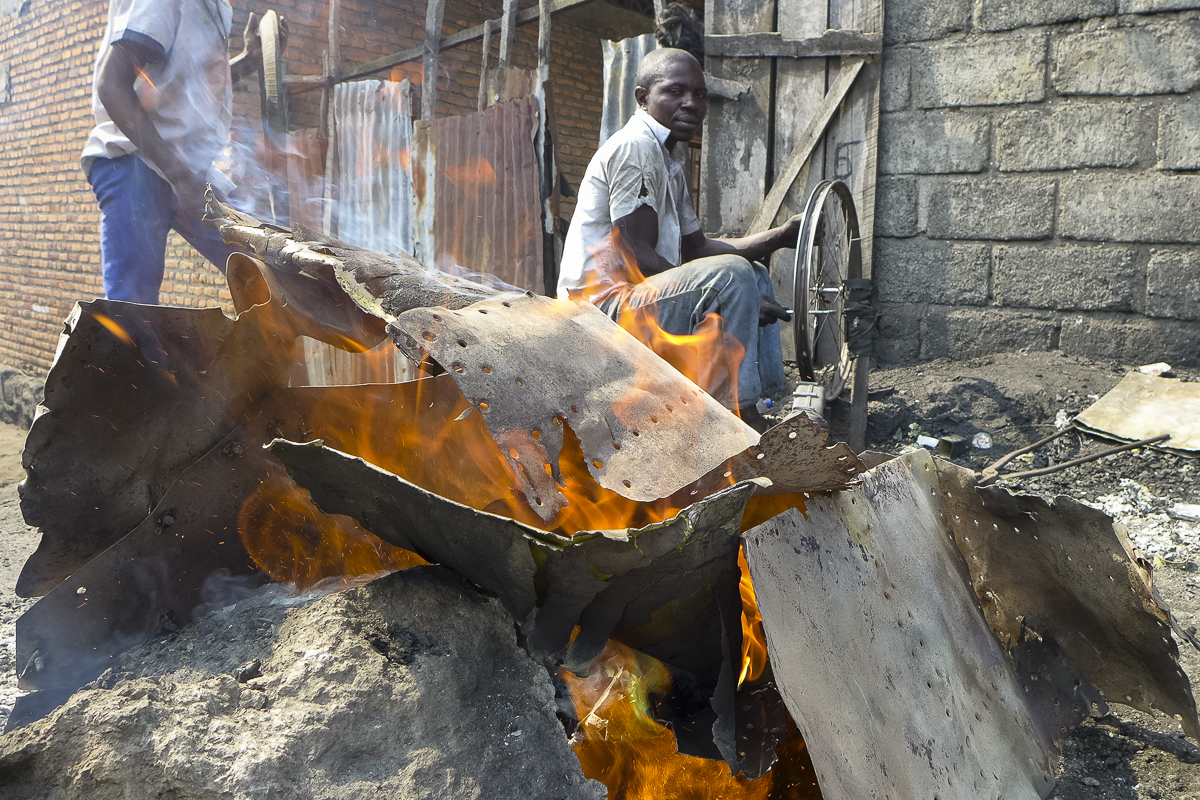 GOMA, DEMOCRATIC REPUBLIC OF CONGO — Children play on old airplane parts that litter the road. For some, the metal pieces are racks on which to dry their house mats.

Old cars and their parts are heaped near a fire that burns outside a concrete-block house, which appears to be unfinished. Inside the house, stones and bricks cover the ground, and pieces of sheet metal are scattered around.

This is “No Hard Feelings,” or “Sans Rancune,” a workshop dedicated to supplying Goma’s poorest residents with cooking pots, utensils and even home décor, all made from scrap metal. 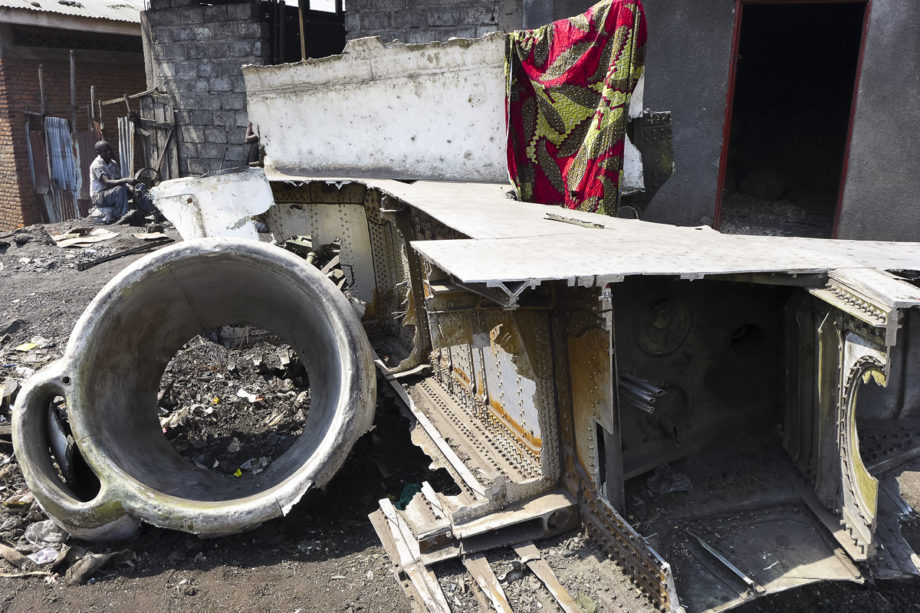 “No Hard Feelings” is a workshop in Goma, Democratic Republic of Congo, that uses scrap metal from planes and vehicles to make affordable cooking pots and other household goods.

Sitting near the fire is Désiré Hamisi, 39, a married father of two and the founder of “No Hard Feelings.” He opened the shop in 2010.

At first, Hamisi says, people in his neighborhood were skeptical of his products.

“The work initially seemed difficult, due to lack of local residents’ confidence in my products,” Hamisi says.

But soon, he says, they realized they could skip the 4-kilometer (2.5-mile) walk to the market in city center, where kitchenware is commonly sold, and save money too.

“It wasn’t until nine months after I started my workshop that people gradually began buying my cooking pots,” Hamisi says.

Years ago, on a trip to Kigali in neighboring Rwanda, Hamisi says he was inspired by a childhood friend who made kitchenware for his neighbors from metal scraps. Hamisi only completed third grade, but his passion for art and helping people motivated him to return to Goma and start a workshop of his own.

“I haven’t learned to make all this at school,” he says. “It’s just a result of my passion for art.”

Like so many necessities here, kitchenware is imported into Goma. There are no local factories.

To make up for the lack of affordable basic household goods here, Hamisi works with local airline staffers at the nearby airport. They sell him airplane parts that are no longer in use, at affordable prices. He also frequents the local mechanics’ garages to source usable car parts to make his kitchenware.

DRC is one of the most resource-rich places on Earth, but the search for basic metal pots, pans and utensils forces residents across borders. Some go to Uganda to shop at markets in Kampala, where prices are cheap. Others cross the border into Rwanda to buy kitchen goods in Gisenyi, but prices are steeper there. Those who can’t travel used to be confined to the main market in Goma, where prices are the highest.

I haven't learned to make all this at school. It’s just a result of my passion for art. Désiré Hamisi, 39, a married father of two and the founder of “No Hard Feelings,” a metal workshop

The East African Community is a bloc formed by Rwanda, Uganda, Burundi, Kenya, Tanzania and South Sudan, which is on its way to becoming the newest full member. Cooperation among these countries leads to lower prices on a plethora of goods traded by member states. But those privileges do not extend to DRC, which is not a member. Congolese people pay visa fees to enter many of the other countries and do not enjoy the lower commodity prices at home.

“We buy kitchen utensils like saucepans, spoons, plates and even plastic basins from Kampala or in Rwanda at low prices and resell them at higher ones in Goma, because transport and visa costs are high,” says Marius Ganza, a trader and dealer in saucepans at the Alanine Market in Goma.

A dozen spoons purchased at a local market cost from $5 to $10, depending on the quality. A set of high-quality pots can cost up to $50. 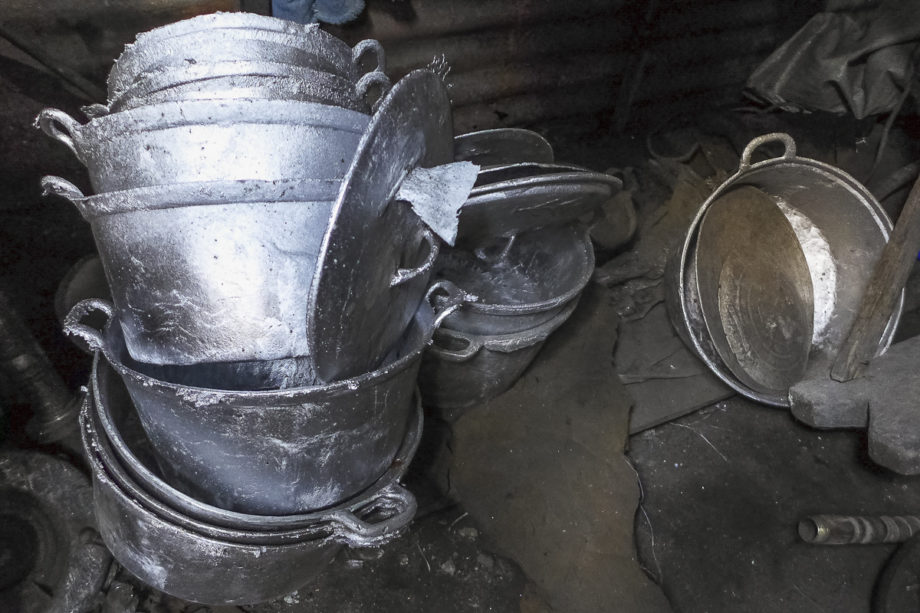 High-quality kitchen supplies are expensive in Goma, where many household goods are imported from other countries. People like the pots made in Désiré Hamisi’s shop because they’re strong and affordable.

Hamisi and his five employees produce five to 10 cooking pots per day. Each employee earns 3 percent of the price of the pot, which ranges from $2 to $30.

“We have opted for these prices because it attracts a lot of customers, and it’s tailored to the financial means of the residents of my neighborhood,” Hamisi says.

Hamisi says he sees 10 to 15 customers every day.

“I sometimes find myself with 40,000 Congolese francs ($42) in my cashbox,” he says. “And in this particular case, I can say that my day has been blessed.”

The average annual income in DRC is just $380, according to current World Bank data.

Residents say the “No Hard Feelings” workshop is a relief for those who cannot afford to buy imported utensils.

Housewives in Kahembe, the local neighborhood, are Hamisi’s most frequent clients.

“These cooking pots are convenient for us women who cook using firewood,” Fatuma Muhamedi, a housewife from Kahembe. “They help us cook rice, beans and even vegetables like sombe.”

Sombe is a stew of cassava leaves.

“We prefer them to modern saucepans,” Muhamedi says.

Others say these pots hark back to an earlier time when household items were of higher quality.

“These traditional cooking pots are reminiscent of the time of our grandparents, when only earthen pots existed. They were used by women when there were very important visitors in the family, such as during the payment of bride price or wedding ceremonies,” says Julia Lumbashi, 55.

“This little workshop in the neighborhood contributes a lot to the improvement of the living conditions of the population and to the fight against unemployment among the residents of his avenue,” says Muhigirwa.

Senghor Mbale, 30, works at “No Hard Feelings.” He says he is in charge heating materials and molding them into shape.

“With what I earn here, I manage to cater to the needs of my family by paying medical bills for my mother, who suffers from diabetes,” he says.

Hamisi’s employees say they would struggle to find employment elsewhere.

Mbale has one eye. He lost the other in in an accident in 2013, when he was working on an aluminum pot at Hamisi’s workshop. 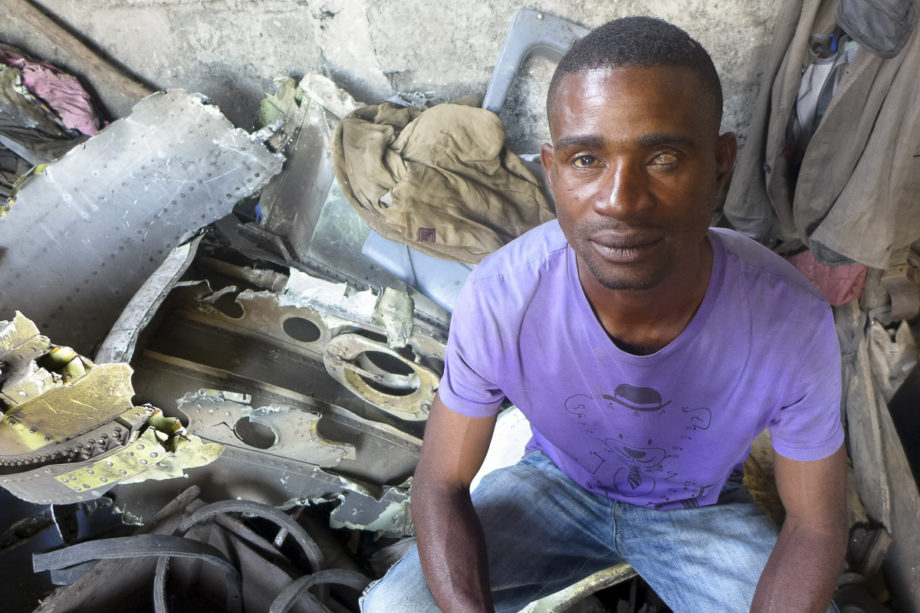 Senghor Mbale, a metal worker at “No Hard Feelings,” lost an eye in an accident in the shop, when he was working with hot aluminum. His family relies on his paycheck.

“My work is everything I have,” he says. “If I gave up after my accident, who then will pay medical bills for my mother?”

Despite its positive impact, some local people say the workshop is an environmental hazard. It emits a foul odor that places anyone nearby in danger, says Lebeau Maliyamungu, a resident.

“Apart from the smell, the smoke from these burning materials bother us a lot,” he says. “I think that this workshop should be relocated to a place far away from the city.”

Dr. Emmanuel Mujinga Mutombo, an expert in public health, says the smoke caused by burning aluminum or other materials may have a negative impact on the health of local residents.

“This smoke contributes to the deterioration of the atmosphere, and can cause certain diseases such as cough, heart disease and other diseases, especially among children and expecting mothers,” Mutombo says. “In case of explosion, these aluminum and other materials can cause lung diseases or even lung cancer in adults.”

Still, Hamisi believes he is paving the way for a better future for his neighbors.

“When I am in my workshop, seeing the work done by my employees, it gives me a good feeling inside. It offers room for hope,” he says.

To the environmental complaints, Hamisi says he and his team are aiming to create a more efficient process that would decrease burning.

“We are gradually improving our work,” he says. “Initially, my idea was to make only traditional cooking pots. But presently, we manufacture even objects for house decoration, spoons and different forms of flowers, and all this with the same materials from aircraft and vehicle wreckages.”

Supplying residents of Goma is just the beginning, he says.

“I hope that my workshop will grow and expand so that it will eventually be able to sell low-priced cooking pots throughout the country,” Hamisi says.