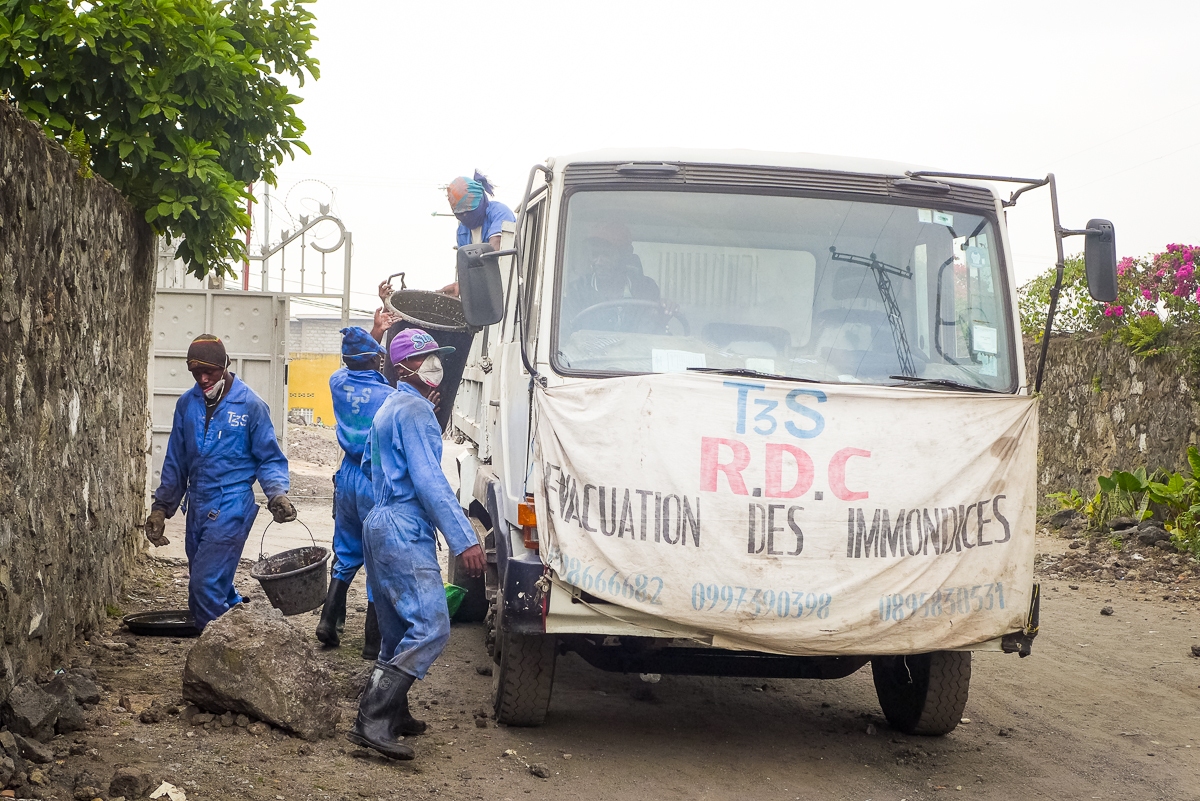 The lack of refuse bins and collection services is evident everywhere in Goma, the capital of DRC’s North Kivu province.

Downtown, people eat on the roadsides and throw food waste and wrappers into the streets.

At Virunga Market, one of the four major markets in Goma, food vendors display their fish and produce on the ground, near a mountain of garbage swarming with flies.

Across town, in an alleyway in the Mapendo neighborhood, pools of stagnant water block pedestrian passage. No gutters drain the pools of filthy, trash-strewn water.

The streets of Birere, a slum neighborhood near the Rwandan border, also are strewn with trash. Here, the pools of smelly, stagnant water are so deep that even motorists have difficulty passing.

But one vehicle, a Mitsubishi Fuso truck, is commonly seen speeding through the busy, dirty streets of Birere. The truck leads with a large banner that reads: “Evacuation des Immondices,” or Evacuation of Trash. The painted banner provides phone numbers for the waste collection service.

At the wheel of the truck is Celine Bolangi, a married mother of three who is passionate about cleaning up the streets of Goma. She and her four onboard employees, all dressed in overalls and wearing facemasks, are here to collect garbage and haul it to the community’s dumping ground, a few open fields around Lac Vert, 13 kilometers (8 miles) from Goma.

The constant presence of trash in Bolangi’s neighborhood, the Katindo area of Goma, drove her to establish her own garbage collection service.

“In the beginning, people in my neighborhood could not believe it,” says Bolangi, 30. “They were surprised to see a young woman creating an initiative that men did not yet believe possible. They were dubious about my abilities.”

After two years of study at the University of Goma, Bolangi says she was not able to find a job in Goma, where the informal economy produces few opportunities, even for educated residents.

Repulsed by the garbage problem and determined to feed her family, Bolangi decided to employ herself as an independent garbage collector. She disregarded naysayers.

“It is hard work,” she says. “Some people thought that it was an idea that could not be sustainable.”

She provides residents with trash bags and asks that they put out the full bags for collection on the weekend. Calling her business simply Garbage Collection, Bolangi charges each customer household 500 Congolese francs (54 cents) a week for trash removal.

Bolangi says she hopes more residents – and the city government – will take notice of the benefits of living in cleaner neighborhoods.

“My garbage collection service plays a very important role in my community,” she says. “Collecting garbage from residents will enable them to live in a clean environment free of any form of infection.”

Goma, one of the largest cities in DRC, lacks public trash bins and doesn’t operate any public trash collection services. The ubiquitous trash in the city poses many human health hazards, health experts say. The city government planned to start collecting trash last month, but it has yet to launch the operation. As a result, Bolangi’s private, small-scale service remains one of the few garbage collection operations in the city.

Bolangi, who has been in business just five months, says she and her crew collect garbage from more than 150 homes each weekend.

The costs of the operation are minimal, she says. She buys about 20 liters (5 gallons) of fuel each week and pays her employees a standard hourly wage. After expenses, she earns about 50,000 francs ($54) a week, she says.

Goma’s city council has been slow to address the sanitation problem. Last month the council, which governs the two communes of Goma and Karisimbi, announced plans to start a trash collection service in both areas.

Many Goma residents are unaware of the health consequences of living amid discarded food, trash and even human waste.

In the Birere and Himbi neighborhoods, residents often prepare food next to garbage heaps. Children play amid pools of stagnant, foul-smelling water.

“In our place, knowledge of hygiene does not exist,” says Maria Muhoza, a Himbi resident.

Trash collection services will only succeed if people learn about hygiene and sanitation, Muhoza says.

Ferdinand Ngoy, a nurse at the Murara Health Center in Goma, says residents must learn that garbage and foul standing water expose the population to cholera, typhoid fever and other illnesses.

“Often there are five households on the same plot – all without a trash bin,” he says. “They have no choice but to throw household waste onto the street.”

Others burn their garbage, which pollutes the water and air, he says.

But residents say Bolangi provides too few trash bags to meet their needs. Burning is the next best option, they say.

Waste burning puts vulnerable populations at serious risk. Open burning of waste raises “issues of environmental and social justice, as the people most affected by such precarious practices are usually the poor who live and work adjacent to dump sites,” according to a report by the United Nation Environment Program.

Bolangi is doing her best to discourage waste burning.

“I no longer burn my garbage thanks to the service that Celine has offered to us,” says Faida Mwajuma, a Goma resident who has been using Bolangi’s service for several months. “My plot is now clean.”

Residents of the neighborhoods Bolangi serves give the service mixed reviews.

Bahati Saidi, who lives in Bolangi’s neighborhood, calls her a courageous woman.

“When I see how she sacrifices herself for the wellbeing of the community, I envy her very much,” Saidi says.

Others say the service is too inconsistent to make much of a difference.

“As for me, I cannot subscribe to her service, because when she gives us an appointment, she does not honor it,” says Mapendo Aziza, who commonly burns her trash. “She sometimes arrives after two weeks. She is too slow.”

Aziza questions whether a woman is up to the task.

“If she had been a man, the service would be fantastic,” Aziza says.

Bolangi admits that her service can be inconsistent but says that’s only because her vehicle often breaks down. It has nothing to do with being a woman, she says.

“When Celine’s vehicle breaks down, it is the catastrophe since the whole neighborhood complains about her absence,” Mwajuma says.

Ndoole, the mayor, has begun paying more attention to sanitation issues recently. Earlier this year, Ndoole closed down several restaurants in the Birere neighborhood over sanitation violations. He has also advocated putting trash bins on the streets and establishing a citywide waste collection service.

The city of Goma signed an agreement with Caritas-Développement Congo, a nongovernmental organization, to create the Clean Goma Project, an initiative to increase awareness of sanitation.

The city and Caritas-Développement Congo are using community programming, including comedy and radio announcements, to boost understanding of sanitation, Ndoole says.

“Using comedians to deliver the message of sanitation, we will be able to reach a larger number of people,” he says. “Without this sensitization, behavioral change in the area of hygiene will not be achieved.”

The planned citywide trash collection service was slated to begin in May. Traders and shop owners are to pay 900 francs (97 cents) a month to ensure cleanliness outside their shops, Ndoole says.

There is no data available on the number of households that received the new trash collection service in May.

The Rev. Oswald Musoni, director of CDC, says the project will inform the population of hygiene rules and stress environmental cleanliness.

“And it will improve the image of Goma and also reduce the prevalence of diarrheal infections,” he says.

Bolangi welcomes the increasing awareness of sanitation. She aims to keep up the fight for a cleaner Goma.

“I am proud of myself for contributing of the development of my community,” she says, smiling widely. “I am now a policewoman for cleanliness.”