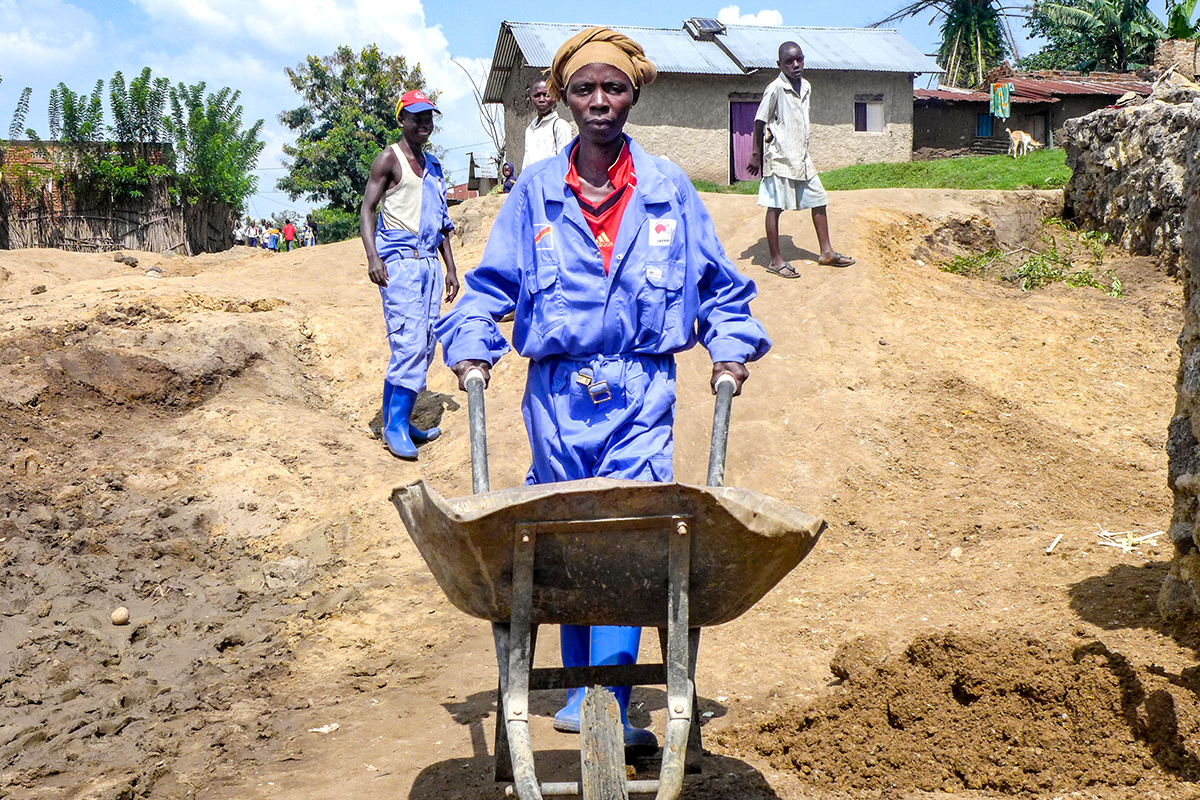 RUTSHURU, DEMOCRATIC REPUBLIC OF CONGO — It’s a hopeful sign in this embattled terrain. A few miles from the main road, a crowd is rebuilding a bridge that will enable farmers and traders once more to go from Mabungo to Buturande and allow students a shortened path to universities and schools.

The bridge-building workforce is unusual in that it consists mainly of women. Among them is Charline Kavira.

Dressed in blue overalls and plastic boots, Kavira empties her sand-filled spade into a wheelbarrow while others use long sticks to compress the soil. The mood is jovial, with women singing traditional songs in unison, the 35-year-old says, to “boost our endurance and strength.”

Kavira was internally displaced by war and is a widowed mother of three. She was forced from her home by conflict in Beni, a small city about 276 kilometers (about 171 miles) north of where she is helping to build the bridge near Rutshuru in North Kivu. She and her children sought refuge here after witnessing her husband’s death by machete in August.

A few miles from the main road, a crowd is rebuilding a bridge that will enable farmers and traders once more to go from Mabungo to Buturande and allow students a shortened path to universities and schools.

Rutshuru is home to many women displaced by conflict throughout the region. Some, like Kavira, fled killings in August attributed to the Ugandan Allied Democratic Forces (ADF) in Beni in which 100 were hacked to death with machetes, hammers and knives. Teddy Kataliko, a member of La Société Civile de Beni, a civil society group, confirms 51 civilian deaths in one day alone – Aug. 14, 2016.

When she arrived in Rutshuru, Kavira earned less-than-subsistence-level pay working the fields.

“After one month of suffering I heard on the radio that vulnerable women were invited to register as laborers for the rehabilitation works of the bridge and this is how I got registered as laborer at the site, free of charge, along with other women in the area,” Kavira says.

Kavira is one of 335 workers recruited to rehabilitate the Buturande Bridge, 153 of whom are considered vulnerable women that include those internally displaced, and military and non-military widows. The rest are men from the Rutshuru neighborhoods of Buzito, Murambi and Giseguru.

Kavira’s daily earnings are 4,800 Congolese Francs ($4). She sets aside $2 each day to help with future expenses and to one day start her own small business, she says.

Kavira’s time as a laborer on the project is limited to 70 days. After that participants are obliged to cede the place to other vulnerable women who in turn can earn money from working on the bridge.

Rebuilding the bridge is a joint project funded by the Japanese government and carried out by the Centre D’Intervention et de Promotion Sociale Participative, a local community development organization in Rutshuru and surrounding areas.

The objective is not only to reconstruct the bridge, says Jean Marie Moké, supervisor of the Buturande Bridge rehabilitation work. It is also to employ vulnerable women and show that women are capable of working on construction and other community rebuilding projects irrespective of origin, tribe, race or sex, he says. 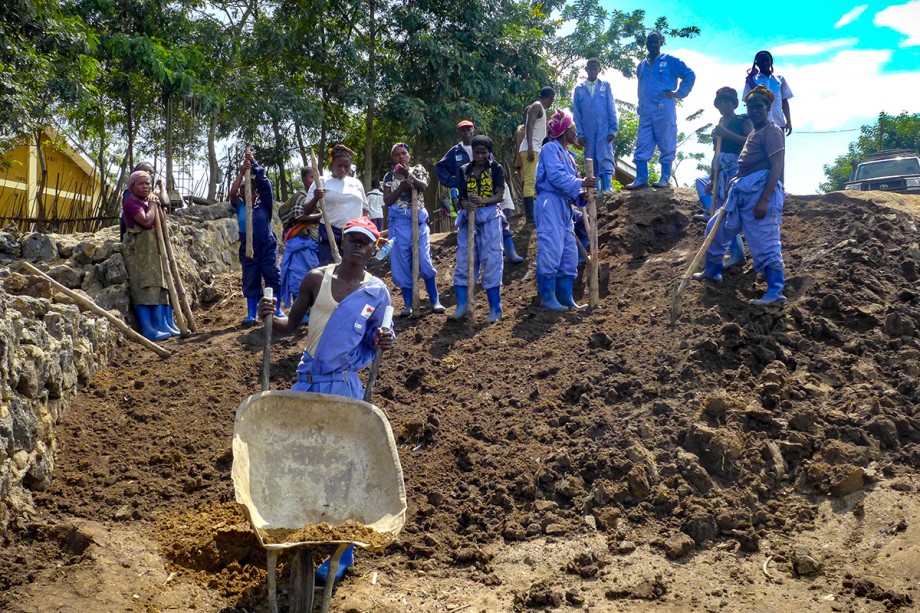 Women refugees are among those working to rebuild a bridge in Rutshuru, a community north of the regional capital Goma, in the Democratic Republic of Congo.

The number of women working on the crew in an area where most women work as traders or grow crops is unusual, says Chrisostome Mulenga, a resident of Rutshuru. “It is an innovation indeed.”

Because men monopolize most road and bridge work in DRC, “seeing passionate women working hard on construction sites is a new phenomenon and they deserve our encouragement,” says Julien Ndakola, a resident of the nearby Buzito neighborhood.

As for Kavira, the money earned helps pay for her family’s necessities. She plans to return to Beni once peace is restored.

“I want nothing more than to return home, and dig my fields and feed my kids without any hindrance,” she says.

Locals hail the rehabilitation of the Buturande Bridge, abandoned since 2004.

“We’re thrilled to see that once again we are going to use this bridge after so many years,” says Paul Banyungu, who lives nearby. “I could only see people moving on the other side without being able to cross it. Now that the rehabilitation works have started, I have hope.”