Skip to main content
The story you are reading was published on Tuesday April 21, 2015. To read more recent stories click here. 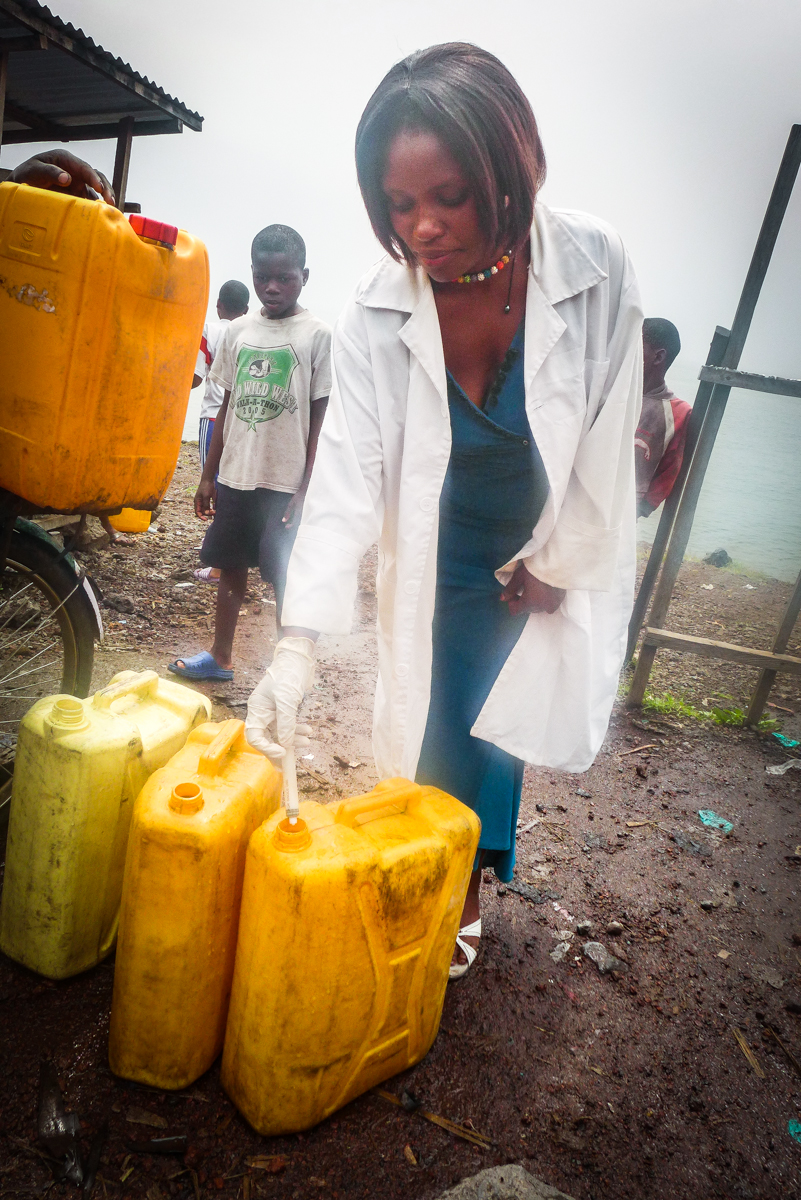 GOMA, DEMOCRATIC REPUBLIC OF CONGO – Every day, thousands of people here wake up ahead of the sun and throng the access points to Lake Kivu, one of the largest bodies of fresh water in Africa.

Children bathe. Men wash their cars. Women wash clothes and dump cooking waste. Many people use the lake as a latrine. Others come daily to collect water for their families or to sell in town.

Goma has only 57 water distribution sites, each with four taps, according to Mercy Corps, a global aid organization. That leaves most of Goma’s 1 million people reliant on water drawn directly from Lake Kivu.

One recent Sunday, Esther Shukuru toted a week’s worth of laundry to the lake at 5 a.m.

Like most other Goma residents, Shukuru does not have running water in her home. She can’t even obtain water in her neighborhood.

Sitting on a rock next to a pile of dirty clothes, a tub of soapy water before her, Shukuru scrubs her family’s laundry. It is important to her that her two children have clean clothes, she says.

“I come here every Sunday to do laundry because where I live there is no water,” she says. “Transporting a pile of wet clothes is not simple at all. Even someone who is strong cannot get home.”

Running a household without ready access to water is difficult, Shukuru says.

“Life without water is extremely hard, especially for women like me who oversee the welfare of a family,” she says. “I have to clean the house, prepare food, bathe my children, wash the clothes and clean my husband’s shoes. For all of this, I must have water.”

Paradoxically, Goma is on one of the world’s largest freshwater reservoirs and boasts one of the highest annual rainfall averages in the region.

But Goma lacks the infrastructure it needs to provide running water throughout the city. And Lake Kivu, the primary water source for the city’s residents, is dirty; untreated water from the lake is responsible for a rising number of cholera cases.

Lack of access to clean water has become a hot-button topic for residents, protesters, the local government and international agencies.

In an effort to prevent cholera in the meantime, international organizations have set up camp on the banks of the lake to purify visitors’ water supplies with chlorine. But a local youth movement says lakeshore chlorination is insufficient; its members and their supporters agitate for clean running water for the people of Goma.

Although DRC holds over half of Africa’s freshwater reserves and Goma is on one of the continent’s largest reservoirs, an estimated 51 million Congolese – 75 percent of the population – have no access to safe drinking water, according to the United Nations Environment Program, or UNEP.

Millennium Development Goals call for reducing the number of people without access to safe drinking water by half by the end of 2015. Local activists say that’s a far-off goal considering that total access to clean drinking water in DRC has increased by just 3 percent since 1990, according to the UN site for MDG indicators.

The nation would have to provide safe drinking water to more than 20 million more people by the end of the year to meet even its national development goals, which are far below the MDG targets, according to UNEP.

The lack of access to safe drinking water here causes more than inconvenience.

Over the past 12 months, 2,181 cases of cholera have been reported in Goma. And 16 of those cases have been fatal, according to Solidarités International, an organization that supplies chlorine injections at Lake Kivu.

A chlorinator agent with Solidarités International, Boroto treats water pulled from the lake by Goma residents.

“With the naked eye, we cannot see the problems that are in the water,” he says. “We are the heart of the project against cholera. Each can is purified by liquid chlorine that kills the germs.”

Afia Himbi Health Network, a regional health clinic, works in conjunction with local organizations to ensure that everyone who uses lake water has access to chlorine, says Beatrice Mishamba, a sanitation officer for the clinic. She is especially determined to chlorinate water collected from the lake for sale in town.

“We use chlorine to kill germs because lake water is very dirty,” she says. “Each person who collects lake water here should go through us.”

“The work I’m doing really helps people,” she says. “If not for this work, cholera could exterminate the people all around us.”

Mishamba cautions water carriers that chlorine is not a magic elixir.

“I tell them to wait 30 minutes to use the water because the chlorine needs time to eliminate the germs,” she says.

Furthermore, chlorine’s effect wears off after 48 hours, she says.

Ombeni Nzigire, 14, comes to the lake before school every day to fetch water for her family. She is grateful for the chlorine service, but she wishes the family’s water source were not so far from home.

“This method helps a lot, but it would be even better if the water could be accessible in our neighborhoods,” she says. “Coming to the lake every day is so tiring.”

Ombeni begins the daily chore at sunrise so she can complete it before school.

“Every morning I have to go get water,” she says. “I walk 45 minutes with full water bottles on my back. It’s very tiring. But I have to; I do not have a choice.”

Didier Habimana collects water at the lake to sell in Goma for 200 francs (22 cents) per liter.

The chlorine programs are good for his business, he says.

“Before, people bought water for washing or housecleaning only,” Habimana says. “But today they buy for other things, too, such as preparing food, … because they know that the water is clean. So my customers have increased.”

But many here say purifying containers of lake water is not enough. Infrastructure projects have been in the works since 2008, but progress on the rebuilding and expansion of the water network has been slow.

The city’s decrepit water system was constructed in the 1960s and decimated by lava flow after the 2002 eruption of Mount Nyiragongo, says Lynn Hector, a communications officer with Mercy Corps, one of the primary actors in the reconstruction project.

In partnership with the International Committee of the Red Cross, USAID, The United Kingdom’s Department for International Development and the local government, Mercy Corps has been involved in rebuilding the water network here since 2009, Hector says.

Hector writes in an email that the city’s 57 water supply stations serve an estimated 400,000 people.

However, an employee of DRC’s public sector water distribution company in Goma, REGIDESO, an acronym for Régie de Distribution d’Eau, says off the record that despite major investment by international aid organizations, REGIDESO serves only 26 percent of Goma residents.

Rebuilding the city’s water infrastructure has been a challenge.

“We knew from the start that the Goma water project would be a massive undertaking, and rehabilitating Goma’s water system took years of construction and innovative thinking,” Hector writes in an email.

Much of Goma is covered in hardened lava rock. When jackhammers proved inadequate to break it up, workers tackled the job with hand tools. Between 2009 and 2014, workers chiseled through kilometers of lava rock to lay new water pipes, Hector says.

“The new system pumps water from Lake Kivu to reservoirs that store and treat the water before it’s routed to tap stands throughout the city,” she says.

Still, residents here say progress is too slow and that the chlorination efforts are insufficient to meet the people’s water needs.

Beginning in June 2014, the youth movement LUCHA, an acronym for the French words for “Struggle for Change,” launched the “Goma Wants Water” campaign. More than 3,000 people have participated in marches demanding drinking water for Goma residents.

“I do not see how chlorine can destroy all of the dirty and salt found in Lake Kivu,” he says.

Nkulula points to a socioeconomic divide between those who use chlorine drops and those who drink water purified by more sophisticated methods.

“If chlorinated water was purified, everyone would use it,” he says. “But this not the case because people with higher incomes drink properly treated water, which is expensive.”

LUCHA believes Congolese citizens have a right to drinking water at home, Nkulula says. The country has the means to provide clean water to all of its citizens and must do so, he says.

LUCHA estimates that at least one person a month – usually a child – drowns in Lake Kivu while fetching water.

“Our campaign for clean water will continue until the day every home will have access to clean water,” he says. “No matter how long this will take, we will stop our campaign when our wishes are filled. We are fighting for change, and we hope to have this change.”

Despite the need for more lasting measures, Mishamba says she has witnessed positive change from the chlorine initiatives and intends to continue the work.

“I call on governments and NGOs to ensure that this program will never interrupt, because it saves lives,” she says.

Until the government and its partners provide clean water to Goma homes, city residents will continue to trek to the lake.

Shukuru dreams of a time when she will have running water in her home.

“I hope one day the tap will be everywhere here in Goma,” she says as she packs her family’s wet, freshly washed clothes back into bags and loads them on her back. “On that day we will be celebrating the end of suffering.”