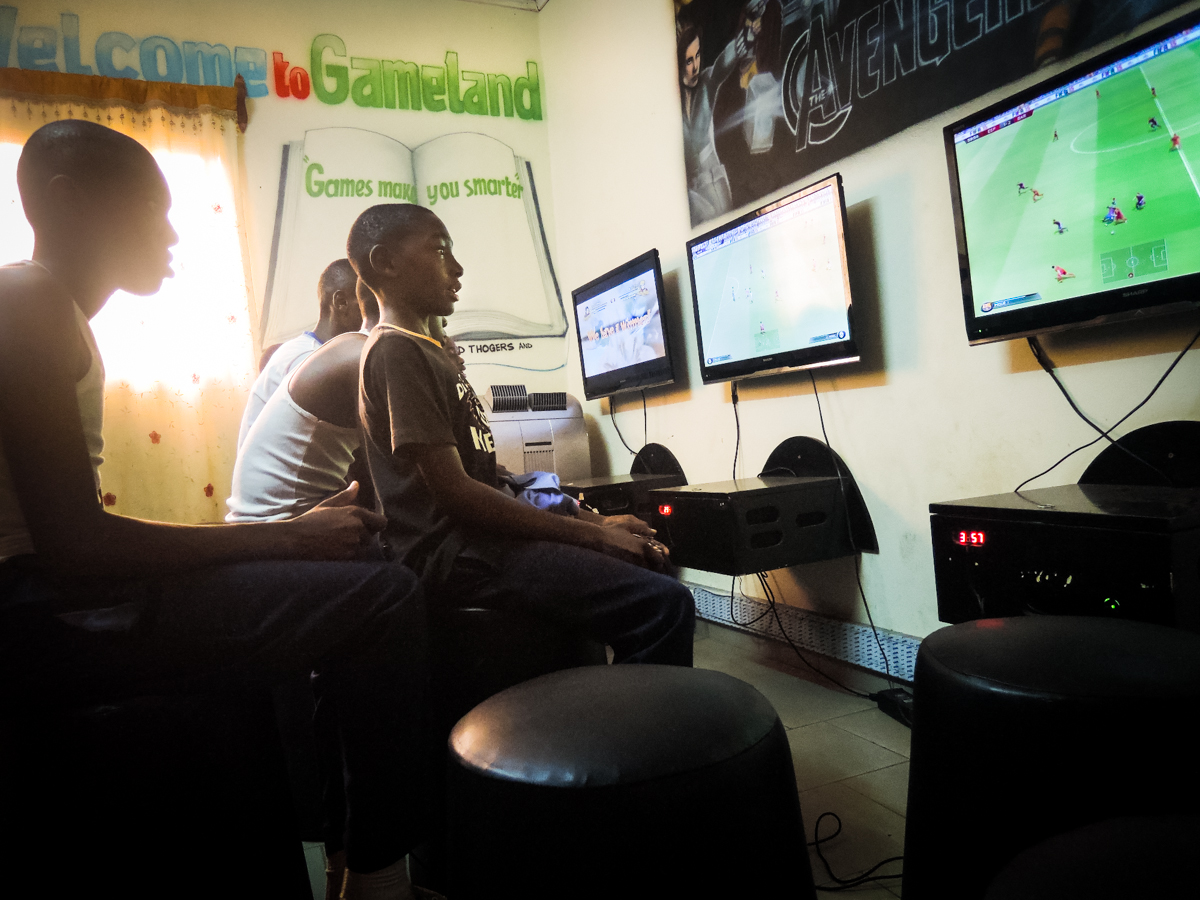 DOUALA, CAMEROON – After school on a Wednesday afternoon, Prosper Mawelet, 14, walks into the Knowledge and Business Center, a cybercafe in Douala, the economic capital of Cameroon.

Still dressed in his blue school uniform, Prosper takes a seat before a TV screen in the cafe’s gaming room, picks up a controller and begins playing video football.

The room is full of boys Prosper’s age, each facing a Sony PlayStation 3 or Xbox 360 game console with a controller in hand. They are so focused that commotion in the room doesn’t distract them. They shout in excitement when they win and jeer each other when they lose.

While some of these boys love to play and watch live football, they play video games with the same eager, intense expressions.

Prosper discovered the gaming room a few months ago while running an errand. Since then, he has played video games almost daily. He pays 300 Central African francs (50 cents) an hour to play, and he plays about three hours each session. Over a month, Prosper’s gaming fees could go a long way toward renting a room in this port city.

Like Prosper, most boys play with pocket money they get from their parents.

Prosper often plays as Lionel Messi, the Argentine football star, in a game that mimics play in the Champions League of the Union of European Football Associations. The UEFA Champions League is the most prestigious club competition in European football.

Teen boys and young men in Cameroon are increasingly playing video games that let them control virtual versions of some of the world’s top football stars.

These days, acting as Messi and other sports superstars through video games like Pro Evolution Soccer and the FIFA Football series is just as good as watching the stars on television, or even playing the game themselves, some of them say.

But some parents say the influx of gaming rooms isn’t good for their sons, and some experts agree. If it is not kept in check, the gaming habit might negatively affect boys’ social behavior, they say.

Video games have become popular among Cameroonian teenagers over the past decade and a half, says Nkensa Mayou, technical manager at the Knowledge and Business Center in Douala’s Bonamoussadi neighborhood, where Prosper often plays. The center opened in July 2014.

Initially, people played the games in their homes, he says. But in recent years, gaming rooms have sprouted up in the city. Boys and young men now spend hours playing video games in such rooms every day.

No studies have been conducted on how extensively Cameroonians play video games, but Mayou says the market is big.

Competition is stiff, Mayou says. Many entrepreneurs have opened gaming rooms in Douala, aiming to cash in on the trend; there are about four other gaming sites in the Bonamoussadi neighborhood alone. Some struggle, but most well-placed establishments do well.

“Every game room that opens here in Douala with sufficient visibility is bound to be successful,” he says.

Mayou’s gaming room, which has six gaming stations with Sony PlayStation 3 and Xbox 360 consoles, operates 12 hours a day. The room is mostly crowded once Douala high schools let out – at noon on Wednesdays and 2 p.m. other schooldays.

Most boys play for one and a half to three hours at a time, Mayou says. The most popular games are those that mimic UEFA Champions League tournaments.

“It is working beautifully,” he says. “It is a big added value for the enterprise to have a game room.”

Arsene Kingue, a 14-year-old Douala high school student, says his mother encourages him to play games to avoid getting stressed by school work.

When he was younger, he played video games at home, but now he plays at cybercafes near his home when he has time.

“Video games help one to forget certain things,” Arsene says. “We cannot study without some form of distraction.”

Jordy plays at cybercafes five times a week, between Monday and Saturday. He plays for two to three hours on weekdays and for about two hours on Saturday mornings.

“As you keep playing, you keep wanting to play it more and more,” Jordy says. “It is so real that you fall in love.”Jordy considers video games a sport just like those played at school.

“It is necessary to relax by practicing some sport,” he says.

Jordy also enjoys playing football out on the field.

Video gaming is good for teenagers, promoters say. Fantasizing that they are playing like the stars they admire gives them a feeling of adventure, Mayou says.

During play, the boys in the game room shout and celebrate when a player scores, and they feel bad whenever one loses, Mayou says.

“Not only are they spectators watching the game, but they are also actors playing the game,” he says.

Some of the gamers play football at school and others are just fans of the game, Mayou says. Video games enable boys to extend their enjoyment of the game beyond turf play.

Some parents and guardians are concerned that excessive gaming might negatively affect their children’s behavior and distract them from their work.

Judith Angwi, who runs a Douala convenience store, suspected her 18-year-old charge was up to something because it took him so long to return from purchasing trips.

Neighbors informed her the young man had been playing video games at a neighborhood cybercafe during work hours. She immediately forbade him to play any more video games.

“I was so worried and annoyed that a child would behave like that,” Angwi says.

The young man began taking his work seriously as soon as he stopped playing, Angwi says.

The young man declined to talk with GPJ.

There’s no consensus among experts about whether frequent video game activity has negative consequences. However, studies link video game addiction to depression, poor school performance, misconduct and other problems.

Evidence from Asian countries indicates young men are prone to becoming addicted to Internet gaming, according to the fifth edition of the Diagnostic and Statistical Manual of Mental Disorders, or DSM-5, the book used internationally to define and diagnose psychiatric disorders.

“The studies suggest that when these individuals are engrossed in Internet games, certain pathways in their brains are triggered in the same direct and intense way that a drug addict’s brain is affected by a particular substance,” according to the DSM-5. “The gaming prompts a neurological response that influences feelings of pleasure and reward, and the result, in the extreme, is manifested as addictive behavior.”

For Prosper and his friends, looking cool is part of the attraction of playing video football, says Savage Njikam, a lecturer and the head of the anthropology department at the University of Douala.

“It is a hype thing,” Njikam says. “If you play it, it means that you are in vogue amid a crowd.”

Before the advent of video games, teenagers just played football on the field and watched matches on TV, she says.

Now, they can extend that experience to a gaming room where, beyond watching matches, they get to control the players on the virtual field, Mayou says.

Parents worry less when their sons play actual football because they are familiar with the game, Njikam says.

Video games are new to many parents, and they say they are concerned about whether their children are exposing themselves to something harmful.