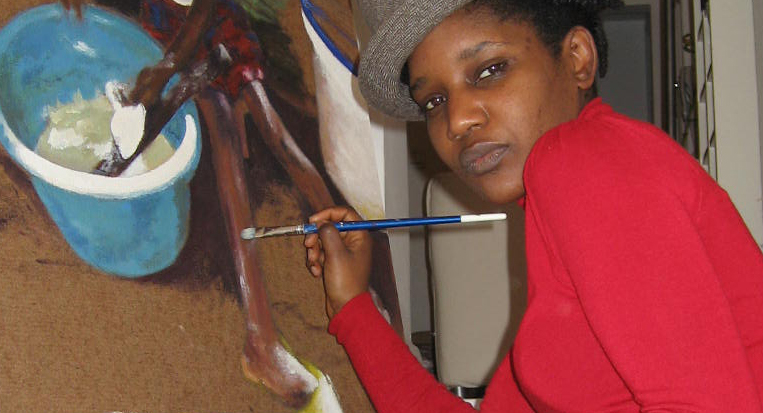 DOUALA, CAMEROON – Cameroonian artist Shiri Achu says her homeland inspires all her art. But abroad is where she has found success as a painter.

Achu is from Cameroon’s Northwest region but was raised in the Southwest region. She then moved with her family to the United Kingdom when she was 9. She says this is where her painting career began.

“My elder brother recalls there being a storage yard at the back of the house, which had some abandoned artist’s tools,” she says. “Apparently, I had found the materials, paints and paintbrushes and knew what I had to do with them and just had the passion to paint and draw.”

Currently based in the United States, Achu says she has earned the most recognition and tallied the most sales abroad. In London, she won her first award, Best Artist in Brent, in 2010 and was invited to exhibit her original paintings in Parliament and the Commonwealth Secretariat at the end of 2011.

She says she’s been fortunate that her oil and acrylic paintings have been recognized and bought worldwide. She works hard to sell them and promote her brand, Shiri Achu Art.

She says her signed and limited prints are popular abroad because people like having art that is unique. Her customers span the globe, from South Africa to Australia to the Czech Republic to the United States.

“They won’t like to know that the whole world has the exact same thing, especially when it comes to art,” she says.

She had her first solo exhibition at the end of 2011 in Douala, Cameroon’s economic capital. She says her work was well-received at the exhibit held at the French Cultural Center, now the French Institute. But there were few sales.

“Many complained that the price of my work was high but that they would love to own a piece,” Achu says.

She says that if she had a representative in Cameroon to make cost-effective limited prints and promote them to galleries, friends and art lovers, her work would sell here quite well. She hopes to hire one soon.

Although Cameroonian artists in the diaspora rely on their native country for inspiration, they say the purchasing power and ease of doing business abroad has enabled them to succeed in their creative careers. They voice gratitude for this success but say they wish there were a more supportive environment for artists in Cameroon so that they could move their operations home. Government officials and directors of cultural centers in Cameroon cite various opportunities for artists to develop and display their work but admit that more needs to be done.

In Cameroon, 40 percent of the population lives below the national poverty line, according to the World Bank. It cites stimulating growth and evenly distributing the dividends of this growth in order to reduce poverty as the country’s main development challenge.

Previously part of the Ministry of Information and Culture, the Ministry of Culture was created as a separate entity in 1992 in order to promote and develop the country’s broad national cultural identity as well as its international influence, according to the ministry website.

From creating beautiful paintings to haute couture, Cameroonian artists are promoting the country’s cultural glamour to the world. Yet, the home-based resources are not sufficient to support their projects or buy their work.

In the face of limited infrastructure and the difficulty of selling art, many Cameroonian artists are succeeding in the diaspora. Relying on their home country for inspiration, they are showcasing the beauty of Cameroonian culture around the world. They are also reaping a better profit from their art abroad than back home.

Kibonen Nfi is a Cameroonian fashion designer, but she operates in New York, where she says she can “live, breathe and eat fashion.” Moreover, she says people here appreciate her designs and pay her well for them.

A graduate of the Fashion Institute of Technology, Nfi shuttles between New York and Cameroon, which serves as the production location for her designs. Like Achu, she derives her inspiration from Cameroon yet receives the most business abroad. She sells her designs in the United States for more than five times the price that she sells them for in Cameroon.

One difference might be the purchasing power of consumers abroad. Nfi also says that fake designer goods are popular in Cameroon, while her targets are young professionals, savvy consumers and mature clients who understand the intricacy of her work.

Apart from sales, the ease or difficulty of setting up and doing business abroad versus in Cameroon is another point cited by artists in the diaspora.

Nfi says setting up her business, KiRette Couture, which she runs with her business partner and fellow fashion designer, Anrette Ngafor, was simple in the United States. It took just a few minutes to register it online, and a package containing all the necessary materials was delivered to her in the mail.

“Unlike in Cameroon,” she says, “where registration of a company takes days and months and there is no set procedure.”

Gabriel Ennumedi, delegate of the Ministry of Small and Medium-sized Enterprises in Cameroon’s Littoral region, says delays in setting up a business in Cameroon are often related to unscrupulous employees trying to exploit clients or to malfunctioning machines. He says the process is improving, though, with an operational system recently put in place to centralize the services.

Nfi says that support and resources for artists from the government, banks or other organizations is also low in Cameroon.

“I cannot wait to get something out of this country,” she says. “So far, Cameroon has been a pain for me.”

She urges the nation to realize that fashion feeds development. She proposes that banks give loans to small businesses and that the government finance and promote the art industry, since artists help to sell the image of Cameroon. Multinational corporations should also support and sponsor fashion events, activities and development, she says.

Achu, who also works as an architect, says the advantages of doing business in the United Kingdom and the United States include the availability and lower cost of quality working materials, such as canvases, acrylic paints and paintbrushes. She adds that printing machines abroad also make reproducing artwork more cost-effective.

“Whilst in Cameroon when I tried making prints in Buea, I was directed to a limited number of printers,” she says. “And the quality of some of the machines was not up to a standard I was happy to sell.”

First, because the themes of her art center around Cameroon and Africa, she laments not being surrounded by the very people, places and culture that inspire her work. So, she often travels back home and elsewhere in Africa to get inspiration to create more printings.

Secondly, she adds that it is challenging to arrange solo exhibitions abroad since there are few other Cameroonian artists to exhibit with. In addition to producing pieces that she will be excited to feature, she needs to find the venue, do the publicity and execute the exhibit on her own.

But there’s also an admittedly limited support system for artists back home in Cameroon.

“It is very difficult for artists here since there’s no market locally, especially with no galleries or commercial centers for art in Douala,” says Didier Schaub, artistic director of doual’art, a contemporary art center in Douala.

Schaub says artists are therefore obliged to look beyond Cameroon to other African countries and other continents for support.

But there are a few cultural centers in Douala, such as doual’art and the French Institute – both French-owned. The Ministry of Culture also supports artists.

Doual’art hosts eight to nine exhibitions for artists every year, Schaub says. Every three years, it also organizes the Salon Urbain de Douala, during which it inaugurates public art projects for the city of Douala. An example of such a project is the monumental structure erected at a strategic junction in the neighbourhood of Deido, which is a gateway to other major areas in the city.

The French Institute supports established and even budding artists, as long as their art is of good quality, subject matter and technical expertise, says cultural attaché Abraham Nana. The support includes helping musicians to organize concerts, painters to host exhibitions and writers to present their publications. Artists can also display their work in the center’s hall at no cost as long as they notify the staff of their event about two months in advance so that it can include them in its bimonthly brochure of cultural events.

For more prestigious opportunities for artists to display their work, Schaub suggests that the government of Cameroon create a worthy museum. He says that the National Museum of Yaoundé needs renovation to become efficient as an active national destination for cultural display and promotion.

He acknowledges that the government cannot do it all, but he says it definitely has a responsibility.

A commission meets regularly at the Ministry of Culture to review files submitted by artists and to select recipients of the government’s financial assistance. Artists can apply for funding of their projects as individuals, as a group or as a cultural enterprise. Ongla says the ministry selects artists in the varied cultural fields – from cinema to painting to literature – based on the importance of their projects.

He says the comission also favors artists who have proven themselves in their industry through their creative works and who can provide a portion of self-support besides that which they are seeking. But Ongla says he regrets that the ministry has yet to implement a process to help artists commercialize their products.

“You know, we’re very late in international exchanges in the field of culture because we have not developed our contacts with foreign countries,” he says.

In the meantime, artists have taken it upon themselves to develop their own contacts with foreign countries until there are more opportunities for them to operate at home.

Nfi, who says she draws a lot of her creative energy from Cameroon, dreams of someday opening a fair trade production plant in Cameroon. She wants it to be capable of industrial production to supply garments made locally to the world.

As for Achu, she says she would love to travel to as many African countries as possible to capture the essence of their cultures in her paintings. She has already painted the cultures of Cameroon, Nigeria and Kenya in her mission to promote the rich African cultures worldwide through her artwork.