Skip to main content
Anwar Hussain stands in a hospital with his wife, Parveena Begum, in a bed on one side and his son, 16-year-old Mohammad Ansuf, in a bed on another. His wife and two sons were injured when shelling from the Pakistani side of the Line of Control damaged their home. Hussain lives on the side of the line controlled by Indian-administered Kashmir.

A Land of Small Wars: Life on the Line of Control

Violence is nothing new for the area around the Line of Control, the demarcation dividing the Pakistani and Indian-administered sections of Kashmir. But for the people who live there, life in the crossfire takes a steep toll on their lives.

URI, INDIAN-ADMINISTERED KASHMIR — Anwar Hussain’s wife lays in a hospital bed. On another are his two sons. Hussain stands between them, still shell-shocked by what has happened to his family.

“We were sitting on the veranda of our house when all of a sudden, the shell hit my house with a huge noise,” he says. “When I opened my eyes, I saw my wife and two sons were covered in blood.”

That was on March 11, weeks after the family’s village, an outpost in the tense area that divides Pakistan and India, became an all-out war zone. 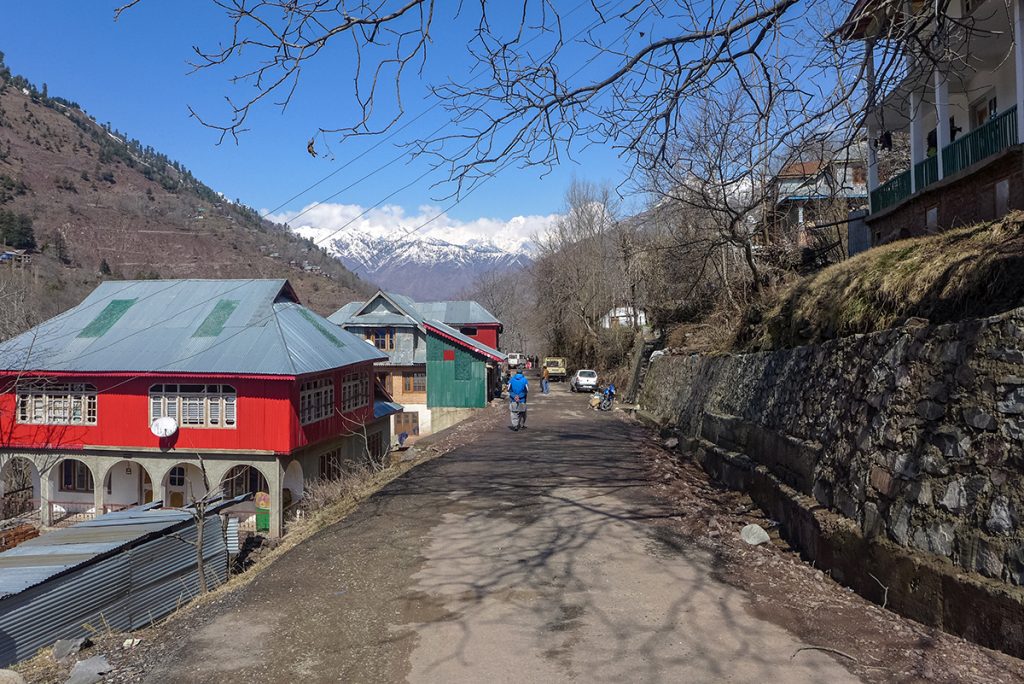 The village of Balkote abuts the Line of Control that separates the portion of Kashmir controlled by India and the portion controlled by Pakistan. Indian government officials say they’re working to provide bunkers for people who live near the line, but people in Balkote say there are none in their village.

The region of Kashmir stretches from Pakistan in the west, through India and into China in the east. Each of the three countries control sections of Kashmir, but ongoing disputes between India and Pakistan over the region have at times turned violent. The two countries are separated by a formal international border to the south. The boundary dividing the sections of Kashmir administered by India and Pakistan, however, is called the Line of Control.

Various cease-fire agreements have been signed since 1949, when the Line of Control was first established. Since then, both countries have repeatedly accused one another of violating those agreements.

Adding to the tension are armed groups that operate and sometimes resort to violence in the area. Some of them push for the region’s independence, or to be incorporated into Pakistan. Others focus on opposing India’s use of military forces to control the area it administers.

On Feb. 14, an estimated 40 members of India’s security forces were killed when a suicide bomber attacked a convoy in Indian-administered Kashmir.

That attack sparked an ongoing season of extreme tension throughout the Kashmir region and for Kashmiris who live elsewhere, too. (Read our coverage here.) 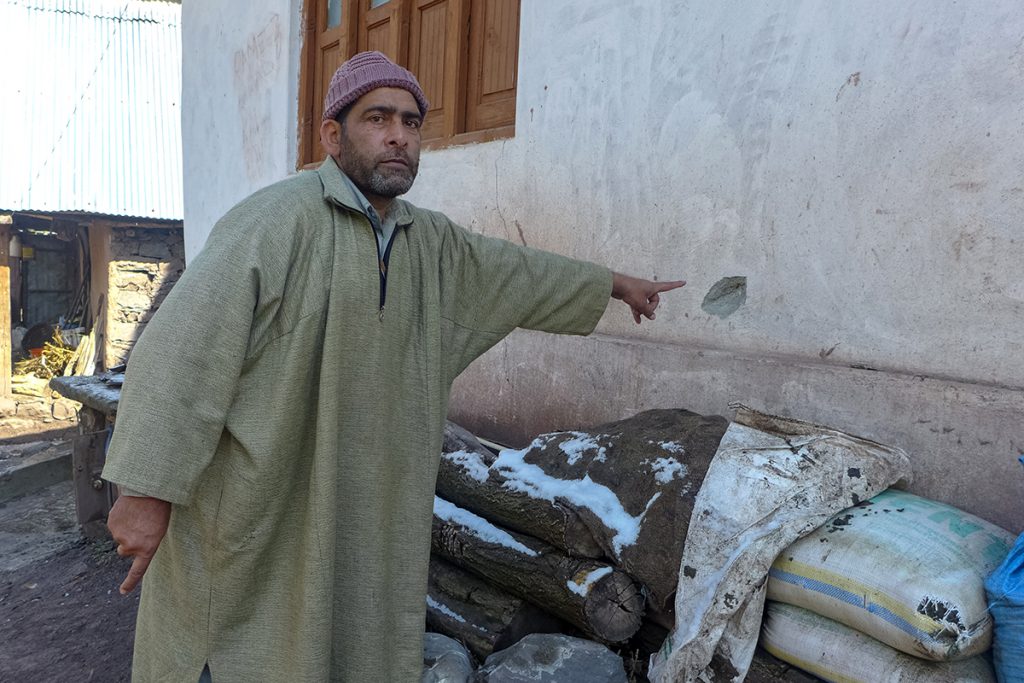 Abdul Rahim points to a mark in his home in the village of Balkote made by artillery fired into Indian-administered Kashmir by the Pakistani military.

Along the Line of Control, people who live there say violent attacks by India and Pakistan have increased. But even prior to the Feb. 14 bombing, the number of ceasefire violations and cross-border firings were on the rise. They more than doubled from 2016-2017 and again from 2017-18, totaling 2,140 violations in 2018 alone, according to India’s Ministry of Home Affairs.

In 2018, 29 civilians were killed in Indian-administered Kashmir during cross-border shelling or artillery fire, all of which is often aimed at military bases. A comparative number for deaths on the Pakistani side could not be found. 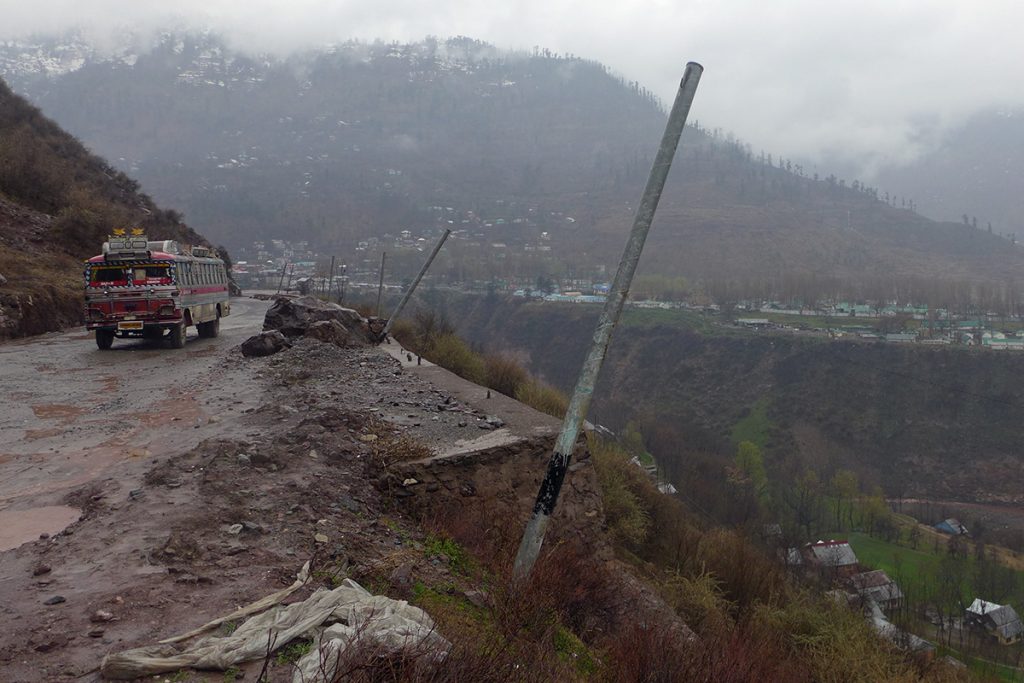 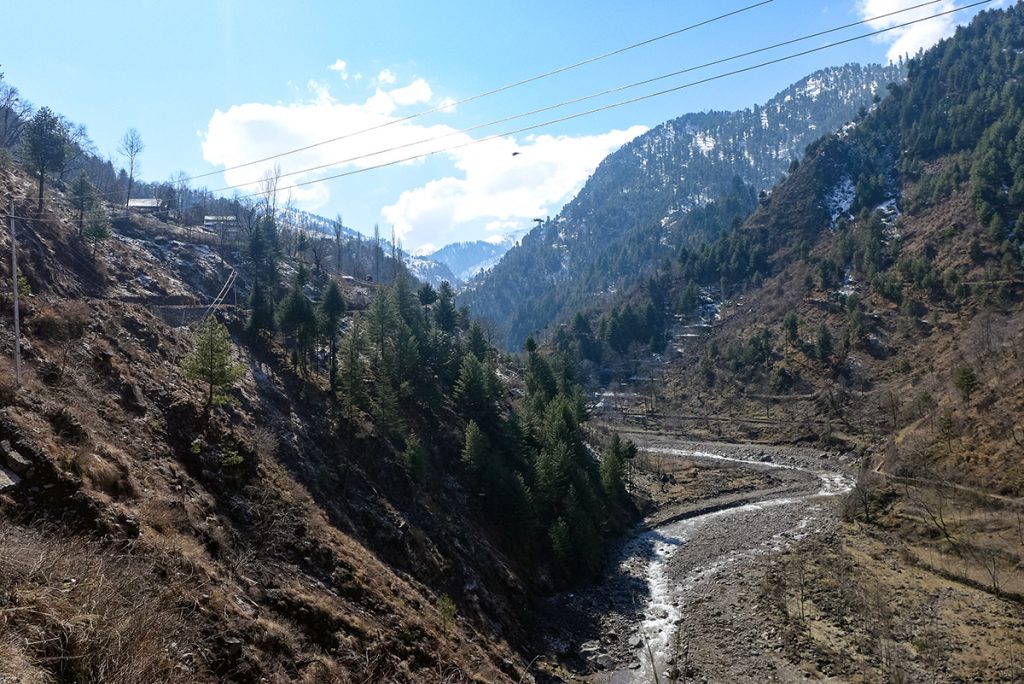 The area just east of the Line of Control is under Indian control, but people who live here say the line divides not just this rural region, but communities who once freely moved throughout it.

The Line of Control hasn’t always been a violent area. In 2005, a checkpoint was opened to allow buses to bring people up to the line and let them off to walk across it. Villages and families were separated there when the line was originally established.

“It was like there was an iron curtain, then a little window opened up,” says Pawan Bali, a conflict resolution expert with experience in India-Pakistan issues.

But permits are required to cross the border, and getting a permit is difficult. Between 10 and 15% of people who apply are granted one, Bali says.

The stories she heard from people living there are fraught with uncertainty and terror. They live in a war zone. 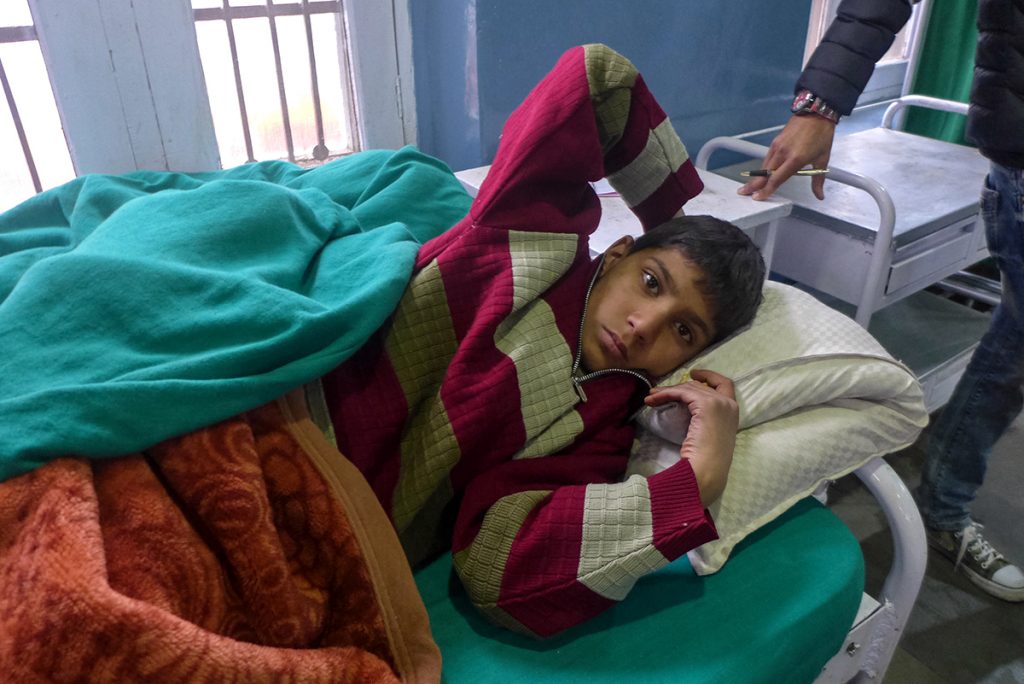 Mohammad Shabbir, 8, lies in a hospital bed after suffering injuries when the Pakistani military fired across the Line of Control, into Indian-administered Kashmir. Both India and Pakistan have repeatedly fired across the line, sometimes damaging homes and killing people on either side.

Hussain, the man whose wife and two sons were injured when their village, Batar Jabda, was shelled, says attacks are so common now that he’s lost count. He lives in a hilly section of the village, where cars can’t easily go. When his wife and sons were injured, neighbors carried them to get medical help.

“I was helplessly watching blood oozing out of my family,” Hussain says.

Hussain’s oldest son, 16-year-old Mohammad Ansuf, suffered injuries to his head and abdomen. His youngest son, 8-year-old Mohammad Shabbir, injured his leg and his wife, Parveena Begum, has wounds on her back.

“We can’t even breathe properly and live in continuous fear,” he says.

Hussain says his brother’s son and neighbor were also injured in the same incident.

“This is what war has done to us, and nobody cares,” he says. 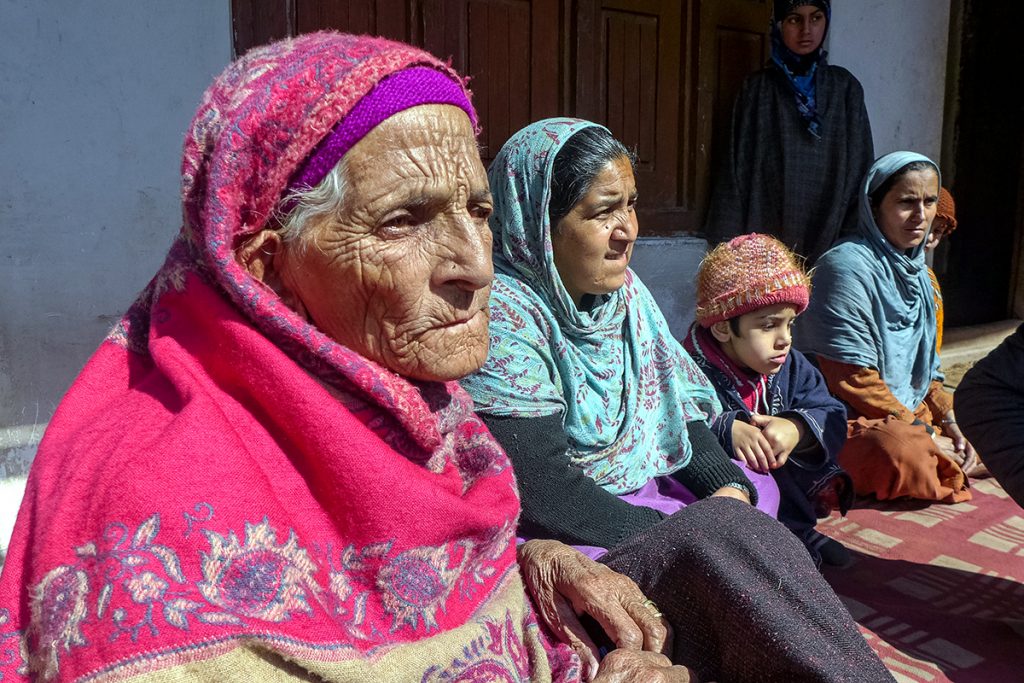 From left, Zooni Begum, Mehmooda Begum, Arfa Farooq and Afroza Begum sit outside their home in the Uri area, near the Line of Control.

It’s a far cry from what Indian leaders say they’re doing to protect people who live on or near the Line of Control. During a Ministry of Home Affairs meeting on March 13, one of the ministers of state discussed having shifted people who live near the line to safer places, and providing them with water, electricity, medical care and other necessities. Lawmakers also stated that the government sanctioned the construction of more than 14,400 bunkers, as well as compensation of 500,000 rupees (about $7,309) to people who have been caught in the crossfire.

Hussain says there are no bunkers.

“These bunkers could be a lifesaving place for us, but no one cares for our lives,” he says.

Across the board, people describe losses for which they doubt they’ll be compensated.

Abdul Rahim lives with his family in the village of Balkote, where there are about 700 households. He says homes there are frequently damaged by mortar shells. It’s common for livestock to be killed in the attacks, he says.

“We are always on the run,” he says. “Whenever we hear a sound, we are ready to run for life. It is so difficult to carry children and then run away.” 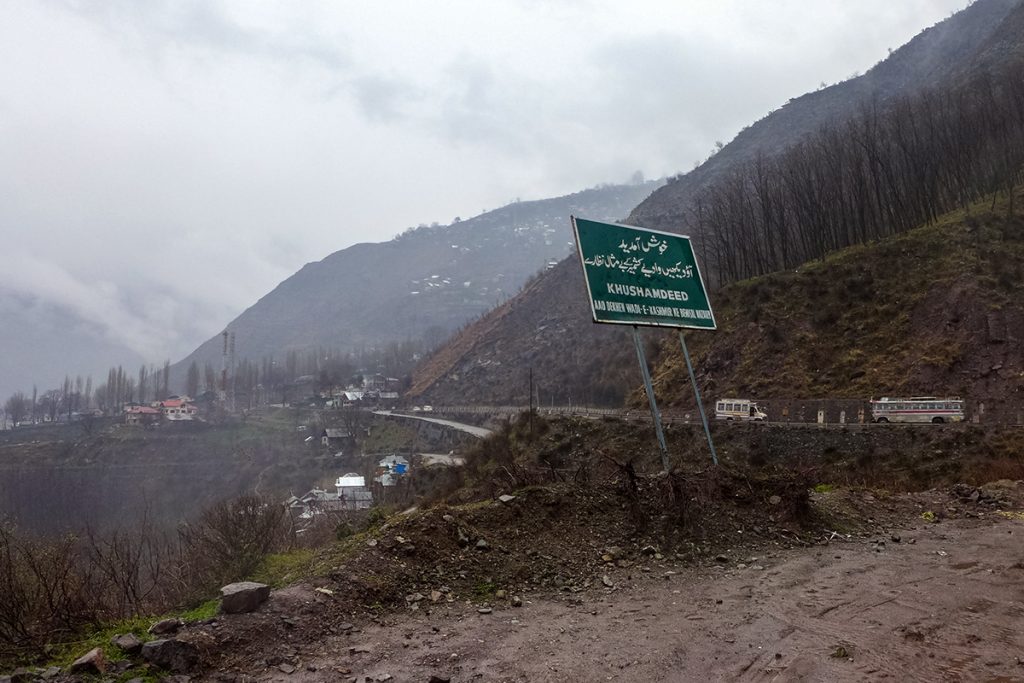 A sign welcomes visitors to the town of Uri, urging them to “Come and see the beautiful views of Kashmir Valley.”

Bali, the conflict resolution expert, says these same communities are always caught in the literal crossfire whenever problems occur at the border.

“These are the voices you never get to hear, yet these are the people who are affected most by the political tensions,” she says.

In the village of Silikote, which abuts the Line of Control and is home to about 20 households, Farooq Ahmed says he feels he could die at any moment.

“We witness small wars every day,” he says. “We have no guarantee of our lives, and nobody cares about us.”