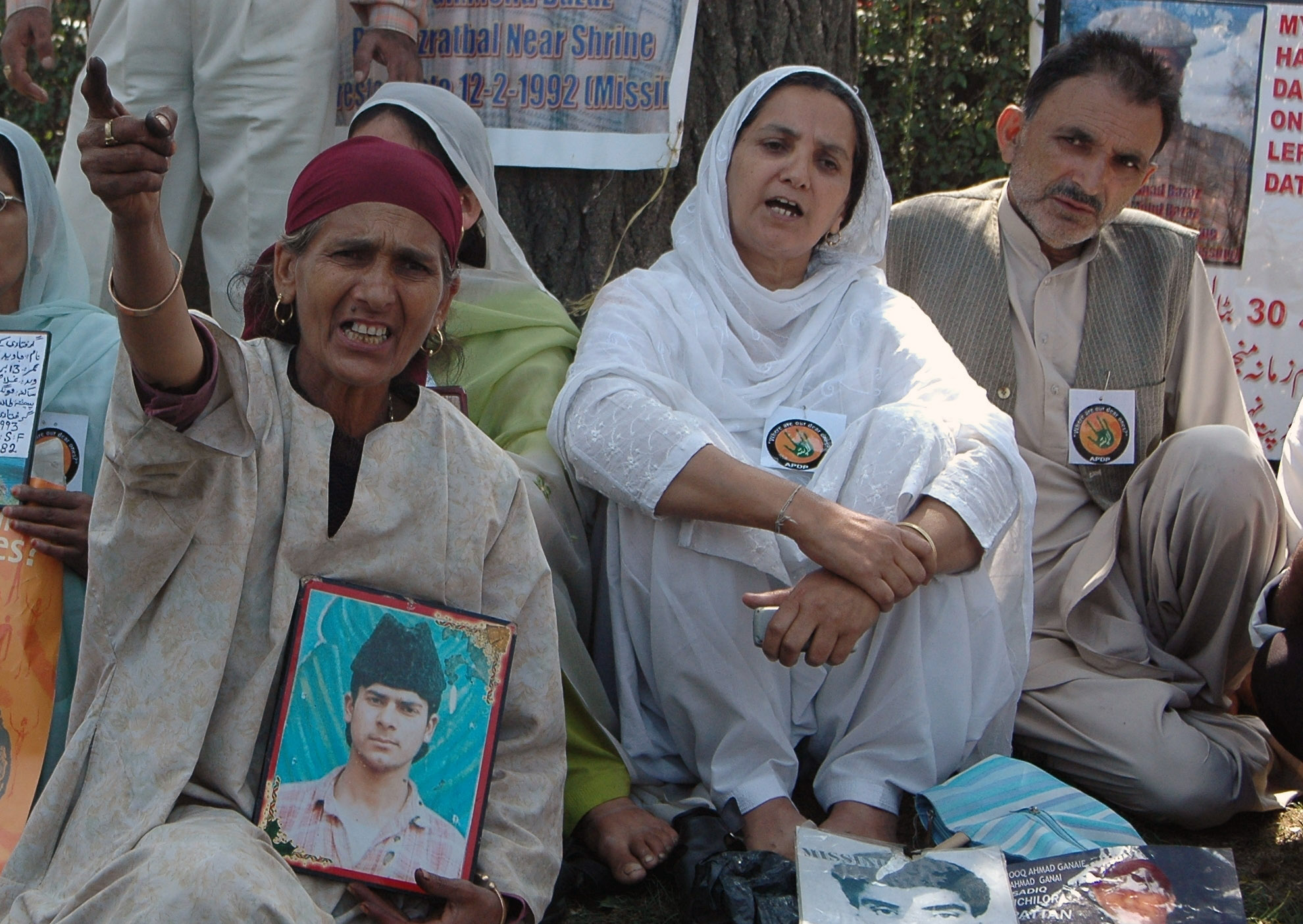 SRINAGAR, INDIAN-ADMINISTERED KASHMIR – As night falls in Srinagar, the capital of the northernmost state of the disputed Jammu and Kashmir, Parveena Ahangar begins to grow restless again. Her son is still missing.

She still thinks of the clothes he wore the last time she saw him. She thinks of the night someone rushed in to tell her that Indian troops picked up her son, who was asleep at his uncle’s house. He was 16. That was 19 years ago.

Today, Ahangar, 49, is still waiting for her son to reappear.

This stocky mother of five is one of thousands of mothers who have suffered the disappearance of children and family members in the two-decade armed conflict. An armed insurgency against Indian rule broke out in Indian administered Kashmir in 1989.

But unlike so many of those mothers, Ahangar is still fighting on behalf of her missing son and for all of the families who have had members disappear. “It is no longer the fight for my son. It is fight for all the disappeared. They are all my sons,” says Ahangar, the Chairperson of the Association of Parents of the Disappeared Kashmir (APDP) an organization she founded in 1994 to bring families of the disappeared together.

Divided between India and Pakistan, Kashmir is claimed by both countries. Three wars have been fought in attempt to control it, after India gained independence from Britain and subsequent partition in 1947. An armed insurgency against India broke out in the Indian portion of Kashmir in 1989, where anti-India sentiment still runs deep.

Today, decades after fighting began, Kashmiri separatists and human rights groups say more than 80,000 people have been killed in the 20 years since the conflict began. Ahangar's APDP estimates that at least 10,000 were missing after being picked up by security agencies, and have never been accounted for. Ahangar has traveled the world on behalf of the disappeared in Kashmir. She has found that most of the world remains unaware of this problem.

Nearly 20 years later, Ahangar is still searching for her son. She has searched jailhouses and sought legal action. The state of Kashmir, in its unstable middle ground, is not able to offer any assistance. Ahangar calls her pain a malady with no cure. The relatives of people killed, she said, at least had a last glimpse of their children and have gravesites to pour their grief into. The families of the captured know the jails where their kin are kept. But the relatives of the disappeared have nowhere to go. Not even a graveyard, she lamented.

For many years, APDP has been the only organization chronicling disappearances in Kashmir. On August 26, 2009 the government revealed its own tally of the disappeared — 3,429 are confirmed missing between 1990 and 1999. No formal tally exists for the last 10 years.

Ahangar’s determination to give a voice to the missing turned her from a semi-literate homemaker to an international activist for the parents of missing children. She represented APDP at the Asian Federation Against Involuntary Disappearances in the Philippines in 2000 and has traveled to many continents attending seminars, conferences and workshops.

“We are not alone and it feels good when people listen to you. At such meetings we share our stories, our grief and give each other courage. It helps us to fight on,” she says.

In the Philippines she saw a statue erected in a church in the memory of the missing. Upon her return, the APDP tried to set up a memorial in Srinagar — a marble plaque with the names of the disappeared — near the region’s main martyr’s graveyard in Iddgah. But Ahangar said police demolished the stone with names of three children born after their fathers went missing. Ahangar and an associate were charged with trespassing. “There is no place where people like me can go to unburden our grief when we are missing our children,” she says of the destroyed memorial.

Still, the APDP remains persistent and insists that the world needs to know what is happening in Kashmir. Even in India, she says, people are unaware of the political situation in Kashmir, let alone the issue of disappeared people.

On the night her son was kidnapped, Ahangar assumed he would be released in a day or two. “He was a student and had no links with militants, so I had no reason to think otherwise,” she recalled. The next morning she visited an army camp, looking for her son. “It was a case of mistaken identity,” she said. She told officials they got the wrong man, claiming a neighbor, Javeed Bhat, did have militant links and must be the young man they were looking for.

Over the next months, which dragged on into years, Ahangar visited almost every camp in the state searching for her son. Sometimes she would hear of an unidentified young man in jail and rush to check. “They would say, there is a boy in this jail and his parents have not come for him. I would go and check,” she recalled. But she never found the young man she sought.

Ahangar has tried to take legal actions. She filed a case in 1991, in Jammu, her local region, and with the Kashmiri High Court seeking her son’s whereabouts.

“I knew who had taken my child. I took them to court, but the judge was helpless,” she says. Ahangar's case never advanced in the legal system, due in part to a special law called Armed Forces Special Powers Act, which grants immunity to Indian armed forced fighting in Kashmir. Any requests sent to the Indian home ministry for criminal prosecution of accused army men are almost always rejected.

For Ahangar, the search will go on. Despite the fact that she has not yet found her son, she has won many small victories. Before the APDP was founded, most parents of the disappeared were fighting their battles separately. Their voices were lost in the din of conflict.

Now the force of their unified cries are heard and felt.

“Return our children if they are alive! If they are dead, give us the bodies,” the APDP members chant in unison as they sit in protest in a Srinagar park every month, reminding the state of their demands.

This article was created in partnership with Voices of Our Future.