‘Machete wielders’ are terrorizing Uganda. But why?

Some suspect politics behind the brutal and baffling attacks.

LWENGO  UGANDA, — Walking to work one morning last year, Monday Semwanga noticed a large, slightly wet piece of white paper on the side of the road. He looked closer — it was a letter written in the Luganda language. The author, he says, claimed to be a “rebel” who “threatened to cut off anyone’s head who tried to stand in their way” of toppling the government. Semwanga panicked — the cryptic warning was a hallmark of the “machete wielders.”

Machete wielders, according to police, are gangs of young men named for their weapon of choice. From 2016 to 2018, authorities say, the groups carried out a spate of killings and assaults in Uganda’s Greater Masaka region, a swath of coffee and matooke banana farms about 160 kilometers (100 miles) south of Kampala, the capital. Last year, the machete wielders returned, police say, killing 30 people and injuring dozens more.

Even more chilling, the motive for the attacks is shrouded in mystery. Attacks were often preceded by letters like the one Semwanga found; some even named eventual targets. However, residents aren’t sure why certain people were slain. Many were elderly and lived alone; police say there was rarely evidence of, for instance, a robbery gone wrong. “We don’t know who is killing them, where they came from and who sends them,” says Mathias Mpuuga, a local member of Parliament.

Uganda’s legacy of state violence and penchant for secrecy have seeded rumors and doubt. Police made dozens of arrests in both crime sprees but have provided little public explanation. Are the machete wielders hired killers? Do they have political motivations? Villagers don’t know. While two suspects in last year’s killings are opposition members of Parliament, some have derided their arrests as political theater. (Uganda Police Force spokesman Fred Enanga declined to comment on the cases as they continue to move through the legal system.)

Meanwhile, villagers rallied to protect themselves. After reading the letter, Semwanga, 49, alerted police, but the shop owner also bought a spear and a machete to defend his wife and three children. Days later, he says, an older man in his community was killed — a presumed casualty of a machete gang.

Stretching across eight districts of mostly farming villages in south-central Uganda, the Greater Masaka region is home to more than 1 million people and the vast Lwera swamp near Lake Victoria, Africa’s largest lake. With only one city of size — Masaka City — the region is generally considered safer than urban Kampala. Yet in 2016, the machete wielders arrived. According to police, the attackers lingered outside homes and called for help; if someone opened the door, they pounced. They stole money and phones, but not always — sometimes they solely raped and bloodied residents.

By 2018, the attacks subsided, leaving close to 30 people dead. Authorities rounded up around 150 suspects; dozens ended up behind bars. Local lawmakers demanded that the central government investigate what prompted the bloodshed. Officials vowed to, says Florence Namayanja, the mayor of Masaka City and a former member of Parliament, but they never issued a report. “What is more worrisome is the fact that the motive of the killers isn’t known, so we don’t know what we are dealing with, what they want, so we can address their issues,” says Namayanja, a member of the National Unity Platform. 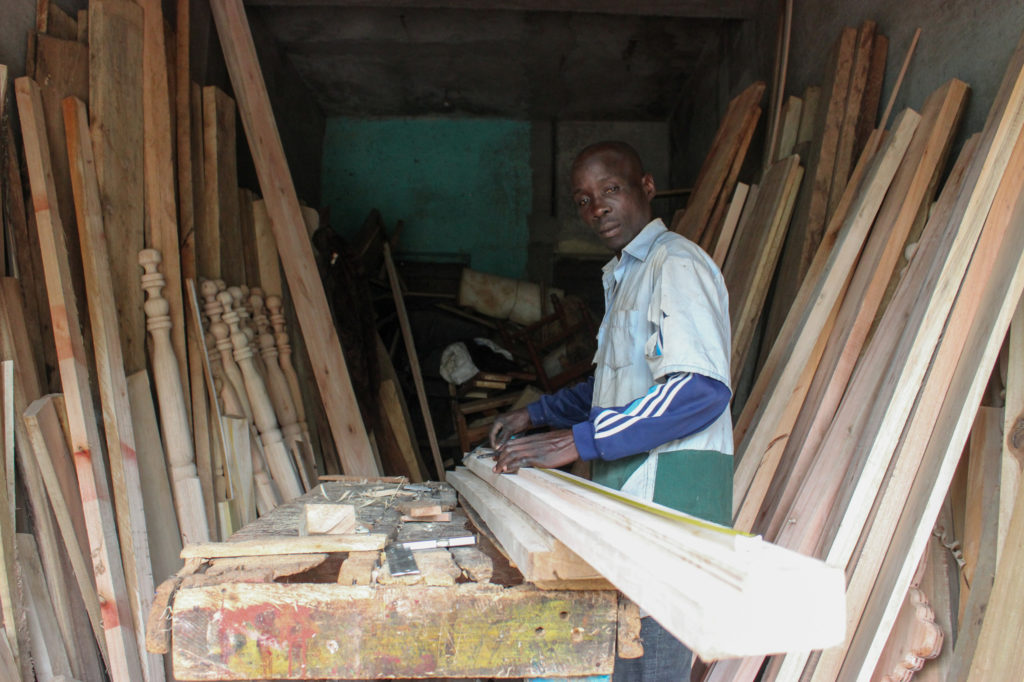 Carpenter Matovu Vincent stands in his workshop in Masaka City, Uganda. Last year, a man crept up behind him and struck him on the head with a machete. “This leaves me worried, not knowing why I was attacked and then left to live,” he says.

Greater Masaka is a stronghold for two opposition parties, the National Unity Platform and the Democratic Party, in a country where the National Resistance Movement has held power for decades. In the absence of a report, opposition leaders suspect that politics somehow fueled the attacks, stifled the government response or both. Otherwise, says Mpuuga, a National Unity Platform member, “we would have had a report explaining all the previous killings; but we have waited for years, and nothing has been given to the public.”

Asked to respond, Rogers Mulindwa, a National Resistance Movement party spokesperson, says, “The Masaka killings are an issue of security, and at the moment, it’s in the courts of law, so I can’t comment about it.”

The assaults might have faded into a historical footnote — but last year, they started anew. Around sunset one day, Matovu Vincent, 38, was walking in a residential neighborhood in Masaka City. He sensed someone behind him; suddenly, a man whacked his head with a machete. Matovu blacked out and awoke on the ground hours later. (Like some Ugandans, he puts his surname first.) “My attacker never took my phone or money, so I wondered why he hit me,” he says. “This leaves me worried, not knowing why I was attacked and then left to live.”

In July and August 2021, about 30 people were killed and 50 injured, police say. Based on the assailants’ tactics, police blamed the machete wielders. Across Greater Masaka, residents trembled. With the earlier attacks haunting their thoughts, some people moved away, while others fortified their homes for potential battle.

One morning, Sebunya Stephen got a frantic call from the daughter of his 81-year-old neighbor. A man had rung her from her father’s phone, saying he was dead. Sebunya, 52, lives in the village of Bisanja; he uses his surname first. He rushed to the neighbor’s home and found his bloodied body on the living room floor, covered with a blanket. Nothing had been stolen. “I think creating fear in us is the major reason for the attacks,” Sebunya says. “And indeed, I live in fear not knowing if it will be my house they break into and attack me and my family.”

Afterward, Sebunya installed a new lock on his door and bought a machete. He also joined a group of men who patrolled the village with flashlights and sticks from 8 p.m. to 5 a.m. every night. Their aim was to supplement the police patrols that circled Bisanja only once or twice a week. They looked for men they didn’t recognize, a rarity in the village after sunset. He says the patrols led to several arrests.

Soon, the attacks ceased and the citizen patrols disbanded. Uganda police attribute this to a slew of arrests of mostly men in their 20s and 30s. Two suspects are members of Parliament who belong to National Unity Platform. Ssegirinya Muhammad and Ssewanyana Allan, says Enanga, the police spokesman, helped fund the attacks “to cause fear in the population and cause people to hate the government.” 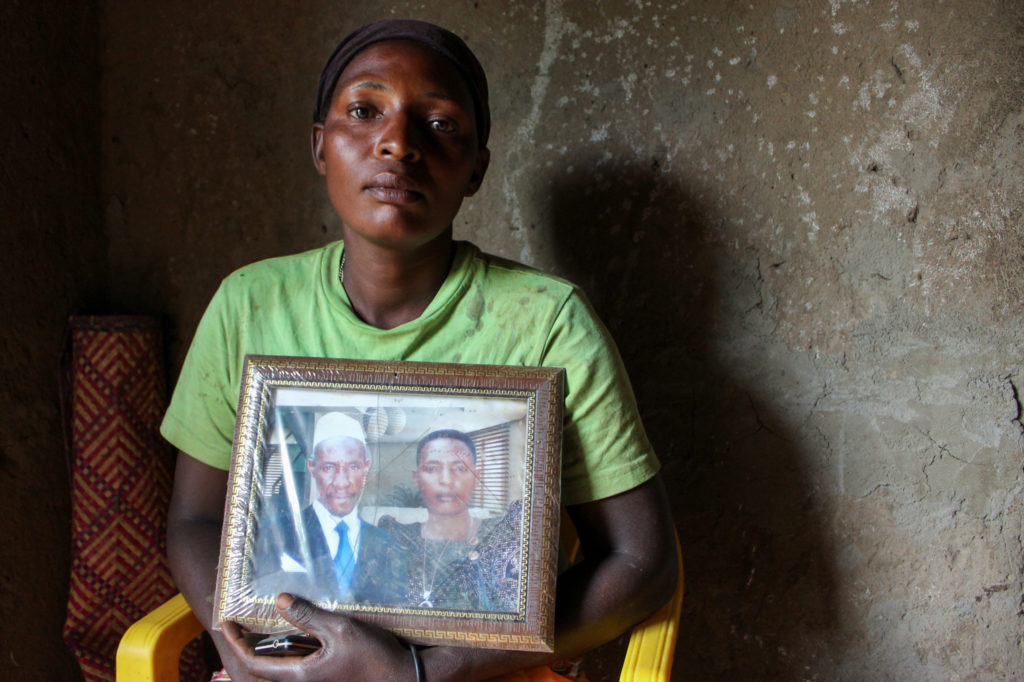 Adrian Atuhairwe holds a photo of her late husband, Lubega Ramathan. Authorities say his death in August was the work of machete gangs that terrorized the Greater Masaka region in south-central Uganda.

On Twitter, the National Unity Platform denounced the arrests as political: “Innocent lives of Ugandans have been lost … and the regime has decided to politick. Citizens, we are on our own!” In September, the lawmakers were released from jail, only to be arrested again; party members protested by boycotting parliamentary activities for a week. “Tying the attacks and killings on opposition leaders will not resolve the security problems in the Greater Masaka region,” says Mpuuga, the National Unity Platform lawmaker.

Many residents are equally skeptical. Isaac Mulindwa, 32, lives in the village of Kamazi. A man named Lubega Ramathan was found dead in Mulindwa’s garden — a victim, police say, of machete wielders. “Why would you kill, terrorize the very region that voted for you? To me, this is a political game that is being played by government,” Mulindwa says. His suspicions stem, in part, from the official silence regarding the first set of attacks. “Everything doesn’t add up or make sense.”

Adrian Atuhairwe, 37, is Lubega’s widow. (He used his surname first.) She and her husband, a 45-year-old banana farmer, were raising two children together. On Aug. 10, Atuhairwe realized he hadn’t returned home from visiting friends the night before. “It was out of his character to spend a night anywhere without telling me,” she says. “After failing to locate him for two days, I feared he could be in danger.”

When authorities found her husband, he had what appeared to be machete slashes on his head, neck and back. Atuhairwe has no idea why he was ambushed — to her knowledge, he had no enemies and didn’t receive a warning letter. “I wonder why he was killed and his body dumped in the nearby garden,” she says. She’s not sure she’ll ever get an answer.