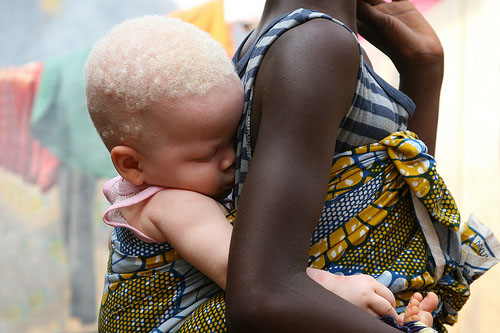 KAMPALA, UGANDA – In 2007, the number of Ugandan children with albinism who were kidnapped, killed and dismembered in Uganda began to rise.

In many countries throughout Africa, including Uganda, the legs, hands, arms and hair of children with albinism are used by witch doctors to make high-priced potions said to increase wealth and prosperity. Violence and discrimination among people with albinism in eastern Africa is endless: It is widely believed that sex with a person with albinism will cure HIV – resulting in a high rate of rape among women with albinism here. Parents who give birth to babies with albinism frequently abandon them. And adults with albinism suffer from continuous threats, and social and employment discrimination.

As more and more people with albinism suffered at the hands of local witch doctors and kidnappers, three students with albinism at Makerere University in Kampala, Uganda’s capital city, formed the Uganda Albinos Association, UAA, in 2007, in hopes of raising awareness of the human rights atrocities faced by the community. Today, the group has more than 400 members and is recognized nationwide as one of the premier organizations fighting for the rights of people with albinism. “We mainly face intimidation from sorcerers,” says Judah Ssebyanzi. He says the threats are so severe that, “We do not follow up on cases of missing persons for our own security,” says Ssebyanzi, one of the founders of the UAA.

Worldwide, the chance of being born with albinism – a condition defined by the complete absence of pigment in the skin, hair and eyes – is 1 in 20,000. In Africa, albinism is much more common as 1 in 4,000 people here are born with the pigment disorder. People with albinism typically suffer from vision problems and the rate of skin cancer is high. But in Africa, the greatest danger is kidnapping and death by dismemberment so their parts can be used by local witch doctors.

The Uganda Albino Association, UAA, has grown in power and prominence over the last three years and is now well-funded and creating programs to help disseminate public information about albinism, council parents of infants, increase job placement and even help get people with albinism elected to parliament.

For years, people with albinism in Uganda and east Africa have been silent and endured the stigma surrounding their unique appearance. Media reports in 2008 and 2009 were awash with reports of mass killings for their body parts. East Africa, like many parts of Africa, is rife with superstitious beliefs. Witchdoctors build on this superstition for selfish gains. It is believed that the use of their body parts in potions brings great wealth, so they fetch a high price on the black market. While Uganda does not have the highest rate of murders, neighboring Tanzania has the world’s highest murder rate of people with albinism. Ssebyanzi says the dealers have spread “their net” into Uganda, leaving the UAA with plenty to worry about.

While the association works closely with the police, for example, when planning demonstrations, little is done to search for a persecute those who threaten the albinism community. In recent years the UAA has grown and now received funding from membership subscriptions, organizations in the United States, Amnesty International, Horn of Africa Human Rights Defenders and Action on Disability among others. But still, the threats continue.

“I live in Najjanakumbi. When I am travelling [to the] Shoprite Store, there is a boda-boda stage nearby and each time the cyclists see me, they say, ‘Look at our money moving. When can we get it?’” Ssebyanzi says. “Such derogatory comments are common and show the belief people have in the fact that albino parts bring wealth.”

The UAA aims to fight this kind of discrimination from an early age. In many homes, the birth of a child with albinism is a source of shame and discomfort. Family members believe the home has been cursed and fathers often deny paternity and even abandon the home.

Ssebyanzi says the UAA is targeting parents with young children for their next project. “We are planning a health project next year targeting mothers and the shock they face when they give birth to an albino child. We intend to provide counseling services to parents and the family,” he says.

But sensitization among family members is not enough Ssebyanzi says. The UAA was formed in order to increase access to information and correct misconceptions about people with albinism. But still, the threats continue. Ssebyanzi says when the UAA was formed he received many anonymous threats from people who told him the UAA was interfering in their lucrative business – killing and dismembering people with albinism.

“We are afraid of sorcerers who use our body parts for sacrificial purposes,” he admits. “A famous [witchdoctor] called Mama Fina threatened to harm us.” Mama Fina has admitted to using albino body parts but says she is not involved in the kidnapping or killing. She declined to be interviewed for this article.

In addition to threats on their lives, people with albinism also face numerous kinds of discrimination. For the college students and members of the UAA, job discrimination is among the most problematic. “Our members face discrimination in the job market, they are passed over for opportunities,” Ssebyanzi says. “For example, one of our members worked with a leading beverage company and when a new opening was advertised he applied. In the face-to-face interview he was told he would not fit the job advertised.”

The UAA is in the process of working with a local microfinance institution to start a series of small businesses to employ its members directly.

But Ssebyanzi says little change is possible without representation at the highest level.

When awarding winning international singer, Salif Keita, commonly referred to as the Golden Voice of Africa, performed in Kampala last month, he called a group of Ugandan young people with albinism to the stage. He dedicated the song, “These are my people” to them and their efforts for greater representation.

This fall, Ssebyanzy and the UAA presented a petition to the deputy speaker of Parliament, demanding a representative. Ssebyanzyi says people with albinism in Uganda are not adequately represented. As Uganda prepares to hold its presidential and general elections next year, the UAA is pushing for a representative with albinism. “We face many challenges yet non-albinos do not understand what we go through. They are the ones who formulate the policies we abide by. It is high time we became part of those who formulate the policies,” Ssebyanzi says.