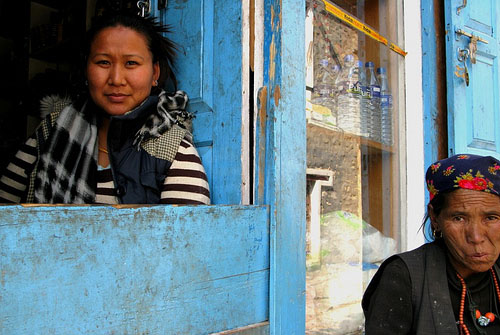 LALTIPUR, NEPAL -- Near the busy junction of Jawalakhel in Lalitpur, a district that borders Nepal’s capital, Kathmandu, there are a half a dozen old houses on both sides of the main road where people gather each morning, as if it were a busy marketplace.

But it isn’t a market. It is a Tibetan refugee camp where old men with wrinkled faces, cheerful children and mothers and their babies have lived together for four generations.

Sunam Doma has lived in a room in one of the old houses at the Jawalakhel junction for 51 years. “Four of generations of my family were confined in this camp,” Doma says. “We are neither of Nepal nor of Tibet. I will die as a refugee.”

At 80, Doma’s face is an intricate map of wrinkles. Her body is stiff. Her eyes are full of desire and dissatisfaction.  She says these days she just spends her time praying and waiting. “I am just waiting to leave this world,” she says.

Doma grew up in a village in Tibet. She says she will never forget fleeing her home at night with her two children when she was 30-years-old. From that day on, she has been a refugee living in Nepal. She and her husband crossed into Nepal in the Mustang district in 1959, after the Chinese military cracked down on Tibetan rebels. As resistance spread throughout Tibet in 1959, the Dalai Lama fled to India, many others sought refuge in Nepal.

Doma says she was sad to leave her home, where her family owned some 400 cattle and land of their own. When she fled with her husband, son and daughter, she says that was just the beginning of what became a life of hardship. “We had nothing to eat for days in Mustang. We survived on wild fruits and roots,” she recalls.

Like Doma, scores of Tibetans entered Nepal through Rasuwa, Solukhumbu, Dolpa, Lomanthang, Mustang and other Himalayan districts. According to the data available at Nepal’s Home Ministry, 12,500 Tibetan refugees have been staying in various camps here for five decades. However, the United Nations High Commission for Refugees, UNHCR, reports that there are more than 20,000 Tibetan refugees living in Nepal. Basanta Raj Bhattarai, under secretary at the Home Ministry, says the UNHCR data could be genuine as the ministry did not collect the data officially until the 1970s.

As the fourth generation of refugees grows up in the same houses built by UNHCR on land purchased by the International Red Cross in 1960, many say they are struggling to preserve their traditions in a foreign land. What’s more, the men and women of the camps cannot find work amidst a flurry of legal and citizenship issues. Most of the 20,000 Tibetan refugees here have no defined legal status. Those who entered Nepal before 1990 still do not possess refugee cards and their movements are restricted to certain areas of the country. Any Tibetan who arrived after 1990 is considered illegal, with no right to remain in Nepal. And as China exerts a heavier economic influence on Nepal, many Tibetans say their ability to speak up about their rights and living conditions has worsened.

The refugees who have called the rustic houses built by UNHCR in 1960 home for the last 50 years say they have done their best to bring traditional craft and culture to the camp. They have woven traditional carpets and painted their traditional artwork. Most important to the older generations though, is that the story of their people is not lost.

Thinlay Gyastso, a Tibetan welfare officer who himself fled to Nepal when he was just 3-years-old, says Tibetans tradition and culture is hard to preserve here. He says he will ensure that his children and grandchildren know the story of the Dalai Lama and the Tibetan people. “The Tibetans tried to defend [their land] and scores were killed. They were compelled to take refuge in Nepal and India as [we] could not stand against the armed force of China,” Gyastso says. “We came here for the protection of our language, culture and religion. We still want [an] autonomous Tibet.”

Thirty-two-year-old Penpa, who was born in the refugee camp in Nepal, wears dirty pants and a dirty shirt. He looks dejected and spends his days wandering the streets near the camp. He does not have a refugee identity card or any other documents to establish his identity. Penpa, who dropped out of school in grade eight, says he has been searching for a job for years, but cannot find one because he lacks a citizenship certificate or an identity card. “I wanted to go abroad to work, but could not go due to the lack of an RC (refugee card),” he says. “We need citizenship here to get work. I have no idea what to do next.”

The Home Ministry provided refugee cards to Tibetan refugees who entered Nepal before 1990. But the government has since imposed a ban on issuing refugee cards. While the government has provided more than 76,000 refugee cards to Bhutanese refugees, it has not issued cards to Tibetans since 1990, according to data from the UNHCR. “The refugees have problems to study higher education, go abroad and conduct businesses due to the lack of RC. The young generation is losing enthusiasm and hopes and face hardship,” Gyastso says.

Under secretary Bhattarai admits that there has been a significant delay in providing refugee cards to Tibetans in Nepal, but blames the unstable political situation in Nepal. “We are preparing to provide identity cards soon in coordination with UNHCR,” he says.

But Nepal is not an ideal place of refuge for other reasons, besides their own tumultuous political atmosphere. Nepal is not a signatory to the 1951 Convention or the 1967 Protocol on the Status of Refugees. There are no laws here or applicable national legislation that relate to either asylum-seekers or refuges. Tibetan refugees who arrived in Nepal after 1990 are only allowed to use Nepal as a passage to a third country, like India. Though recently, even that has proven difficult.

Stephane Jacquemet, who became the Nepal’s representative to UNHCR in January, says while the government of Nepal does provide shelter on humanitarian grounds, the UNHCR is actively working to acquire transit permits so that Tibetans who arrived in Nepal after 1990 can be settled in other countries. “UNHCR has been responsibly working for the inspection regarding the resettlement and sending the refugees to other countries safely,” Jacquemet says.

Still others are looking for additional ways to remain in Nepal – the country that offers the closest access to visit relatives in Tibet. Dhundup, a 64-year-old refugee who identifies himself by only one name, says many Tibetans have tried to marry Nepali men and women to attain their citizenship cards to disastrous effects. Dhundup, an elder in the camp here,  came to Nepal with his father when he was 13. He says many male refugees have left their Nepali wives and children after the government would still not issue a citizenship card. “The female refugees married to Nepalis are ill-treated for being the refugees,” he says.

While the Nepalese Citizen Act of 2006 should theoretically give Tibetans married to Nepali people the right to a citizenship card, if they renounce their previous citizenship, the government here has maintained that Tibetans, especially those who arrived after 1990, have no legal right to be in the country regardless of marriage.

But as China exerts greater influence here the reality of citizenship, refugee status or even safe passage through Nepal have become even more unlikely.

In December of 2009, Nepal’s new interim government reached a cooperation pledge with China that has increased China’s annual financial assistance to Nepal to approximately 1.5 billion rupees. China has agreed to promote the export of Nepali products and will participate in key areas of infrastructure development including hydropower, tourism and agro-based industries. What’s more China has pledged tariff reductions, agricultural trainings and other strategies to aid in poverty relief.

However, a key part of the agreement was Nepal’s agreement to promote the so-called “one-China policy,” that says Taiwan and Tibet are “inalienable parts of Chinese territory.” As a result of the agreement, Nepal has pledged to never allow anti-China activities on Nepali soil.

According to UNHCR, since this agreement went into effect Nepal has intensified patrolling along its border with China. In June, 33 Tibetans who crossed the border into Nepal were handed over to the Chinese government, thus breaking Nepal’s international agreement with UNHCR to allow Tibetans to cross through Nepal on their way to India.

“We are serious [about] the Tibetan refugees and we also don’t like to disrupt the diplomatic relations with China,” under secretary Bhattarai says of the situation.

On the ground, Tibetan refugees say they are worried about the future for their children in Nepal. “There has been uncertainty over the issue of their repatriation on the one hand and on the other the refugees are pushed into poverty as their sons and daughters are deprived of employment,” says Thinlay. Rights activist Shrestha says the refugees’ demands – employment and recognition, are genuine and should be considered.

Doma, Pempa and Dhundup all agree that life in Nepal has become nearly as bad as life back in Tibet. While they once sought refuge here, now they says they would be happier to live in their own land where they are at least able to work, rather than live in poverty without work or legal recognition. Though Doma says her chance to return to Tibet has passed, she hopes her younger kin will return one day. “I am dying but I wish my sons and grandsons will return to Tibet and live a dignified life there,” she says emotionally. “We wish nobody should live a life like that of refugee here.”