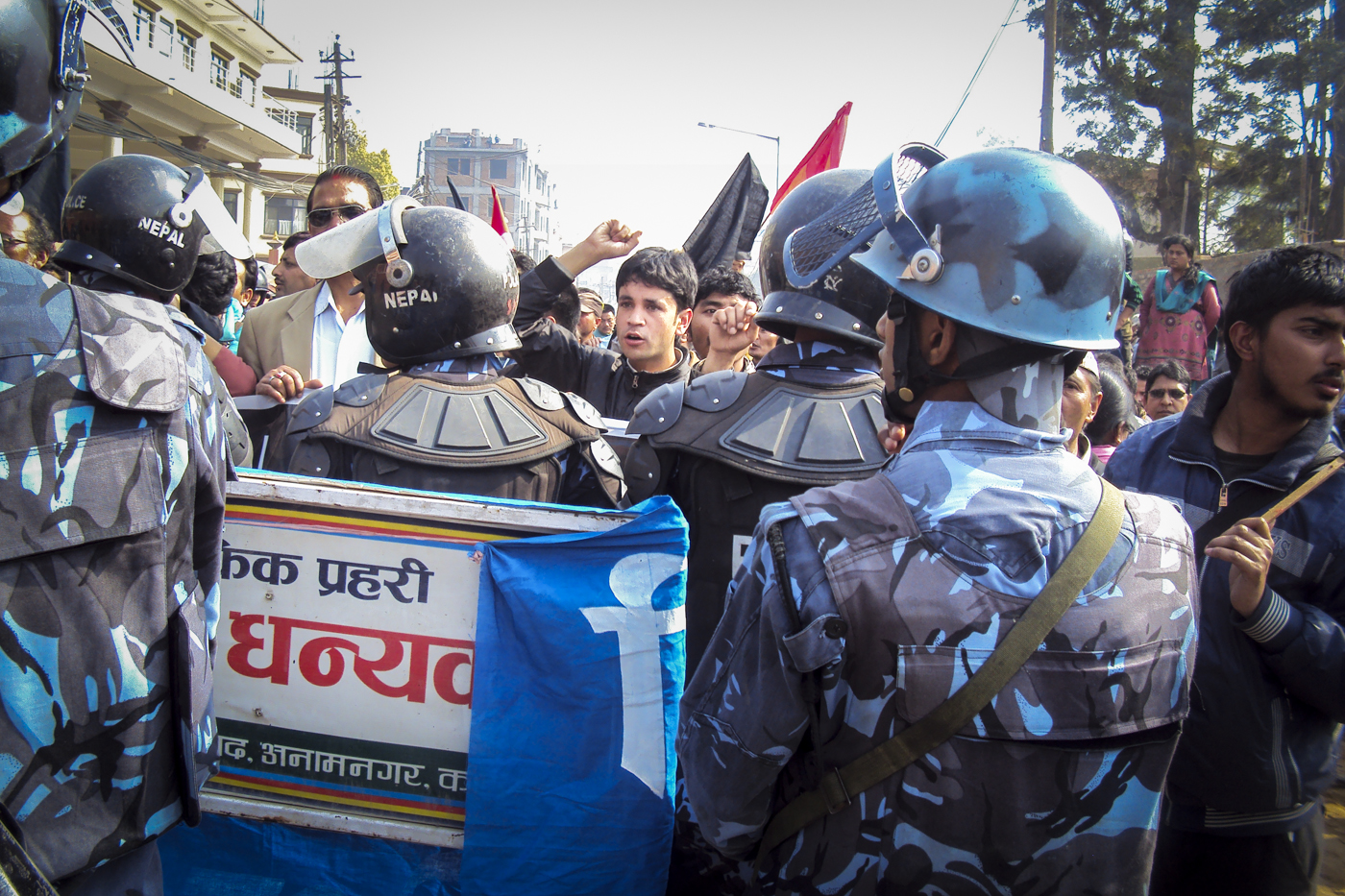 KATHMANDU, NEPAL – Ambika Khadka, 43, sells umbrellas, raincoats and clothes in Jamal, one of the busiest parts of Kathmandu, Nepal’s capital. But the city’s frequent political strikes hurt her business, she says.

“Within minutes, the busy thoroughfare becomes empty,” Khadka says. “The people carrying the flags of the political parties start giving speeches through the mics at hand. They burn the rubber tires and start shouting aloud. They forcefully shut down all the shops, and, in case of resistance, they vandalize around. How can we work in such situations?”

Khadka makes her entire living from her small sidewalk shop. She must provide for her three children and her parents-in-law, who all live with her.

“With no money at hand, I feel very sad when I cannot even serve the morning tea and snacks to my in-laws,” Khadka says.

Her family goes hungry for days when there is a strike, she says. The loss of income also makes it difficult for her to pay the rent and her children’s school fees. Financial pressure constantly weighs on her.

Economists and government leaders say the effects of political strikes hurt the country’s developing economy on both small and large scales. Strikes can wreak significant damage on workers’ and businesses’ earnings, and the poor often suffer the worst consequences. Law experts say the strikes compromise citizens' basic rights. But representatives of political parties respond that strikes will help citizens in the long term. Civil society, governmental officials and nonprofit organizations aim to end strikes by calling on political parties to seek more reasonable and less disruptive means to address demands.

Nepal’s political parties and their affiliates frequently call strikes to pressure the government to meet their demands.

Bishwambher Pyakuryal, former professor of economics at Tribhuvan University, blames political instability as the major cause of Nepal’s strike culture.

In 1990, a people’s movement restored Nepal’s multiparty democracy. Six years later, the Communist Party of Nepal (Maoist) began a civil war to create a people’s republic, as other groups demonstrated for democracy.

The public elected a Constituent Assembly in April 2008 to create a constitution for the country. The assembly soon declared Nepal a federal republic and a secular state. Although it passed an interim constitution, it struggled to pass a full constitution because of interparty fights on various national issues.

Finally, the Maoist-led government decided to dissolve the Constituent Assembly in May 2012 after its failure to pass a constitution. Since then, there has been increased disruption in law and order in Nepal, as well as strikes and closures.

Since the Constituent Assembly years, political parties and their affiliates have organized strikes frequently to pressure the government to fulfill their demands, Pyakuryal says. This established a political culture of strikes that is proving difficult to change, even as some charge it is disrupting the economy and hindering the country’s development.

“These days, strikes are called even over family disputes, social incidents and road accidents,” Pyakuryal says.

Strikes have hurt both small and large businesses in terms of sales, production, and imports and exports, says Hemanta Dabadi, director general of the Federation of Nepalese Chambers of Commerce and Industry, an umbrella organization that aims to promote businesses and industry in the Nepalese private sector. This results in huge economic losses.

One day’s strike causes losses of 20 billion rupees ($200 million) in the industrial sector alone, says Dabadi, who has his doctorate in economics.

Janmajaya Regmi, joint secretary and spokesman at the Ministry of Finance, says the strikes have contributed to slower economic growth than the ministry had predicted.

Both workers and business executives attest to losses in earnings because of the strikes.

Strikes are costing regular residents their livelihoods, says Daman Nath Dhungana, former speaker of the Constituent Assembly and a civil society activist. In Nepal, civil society refers to a segment of the population – including lawyers, professionals and independent journalists – that voluntarily works on issues affecting the public.

“Political parties in Nepal use strikes as tools to show off their strengths,” he says. “The strikes are taken as their growing power, the brunt of which is borne by the general citizens.”

“The strikes disproportionately harm poor people, who are more likely to miss a day’s pay,” he says. “The situation of the daily wage workers becomes appalling compared to those who have fixed salaries.”

Ganesh Nepali, 62, has worked for the past 20 years as a tailor in a clothing shop in Kathmandu.

“We are forced to close down the place from where we earn some money,” he says. “How can we make our ends meet?”

“These frequent strikes are making the poor even poorer,” he says. “If these strikes do not stop, we won’t be able to even physically survive, and we may starve.”

Niraj Baniya, 18, a college student and a sales clerk at a supermarket in Kathmandu, says that strikes make it difficult for him to pay his way through school. Baniya, who earns 5,000 rupees ($50) per month, suffers wage cuts for the days the store closes because of strikes.

“It is difficult to survive with the reduced salary,” he says.

Madhav Om Shrestha, executive director of the Hotel Association of Nepal, an organization representing the hospitality industry in the country, says in a phone interview that strikes have long-term adverse effects on the tourism industry.

“A single-day strike causes cancellation of booking of hotels for many days,” Shrestha says. “It is difficult to convince the tourists that peace and stability has and will be restored. The image of Nepal abroad has been tarnished, making the tourism industry vulnerable most of the times.”

The effects of strikes are not just economic.

Chandra Kanta Gyawali, a lawyer and constitutional expert, says in a phone interview that the strikes compromise the fundamental rights of citizens.

“The Interim Constitution of Nepal ensures the rights of the citizens to peacefully protest without arms in a designated area,” Gyawali says. "However, it has prohibited strikes that affect the supply and distribution of essential goods and services such as water, hospitals, educational institutions and petroleum products. But the protesters disregard these rules and resort to strikes, mostly not peaceful.”

Bed Prasad Bhattarai serves as secretary of the National Human Rights Commission of Nepal, an independent and autonomous constitutional body. Some protesters physically abuse drivers on the roads and vandalize ambulances carrying sick or injured people, violating peoples’ freedom of mobility, he says. School closures deprive children of their right to education.

But Narayan Sharma, a politburo member of the Communist Party of Nepal (Maoist), says that strikes’ long-term benefits to the country are more important than losses in the short term.

“Although strikes affect the economy for some time, our demands are for the ultimate good of the general citizens,” he says. “Therefore, for long-term changes in the country’s economy, strikes become necessary. Strikes are organized to uplift the economy of the entire population.”

Madhav Dhungel is chairman of All Nepal National Free Student’s Union, a fraternal organization of the Communist Party of Nepal-Unified Marxist Leninist. His group organizes strikes to safeguard the rights of students and to protest rises in public transportation fares and the prices of petroleum products. People must strike because the government ignores less disruptive tactics, he says.

“Strike is not for pleasure but for compulsion,” Dhungel says. "As the concerned government agencies turn deaf ear to the peaceful protests, difficulties for others are bound to be created. Therefore, we are compelled to call strikes even if they affect the general people."

Pashupati Chaulagain, a politburo member of Communist Party of Nepal-Unified Marxist Leninist, says that the parties are aware that strikes damage the country’s economy. But members believe that strikes are necessary to pressure the government to respond to the people’s voices.

In response, civil society has been appealing to political parties to end strikes that disrupt the economy. It has organized peaceful protests on various occasions.

Dhungana, the former speaker of the Nepalese parliament, agrees.

“Both the cause and the solution are with the Nepalese political parties,” he says, “and, as such, they should make firm commitment to stop the strikes.”

Local organizations call for meetings instead of strikes.

Samriddhi, The Prosperity Foundation – a nonprofit organization promoting civil, political and economic freedom in Nepal – has been running a campaign to resolve strikes since 2010, says the coordinator of the campaign, Dilip Gurung, in a phone interview.  The organization has launched the campaign in 27 districts, in addition to Kathmandu. The campaign’s name – Gari Khana Deu! – translates from Nepali to, Please Allow Us to Work for Our Living!

“To popularize the phrase, ‘Gari khana deu,’ among the people, appropriate T-shirts and stickers are extensively sold and billboards put up to convey the message,” Gurung says. "Similarly, multistakeholder roundtable meetings with the transport workers, student unions, political leaders and economists and businessmen are frequently organized. As a result of our campaign, the frequent full-day strike has been reduced to half a day or a few hours."

Business representatives and political parties have made several agreements to end the strike culture, Gurung says. But the parties have not implemented them.

Stakeholders must work together to stop strikes, which could destabilize the new republic, says Surya Silwal, a secretary in the prime minister’s office, in a phone interview.

“This type of strike as a means of protest to force the government to concede their demands may make the state weak,” says Surya Silwal, who is not related to Nawaraj Silwal. “After the decadelong insurgency, the country is in the critically transitional phase. As such, all stakeholders should work toward ending it at the earliest and be accountable.”

The strikers may have unrealistic ideas about the capabilities of the new state, he says.

“The protesters demand instant solution for their problems,” Surya Silwal says. “For the state, however, there are other priorities in the light of resource constraints and political instability.”

Therefore, political parties should make reasonable demands that the government is capable of addressing and discuss them with it instead of organizing strikes, he says.

Interviews were translated from Nepali.