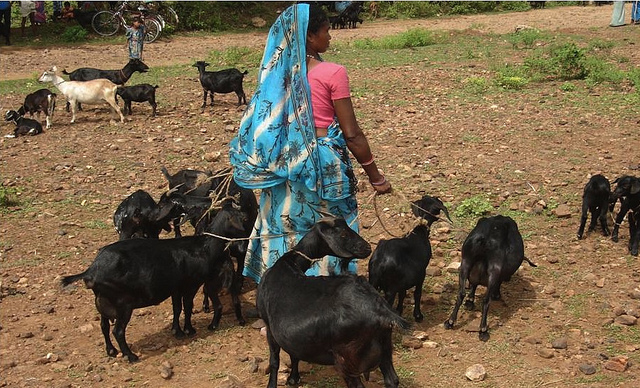 GUWAHATI, ASSAM, INDIA – Pratima Kharsa, a young girl from the Dimasa tribe, became pregnant after falling in love with a local boy. But when the news spread throughout her village in Assam, a state in India’s Northeast region, he publicly rejected her and the child.

Per the local customary law – law based on custom instead of legislation – the village head called a meeting and forced Kharsa to publicly declare the name of the father of her baby in front of a priest and village elders.

Parvati Thaosen, president of Shakti Mahila Mandal, a local women’s rights organization that works with tribes in the area, says custom dictated that Kharsa go into a nearby water body to declare the name.

After being named, the young man refused to accept her as his wife. Instead, he chose to pay a fine of 10,000 rupees ($200) to Kharsa for the child and married another girl.

“In majority of cases, men deny it and women have to face innumerable problems,” Thaosen says.

Months later, Kharsa gave birth to a daughter. She eventually married another young man in her tribe. But Thaosen says Kharsa was tortured in her new relationship, which came to a tragic end.

“Often, the couple used to have verbal brawl,” she says. “To get rid of this, Kharsa one day sprinkled kerosene oil over her[self] and committed suicide.”

She says there are many other women like Kharsa in tribes across the region who suffer unfavorable living conditions because they have little say to change them under customary laws.

Many tribal communities in the ethnically distinct states of India’s Northeastern region – Mizoram, Nagaland, Meghalaya, Arunachal Pradesh, Manipur, Tripura, Sikkim and Assam – continue to regulate themselves according to their customary laws rather than India’s more modern federal constitution. Women’s rights activists say that many of these laws are gender-biased in composition and orientation. In many areas, they are constituted and interpreted by male elders alone, leaving little say or consideration for women. Activists are working to help them change the laws.

Customary laws are a set of rules that attain the force of law in a society because they are observed continuously and uniformly over a long period, says Mary Beth Sanate, a social activist and member of the Assam chapter of Women in Governance, a network of women’s organizations, human rights defenders, activists and journalists across the Northeast region that work for human and gender rights. They are the totality of customs of a tribe, which hands them down from one generation to the next.

Sanate says customary laws have endured many generations, despite varied opinions on them.

“[The] Government of India recognize[s] and allow[s] its existence, so many tribes in India continue with their own customary laws,” she says.

She says that tribes are proud of their laws that represent their distinct cultures and traditions, but that many of these laws discriminate against women.

“Amidst their diversity, [the customary laws] have some commonalities – the most important being patriarchal, where women’s rights are denied,” she says.

“There are many dos and don’ts in customary practices, thus violating or suppressing potentials of women,” she says.

Customary laws around both marriage and divorce allow freedom and choice for men, the advocates say. Traditions of dowry are common througout the region, and men have a right to divorce at any time after the marriage for a small fee and the promise to provide support until she remarries.

“No tribal women have property rights,” Tontang says. “She has no inheritance rights and has no land rights.”

Thaosen shares an example from the Dimasa tribe.

“They only get a share in their mothers’ property,” she says. “Mothers’ property is few silver ornaments and clothes that the mother has sewn herself. If there are more than one sister, these things get divided among them. In case there is no son in a family, girl gets a small portion from her father’s property, and rest is decided by village head.”

Tontang says there are other tribes in Manipur, where she is from, with customary inheritance practices that go to great lengths to keep land out of the hands of women. In the case that a family has no sons, it has to adopt one or property goes to the nearest relative with a son or to the clan leader to decide.

Practices are of similar patrilineal nature among most tribes in other states in the region – except in Meghalaya.

“Women in this tribe have property rights,” Tontang says. “Youngest daughter gets entire property. But all decision-making authority lies with her maternal uncle.”

She says that even in these tribes, men are still in charge and offer no leadership opportunities to women.

“There is lack of opportunities for women in decision-making,” Tontang says. “Due to customary laws, they aren’t allowed to share their ideas in village decision-making.”

Tontang clarifies that not all customary laws hurt women, but she says they keep the power out of women’s hands.

“Some customary practices help women, but representation of women in decision-making is totally negligible,” Tontang says.

She says that the region’s tribes follow patriarchal systems in which men make most of the decisions.

“Customary laws are amended by elders in absence of women,” she says. “No tribe is headed by women. Nagas, Kukis and Meitei tribes follow traditional norms that are rigid and anti-gender.”

A 1993 amendment in India reserved one-third of seats in legislative bodies for women. But a Women in Governance report notes that this hasn’t been implemented in all states in the region.

“Women who want to contest are threatened with dire consequences by men,” according to the report. “Women aren’t allowed to enter youth clubs.”

Women in Governance works on collecting unwritten documents and documenting customary laws in order to open them for discussion, says Bondita Acharya, a member of the Assam chapter with Sanate.

She says this process is crucial to increase women’s rights.

“Once codified, they become law, and then we can’t change them,” she says. “There are no rights for women in customary laws.”

Sanate says that women’s groups across the states have been discussing how to modernize customary laws through documentation, amendment and codification in order to suit the growing demand for gender equality. In many studies, seminars and workshops, women have voiced a need to make changes, she says.

But not everyone wants change.

Suraj Kumar, a businessman from Assam, says that customary laws are binding, as they have governed the region for ages. He says they need to be carried out in letter and spirit.

But with increased awareness and sensitization, things are slowly changing, according to the Women in Governance publication. It cites the visibility of women in the Naga tribe of Manipur in governmental and nongovernmental bodies. Still, it admits that documentation is crucial to future progress.

In 2010, Women in Governance began to collaborate with Shakti Mahila Mandal.

Thaosen says Shakti Mahila Mandal strives to raise community awareness by sensitizing people to issues such as domestic violence, especially in relation to dowry. She says staff members also work with women directly and have settled about a thousand cases of domestic violence since beginning operations in 2006.

“Six years ago, we came up with Shakti Mahila Mandal and started taking up women-related issues, be it dowry or domestic violence or other form of violence against women,” she says. “We visit victims’ places and help them in registering complaints with police. In case victims don’t want police to interfere, we help them in sorting out issues and counsel families.”