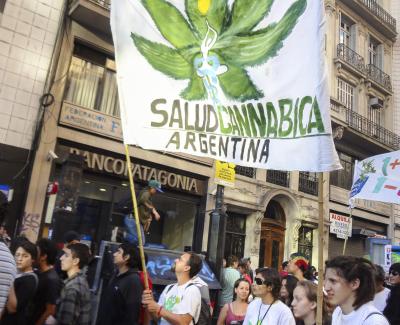 BUENOS AIRES, ARGENTINA – A large cloud of smoke rose to the sky Saturday in front of Argentina’s Congress building in Buenos Aires, the nation’s capital. Thousands of arms and shouts of “Legalization! Legalization!” pierced the air as activists at the Global Marijuana March urged legislators to change Argentina’s narcotics law to legalize the cultivation of cannabis and possession of marijuana for personal use.

The march drew about 100,000 people – almost double the number of participants than last year – according to the event’s website. The Coalición Latinoamericana de Activistas Cannábicos, which comprises various cannabis activism groups in Latin America, organized the march.

“We are fighting for a change in the drugs law,” says Matías Faray, a founding member of one of these groups, Agrupación de Cannabicultores del Oeste.

A case against him regarding a charge of cultivating cannabis for personal use has been ongoing for two years.

The Latin American coalition of cannabis activists is not fighting for its complete legalization. Rather, the coalition seeks a nuanced approach that legalizes cultivation and possession strictly for personal consumption – not for commercialization.

The coalition wants governments in the region to recognize the rights of citizens to cultivate cannabis for their own use; to enable access to it for health benefits in a regulated manner; to diminish the market that makes selling marijuana a lucrative business; to interrupt the flow of money that fuels the drug trafficking industry; and to enhance public security, Faray says.

Musical bands disappeared among the crowds of marchers, jugglers, dancers, and vendors of crafts and homemade bread at the march on May 4. As evening fell, the event transformed into a party.

Meanwhile, owners of cafes and bars lining the plaza ordered their servers to lock the doors. Police advised people to take the subway to another station to avoid mingling with the marchers, and several passersby ranged from astonished to indignant.

“This is insanity,” says Beatriz Guerra, a passerby surprised to see such a concentration of people smoking.

Activists say that being arrested for cultivating cannabis or possessing marijuana for personal use is a violation of their personal liberties and ask police and prosecutors to instead target drug traffickers. Judges are increasingly scrutinizing the constitutionality of articles that restrict private acts that do not harm others. In addition to seeking expanded legal rights, activists educate cultivators and consumers to increase their safety and other citizens to reduce stigma. Meanwhile, some addiction specialists respond that marijuana has adverse health effects and call for the maintenance of the current law.

But the law does not set parameters for the amount of marijuana or number of cannabis plants that distinguishes commercialization from personal use. Alvarez says this is up to the discretion of the judge who hears each case.

The Global Marijuana March has taken place around the world since 1999 on or around the first Saturday of May. Residents of more than 200 cities signed up this year to carry out local events, according to the international march’s Facebook and Wikipedia pages.

In Buenos Aires, the participants gathered in front of Casa Rosada, the seat of the national government, and marched about 15 blocks to the Argentine Congress. In addition, smaller marches took place in other cities around the country.

The activists at the Buenos Aires march demanded changes in Article 5 and Article 14 of Ley No. 23.737, known locally as the narcotics law or drugs law. These articles penalize cultivation and possession for personal consumption.

The activists want to grow cannabis without police raiding their homes. They want to carry a personal supply of marijuana in their pockets without the fear of going to jail. They say that detainment for either act is a violation of their personal liberties.

Faray says that the core of their demand is that the police concentrate their efforts on arresting those who sell drugs, rather than people like him.

Faray says police intercepted him on April 14, 2011, when he was leaving his house. They searched his home and arrested him after finding 10 flowering cannabis plants and 15 seedlings. The court sentenced him to 15 years in prison on the charge of cultivating cannabis for commercial purposes.

But after 15 days in prison, the judge sent for him, talked to him, and decided to grant him a special release while the court re-evaluates his case.

“I got out because of pressure from the people, from my colleagues from my group and all the media that took the issue seriously,” Faray says.

The court reduced his charge to cultivation for personal consumption. Two years later, he is still awaiting the resolution of his case.

“I want them to declare me innocent because I am innocent,” he says. “They are not going to condemn me for cultivating what I consume.”

The judicial climate is slowly shifting in the activists’ favor. Alvarez says a trend is prevailing among his colleagues to scrutinize the constitutionality of Articles 5 and 14.

“Slowly, a trend in this direction is being established,” he says. “In my opinion, among the judges, the protective interpretation of private actions is being widened and to include within them the self-referential actions, such as those who have their own consumption as the ultimate objective.”

“There is a sphere of the private matters of people in which neither the state nor other people can interfere,” Alvarez says. “The state should stop trying to be in charge of persecuting people for what those people do with themselves. The state cannot intervene because there is no affection of another.”

Every judge has the power to declare a law unconstitutional, Alvarez says.

In a November 2012 ruling by the federal appeals court where Alvarez serves in the capital of Buenos Aires province – Sala II de la Cámara Federal de Apelaciones de La Plata – it declared a paragraph of Article 5 of the narcotics law unconstitutional in a case regarding cannabis cultivation. The paragraph outlaws the cultivation of plants and storage of seeds to produce narcotics as well as the production of narcotics.

Even the nation’s Supreme Court declared in 2009 the unconstitutionality of Article 14 of the narcotics law for its second sentence, which assigns a jail term of one month to two years for possession of marijuana for personal consumption.

This declaration carries significant weight because it came from the Supreme Court, Alvarez says. It generates a certain climate in favor of treatment of the issue in the legislative sphere, but there have been no dates set by Congress to discuss it.

Various political parties have been developing legislation on the issue, but there are no concrete bills in play, Faray says.

Meanwhile, activists are working to influence local practices and attitudes.

In addition to campaigning for cultivation and possession rights for personal use, Faray's group aims to reduce harm among consumers, he says. For example, the group explains to people how to grow their own plants to ensure the quality of what they consume and to distance themselves from dealers.

The group also teaches people how to make products derived from cannabis for therapeutic purposes – similar to the use of alcohol in gels – for arthritis or osteoarthritis.

In addition, the group informs people in general about cannabis to combat misconceptions and stereotypes, Faray says. For example, it strives to banish the idea that marijuana use leads to violent behavior.

“A change in the drugs law is coming,” Faray says. “And we, as a social organization, have to prepare society for that change.”

Just 50 meters from Faray, on the other side of the barrier erected by the police to protect the national Congress building, Guerra continues to stare in astonishment at the demonstrators.

“Without marijuana, we used to live better, without violence,” Guerra says. “Now, they are prone to violence. They can’t think. Their body does not function.”

Psychiatrist Eduardo Kalina, a professor of pharmacotherapeutics and neurobiology of addiction at the Universidad del Salvador in Buenos Aires, is in favor of maintaining the strict prohibition of marijuana to avoid expanding its use. He says that it is an addictive substance that promotes alcohol intake, produces psychosis in certain consumers and is carcinogenic when smoked.

“The effect of marijuana is prolonged,” Kalina says. “Withdrawal is felt only at 15 or 20 days. That is why it is enough for the delusion of thinking that it is a substance that you do not need. However, it creates dependency, and the person begins to need it.”

All addictive substances – marijuana, tobacco or alcohol – are harmful for people, Kalina says. Moreover, he explains that one of the components of cannabis – dronabinol – has an anti-nausea and anti-vomiting effect that inhibits the natural brake that the body puts on excessive alcohol consumption.

“That is the reason why people who consumed marijuana can drink much more without having signs of alarm,” he says. “This is very dangerous.”

Smoking marijuana cigarettes also increases cancer risks, Kalina says. Marijuana looks harmless before it is smoked, but the deeper you inhale and the closer you get to the butt, the more quickly you can get cancer, he explains.

The final decision on the legality of cultivating cannabis and possessing marijuana for personal use lies with the national Congress. Faray says he wants his case to set a legal precedent that aids in the modification of the narcotics law.

“I want to set a precedent to continue changing the context a little,” Faray says. “I have no fear of going to prison. I am not going to remain inside. That is not going to happen because the universe is on my side.”