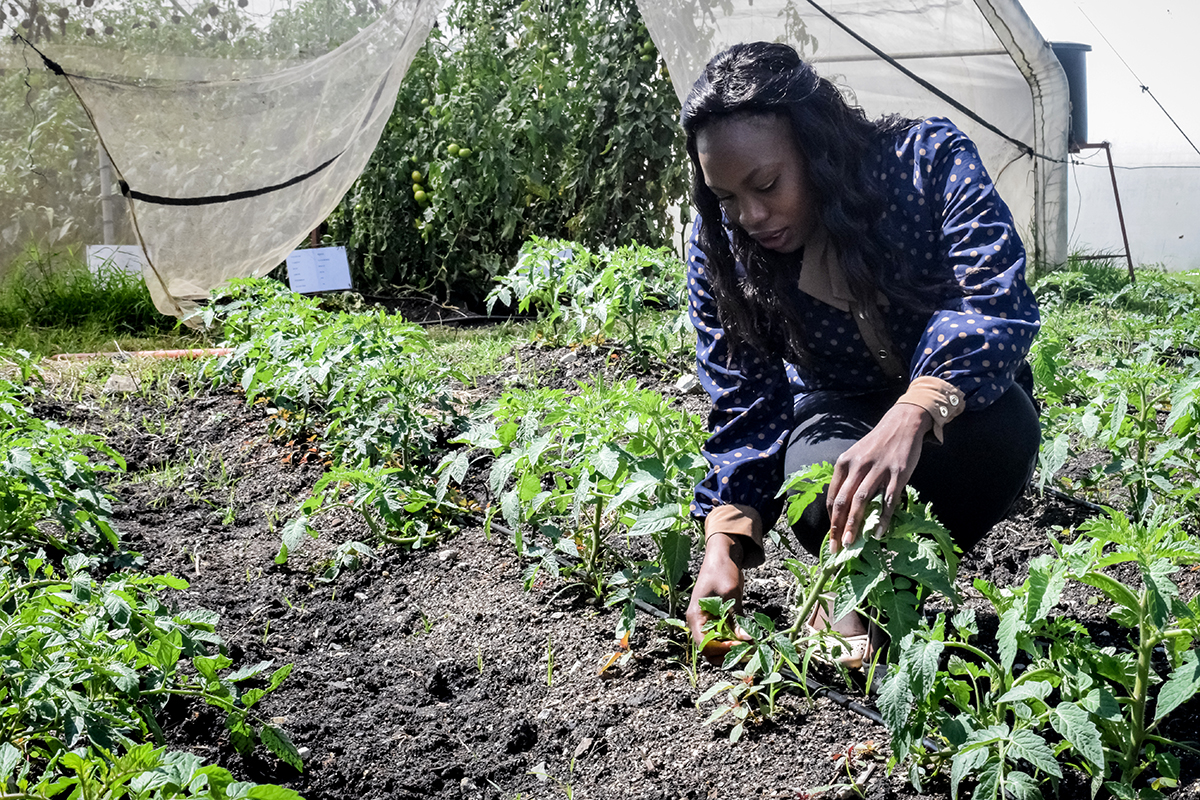 HARARE, ZIMBABWE –  Yvonne Kazingizi, 25, tugs on a pair of boots before she ventures out to work in her backyard.

Kazingizi graduated and received her national diploma in 2014 with a speciality in accounting. But she struggled to find a job — as do an estimated 95 percent of the population as the economy continues to free fall. The country recently unseated former president Robert Mugabe, whose government has long been the target of global sanctions, but there’s been little indication of economic improvement.

So Kazingizi started farming. Then she began selling her crops to make some money.

“Farming is something that I think is my calling, and I am passionate about it,” Kazingizi says.

In Harare, the capital city, young people are growing a movement to turn indigenous agribusiness into a popular and profitable venture. While the crops are easy to farm, young famers say they are hard to sell because the long-standing national cash shortage means that Zimbabweans typically opt for cheaper processed foods.

Indigenous plants are species of vegetation that are native to a specific region or country. According to the Food and Agriculture Organization of the United Nations (FAO), Zimbabwe is home to 6,000 indigenous plant species, a third of which are edible. They include grains, roots, fruits and vegetables.

In a 2011 report, the Worldwatch Institute, a nonprofit that focuses on improving sustainability through food and renewable energy, notes that indigenous crops such as beans, cowpeas, groundnuts and round nuts are nutritious and can help repair damaged cells.

Despite their nutritional benefits, indigenous crops are not common in urban diets in the country. As income levels across sub-Saharan Africa rise, the demand for processed food is also rising. In 2010, processed foods accounted for 70 to 80 percent of food expenditure among eastern and southern Africa’s middle class. But in Zimbabwe, cash shortages mean that indigenous crops, which tend to be more expensive than processed foods, are out of reach for many.

Processed foods are both imported and produced in Zimbabwe. They are processed to extend shelf life and eliminate micro-organisms that may cause disease. But due to high levels of heat, light and even the use of chemical fertilizer, vital nutrients like thiamine and vitamin C can be lost during processing.

Kazingizi uses organic fertilizers like manure to farm her crops. Each week, she supplies supermarkets and wholesalers with 25 kilograms (55 pounds) of her produce, mainly groundnuts and round nuts, her bestselling crops.

Kazingizi also sells her crops at the local market, but she says that the biggest challenge there is convincing customers to opt for indigenous products instead of crops grown with chemical fertilizers or processed foods.

But Kazingizi says she has already garnered a small pool of regular customers.

“l do not want my children to get used to fast foods or processed foods because they are unhealthy,” she says.

The farming season lasts for three to six months, depending on the crop. During that time, she says she makes just enough money to take care of herself, pay temporary hires who help distribute her crops to wholesalers and keep her small business going. 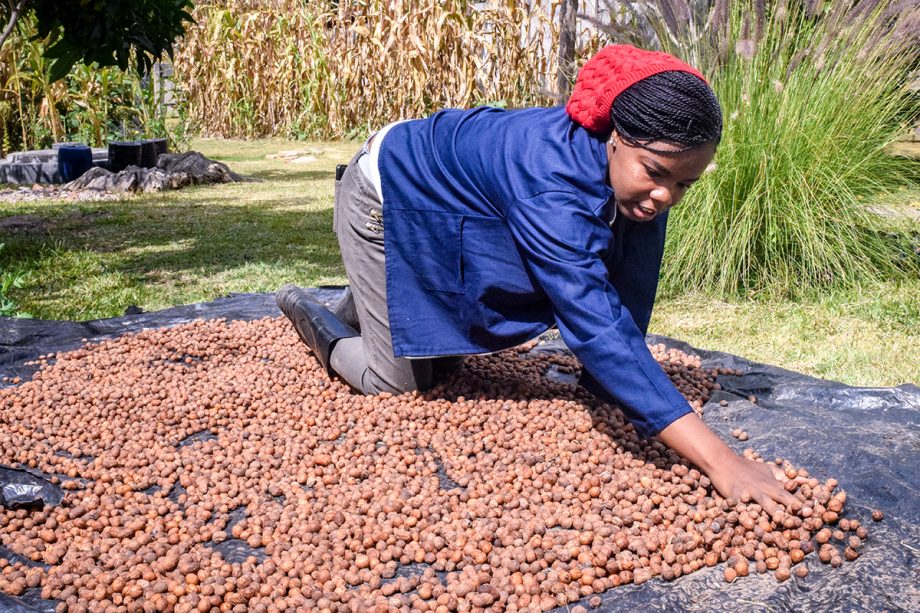 Yvonne Kazingizi lays indigenous nuts and beans out to dry in her backyard in Harare, Zimbabwe. Drying the nuts helps preserve them for the offseason. Kazingizi is a backyard farmer who specializes in indigenous crops.

Isaac Sinduna says he prefers to eat indigenous foods because they rarely contain additives. Unfortunately, he says he cannot afford to buy them.

Sinduna says very few Zimbabweans are aware of the health benefits of indigenous foods because they do not have access to medical research.

But Melody Shaya, an agronomist, says indigenous crops like beans are common in rural parts of the country because they are high in protein and provide a cheaper alternative for families who cannot afford to buy meat.

Rumbidzai Mbambo, who has been growing indigenous crops for two years, says these crops have been a part of people’s diets for a long time, but farming them is unpopular because of their association with rural poverty.

“Not many people are keen on growing them, and it’s associated with people in the rural areas who farm these for subsistence,” Mbambo says.

In addition to selling her products at the local market, Mbambo says she now targets churches and community gatherings to increase sales. 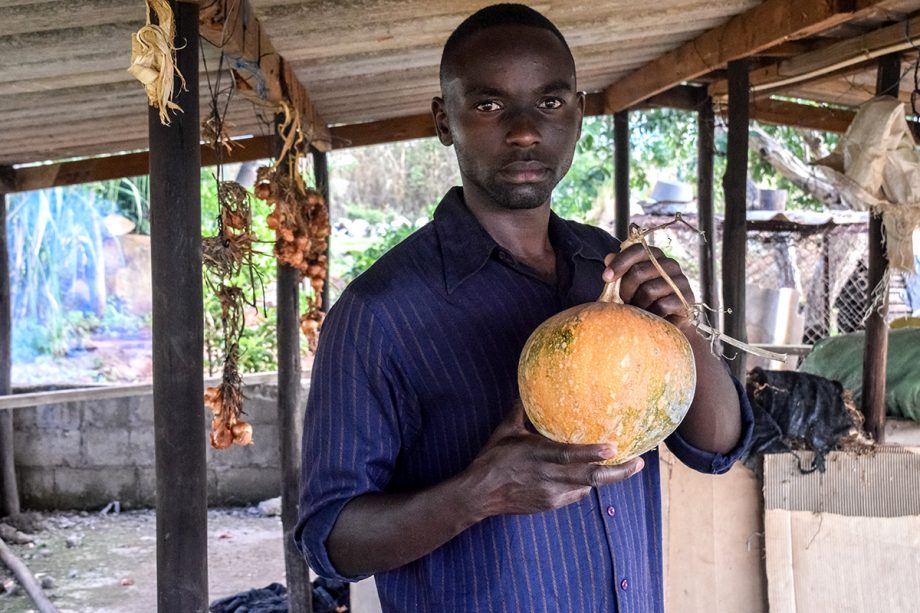 Ashley Tatenda Musafare shows one of the pumpkins that he grew in his backyard in Harare, Zimbabwe.

Law student Ashley Tatenda Musafare grew up on a farm where his father grew indigenous crops.

Now, at the age of 29, Musafare says his perception of farming has changed.

“l am now seeing farming as a business and not just as a hobby,” he says.

Musafare has a staff of two. They grow crops like okra, blackjack (a flowering plant used in herbal medicines) and round nuts, their best seller.

“Many people do not know that indigenous crops are healthy and affordable. This is why it is hard for me to make sales,” says Musafare.

But he hopes that his business will help other farmers and unemployed youth realize the market potential.

“We see our company growing to be a leader in the agricultural sector. Other youths should utilize such farming opportunities so that they create employment for themselves,” Musafare says.