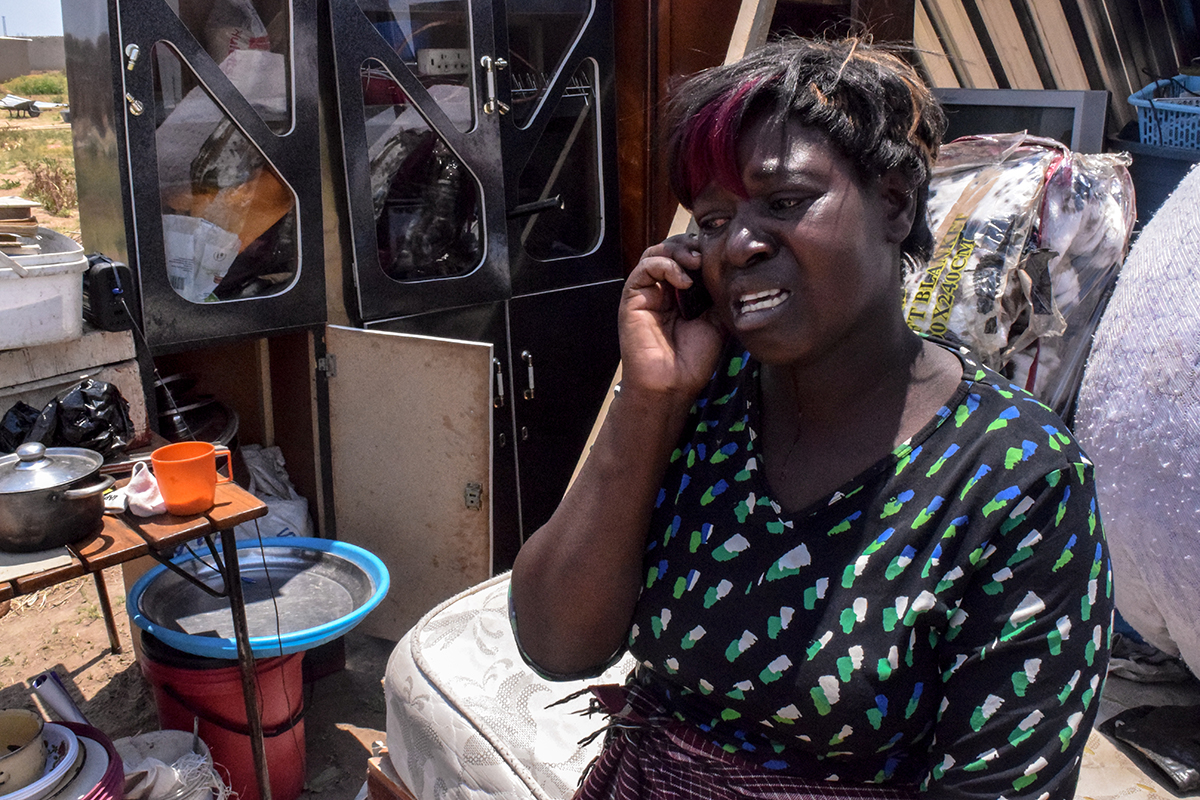 HARARE, ZIMBABWE — Eugenia Nyowani, a widow, has nowhere to go. Her house was destroyed late last year because it was built illegally, something she didn’t know when in 2013 she began making payments toward a $5,000 total price for the land where it stood.

“It’s not easy to find money these days,” she says, as tears roll down her cheeks. “Since yesterday, we have been living outside. I just slept outside with my children.”

INSIDE THE STORY: Seeing the owner of a demolished home made Global Press reporter Linda Mujuru look into how people suffer at the hands of land barons. Spending time with people who had been duped into paying for land that was not for sale made her hope for better protections for vulnerable families. Read the blog.

Nyowani’s 15-year-old son tries to comfort her. Her shrieking voice draws the attention of passersby, who shake their heads in dismay. They know what she is feeling.

The government has swept through illegally built settlements in recent years and destroyed them, sometimes without warning, with no regard to the fact that many people living there were under the impression that they legally owned the land. At times, private companies clear their own land.

Harare City Council officials say there are no available statistics on the number of people who have lost their homes in the sweeps.

Naboth Dutuma says he didn’t get an eviction notice before his house was destroyed in the same demolition that razed Nyowani’s home. He’d lived there with his family since 2013, when the Nyashadzamwari Housing Cooperative sold him the land.

“There was always a dispute over who owns the land,” he says. “We thought everything would be sorted out. I have a wife and two children. My last born is only 2 weeks old. We are just hoping that they will do something to help us.”

BAK Logistics, a shipping, transport logistics and freight company, is the actual owner of the land where Nyowani and Dutuma lived, according to deed documents obtained by GPJ. The two thought their land purchases were legal.

City officials urge prospective buyers to check property records to ensure that the land is available for purchase, but those records come at a cost. GPJ reporters paid nearly $30 to review and copy property deeds for the land on which Nyowani’s home was built. That’s a huge sum for many people in Zimbabwe, where up to 90 percent of the workforce is estimated to be unemployed, and where a severe cash shortage has people scrambling for pennies. 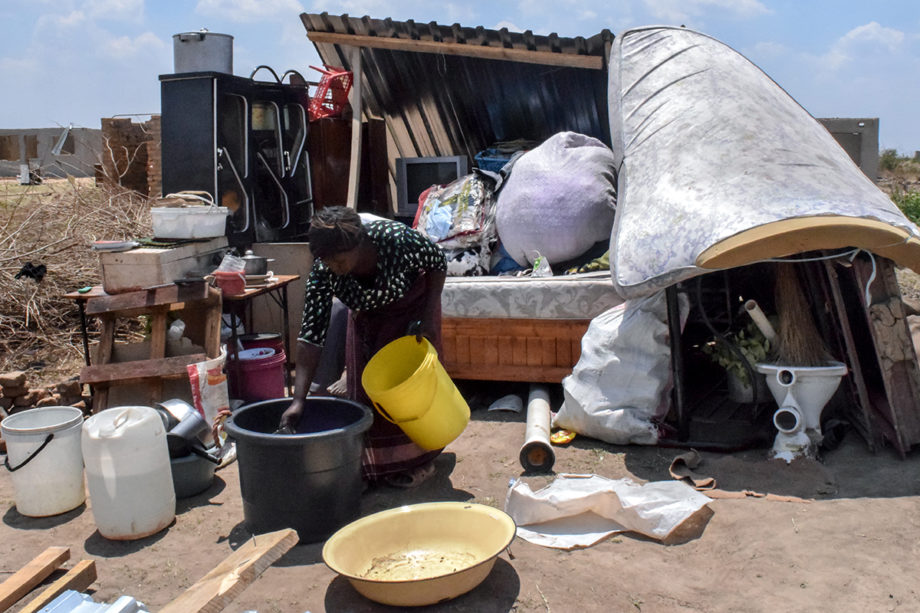 Eugenia Nyowani made payments on land sold to her illegally. Now, her investment is gone.

The rapid expansion of informal settlements in urban areas, a trend sparked by a growing need for housing, has become a major problem for city officials, who are tasked with managing that growth.

It’s not clear how many informal settlements exist in Zimbabwe or even in the Harare area. One official in the Ministry of Local Government, Public Works and National Housing told GPJ that all areas controlled by cooperatives are considered informal, because they do not have standard services, such as plumbing.

A large number of those settlements developed when so-called land barons began selling plots that they didn’t own. The government has in recent years taken firm action to clear the country of illegal settlements, even at the cost of people who were duped into paying money for land that was owned by someone else.

In 2014 and 2015, according to report by Action for Southern Africa, houses in Chitungwiza, a town near Harare, and Budiriro, a suburb of Harare, were demolished despite a court order against the demolitions. Thousands of people were affected. Those are just some examples of the waves of demolitions that have taken place in urban areas across the country.

There was always a dispute over who owns the land. We thought everything would be sorted out. I have a wife and two children. My last born is only 2 weeks old. We are just hoping that they will do something to help us.Naboth Dutuma, who lived on land owned by someone else beginning in 2013 until his home was destroyed in late 2016

It’s not the first time such demolitions have taken place.

In 2005, the government launched “Operation Murambatsvina,” a cleanup campaign to rid the country of homes and businesses built or operating illegally. By July 2005, an estimated 650,000 to 700,000 people had lost their homes, their livelihoods or both due to the campaign, according to a UN report.

In the cases of Nyowani and Dutuma, their homes were built on portions of the 234 acres that BAK Logistics, a subsidiary of TSL Ltd., has owned since 1954. Tirivepano Housing Cooperative and Nyashadzamwari Housing Cooperative, the fly-by-night companies that began profiting from the false sale of plots of that land in 2013, were notified that demolitions would take place, says BAK Logistics property manager Lovemore Chivaura.

Both cooperatives were formally evicted in June 2016, and were told to vacate the land five days after the demolition order was granted, Chivaura says.

Tapuwa Chimbandi, the chief security officer of the Nyashadzamwari Housing Cooperative, says the land was taken from a White commercial farmer in 2000, in the early days of Zimbabwe’s land reform, when the government forcibly evicted many White landowners in order to shift ownership to Zimbabweans.

Chimbandi says his mother, who led the housing cooperative, died in August 2015. The cooperative’s vice chairwoman refused to comment.

Repeated phone calls made to Tirivepano Housing Cooperative did not go through. The cooperative’s offices were closed when Global Press Journal reporters visited them, and they were later demolished along with nearby homes.

Local government officials say people who are illegally settled have no choice but to move.

“Our message is very clear: Anybody who is settled on institutional land, land for hospitals, schools or business centers, will eventually have to move, and whatever money they will have paid the land baron is money going down the drain,” says Michael Chideme, acting corporate communications manager of the Harare City Council. 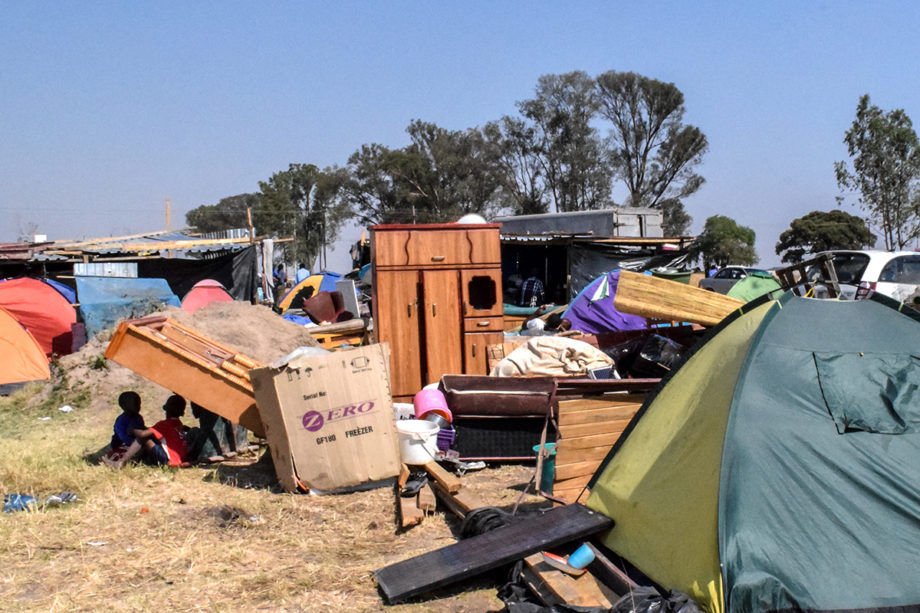 The belongings of families who lived on land in Harare that was illegally sold to them are dumped near now-demolished homes. The demolitions occurred without warning, residents say.

The local authority has sent out letters warning people to stop illegal construction, but those letters seem to have been ignored, Chideme says.

The city is running a campaign to raise awareness on proper land allocation, he says.

Chideme encourages people who are duped by land barons to make police reports.

He says that in some cases the land barons have been taken to court and jailed for about four years over these issues.

For Nelia Gombami, who built a five-room house on land that Nyashadzamwari Housing Cooperative sold her in 2013 for $3,000, it’s too late to save her investment. She sits outside the rubble of what was her home.

“We don’t have information up to now,” she says. “Our houses were just destroyed.”

Gombami says she and others were told some time ago that the land where they’d built homes was state-owned and managed by the Nyashadzamwari Housing Cooperative, but no one at the cooperative has been available to offer an explanation as to why that claim was made.

“We have tried to contact the leaders of the Nyashadzamwari Housing Cooperative, but they are nowhere to be found,” she says.