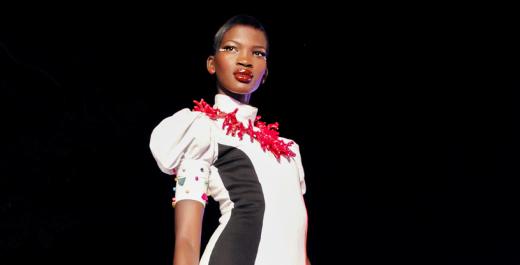 The chief fashion designer and managing director of Arapapa Consultancy Ltd., a fashion and modeling firm, encourages consumers to embrace local designs amid an influx of less expensive clothes from China.

Blending local materials with those from various parts of the world makes Anzo’s designs stand out. Most of her designs are brightly colored. Some are patterned.

Anzo also custom-makes clothes for occasions such as weddings, parties, traditional ceremonies and official events, she says. Her work promotes Uganda’s cultural heritage because she tailors the clothing to mirror the traditional styles of different tribes.

“Local fabric and design is very important, as it carries symbols identical to Ugandans,” she says.

While preserving Ugandan culture, Anzo is also advancing the country’s fashion industry through her innovative work.

When she entered the industry in 2001, there were only four designers in the country with fashion degrees, she says. She estimates that number has risen to 60, thanks in part to Uganda International Fashion Week, which she established in 2003 to showcase the work of up-and-coming designers.

“Lovers of fashion and design have the opportunity to promote their work during Uganda International Fashion Week,” she says.

“I am excited to say that I have helped to contribute to the creation of a fashion and modeling industry in my country,” Anzo says.

Anzo started working as a fashion designer in 2001 after graduating from Dolphin Fashion College in Kampala, the capital of Uganda. She founded Arapapa Consultancy Ltd. the same year.

Starting the business was difficult because the government was not supportive of local investors, she says. A lack of capital hampered entrepreneurs.

“In Uganda, there was a tendency to support foreigners,” Anzo says. “Local investors were not really valued. Their ideas were stifled because of [a] lack of funds.”

About 8,000 to 10,000 people now work in the fashion industry in Uganda, says Zeridah Zigiti, an economist with the Ministry of Finance, Planning and Economic Development.

Arapapa Consultancy Ltd. employs 26 people, 14 of whom work full time. Anzo has also attracted people to the business beyond her company.

Asia Salima, an up-and-coming fashion designer based in Kampala, says Anzo inspired her to enter the fashion industry.

Like Anzo, Salima promotes local designs. She encourages Ugandans to embrace them to support their people, to create jobs in the country, and to boost their own self-worth, Salima says.

“Ugandans need to learn that they are not second-class citizens, so they shouldn’t wear secondhand and cheap, imported clothes,” she says.

The Ugandan fashion industry faces stiff competition from China, which exports cheaper garments, Anzo says. A shirt from China, for example, costs 3,000 Ugandan shillings ($1), while one of hers goes for 100,000 shillings ($40), she says.

The high quality of her creations accounts for the price difference, she says. When she started, she used only local cotton and kikoyi, a beautifully hand-woven material unique to Uganda and some parts of Rwanda, but the factories that manufactured these fabrics collapsed for lack of funding. She now uses cotton from Jinja, a city in eastern Uganda, and other materials from various parts of the world.

“Now we have, as you can see, African fabric mainly from West Africa – from Ghana, Nigeria and Sierra Leone – which are trendy and can be worn across the globe, not just locally,” she says, pointing to a display stall in front of her shop at the Nakumatt Oasis Mall, one of the largest shopping malls in Kampala.

Doreen Musiime, a 32-year-old sales executive for a Kampala greeting card company, buys clothes from Arapapa once in a while when she can afford it. She is proud to wear Anzo’s designs because they give her a sense of belonging, she says.

“When you wear African, you make a statement that, ‘I am African, and I am not ashamed of it,’” she says.

Anzo says she also supplements her collection with fabric from Europe to adequately compete in the global market. Customers outside Kampala can buy her clothing online.

Anzo plans to expand her business by opening branches in different parts of the country and training more models. She also aims to further stimulate the Ugandan fashion industry.

“I would love to see the fashion industry become more vibrant, with industries manufacturing local fabric reinstated and modeling recognized as a profession,” she says.