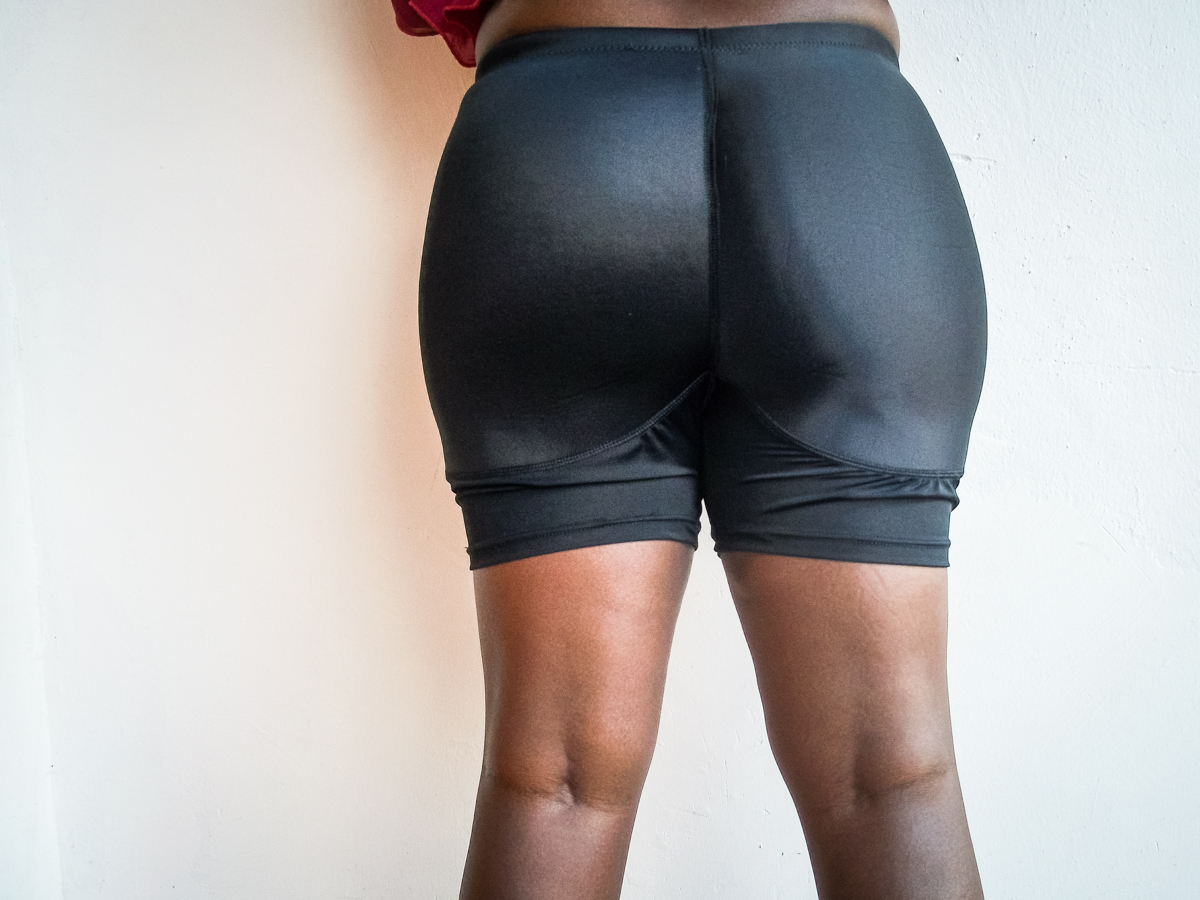 KAMPALA, UGANDA – Flora Nkwanzi, wearing a tight-fitting orange dress, stands on the veranda of her home, looking out at the freshly pruned hedge that surrounds her house in Nagyera, a suburb of Uganda’s capital, Kampala.

Although Nkwanzi is slender and weighs only about 50 kilograms (110 pounds), her buttocks appear big and her hips wide. Her curvaceous figure becomes even more pronounced as she bends down to pick up a multicolored scarf that has dropped to the floor.

Nkwanzi, 28, wears undergarments padded at the hips and buttocks to appear curvy.

A sales executive with a telecom company in Kampala, Nkwanzi says she owns three garments that add volume to her lower body. She wears them every day.

The garments boost her self-esteem, she says.

“I feel confident when I am walking around swaying my hips and bums,” she says, running her left hand across her padded left hip and bum. “I am enjoying my life.”

Nkwanzi has always desired a curvy figure because her sisters are curvier than her, she says. Without enhancements, she felt inferior, less beautiful.

She tried eating more food to add weight, but her hips and buttocks did not grow bigger, Nkwanzi says. She only became fat.

“My two sisters have big hips and bums,” she says. “I have grown up feeling ugly because whenever I walked with them, they were complimented and I was not.”

Curvaceousness is integral to the Ugandan standard of beauty.

Some women who are not naturally curvy are wearing padded undergarments that enhance their hips, breasts and bums. While some men appreciate women who wear these garments, others say enhancing ones’ body parts is a sign of insecurity.

“The stereotype of true African beauty is that someone has to have some flesh on her,” she says.

Some cultural practices show how much big-bodied women are valued in Uganda. In western Uganda, a young woman who is preparing to wed is kept in the house and fed ghee – clarified butter – to fatten her, Ebila says.

In some communities, the mother of a baby girl will put a string of beads around the baby’s waist to monitor her weight gain, she says. The mother is happy when her baby outgrows the string of beads.

A famous Ugandan poem, “Song of Lawino” by Okot p’Bitek, incorporates the Ugandan standard of beauty, Ebila says. In it, Lawino, the protagonist, praises herself as beautiful because she has a curvy figure and taunts her co-wife for being skinny.

“Plumpness is seen as a sign of health,” Ebila says. “The society looks at a plump woman as someone who can produce children.”

Some girls in Uganda feel culturally pressured to look curvy. They feel they have to wear padded underwear to fit in.

Christine Abwoli, 33, a retail trader in Nansana, a Kampala suburb, says she has one bum-enhancing panty that she wears on special occasions such as weddings and parties.

“I have hips but I don’t have a bum, so I feel flat behind,” she says. “I wear this bum especially when I am wearing a party dress or well-fitting clothes.”

Abwoli says many people compliment her look when she wears her “bum.” She plans to buy more such garments.

“When I am wearing it, many people say I am smart, and I feel good,” she says.

The principal buyers of the garments are women between the ages of 24 and 40, says Agnes Keitesi, who sells the garments at her shop in Avemar Shopping Centre, one of the largest shopping malls in Kampala.

Keitesi started selling the garments that locals simply call hips, bums and breasts in 2011. Sales have been rising since the following year, she says.

“These extensions adequately expand the curves on a woman’s body, and it is not easy to tell that someone is wearing anything artificial unless one undresses them,” she says.

“I get about seven to 10 girls coming to buy hips, bums or breasts in a week,” Keitesi says, stretching a panty with hip padding for a client to see.

Two other shop owners in Kampala said they also sell seven to 10 items a week.

Keitesi says she does not wear extensions herself. At 48, she is too old for that, she says.

Interest in padding varies according to one’s circle of friends. Nkwanzi says many of her friends own at least one padded undergarment.

Nkwanzi learned of padded garments when a friend dressed in her presence three years ago, she says. She asked her friend where she had bought them, and she has been wearing them ever since.

Sarah Namaganda, a cosmetologist and owner of Sarah Beauty Centre, a prominent salon in Kampala, says a man who intends to propose to a woman inspects the lower part of her body first, underscoring why women feel a need to be curvy.

“Don’t you always see, when a man is interested in you, you always catch him trying to see around your hip areas or breasts?” she says, suppressing laughter.

Women who wear enhancers are just trying to measure up to the standards society has set, she says.

“Women who don’t have big buttocks try to buy these pieces in shops to look like they have them and fit in the society,” she says.

Namaganda says women should do what they can to get the looks they desire, including wearing bum enhancers. Looks are everything, she says.

“When one looks good, they get many things,” she says. “They can easily get a spouse or even a job.”

“Women with bigger bodies, bigger hips and breasts are more beautiful,” he says.

He says his wife is curvy.

However, Kashaija says he recognizes that not everyone finds big women attractive.

“I see big men like to marry small women,” he says. “One man’s meat is another man’s poison.”

And although some men do appreciate curvy women, some say bum enhancers put them off.

A boyfriend broke up with Nkwanzi after he discovered that her curves were not natural, she says.

Her current boyfriend has learned to live with the fake bum. He even encourages Nkwanzi to wear extensions so she will look more attractive, she says.

“My boyfriend likes me,” she says. “He tells me I am smart when I wear them.”

It is dishonest to give oneself a false appearance, and engaging in such deception can have serious consequences, including divorce, Musoke says.

“Those who add other things to their bodies, like hips and breasts, think God made a mistake in creating them the way they are,” Musoke says.

Others question the validity of Uganda’s beauty ideal.

Having wide hips, a big bum and large breasts is not synonymous with happiness, says Fiona Kwikiriza, a third-year student at Islamic University in Uganda.

“I have all the curves many would wish to have, but I don’t think I am happier than those who don’t have them,” she says.

Kwikiriza, 27, has had many suitors but has yet to find a man of her dreams. She doesn’t think finding a mate depends on having the right body type.

“I am single at my age,” she says. “Many men come and propose marriage and want to take me out, but none has met my expectations so far.”

Kwikiriza advises women who are not curvaceous to accept themselves as they are.

“God has a plan and a purpose for all,” she says. “These girls should love themselves and be content.”

The garments, padded with silicone or rubber, can be uncomfortable in hot weather because they are heavy and fit tightly, Nkwanzi says.

“When it is hot, you can regret why you put them on,” she says. “But they are OK when it’s not hot.”

Despite the discomfort, Nkwanzi advises women who are not proud of some parts of their bodies to embellish themselves. Doing so will boost their confidence and open more opportunities.

“We women need to improve ourselves,” she says. “If one is short, they can wear high heels; if too dark, try to lighten the skin; if too big, try to slim; and if slim, wear some body extensions.”

GPJ translated some interviews from Luganda.