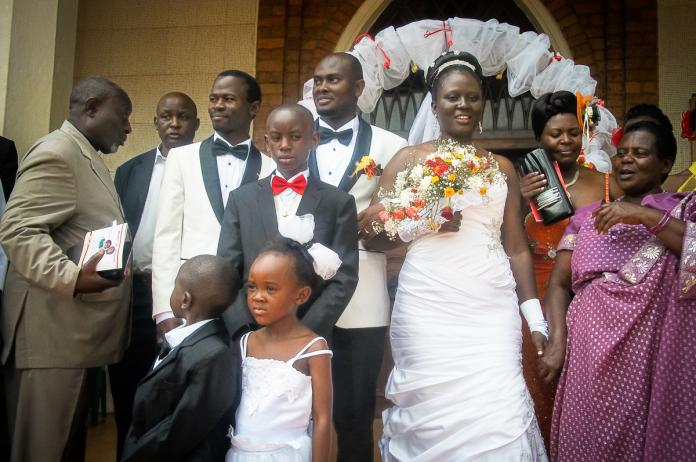 KAMPALA, UGANDA – When Rhona Ahairwe and Nimrod Asiimwe married last year, they celebrated their vows with 400 dinner guests at one of the most expensive venues in Kampala, Uganda’s capital. They listened to renowned gospel musicians and shared a 10-tier cake.

Six months later, Ahairwe and Asiimwe sit in their living room in Kampala, reflecting on the event captured in the framed photos around them. Ahairwe calls the wedding the most fulfilling experience of her life, eliciting a smile and muffled laughter from her husband.

“I felt like an achiever,” she says. “My heart was at rest – I was never going to be regarded as a failure after such a powerful wedding.”

It took the couple and their families more than two years to raise the 50 million Ugandan shillings ($17,800) they spent on the celebration.

Ahairwe, 25, a sales executive at a household products manufacturer, and Asiimwe, 30, a statistician with an NGO, earn a total of 2 million shillings ($668) a month, so the wedding was far beyond their means.

The lavish event was worth every shilling they spent and all the stress of the planning, Ahairwe says. With the contributions of family and friends, the couple avoided going into debt.

“You can only have a wedding once in your life, so it is important to make it the way you would want it,” she says.

Asiimwe agrees. Still, he regrets that the wedding budget forced the two to interrupt work on their house. They are saving up 25 million shillings ($8,300) to complete construction.

Ahairwe and Asiimwe are not alone in their quest to host an extravagant wedding here. Middle-class couples say these weddings help them appear successful, even though most acknowledge the festivities exceed their means.

Many save for years to finance their weddings; others seek financial support from relatives and friends; and some borrow from banks. Cashing in on the trend, more than 50 event management companies have opened in Kampala over the past five years. Television stations now air weddings for a fee, boosting the allure of hosting showy events. Experts warn couples against taking out loans to pay for weddings, saying debt can burden a young marriage.

Couples here used to celebrate simple church weddings attended by around 100 family members and friends, says sociologist Firminus Mugumya, a lecturer at Makerere University. Big, fancy weddings were considered a privilege of royalty and the rich.

Over the past decade, though, middle-class couples here have begun holding expensive weddings featuring sumptuous locations, food, drinks, music and décor. The community holds couples who throw such celebrations in high regard, fueling the trend, Mugumya says.

In 2012, when Uganda had a population of 34 million, nearly 37 percent of the nation was middle-class, according to the 2014 Poverty Status Report produced by the Ministry of Finance, Planning and Economic Development. The report defines a middle-class household as one that lives on more than $2 a day per person.

The wedding industry is growing worldwide. It is now worth $298 billion, according to Splendid Insights, a website that publishes market research on weddings.

Asiimwe advises other young couples to pool the resources of family and friends rather than going into debt.

“The more people you have in your network, the more money you will collect for your function,” he says.

But for some couples, that’s not sufficient.

Ritah Nyakaisiki and Andrew Magezi were married in January 2015 in Kampala. They had a church ceremony and then hosted a reception at Kalya Courts Hotel in Kampala. Family and friends put up most of the wedding’s 30 million shilling ($10,000) price tag.

But just before the wedding, the couple faced a 3 million shilling ($1,000) shortfall. They took out a loan that they are still paying off.

Some couples in Kampala borrow much more.

Jackline Amwemiire, a proprietor of an Internet café in Munyonyo, a Kampala suburb, got a salary loan of 10 million shillings ($3,300) to finance her wedding in 2010.

“My husband had no job, and I wanted a decent sendoff,” she says.

Amwemiire repaid the loan within two years, she says.

Allen Nayebare, chief manager of corporate affairs and communications at Centenary Bank in Kampala, says the bank does not market loans specifically for weddings. However, customers commonly obtain salary loans to finance their weddings, Nayebare says.

Rather than borrow from banks or family, some couples postpone marriage.

Secondary school teachers Agnes Akite and Joshua Okello have lived together for six years and have three children together. They have not married because they can’t yet afford the celebration they want.

Okello has promised to walk Akite down the aisle when he has saved 50 million shillings for a big wedding. He says he only wants to have a wedding that befits his status as an educated man. If he can’t afford that, he’d rather not have a wedding at all.

“As a man, I need to have a good wedding, not a cheap one where people will despise me,” he says. “I will wed her after I have saved enough money.”

Wedding planners are reaping the benefits of the elaborate-wedding craze.

Between June and December 2014, Next Events organized 12 weddings.

The costliest category is food and beverages, Nangira says.

The organizing fee is worth it, Nangira says.

“People are getting to know that you are better off handing over the function to a professional to get better mileage,” Nangira says. “Event managers have a name to protect.”

As a result, event management companies are springing up in Kampala.

Before 2010, Kampala had about 10 event organizing companies. Now it has more than a hundred, he says. Using locally published business listings, Global Press Journal verified the existence of at least 50 new event planning businesses.

“In the last five years there has been a surge,” Nangira says. “Many just joined.”

Patience Kahangirwe, an event planner in Kampala, organized two events a month when she started the business two years ago. Now she organizes at least two weddings every weekend, she says.

Bukedde TV, one of the most popular TV channels in Uganda, used to air weddings for free. But four months ago, it started charging 500,000 ($170) to 1 million shillings ($330) to air weddings on its shows.

Bukedde TV airs a two-hour wedding show every Saturday and Sunday. It airs two weddings in each episode, and each wedding is given at least 50 minutes. The videos include vows, receptions and speeches.

“We have very many people who wish us to go and show their weddings on our program for weddings, but there is not enough time to air them,” Mutaawe says.

Deogratius Mukasa and Fiona Namirembe, of Kampala, had their wedding aired on Bukedde TV last year.

“Some friends of ours had done it, and we felt it was a good thing,” Mukasa says. “We both wanted it.”

Despite social pressure, some couples prefer to hold smaller celebrations that are within their means, Ndyanabangi says.

Jotham Kasisi and Miriam Natukunda wed in November 2013 at the Church of Resurrection in Bugolobi, the Kampala neighborhood where they run a retail store. They spent just 5 million shillings ($1,760) on the event.

“We did not fundraise,” Kasisi says. “We only spent what we had.”

After an hourlong wedding ceremony, the church’s seating arrangement was reorganized. Guests were served soft drinks and snacks. The couple shared their wedding cake with their 80 guests.

“Many young couples want to host big weddings to meet standards other people have set,” Kasisi says, adding that she has met some couples who prefer to save up for a big wedding rather than have a small wedding now.

Mugumya, the sociologist, says the general perception in society is that women ask for big weddings as proof of their husbands’ love. But men feel social pressure too, he says. Hosting a big wedding has become a sign that a man has what it takes to manage a family, he says.

“In the long run, this affects the economic status of a couple as a result of the expenditures they incurred,” Mugumya says. “Some couples end up in debts, which might cause irreconcilable differences in a marriage, leading to a divorce.”

Ndyanabangi, the marriage counselor, likewise warns couples not to go into debt for a wedding celebration.

“Why have expensive weddings and become indebted?” she says. “Those weddings with cakes of 10 tiers, for who?”

Couples should not postpone marriage because of money, Ndyanabangi says.

“After all,” she says, “a wedding is the church ceremony.”