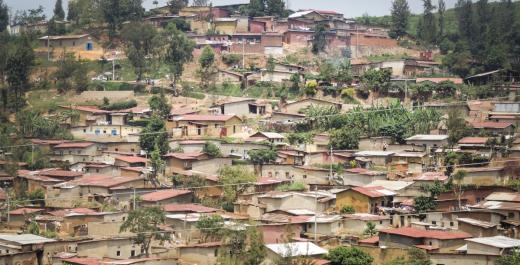 KIGALI, RWANDA – Ernest Nizeyimana has been avoiding relocating for a year.

Nizeyimana lives with his wife and three children in the Gatsata sector of Kigali, the Rwandan capital. The primary school teacher owns his home, an old house on a hill below a forest.

Gatsata is prone to flooding, landslides, lightning, heavy rain and wind. When it rains a lot, rainwater runoff from the forest causes flooding and landslides in the area.

Nizeyimana and his neighbors dig and build canals to divert water coming from the forest, but it does not always work. When heavy rains hit the hilly area, natural disasters destroy houses and claim lives.

The city government twice urged Nizeyimana and his family last year to relocate because his area was at risk for natural disasters, he says. But Nizeyimana refuses to relocate without monetary compensation for the value of his property, which the government is not offering. Without compensation, his family cannot afford to buy another plot of land and to build a new home.

“Relocating is a big challenge to us because there is no compensation,” Nizeyimana says. “Telling someone to leave without showing him where to go is a big problem. The leaders should know that we lack means.”

The government is focusing on communicating the necessity of relocating to avoid peril and on assisting low-income residents. It has not agreed to reimburse homeowners for the properties they vacate.

“Our duty is to make sure that all dwellers of high-risk zones are aware of the danger, and we train them so they know what to do during a disaster,” says Geoffrey Kyatuka, an environmental expert for the Kigali City Council. “There is no compensation involved, as they are the ones who decided to build houses in high-risk zones.”

The natural disasters that strike during the country’s rainy seasons have not yet affected Nizeyimana's home. So, like other residents of Gatsata, the family has stayed.

“We are waiting for the government to give us a place where to go,” Nizeyimana says. “There wasn’t any damage to my home, and I didn’t take any strategy to protect my family from disasters.”

Last year, the Kigali city government urged residents in high-risk zones, such as hilly places and areas prone to flooding and other natural disasters, to relocate. Although all renters have evacuated the areas, most homeowners still refuse to move without compensation for their properties.

The government has identified places for residents to relocate and offers varying levels of assistance depending on their income levels. But it recognizes that relocation is a long-term project. In the meantime, it continues to warn residents of the perils of staying in high-risk zones. It also funds projects to make these areas safer.

Bruno Rangira, director of media and communications for Kigali, says the government implemented its relocation program in 2008 to prevent rainy-season disasters. It renewed the program in 2013.

“Relocating families in high-risk zones is not a new policy,” says Fréderic Ntawukuriryayo, the public relations and communications officer for the Ministry of Disaster Management and Refugee Affairs. “But it was reinforced in February [2013] in a meeting chaired by the prime minister after devastating rains destroyed many homes in several sectors of the city.”

But of the 6,595 families living in high-risk zones in 2013, just 2,529 families have moved, according to a report Rangira’s office prepared for the Kigali City Council. That leaves more than 4,000 families living in defiance of relocation orders.

There are two rainy seasons in Rwanda – from February to June and from September to December. Winds and rains have gotten worse in recent years, Ntawukuriryayo says.

“Climate change is the primary cause of these natural disasters,” Ntawukuriryayo says. “Heavy rains and strong winds are causing damage throughout Rwanda.”

An international compilation of climate measurements confirms a sharp rise in rainfall in Rwanda over the past century. Rainfall during the September-December rainy season rose 10 percent from the first recorded period, 1900 to 1930, to the most recent, 1990 to 2009, according to the World Bank’s Climate Change Knowledge Portal. Rainfall during the February-June rainy season increased 3.82 percent over the same period.

Theogene Ntaribi, who is in charge of disaster research and capacity building in the Ministry of Disaster Management and Refugee Affairs' Research and Public Awareness Department, says the disaster toll rises each year.

The government made it mandatory for renters to evacuate high-risk zones, but it cannot force homeowners to move. Instead, it continues to encourage them to relocate.

The government allocates different levels of relocation assistance to these citizens according to their verified needs. Under a program called Ubudehe, a form of mutual assistance designed to raise people out of poverty, the government divides citizens into six economic categories. The Ubudehe categories range from abject poverty to affluence.

The first two categories consist of citizens living below the poverty line. Residents of high-risk zones who fall into these categories may move into government-owned housing in safer areas at no cost, the mayor says.

The third category denotes the poor – that is, citizens with very low incomes. The government identifies plots of land in safer areas that these citizens can purchase from it, Kyatuka says. It also provides them iron sheets to construct new homes.

The government will identify plots for financially stable homeowners – those in categories four and above – to purchase, but only if they request this help. If there are extra government-owned homes in relocation zones, higher-income citizens can rent or buy them.

The government urged Frodouard Nsabimana, an owner of a six-room house in the Kimihurura sector of Kigali, to relocate by September 2013 and offered him a plot to purchase in a safer area. But he still has not moved because he lacks the means to build a new house and does not qualify for free construction materials.

“My wish is to be given money for my properties for me to go buy another plot elsewhere and build another house,” he says.

Like Nizeyimana, Edison Nshimiyimana lives in a hilly area of the Gatsata sector. Nshimiyimana, who earns a living selling clothes on the street, owns a large, six-room house.

“I can’t leave this place,” Nshimiyimana says. “It’s where I belong. I have been here since a long time ago. Evicting me would be offending me. I am safe here, because the time I have spent here is long, and my security has never been exposed to dangers of disasters.”

Nshimiyimana does not have the means to move, he says. The government has offered him a plot to buy, but it is much smaller than the one he owns in Gatsata. He also does not qualify for construction materials. He added that he is holding out for monetary payment that reflects the current value of his property.

“I couldn’t plan to move from this place if the government has not forced me to, because I am safe here,” he says.

Residents of high-risk areas who live below the poverty line, on the other hand, do not object to relocation because they get to occupy government-owned housing free of charge, Kyatuka says.

Renters also have been more open to moving because they have no property investment to protect.

One renter, Olive Uwanyiligira, moved to a house in a safer part of Gatsata when the government instructed her to vacate a high-risk area of the sector.

“I have moved to a safe place, but I am still renting,” she says.

Because Uwanyiligira is a renter, moving did not bother her, she says.

“The only challenge I see is for people who were living in their own houses being evicted without compensation,” Uwanyiligira says. “This is being unfair to them because most of them are not capable of building new houses.”

Some homeowners who moved during earlier relocation campaigns, though, say they are relieved to be out of harm's way.

Emile Ruzindana, who is married with five children, vacated the home he owned in a high-risk zone in the Nyarugenge district of central Kigali in 2008. He bought an existing house and plot from the government in the Gasabo district.

“Vacating these risky areas was a good thing, because if I stayed here, I would have lost my life,” Ruzindana says.

It was hard for Ruzindana and his family members to familiarize themselves with their new surroundings, but their new neighbors welcomed them, he says.

“I was very happy to welcome new people to our place,” Habimana says in a phone interview. “I helped them to adapt in the new place, and now they are my friends.”

City officials urge homeowners who have not yet moved to reconsider.

Ndayisaba, the Kigali mayor, says each district selected the closest safe neighborhood for its residents of high-risk areas to move to. The government provides this information to residents in the relocation notifications it issues.

“The people have misunderstood the purpose of relocation,” Ndayisaba says. “They see it as oppression, but the Kigali City Council is trying to take care of them.”

The government is not punishing any homeowners for refusing to leave, Ndayisaba says.

“But the government will try to persuade them through public campaigns and monthly workshops that encourage people to relocate,” Ndayisaba says.

In the meantime, the government is taking measures to mitigate water damage in high-risk zones. It provides funding to plant trees and to dig water channels.

“Residents take part in these projects, which occur on the last Saturday of every month,” says Kyatuka, the Kigali environmental expert.

“The process of relocating those in high-risk zones is a lengthy one,” he says.

Nizeyimana, who continues to resist relocating, asks the government to listen to homeowners’ frustrations instead of pushing them to leave.

“Government officials are stepping up efforts to instruct residents to leave during the summer dry season,” he says.

But Nizeyimana says that if he must leave his home, he expects full compensation for the value of his property.

GPJ translated this article from Kinyarwanda. Patricia Sugi contributed to the reporting of this article.