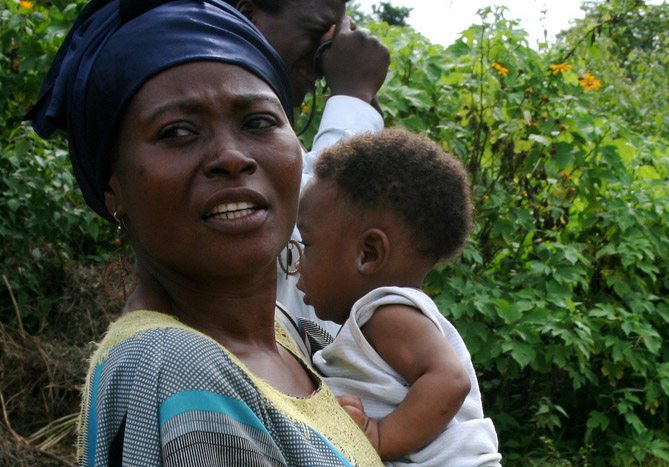 BAMENDA, CAMEROON – Delly Nji, 24, is married and the mother of four children. She says she became pregnant with her first child at age 13, after she was raped. But she says she didn’t realize it at the time.

“At that age, I didn’t even know what sex was,” Nji says.

She says that her grandmother had sent her to the farm to harvest yams. While at the farm, an older and bigger boy from their village held her down and forced himself on her. When she got home, she says she didn’t tell her parents. She says that the boy had threatened her not to tell anyone, and she also didn’t realize what he had done to her.

“I did not know what the boy had done to me,” she says. “I only remember how much pain I felt in my private part, but the pain disappeared after a couple of days.”

Some months after the incident, Nji’s parents discovered that her stomach was growing. They realized she was pregnant. Her parents beat her, which she says is common when teenage girls get pregnant here.

She says they demanded the name of the man who impregnated her, but Nji didn’t know. She still did not quite understand what had happened to her months back on the farm.

After days of interrogation, her mother asked her if any man had ever lain on top of her. It was then that Nji shared the experience of what had happened to her on the farm.

By this time, the news that she had been raped and was pregnant had spread throughout the community. The boy who raped her escaped to another village, and no one in Nji’s village has seen him since. Soon after, she gave birth to her first son.

Doctors say that because false reports of rape are common, people who are raped must receive a medical examination to prove the rape occurred, in addition to necessary medical care. After confirmation from a doctor, they can then file a report with the police, who investigate the case and forward it to the justice system. But lawyers admit that few cases result in convictions here. Many cases also go unreported because of the stigma attached to rape, ties to perpetrators, skepticism of the people reporting the crime, and lack of financial and personal resources to pursue cases.

Reseau National Des Associations de Tantine, RENATA, a national network of more than 10,000 young, unwed mothers working against sexual violence, carried out a survey in 2009 on the incidence of rape in Cameroon, along with the German Technical Cooperation, now part of the German Society for International Cooperation, which supports the German government in international cooperation for sustainable development. According to the survey, 20 percent of the nearly 38,000 women surveyed reported having been raped. Another 14 percent said they had escaped a rape attempt. The survey found that most people who are raped know their perpetrators.

Martin Sangnyuy, a police officer, says the police station where he works in the 3rd District of Bamenda, a city in northwestern Cameroon, receives a rape report at least once a month.

But authorities say that many reports are false.

Dr. Nji Peter has been the owner and resident medical officer at Family Foundation Clinic in Bamenda for 18 years. During this time, he says he has been able to confirm only one case of rape.

“I have quite a good number of young that come to this clinic with claims that they have been raped,” he says. “When we run our tests, we find out that it is not the case.”

He says that mothers usually bring daughters ages 5 to 10 into the clinic, saying the girls have been raped.

“When the girls are examined, we find out [there] may have been an attempt at rape but not rape,” he says.

As for teenage girls, Peter says that some of the girls come to the clinic for a sympathetic ear, pretending that they have been raped. He says he can determine whether a rape has occurred from a medical examination, though how he discerns rape from attempted rape is not clear.

“Some of them come to our clinics already pregnant,” he says. “And when they make a claim that they have been raped, most times our examinations prove otherwise.”

Peter says the one rape he was able to confirm occurred seven years ago. The girl was 16. After confirming the incident through an examination, he says he tested her for pregnancy, HIV and other sexually transmitted diseases. The tests came back negative, and the girl asked him not to inform her parents.

In addition to running these tests after an examination confirms the rape occurred, doctors put girls and women on emergency contraceptives to prevent pregnancy and post-exposure prophylaxis, a short-term antiretroviral treatment, to prevent HIV.

But advocates say the reality of confirming one rape case in 18 years is unrealistic. According to the U.N. Commission on the Status of Women, one in three women is sexually abused in her lifetime. What’s more, the culture of shame and skepticism that surrounds rape increases the chance that people won’t come, according to a World Health Organization study on women’s health and domestic violence.

Women who become pregnant as a result of rape can obtain a government waiver to obtain an abortion, which is usually illegal in Cameroon. Doctors also issue a medical certificate to prove the rape occurred, which can be taken to the police to report the incident.

But Peter says that public hospitals don’t always follow the protocol for handling rape cases. He says that usually the nurses there just put people who have been raped on antibiotics and send them home. This falls short of the ideal procedure, he says.

According to the Cameroon Penal Code, “Whoever by force or moral ascendancy compels any female, whether above or below the age of puberty to have sexual intercourse with him shall be punished with imprisonment for from five to ten years.” The sentence is increased to 15 to 25 years when the person raped is younger than 16, even if she consents, or up to life in prison if the offender has authority over the person raped, is a public servant or religion minister or was assisted by others.

Marital rape is not illegal as long as the marriage was freely consented to between the rapist and the person who was raped and if the person raped was of age was of age.

When people come to the police station to report a rape, the police first refer them to the hospital for a medical examination. Sangnyuy says that the hospital records determine whether a girl has actually been raped.

“Sometimes girls can blow a false alarm that they were raped when it’s untrue,” he says.

When someone comes to the police station with the medical report, the police search for the perpetrator, he says. The police forward the case to the state counsel and then to the courts.

Bong A. Divine is a lawyer with Monie Wakai & Associates Law Firm in Bamenda. During the nine years that he has practiced law, he has handled three rape cases.

The most recent case he defended was last year. He says his client, a 23-year-old woman, reported her case a couple of hours after the incident. Following the protocol that lawyers observe in their practice, Divine says that once he received the complaint, he set out to gather information and evidence. This included asking the woman about the circumstances and her reaction and obtaining a medical report to confirm that the rape occurred.

Next, Divine says he filed a formal complaint to the state counsel for the alleged culprit to be apprehended. He says the case was tried in court, and the culprit was found guilty and sentenced to three years in jail. Divine says that this is the only rape case he has handled that proceeded to the end and resulted in a sentencing of the defendant.

”My client was lucky, and she benefited from the empathy of the presiding judge, police investigator and prosecutor, who all happened to be women,” Divine says.

But Divine says that most people don’t usually report rape incidents. He says this is the result of many reasons, including poverty.

“Most victims are poor and can’t afford lawyers’ fees,” he says. “Averagely, lawyers charge 150,000 francs CFA [$300], and the amount could be more if the case is adjourned repeatedly.”

But he says that most times, people can seek a sponsor or sympathizer to pay the lawyers’ fees for them.

Of the 33 cases of rape reported to the Bamenda High Court between 2004 and 2007, just two resulted in sentences, according to a 2009 analysis supervised by RENATA and published by German Technical Cooperation.

Sangnyuy says that the protocol for reporting is effective, but that many times the rapists escape after the act and can’t be brought to justice. Also, when the rapist is a family member or friend, he says the cases rarely reach the police because families guard the secret and settle the problem within their family circles.

Beryl, 31, a secondary school teacher who declined to give her last name, says she has guarded the secret that she was raped by her colleague. She says this is the first time she has told anyone about it.

She and her colleague had been having dinner at her apartment. After dinner, he forced himself on her despite her desperate pleas for him to stop.

She says she had bruises around her vagina. She bought nonprescription drugs from a roadside drugstore because she did not want to go to a hospital. She did not report the case and has kept it a secret.

“I feel it’s pointless to report the case,” she says. “No one will believe me. Also, I don’t have the strength nor extra money to follow up the case.”

Her countenance gets dull, and there is a blank stare in her eyes as she speaks. She says the incident, which happened nearly a year ago, still causes her pain. She says she now considers all men with contempt and doesn’t dream of ever getting married.

Taku says that RENATA educates its members about their sexual rights and advocates for the respect of these rights. The association has a special unit that focuses on rape.

“Some of our members – young unwed mothers – had their babies from rape incidences,” she says.

The unit’s main campaign against rape from 2009 to date has been raising awareness that rape is a crime and people must denounce rapists.

“We have made much progress through this campaign,” she says. “Silence by rape victims is being broken. We have more victims calling our SOS Rape hotline for counseling and help. Our helpline is available 24/7.”

Jacinta Tete, 31, is a member of RENATA. She says she was first raped at the age of 4. Through RENATA, she teaches kids in nursery and primary school about their bodies, introduces gender knowledge to them and speaks about preventing gender-based violence. She also encourages people to speak out, seek justice and put an end to rape.

Beryl says that opening up to share her story for the first time since it happened makes her feel lighter on the inside.