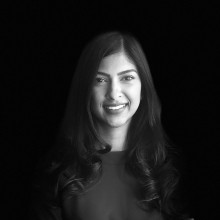 Laxmi Parthasarathy is the chief operating officer of Global Press. She leads global operations across each Global Press brand, spearheads the global expansion strategy to build new bureaus, and develops new partnership strategies to bolster the organization’s reach and long-term sustainability. Over her career, she has led initiatives at the intersection of media and development in Canada, India, Rwanda, Mexico, Spain, Argentina and the UK. In 2019, Laxmi was appointed a Pierre Elliott Trudeau Foundation Mentor.

Laxmi served as Director of Global Media Partnerships and Change Leader at Ashoka, the world’s largest association of social entrepreneurs. Over her seven years at Ashoka, she led the organization through a major strategic shift and forged deep partnerships with leading media outlets around the world. She is the author of the University of Michigan report, “The Bottom-Up Media Revolution: How Social Entrepreneurs Are Building Trust Between Communities and the Media,” which analyzed data on 200 media innovators across 22 countries.

Previously, Laxmi worked in Swaziland as the communications leader for the country’s only gender-based violence prevention NGO, where she orchestrated a national effort to successfully campaign for the Children’s Protection and Welfare Bill and Sexual Offences and Domestic Violence Bill and co-produced a national radio program providing support to survivors of sexual assault. Laxmi is also the founder of “My Roots”, a Toronto-based media start-up and quarterly print publication that achieved a circulation of over 5,000 and was distributed across Toronto public and private schools.

From 2013 to 2018, Laxmi served on the board of Crossroads International, a leading Canadian international development organization, concluding as vice-chair. She has lectured widely on social entrepreneurship, media development and the future of journalism, including at Harvard, Oxford, and Georgetown University. Laxmi holds a Master’s degree in Media, Communications and Development from the London School of Economics and did her undergraduate studies at Carleton University, where she was named one of Canada’s Top 20 under 20. She lives in Washington, D.C.