Skip to main content
The story you are reading was published on Wednesday August 6, 2014. To read more recent stories click here. 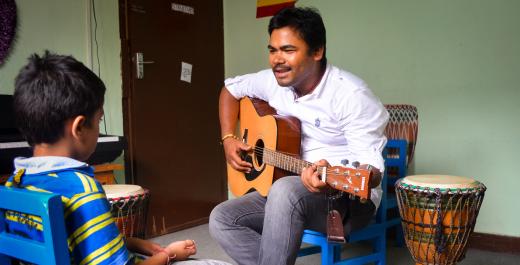 KATHMANDU, NEPAL – The walls of a small, brightly lit room are decorated with colorful musical instruments. A guitar is stored in one corner of the room. In another, a keyboard lies on the floor. A table against the wall holds a flute and two traditional Nepalese drums, a tabla and a madal.

Maulik Bhandari, 7, slowly steps into the room, looking down at his feet and gripping his mother’s hand. He shows no interest in the instruments or the man seated on a stool in the room.

But when the man begins to strum the guitar, Maulik’s eyes light up. He instantly lets go of his mother’s hand and moves toward the man.

Maulik is beginning his daily music therapy session at the day care center run by AutismCare Nepal, the first organization to provide music therapy for people with autism, in Kathmandu, Nepal’s capital.

Within a few minutes, Maulik is singing his favorite English nursery rhyme, “Twinkle, Twinkle, Little Star.” He keeps up with the melody and enunciates the occasional word. Moving in rhythm with the music, he points skyward whenever the song mentions the star.

Maulik’s mother, Alina Bhandari, 33, takes him to the day care center each day, traveling by bus for more than an hour from their home in Lalitpur, a district adjoining Kathmandu district.

Before he began therapy in April 2013, Maulik used to hit people, Bhandari says. He could not sit still or communicate basic needs such as asking for food when he was hungry.

But from the time he began music therapy, Maulik has followed what is said to him and communicates his basic needs. Although he still does not speak in full sentences, he started using single words to communicate last January, Bhandari says.

“Music therapy has given a new life to my son,” she says. “He couldn’t speak at all, but now he has started communicating.”

AutismCare Nepal introduced music therapy for autistic children in Nepal in 2010. Parents and professionals working with autistic children say music therapy has helped children develop social and communication skills, reduce their aggression and focus their thoughts. The government aims to allocate funding for people with autism, and AutismCare Nepal plans to extend its services beyond Kathmandu.

There is no research available on autism in Nepal because it is a new area of disability studies for the government and scientific researchers, says Raj Kaji Prajapati, chief administrator of AutismCare Nepal.

But AutismCare Nepal estimates there are 200,000 to 300,000 children with autism in Nepal, based on a 2012 U.S. projection that one child in 88 has an autism-spectrum disorder, an umbrella term for a wide spectrum of neurobiological disorders.

The organization, which was formed in 2008 by a group of parents of autistic children, discovered the effectiveness of music therapy through Music Therapy Trust Nepal, Prajapati says. The groups continue to partner in developing music therapy programs at AutismCare Nepal, training new therapists and popularizing music therapy as a treatment for autism.

Since AutismCare Nepal began providing music therapy six years ago, it has reached about 400 autistic children in Nepal, he says. The group currently provides music therapy for 13 students.

Music therapy has become a popular treatment for autism in Kathmandu, says Kedar Gandhari, one of two music therapists who provide services through AutismCare Nepal.

“The effectiveness of music therapy has become common knowledge,” he says. “Other organizations have also started to work in collaboration with us. The demand for music therapy is increasing.”

Since AutismCare Nepal began providing music therapy, eight other organizations in Kathmandu have added it to their programs for children with autism.

For more than four years before they brought Maulik to AutismCare Nepal for treatment, Bhandari and her husband performed hundreds of pujas – Hindu prayer rituals – and visited many doctors seeking treatment for their son, Bhandari says.

The couple followed the advice of relatives, friends and neighbors in hopes of improving Maulik’s condition, Bhandari says.

“I believed everything people said and followed it with a hope that it would heal my son,” she says.

Before Maulik began therapy, he was unable to perform any task by himself, and he never acknowledged Bhandari’s presence.

But music therapy has brought about a transformation in Maulik, who spends one hour each day, six days a week, in music therapy as part of his comprehensive therapy program at the center.

“I am very happy to see the changes in my son,” Bhandari says. “With music therapy, he holds the end of my shawl whenever he sees me. Also, he can walk by himself, tell me when he wants to use the toilet, and he has started eating solid food.”

Bhandari aims to help Maulik become independent. The teachers at AutismCare Nepal have suggested that he continue his therapy for seven years, until he is 14.

Gandhari has seen hundreds of children react positively to music therapy, usually within six months to a year, depending on the severity of their autism.

“Music therapy increases communication, awareness and the social and emotional skills of patients with autism,” he says. “The behaviors of children are modified. They are taught to interact with their environment, which enables them to be part of society.”

Music therapy can also be used in various ways to treat young people and adults with autism, Gandhari says. While therapy for children generally combines music and dance, teenagers and young adults like romantic ballads, and adults have different musical preferences.

In therapy sessions, Gandhari encourages students to play the musical instruments and listen to the different tones they produce.

Popular Nepali instruments – including the madal, jhyali, tabla and sarangi – as well as the keyboard and flute work best in therapy, Gandhari says. Those instruments produce soothing sounds, and can be used to make music for dancing. Therapists also use the instruments to help students learn new words and actions.

Children enjoy music therapy because it is fun, says Dr. Merina Shrestha, an assistant professor of pediatrics at Tribhuvan University Teaching Hospital in Kathmandu and a medical consultant to AutismCare Nepal.

It engages children by giving them an opportunity to sing and perform activities. Autistic children have trouble integrating into society because they lack social and communication skills, Shrestha says.

“People with autism have problems in social interaction, communication, and they show repetitive behavior,” she says. “Music therapy is effective in problems related to socialization and communication.”

Buddhiman Gandharba has experienced the isolation of autistic children firsthand.

His eldest child, Bishal, 11, was diagnosed with autism in 2013 when Gandharba brought him to AutismCare Nepal for testing.

People in their village, located in Lamjung district, see his son as different from other children, Gandharba says. Acting out of misunderstanding and entrenched religious beliefs, villagers have subjected the family to humiliation.

“I have been told many times that my son’s illness is the result of sin in my previous lives,” he says. “So I do not talk about my son. I keep him inside a room when we have visitors.”

Gandharba brought his son to Kathmandu in hopes of finding some treatment that would improve his condition.

When he learned that the monthly fee for education and therapy at AutismCare Nepal is 5,400 rupees ($56) a month, he reluctantly took his son back to the village.

Gandharba earns only about 300 rupees ($3) a day as a street singer in Kathmandu, he says. He supports his family with these earnings and could not spare any money for his son’s treatment. But he has started saving money so his son can receive music therapy at AutismCare Nepal.

“It is difficult to reach every child with autism due to financial constraints,” Gandhari says. “We have provided free services to a few people who couldn’t afford the treatment. But as the treatment is carried out for a long period, it is not possible to cover everyone.”

The music therapy services are currently limited to Kathmandu. Autism organizations are not able to provide therapy to children living out in the Kathmandu Valley, let alone remote villages in Nepal.

“We aim to provide free service in future if the government of Nepal or any donor agencies support us,” Gandhari says.

Padam Bahadur Chand, spokesman for the Ministry of Health and Population and chief of the ministry’s Policy Planning and International Cooperation Division, confirms that the Nepal government currently provides no funding to treat children with autism.

The government classifies autism as an intellectual disability, but people with autism do not receive the welfare benefits available to people with other disabilities.

“Autism is a problem that needs to be addressed, but as it is very new, we have not given it due attention,” Chand says.

In discussions with AutismCare Nepal representatives in 2013, officials from the Ministry of Health and Population promised to address the needs of autistic children in future government policies.

Chand confirms that the government is starting to take action.

“The government is in discussions regarding the education and social security of these children,” he says. “There will definitely be some programs during the coming years.”

AutismCare Nepal hopes to extend its services outside Kathmandu, to Pokhara and Chitwan towns, Prajapati says. The organization is raising funds to achieve that goal.

Meanwhile, it is working to raise awareness of autism, he says. The organization aims to reduce the stigma of autism and encourage more parents to have their children diagnosed early.

As part of its awareness program, AutismCare Nepal put on a series of street dramas last January and February in collaboration with Yuwalaya, a youth-led nongovernmental organization. The street dramas were all presented in districts outside the Kathmandu Valley.

Bhandari believes music therapy has been almost like finding a cure for her son.

“I am very happy to see the changes in my son after the music therapy,” she says. “Parents like me with children with autism should no longer be distressed by the lack of a cure.”