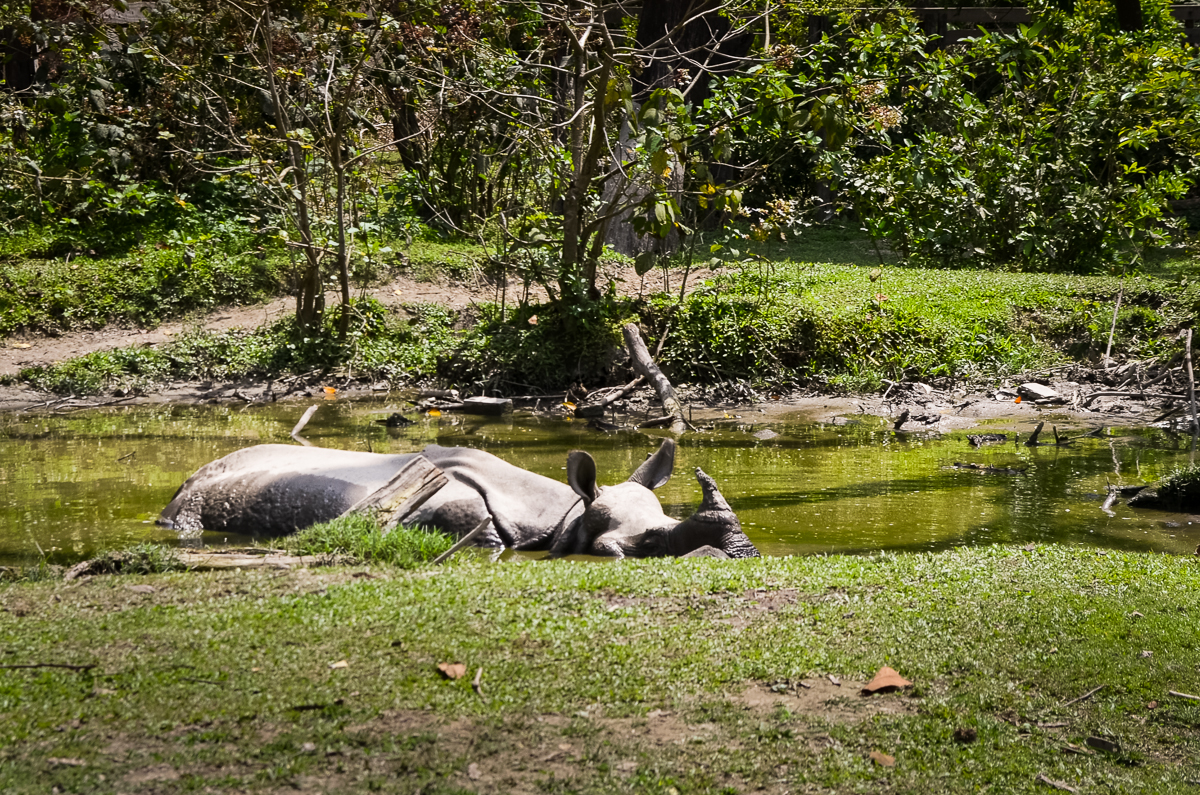 BARDIA, NEPAL — Daylight starts to filter through the thick tree cover at Bardia National Park when Laxmi Narayan Shah and five others begin their morning patrol.

Shah, 22, is a park ranger. This is the first of two extensive patrols he undertakes each day – one at daybreak and one at night. Armed with a stick, he sets the pace for the soldiers walking with him, treading softly but surely. This patrol will take about three hours. The group looks for signs that poachers or other trespassers have been in the park, in southwestern Nepal’s Bardia District.

The park is home to rhinoceroses and tigers – the animals most at risk for poaching in the Eastern Himalayas, according to the World Wildlife Fund, a global conservation organization.

“When I enter the forest for daily patrolling, I first check the tracks on the ground,” Shah says. “Depending on the tracks, I know if there is trespassing or illegal activities taking place inside the forest.”

Rhinoceroses once roamed freely in Africa and Asia, but now all five species of the massive animals are threatened, primarily because of poaching, reports WWF.

On the black market, rhino horns are worth more, by weight, than gold, diamonds and cocaine, according to research published in the journal Science. The horns are used in traditional Chinese medicine, as well as for ornamental carvings, according to the U.S. Fish and Wildlife Service’s Office of Law Enforcement.

No one else has achieved zero poaching. Nepal has proved that if you work together and if you work hard, it is achievable. — Anil Manandhar, country representative for WWF Nepal

Globally, rhinos are severely threatened. In South Africa, rhino poaching jumped by 9,000 percent between 2007 and 2014, according to WWF.

But in Nepal, the tide is turning. Not a single rhino has been poached in Bardia National Park, located in western Nepal along the border with India, in the past five years, Bhandari says.

Experts say that success is due to strict law enforcement, community involvement, and cooperation between various agencies.

“No one else has achieved zero poaching,” says Anil Manandhar, country representative of WWF Nepal. “Nepal has proved that if you work together and if you work hard, it is achievable.”

Nepal achieved “zero poaching” of an endangered animal, the first country in the world to do so, in 2011, after 365 days in which no rhinos were poached, Manandhar says.

WWF defines zero poaching as reducing poaching to such a negligible level that there are no visual signs of poaching and there is no impact on the species population, which is stable or increasing.

In the past five years, Nepal has had three periods of zero poaching of rhinos of more than 400 consecutive days, another global first, Manandhar says. This includes periods ending in 2011, 2014 and 2015. Nepal also achieved zero poaching for rhinos, tigers and elephants for a 12-month period ending in February 2014.

“Globally, the poaching trade is increasing,” says Tika Ram Adhikari, director general of the Department of National Parks and Wildlife Conservation in the Ministry of Forest and Soil Conservation. “And for a small country like Nepal to achieve zero poaching is outstanding.”

The last recorded rhino-poaching incident in Nepal was in early May 2014, says Maheshwar Dhakal, under secretary of the Department of National Parks and Wildlife Conservation.

Not only has Nepal stopped poaching of rhinos, it has also successfully increased their number.

A population count conducted in April and May in four wildlife parks in the country showed an increase of 21 percent in Nepal’s rhino population, Adhikari says. There are now 645 rhinos, compared with the last recorded count of 534 rhinos in 2011.

The outlook for Nepal’s rhinos wasn’t always bright. Less than a decade ago, experts feared that increased poaching could lead to the rhino’s extinction. Rhinos, tigers and leopards were among the endangered species that were at high risk in Nepal because of poaching, Manandhar says.

Authorities weren’t able to control poaching during the Maoist insurgency in Nepal, which raged between 1996 and 2006. Soldiers and armed guards were removed from their posts in national parks and assigned to military units to fight the insurgents, Dhakal says. The parks were left mostly unguarded, and poachers took advantage. 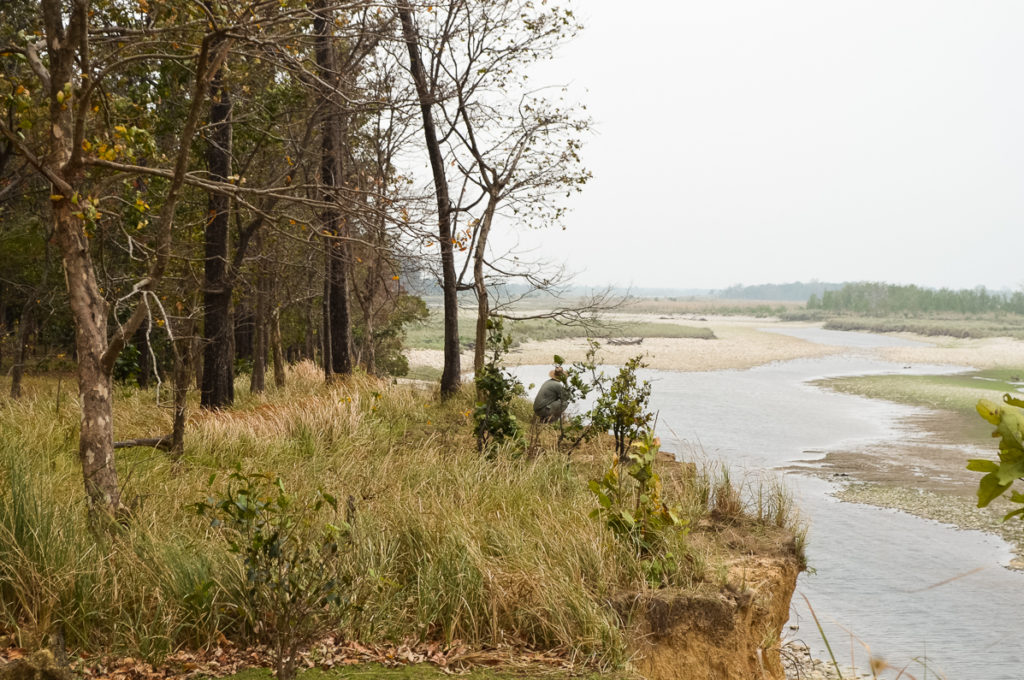 A guide looks for a rhinoceros along the bank of Karnali river in Bardia National Park. The park is home to endangered animals such as the Bengal tiger and the greater one-horned rhinoceros. 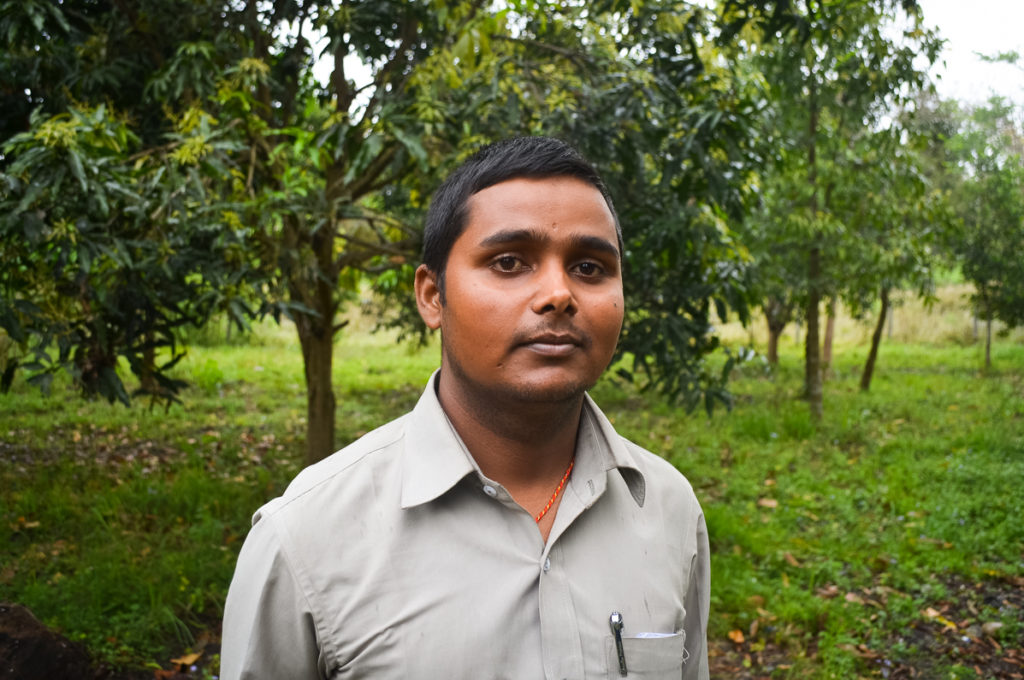 Laxmi Narayan Shah, 22, is a ranger at Bardia National Park. He patrols the park twice a day. 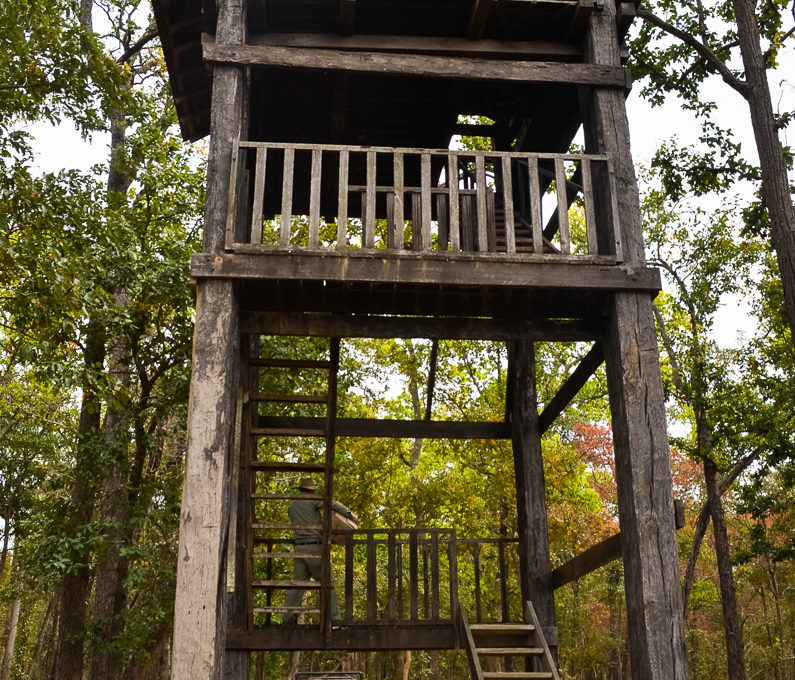 A group stands near a vehicle next to a viewing tower inside Barida National Park. Tourists can use the tower to sit and watch wildlife. At night, the tower is used by rangers and guards to keep an eye on activity inside the park. 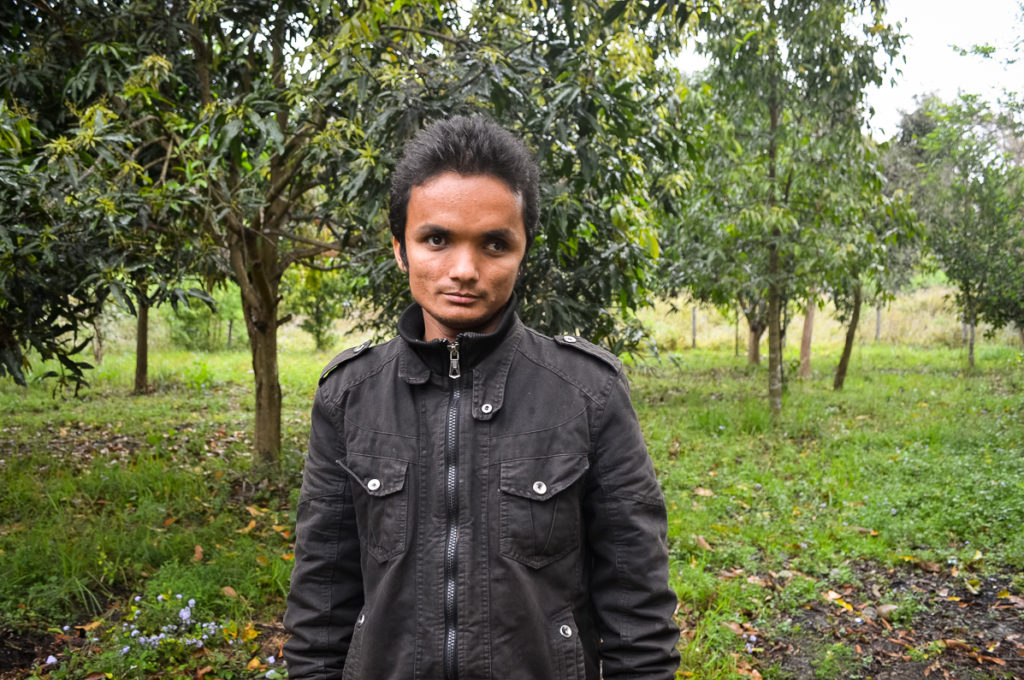 Rajendra Kumar Tiwari, 22, is one of more than 2,000 youth volunteers who report suspicious or illegal activities at Bardia National Park. 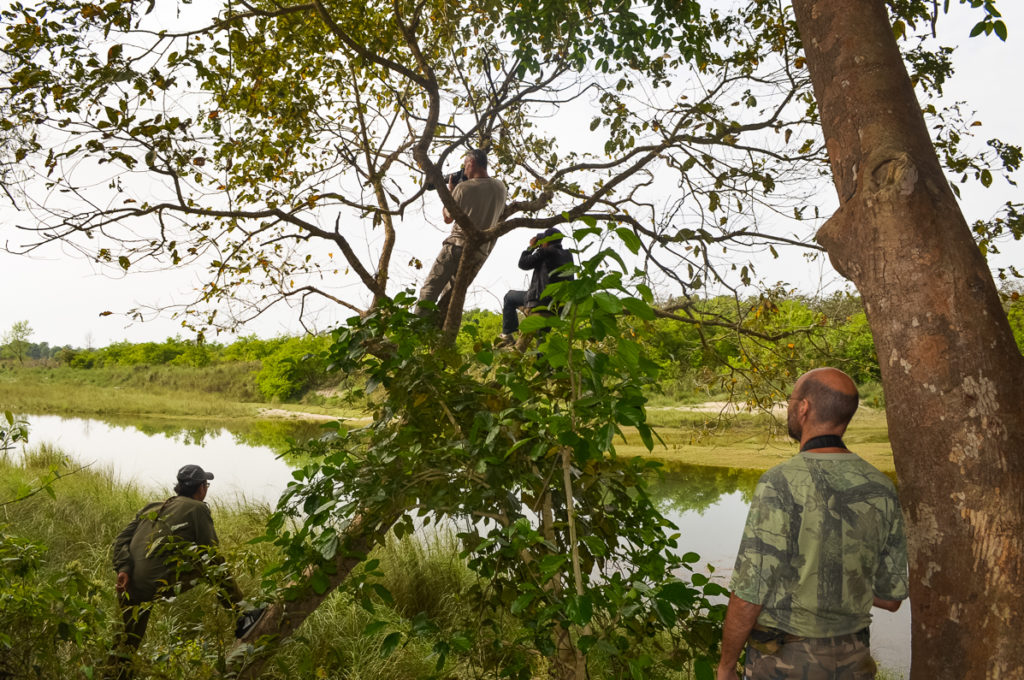 Tourists wait to get a glimpse of a greater one-horned rhinoceros in Bardia National Park.

Soon after the end of the Maoist conflict in Nepal, the government began to address the issues of poaching and conservation, Dhakal says. Government agencies, along with the Nepalese Army, Nepal Police, National Trust for Nature Conservation, WWF Nepal and local communities came together to protect wildlife in Nepal.

These days, Shah, along with hundreds of other park rangers and security personnel, is alert to any signs of poaching in Bardia National Park. He is among a team of about 800 people, including park staff and army personnel, who operate 32 guard posts and patrol the 968-square-kilometer (374-square-mile) park at regular intervals to prevent poaching.

Nearly a quarter of Nepal’s land has been designated as protected, an area of 34,186 square kilometers (13,199 square miles), according to the Ministry of Forest and Soil Conservation. This includes 10 national parks, three wildlife reserves, six conservation areas, one hunting reserve and 12 buffer zones.

At least 56 mammals and more than 400 species of birds and reptiles live in Bardia National Park, says Ashok Bhandari, assistant warden of the park. Among them are Bengal tigers, the greater one-horned rhinoceroses, elephants, swamp deer and blackbuck.

There are stately sal trees, and a mixture of grasslands and riverine forests, Bhandari says.

Bhandari says the number of security posts at Bardia have increased from 18 in the early 1990s to 32 in 2015, with 11 to 30 people operating one post. During the Maoist insurgency, the park had only four security posts.

The rangers and park staff use a Global Positioning System and SMART (Spatial Monitoring and Reporting Tool), which allow a centralized system to monitor and manage park activity through special software systems.

In March 2014, he saw unusual vehicle tracks and followed them to a Jeep with five armed men, all Nepalese. Two were hunters returning from an illegal hunt. They hadn’t found any prey.

Shah had to collect evidence for the legal action that followed. The hunters were fined and given a two-year prison sentence, which they paid an extra fine to avoid. The driver and local tracker were also fined.

The Department of National Parks and Wildlife Conservation, which manages Bardia National Park, filed 73 cases against poachers and illegal loggers in 2014, of which 47 have been heard in court to date.

The problem of trafficking of wildlife across borders was also addressed. Bilateral agreements with India and China tightened laws against moving poached animals.

The government also included the communities near the protected areas in its conservation plans. Creating buffer zones, which were managed by the villagers and the park rangers, was a first step. Park rangers and villagers have unrestricted access to buffer zones, and villagers are also allowed to sustainably harvest some of the forest resources there.

“Poachers mainly entered the park from the northern side,” he says. “After declaring the northern buffer zone, poachers now have no access to enter the park. Now that chain is broken.”

A Buffer Zone Management Committee was formed, consisting of park officials and village leaders, says Netra Raj Acharya, chairman of the committee. Half the park’s income is given to this committee for management, conservation and livelihood activities in the buffer zone. In 2014, this amounted to 5.45 million rupees ($51,240).

In 2010, park officials asked people in the northern villages to turn in all of their weapons, some of which may have been used in the past for hunting for subsistence. Around 250 types of weapons were given up voluntarily by the community, Bhandari says.

Education campaigns to encourage villagers to monitor and manage activities in the buffer zone, as well as new employment opportunities, discouraged villagers from poaching in the park, he says. The committee introduced income projects such as sustainable farming, animal husbandry and growing aromatic crops for sale.

Acharya says a sense of ownership has been created in communities so that they protect and conserve the park for future generations.

Around 2,000 youth volunteers who live in the buffer-zone villages have become important eyes and ears in monitoring poaching activities. They are trained to inform a specific ranger if they hear of any plans to carry out poaching or other illegal activities inside the park. And they are also community educators in preserving the park’s resources and wildlife.

Rajendra Kumar Tiwari, 22, is a youth volunteer who also teaches at the village school.

“We keep our eyes and ears open at all times,” he says. “When we are suspicious of any activities in our village, we contact Shah.”

The Buffer Zone Management Committee discovered that human-wildlife conflict in the area, which led to animals being shot or attacked by villagers, was caused by animals searching for food and water outside their natural habitat. So the park staff have restored grasslands and created more watering holes inside the park.

“This way, animals will have food and water inside the forest, and they will not come out of the forest,” Bhandari says.

Local efforts have been successful, but they can only go so far to reduce poaching. In February, the government of Nepal hosted a conference in Kathmandu, Nepal’s capital, titled “Symposium: Toward Zero Poaching in Asia” that brought together 13 Asian countries to discuss issues of wildlife crimes and to learn from Nepal’s experience of achieving zero poaching.

Adhikari says the government plans to increase pressure on organized trafficking groups by signing an agreement with Interpol to investigate wildlife crimes. Interpol is the world’s largest international police organization, and the agreement is expected to be signed before the end of 2015.

Manandhar says that as long as there is demand for poached products, the supply of poached animals will continue.

“We have to stop the demand to bring down poaching,” he says. “If there is a demand, poaching will continue.”

But the world can learn from Nepal’s zero-poaching achievement, Manandhar says.

“We have shown that it can be achieved,” he says. “It is not easy and needs combined effort. But Nepal has proved that zero poaching is achievable.”